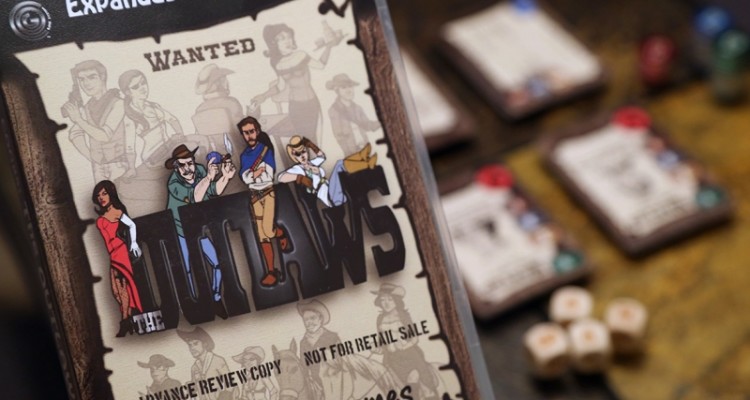 Howdy y’all! Ok, that’s as much cowboy-talk as I can muster. But if you’re a fan of 10-gallon hats, colt 6-shooters, and half-drunk grandmas pulling off train robberies, get ready for The Outlaws. Strap on some spurs and prepare to out-heist your fellow hooligans in an attempt to become the best-known baddie ‘round these parts.

The Outlaws, from creators Shea Looijen and Kristi Uhles of Bibelot Games, is a “euro-style card game” for 1-4 players. Through a combination of card and dice play, players will compete to assemble a hodge-podge posse of wild west personalities and send them on jobs to gain cash and reputation. These resources will help you recruit new outlaws and gain more reputation, ultimately leading you to become known as the roughest and toughest bandit around. That is, if you can survive the shootouts.

As you crack the game box, the first thing you’ll notice is a custom foam insert, etched with The Outlaws, four custom etched wooden dice, a tube of anodized aluminum chits and a deck of 54 cards. Whew! Talk about a first impression. No shrink wrap or plastic baggies. Just beautifully made components sitting nicely in their own little cubbies. The rulebook is similarly well made, with a nice combination of entertaining wild-west fluff and very simple, bullet-pointed rules. The rules are easily simplified to one page (featured at the end of the book), but Bibelot Games took the time to provide nice half-page drawings, full-page diagrams, and thorough explanations. 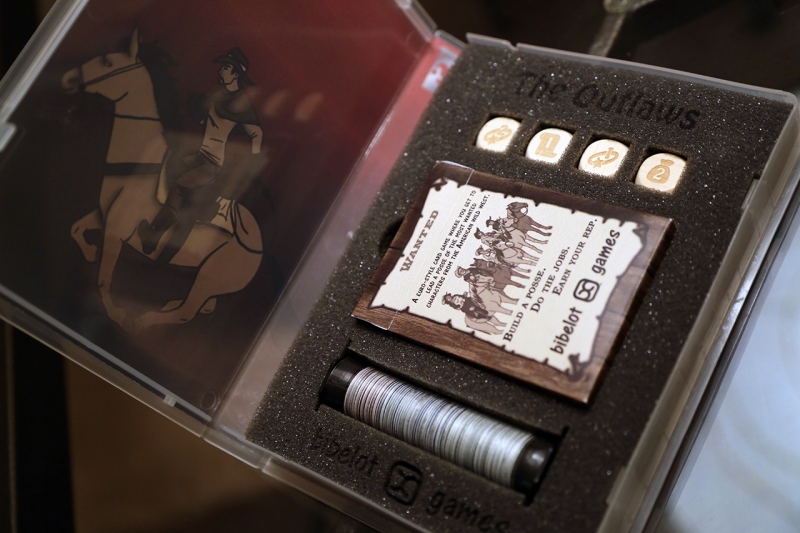 Top-notch components aside, the gameplay is quite simple and reminded us mostly of The Builders, another small-box euro-style card game. On your turn, you either recruit a new outlaw or send those currently employed on a job. Each outlaw has three separate ability stats, and the total combination of your outlaws’ Smarts, Power, and Will must equal those required by the job, before it can be attempted. When sending your Outlaws out on a job, roll a number of dice equal to the job’s “Risk” and reap the rewards of the roll – either cash, rep, or wounds. Have the most rep at the end of the game and you win!

Looking at little closer at the gameplay described above, the game begins by shuffling all of the cards into 6 separate decks. These will make up “Main Street” and will offer the outlaws and jobs available to recruit. Each player begins with 12 loot.

On your turn, you have three options:

The game is played in this manner until all of the draw decks are empty. At which point, whichever gang leader (player) has the most rep wins! 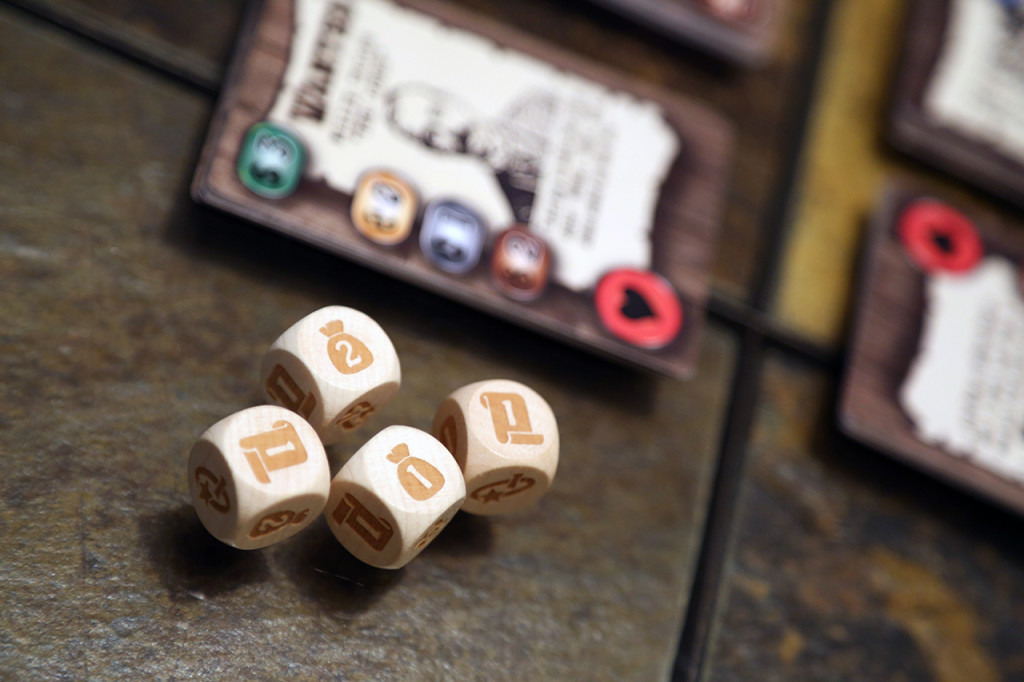 When first cracking open the rulebook of The Outlaws, I did what I usually do with new games: I gave quick consideration to who in our (7 member) game group would find this game most appealing. From family to high-strategy games; “Euro” to “Ameritrash,” we have a League member that can fit the bill. More importantly, the great thing about each League member is that they will always give a game a shot, even if they know it’s not up their alley. After getting The Outlaws to the table with 6 out of 7, we’ve found that this may be one game that doesn’t quite fit any of our tastes. 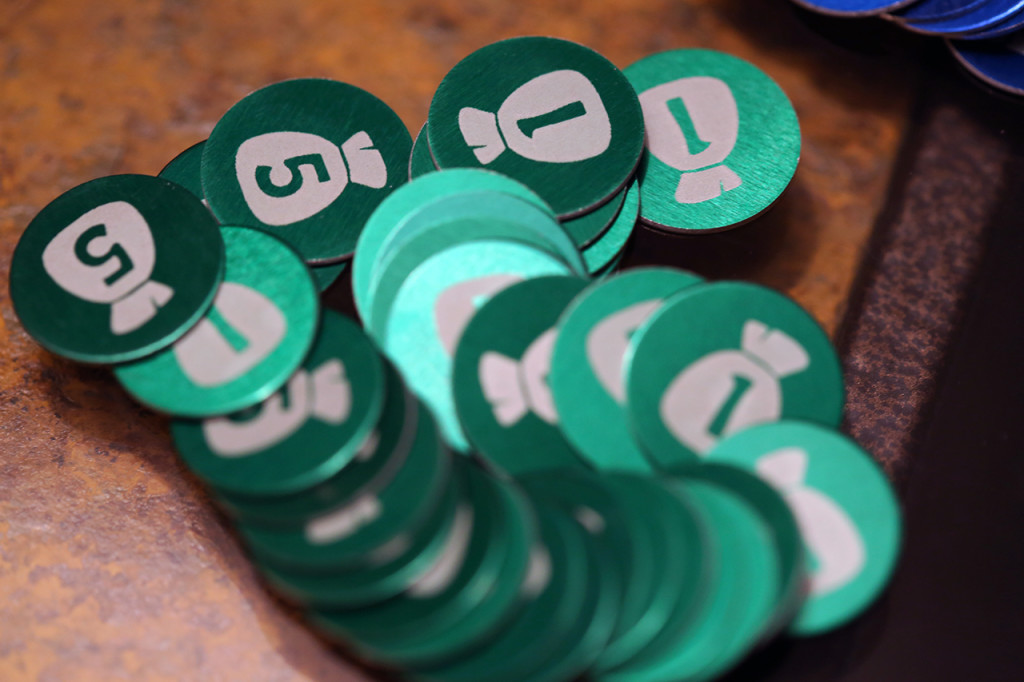 Our primary concern with The Outlaws is how light the gameplay is, meaning the very limited range of options you have on a given turn, and how much of that gameplay is a result of randomness that cannot be controlled or mitigated. Too often, due to the random distribution of the Main Street decks, at least one player (if not more) found themselves being unable to recruit an outlaw or attempt a job. Now, it is commendable that the “Report a Tip” action exists, as at least you get to do something, but believe me when I say it’s not much. Outside of hiring recruits, money is worthless in the game—it cannot be used to buy extra dice, change rolls, steal from other players, or even buy reputation. Ending the game with loads of cash is great, until you realize it actually isn’t.

I admit that reporting a tip could possibly be used as a “take that” tactic for blocking players, but in the off chance that it actually has the intended effect, it still doesn’t actually propel you forward. Additionally, it likely won’t set your opponent too far back.

Those lovely custom-etched dice are also a double-sided sword; they’re such beautiful dice! But good luck getting them to do what you want. Remember that player who was unable to do anything but “Report a Tip” all game? Well, the guy sitting next to him was doing jobs every turn, but don’t worry, he didn’t win either. He kept rolling wounds and loot! The fact that the only way to get the game-winning reputation points is by rolling them means that, really, instead of playing The Outlaws, you could just as easily see who could roll a “6” the most times in a minute. 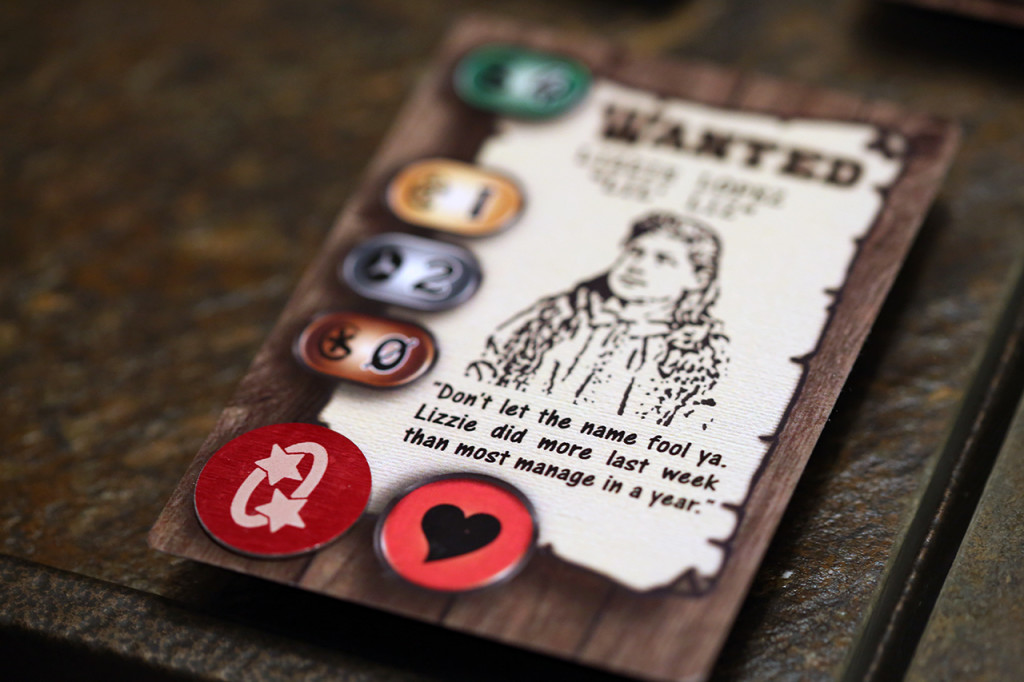 To be fair, though, there is an audience out there for this game. For some strange reason, as we sat there critiquing The Outlaws and thinking of our preferred changes, we still…had fun. In some strange way, although we don’t find The Outlaws to be particularly interesting from the standpoint of a game, we still kept playing it. And laughed – mostly at each other, but also at the flavor text on the cards and the general silliness of the game. In the sense that The Outlaws fostered a positive social interaction within our group, it is a fun game. It’s also super easy to explain and did we mention the components are fantastic?

The simple fact though is that, while The Outlaws has a lot of good things going for it, it’s still a few good heists short of being Butch Cassidy or Billy the Kid quality. We would love to see some alternative options for using the loot, maybe some variable outlaw powers, or some way to interact with the dice to make reputation a little more likely. A few tweaks could really make this into something worth playing; it could be an excellent gateway or filler game if there was a bit more here.

I want to like The Outlaws. Kelly B! and I have talked at length this past week about things that we would change to make it great. I feel as though there have been other games that I’ve simply wrote-off, never to consider again. This one though, is almost there and it’s a shame that this little card game doesn’t offer its players just a little bit more in terms of gameplay choices.

For very casual gamers or those looking for a gift for a non-gamer, The Outlaws could be an option. It plays quick and is very, very easy to teach. However, it is a game that, even if you enjoy it, can be graduated from so quickly because there are a number of other similar options that provide another level of “game.” Maybe we’ll house-rule some features and give this one another shot, but as it stands, it will likely fall below some of our other options.

Before I was even introduced to this game, I was warned that I’d hate it, so take this with a grain of salt if needed. One of the cardinal sins of game design, I feel, is leaving a player without anything to do on their turn, and I spent the majority of my first game with absolutely nothing to do. After recruiting a pair of Outlaws, and being unable to qualify for any of the available jobs, there was a (long) period of time in which I could do nothing but report a tip and watch as my three opponents took advantage of the revealed cards to actually play the game.

My second time through was better in that I was able to take on, and survive, a job or two, but I would still only recommend The Outlaws for players who can laugh at their own (and others’) misfortune. The game, I feel, would be better served by providing some reward along with the risk of doing a job, perhaps by having a particular job be worth a set amount of Reputation and/or Loot and have the dice only be used for wounds, or through some other mechanic where the results are not entirely left to the luck of the roll. As a result, I can only award The Outlaws half a thumb in the Casual category.

Let me start out by saying the components of this game are so excellent! While Buns was explaining the rules, all I wanted to do was play with the shiny, little tokens. Anyway, I struggle with this game. Buns mentioned in the review that we enjoyed ourselves every time we played this game, and that’s true. However, I don’t know how much I actually liked it. There weren’t many times that I found myself unable to do anything, but there were plenty of instances in which I just rolled wounds. I think it is a detriment to this game that players are rewarded for completing jobs with only a 1-in-3 chance of reward (by which I mean Reps, which are actually how you win the game). This game is so close, but I think it needs some tweaks before it’s gonna jump up my playlist.

To reiterate what the other League members have mentioned, the components of this game are topnotch. The gameplay and theme go together very well. I did actually enjoy the game in some respects and the flavor text was amusing. It actually does feel like you’re trying to hire the best posse you can to complete different jobs and heists. There just seems to be something missing to really push this over the top. It may just need more cards and/or separate decks for people to hire and jobs to complete. The artwork on the cards needs to be reworked to match the quality and theme better. (I know that this is a stretch goal on the Kickstarter and it would be beneficial for this game if they can hit that goal.) Of the 2 games I played, there was always someone just sitting with a great group of posse members, but no jobs to complete. Maybe there needs to be an action that allows you to reserve a job, as well. I feel that this game is a good game night-opener as is. And The Outlaws caters to new and non-gamers, but it could turn a lot of people off if they are just sitting there not actually participating in the game.

The League of Nonsensical Gamers would like to thank Bibelot Games for kindly providing us with a prototype of The Outlaws for this preview.

The Outlaws is currently funding over on Kickstarter. If this game piques your interests, head on over to the campaign page by Aug 20, 2014   to claim and control your own copy. For $36, you receive a copy of the game along with all reached stretch goals.