Stronghold in the drivers seat in 2014

Stronghold Games announced last week another big board game release in 2014, Kanban: Automotive Revolution, from Vital Lacerda (Vinhos and CO2).  Kanban is a resource management and economic strategy game centered on the revolutionary automobile manufacturing processes of the 1970s. 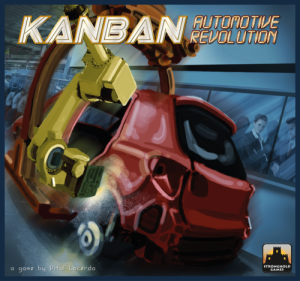 In Kanban: Automotive Revolution, players represent ambitious workers in an automobile manufacturing facility. You will work to impress the company’s management team, including the factory manager, CEO and board of directors via execution of an efficient manufacturing process. Managing of logistics and supplies, designing innovative technology enhancements, and exercising good judgement in the projects undertaken are crucial to your success and promotion within the company. Kanban is a game with multiple paths to victory that will reward strategic planning and timely execution.

Like the process itself, Kanban: Automotive Revolution will prove to be both innovative and rewarding. Game mechanics, which are tightly tied to the automobile manufacturing theme, include:

First the Panamax announcement, now Kanban.  Stronghold Games is working hard in 2014 to bring us some new and innovative titles.

Bézier Games announced two new titles last week; the first one is Subdivision, a tile-laying game reminiscent of their critically acclaimed city-building game Suburbia.  In Subdivision however, players will be tasked with building on a smaller scale. Each player will construct a neighborhood filled with residential, commercial, industrial, civic and luxury zones while combining and balancing various improvements to the area (roads, schools, parks, etc).  Gameplay is briefly describe on Bézier Games’ website: 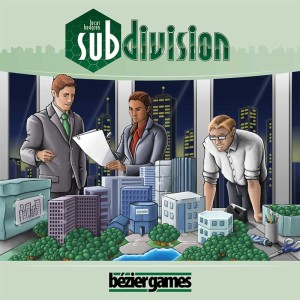 In the game, each player starts with a subdivision player board and a hand of hex-shaped zone tiles. A parcel die is rolled to indicate the type of parcel where a zone tile may be placed, and all players simultaneously place one of their tiles. If a zone tile is placed next to existing zone tiles, those existing tiles have the ability to create new improvements, which may also be placed at this time. Those improvements provide money and points, while slowly covering up as many parcels as possible. Players pass the remaining zone tiles in hand to their left, then someone rolls the parcel die once again. This continues until only one zone tile remains in hand, which is discarded.

Players then play another round, but at the start of the second, third, and fourth rounds, players first check to see whether they’ve achieved bonuses, which give them extra cash or allow for extra activations of certain zone tiles.

After four rounds, the game ends, and scores are tallied, with players gaining points for parks being adjacent to other tiles, sidewalks passing through as many different zones and improvements as possible, schools ranking the best in the city, and zones connecting to the highway that runs around (or through) your subdivision.

Pre-orders ($49.99) can now be placed through Bézier Games website and look to be available for GenCon 2014 this August.

The second title announced from Bézier Games was Castles of Mad King Ludwig. This one is also a tile-laying game but, instead of building a city, players are tasked with constructing a castle for the King Ludwig II of Bavaria, the same guy who built the Neuschwanstein (think Disney princess). So, no pressure!

In the game, each player starts with a simple foyer. One player takes on the role of the Master Builder, and that player sets prices for a set of rooms that can be purchased by the other players, with him getting 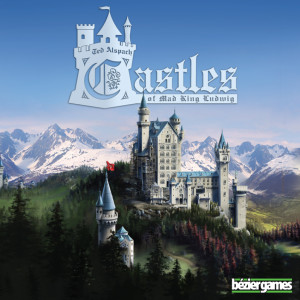 to pick from the leftovers after the other players have paid him for their rooms. When a room is added to a castle, the player who built it gains castle points based on the size and type of room constructed, as well as bonus points based on the location of the room. When a room is completed, with all entranceways leading to other rooms in the castle, the player receives one of seven special rewards.

After each purchasing round, a new player becomes the Master Builder who sets prices for a new set of rooms. After several rounds, the game ends, then additional points are awarded for achieving bonus goals, having the most popular rooms, and being the most responsive to the King’s demands, which change each game. Whoever ends up with the most castle points wins.

Tile-laying games tickle my fancy so both of these titles will be making their way to my wish list.  Like Subdivision, pre-orders for Castles of Mad King Ludwig ($59.99) are currently open on Bézier Games website and look to be ready in time for Essen in October 2014.

The Truth is in the cardboard 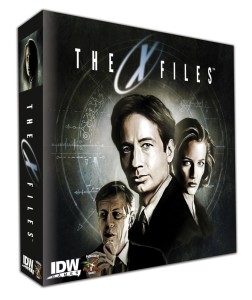 IDW also announced a couple of interesting titles this week on their website.  First up is the cult classic, truth-searching, The X-Files big box board game. Two to five fans of the show will be delighted to take on the role of Mulder, Scully, and the rest of the X-Files team to tackle the global conspiracies and threats posed by the Smoking Man and his evil network (who will be played by one of your friends). Knowing that IP titles can be hit or miss, IDW seems to be pulling no punches by bringing in game designer Kevin Wilson (Arkham Horror, Descent, Civilization) and comic book artist menton3 to provide art direction.

IDW Games will release The X-Files game in July 2014 with a suggested retail price of $59.99. For more details check out IDW’s website. 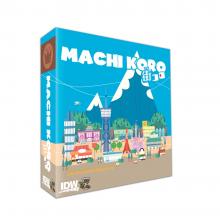 Another new release announced from IDW is the small box Japanese hit card game, Machi Koro. I really enjoy city building games and I am really starting to love Japanese small box games so I have been eagerly awaiting US distribution for this little title that made a big splash at Essen last year. It’s great to see that IDW will be bringing it to those of us here that have been yearning for it.  This fast paced light-hearted game pits 2-4 players against each other in a bid to collect income and build public works to turn your little village into a thriving metropolis. The game will retail for $29.99 and be released in July 2014.  For more details check out the post on IDW’s website.

Pocket Aces for the win 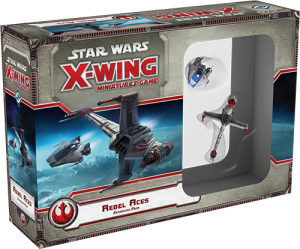 Damn you, Fantasy Flight Games (FFG), for putting out more awesome news this week that will send my budget into disarray. Hot off the heels of the Imperial Squadron receiving their Aces, FFG looks to right the balance of the force and level the playing field against the Galactic Empire by announcing the Rebel Aces Expansion Pack for X-Wing. Rebel Aces will feature two alternate paint scheme ships: one A-Wing and one B-Wing.  In the expansion pack, players will also find four highly skilled unique, new pilots, thirteen upgrade cards, maneuver dials, and the new Jump to Subspace mission. Look for the Rebel Aces to fly on to your shelf in the 3rd Quarter of 2014. 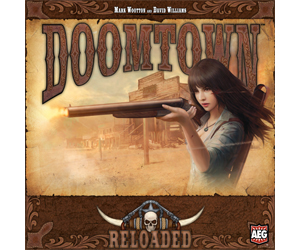 AEG announced last week that they would be bringing back the classic Dave William’s collectible card game, Deadlands: Doomtown, in the form of Doomtown: Reloaded. In Doomtown, in order to accentuate the atmosphere of the Old West, players will utilize poker hands and card draws for everything from gunfights to summoning creatures. Whats even more interesting/exciting is that AEG appears set to utilize an expandable card format similar to FFG’s living card games to bring back a newly re-imagined version of this fast paced gun slingin’ title. Death to the CCG! Erm, I digress.  For more details check out AEG’s Doomtown website.  Look for Doomtown: Reloaded to hit shelves this August.