Stronghold No Longer a Mysterium to the Raiders 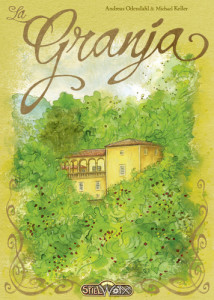 New Recruits to the Stronghold

Stronghold Games announced that they will be teaming up with German publisher Spielworxx to bring Age of Reason (Martin Wallace) and  La Granja (Michael Keller and Andreas Odendahl) to the U.S. Market in Spring 2015. This is exciting news as Stronghold Games continues to churn out solid euro-style games for fans around the world.  From the press release:

Age of Reason is for 3 to 7 players and is set in the latter half of the 18th century. Players take on the roles of regents for Great Britain, the Netherlands, France, Spain, Prussia, Austria and Russia, who want to increase their home country’s power in Europe while simultaneously establishing colonial empires in Africa, India and the Western Hemisphere. One country working on its own will not be able to achieve its goals, so players must take part in ever-shifting alliances, with whose help they hope to achieve their plans, or at least stave off direct conflict with a potential enemy.

La Granja is for 1 to 4 players who control small farms by the Alpich Pond near the Village of Esporles on Mallorca. During the course of the game, the players try to steadily expand their farms into the mighty country estate, La Granja, while also seeking to deliver goods to the village. In this game, speed is critical to success. La Granja is a game that requires careful planning, while learning to cope with the uncertainty of some card play. The player who has earned the most victory points at the end of the game is the winner and new owner of the La Granja estate.

Both Age of Reason and La Granja have tentative release dates of June 2015, and will have an MSRP of $59.95. Look for both titles to go on pre-order sale in April.

No longer a mystery

Asmodee has announced that they will be releasing Mysterium, the cooperative deduction game that has been referred to as “Clue meets Dixit,” at Gen Con 2015. Why will it take so long to release a game that has already been printed in numerous languages and contains…no language? Well, the Asmodee version will have all new art and reworked game play to make the experience even better. I recently played my newly acquired copy (Thanks Tiff!) and I thoroughly enjoyed myself. 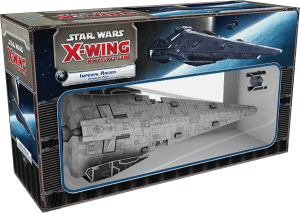 Fantasy Flight Games teased the newest addition to the X-Wing line: The Imperial Raider. Dark Side players will rejoice that they finally have an Imperial match for the Rebel Corellian CR90 Corvette. Its origins of are particular interest as FFG worked with Lucasfilm Ltd. to create the new Imperial Raider from scratch. From the Press Release:

Before we even announced the Tantive IV™ Expansion Pack, we knew Imperial players would need a comparable ship to lead their fleets in the game’s Epic Play battles. But none of the ships within the established IP and extended universe quite fit the bill. As we looked at ships that were larger than the VT-49 Decimator, the next possibility was the Lancer-class frigate at 250m; however, that was larger than we wanted for the scope of the game. Moreover, it didn’t quite fit the desired role, so we worked with Lucasfilm Ltd. and drew upon existing materials to create a new starship that fit seamlessly into the aesthetics and background of the Star Wars universe.

In addition to the Raider-class corvette, the Imperial Raider expansion pack also contains one TIE Advanced miniature with a variant paint scheme, a new campaign mission, eight ship cards, thirty-four upgrade cards, and all the maneuver dials, damage decks, tokens, and game pieces that you need to fly your Raider right off the game board (that may just be me). Look for the Imperial Raider to hit shelves in the first quarter of 2015. 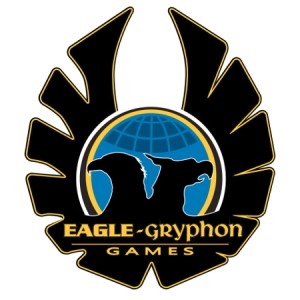 Eagle Games and Gryphon Games have announced that they will eliminate any confusion as to whether they really are a couple and merge to become one company: Eagle Gryphon Games. Also announced was the EGG Series, a series of small box games that they will be releasing starting with the recent Kickstarter successes Eggs and Empires (#1) and 12 days of Christmas (#2) and following up with King’s Kilt (#3, Gord Hamilton, with players trying to place their clan members on positions of power), Krakatoa (#4, a new version of a Joli Quentin Kansil dice game), Dexicon (#5, a deck-building word game by Andrew Rowse), and Seven 7s (#7, a quick-playing card game designed around collections of 7 by Jason Tagmire).

Schools out in the summer? 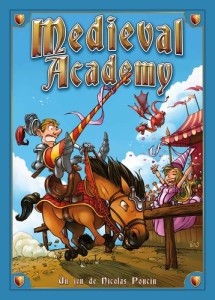 On Part 1 of the Dice Tower’s End of Year Review show Tom Vasel stated that IELLO has picked up Blue Cocker’s Medieval Academy for release in the U.S. Nothing official from IELLO has been released (at least nothing that I have found) so no further details on release date, price etc have been made available. If you want more details, I guess you’ll have to email Tom for the scoop. What I can say is that Medieval Academy has quickly become one of our go-to games when we’re in need of a casual filler that the whole family can enjoy. I was lucky enough to snag a copy from our friendly neighbors to the North (Canada, eh) and couldn’t be happier. Stay tuned for a review in the coming weeks (hopefully).