All Aboard the “Take My Money” Express! [choo-choo]

To mark the 10th anniversary of the most successful train franchise since Thomas the Tank Engine, Days of Wonder has announced the Ticket to Ride 10th Anniversary Edition!  This beautiful new edition brings a newly designed and illustrated oversized US map,  5 sets of sculpted plastic train miniatures and a huge hole in your wallet.  Hitting shelves across Europe in May 2014 and the rest of the world in June, the game will retail for $100/€80.

Cool Game or Not – Arcadia Quest 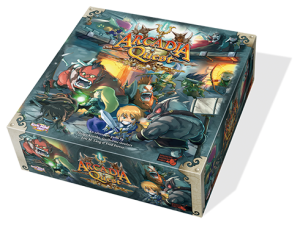 Sure to make eleventy billion dollars on Kickstarter and haunt your dreams and tabletops with even more miniature chibis comes Arcadia Quest, a new release from Cool Mini or Not.  This campaign-based game pits 2-4 players against game-controlled monsters and each other as leaders of a guild vying to complete a series of quests throughout the game’s numerous scenarios.  As with all Cool Mini or Not titles, I expect nothing but the highest quality miniatures and pray for a well written rulebook.  I will be keeping an eye on this one. 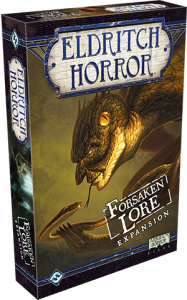 Fans of constantly pulling their hair out and yelling profanities at cardboard standies will be excited to know that Fantasy Flight Games has announced the first expansion to Eldritch Horror, Forsaken Lore.  This expansion will add over two hundred new cards to Eldritch Horror, including over one hundred new Encounter cards, twenty-four condition cards, and fourteen new mysteries. The only only thing forsaken for me is my ability to play anything in this mythos series outside of Elder Sign.  I’m personally still scarred from Arkham Horror but from what I’ve heard this game is strongly themed and slightly less irritating.  As a lover, not a fighter, I promise to give it a try though. 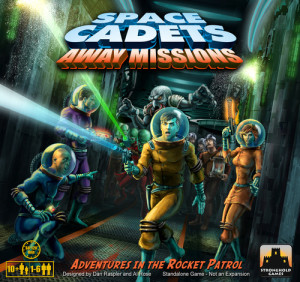 Exciting news for fans of the Space Cadets franchise!  Stronghold Games will be releasing their third installment in the franchise, Space Cadets: Away Missions (Adventures in the Rocket Patrol) or for those who don’t want to continually type that title, Space Cadets 3.  This title will be a cooperative game where 1-6 players take on the roles of adventurous space humans traversing the galaxy, stealing alien technology and kicking green extraterrestrial ass.  Space Cadets 3 will feature 15 scenarios in a campaign story for you and your friends to dominate (or be dominated like in Space Cadets 1).  Continuing in the Space Cadets tradition, this should provide another great outlet to maniacally yell at your friends because your ship is going in the wrong direction.

My one complaint about Space Cadets: Dice Duel has been how hard it is to get to the table with the optimum player count between 6-8 players. Well, Stronghold looks to address this with Space Cadets: Dice Duel – Die Fighter.  Awesome pun aside, this looks to be a great addition to the game for scalability and replayability in game groups of all sizes.   Fighters will be introduced as fast and maneuverable ships able to be flown by a single player and Experimental Equipment cards will upgrade capital ships (the original Space Cadets ship) with new abilities through a team drafting mechanism.This opens up the three new game modes for the Dice Duel universe:  Carrier Strike, Fight Assault and Fighter Duel.  Per the BoardGameGeek page,

In Carrier Strike, suitable for 6-10 players, each team gets one original ship (now called a Capital Ship) and one fighter. Fighter Assault has two fighters trying to take out a single heavily armed capital ship, and is designed for 4, 5, or 6 players. And Fighter Duel brings the Dice Duel experience to two players, as two fighters go head to head for a quick and intense battle.

Consider my interest piqued!  I will be issuing my duel challenges in due time.