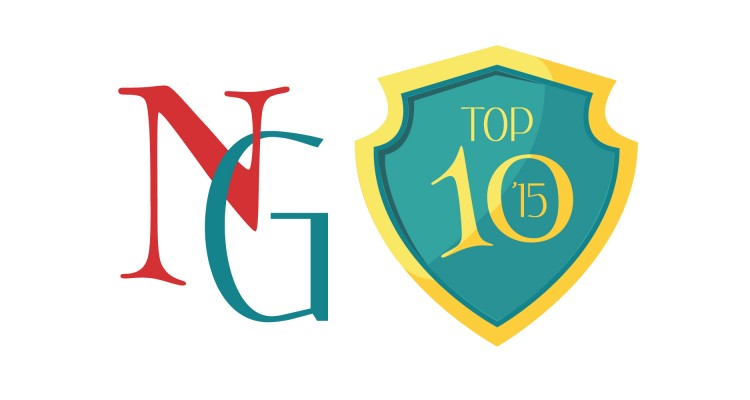 Now that 2015 has come and gone, we all decided to take a step back and fondly remember the new games that we played last year. Regardless of our varied gaming preferences, I think we’d all agree that, overall, it was another great year for the board game industry in general, and there are still a number of things to be excited about going forward! For innovation, we saw a number of successful consumable games take the market by storm, perhaps ushering in a new potential niche in the hobby; or maybe you were more intrigued by the games that required an app to lend a hand at the table? For those of us who cannot stand to rip up cards or listen to an app boss us around, there were also a number of excellent “traditional” games that continued to innovate and build upon years past.

This list awards our overall Top 10 Favorite Games of 2015. As I’m sure you are all intimately familiar, we were not able to play every title that was released last year, and therefore this list is presented through our lens of the hobby. Congratulations to all the designers and publishers that made 2015 such a great year to be a board gamer!

Alchemists, by designer Matúš Kotry, is a hefty 2-4 player deduction game that just oozes theme and cleverness. The game manages to seamlessly integrate a board game with an external app for an experience even your high school chemistry teacher would be impressed with. Through the use of a number of mechanics such as deduction, worker placement and bluffing, players will have to navigate the unforgiving world of science in order to solve this enjoyable alchemical puzzle. If you’re looking for a game to really burn that brain of yours, look no further than Alchemists!

Check out our Alechemists Review!

Check out our Baseball Highlights:2045 Review!

On the heels of his famed Splendor, designer Marc Andre’s latest game has undeservingly flown under the radar in our opinion. A very tactical, almost abstract game, Barony is built on a random hex map featuring five types of terrain on interlocking tiles. To gain the resources needed to raise your title and score points, you’ll be sending your knights out to develop the countryside and raid opposing villages to steal from the rich and give to yourself.  Mastery of the terrain and the specific movement rules is necessary to understand just how you should take action against your foes. With amazing wooden components and a simple set of rules, Barony is a game to check out if you haven’t already.

The Grizzled is a cooperative card game for two to five players from designers Fabien Riffaud and Juan Rodriguez, set against the backdrop of World War I. Unlike the grandiose facade of most conflict-driven games, The Grizzled merely utilizes a deck of beautifully illustrated cards and a few tokens. Victory does not involve eliminating your opponents or capturing a territory; instead, players must use astute teamwork in an attempt to overcome their own fears and preoccupations while enduring the trials of the Great War. The Grizzled is by far one of the best cooperative experiences I have had in the last few years.

Check out our The Grizzled Review!

Not to be confused with that game you used to play in your neighbor’s pool, this Marco Polo is a dice-based worker placement game from the guys who brought us T’zolkin: The Mayan Calendar. This title takes a number of standard euro-style mechanics and adds a few twists for a solid, engaging experience that feels both familiar and refreshing all at the same time. And, did I mention that you collect camel meeples?

As one of the more elegant filler-style games we played this year, Arboretum was sure to make our list. The beautiful arrays of trees are on full display as you and your opponents attempt to create the best arboretum in your tableau. While on the surface this title may appear relatively unassuming (I mean trees, really?), this small deck of cards packs a lot of tension into each and every decision you make. This big game in a little box gives Z-Man another winner in their card game series.

Using a clever combination of the beautiful world of Dixit with the classic mystery of Clue, Mysterium is sure to entertain. Asmodee’s new version of this Ukrainian hit has proven successful with a wide mix of groups who can appreciate the social aspect of helping one another figure out just what in the world the ghost player is trying to say!

Check out our Mysterium Review!

Pricing and distribution model aside, this game has given us some of our most memorable gaming moments of the year. The choose-your-own-adventure concept is nothing new in board games, but TIME Stories has created a narrative full of intrigue and puzzles to keep you on the edge of your seat for hours at a time. One of the biggest draws to the series for me (and no, it’s not the price point) is the fact that each scenario is designed and illustrated by new creatives. It has been interesting to see, even after the release of just two scenarios, how different designers and artists have come together to interpret and implement their visions within the TIME Stories framework. We can’t wait for the next few scenarios to release early this year so we can get another fix!

Im sure by now, all of you have heard of this little game called Pandemic Legacy which may or may not have taken the world by storm. We so desperately want to tell you how much fun and exciting this game is, with so many adventures and secrets behind all of those doors. Unfortunately, saying anything more would ruin the surprise! We can guarantee, though, that you will have an absolute blast playing this game and may also shed a tear or two after destroying components!

While many games fail to live up to the surrounding hype, the laughably plain and unassuming Codenames manages to exceed even the most hyperbolic praise. A simplistic design that makes you face-palm over not creating it first, Codenames is the new gold standard for party games both within and without the niche hobby market. Throw out Taboo, Cranium, Trivial Pursuit and anything else from the big box store. Spend $20 on this fantastic little game from CGE and go play it. Now!

Check out our Codenames Review!

Roll for the Galaxy (Review)

Bottom of the 9th

Disclosure: In order to compile this list, each member individually ranked their ten favorite games of the year. From these lists, the raw placements were then weighted based on the number of League members that included that game on their list, and that weighted value was averaged across the total number of League members who submitted lists. There you have it….math!