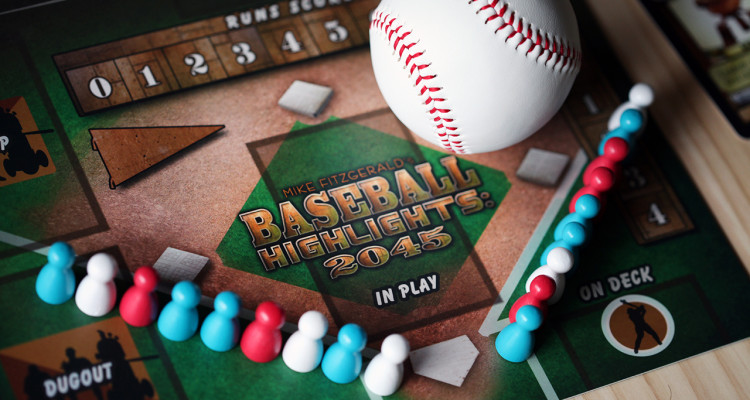 In the future, football’s ability to clone Ed Hoculi, make defense completely irrelevant and finally keep its players out of jail have it flourishing as America’s favorite sport. Baseball, on the edge of collapse, has decided to alter its uptight past time to inject new life into the game. And by inject, I don’t mean steroids – that’s so 2005. Games have been shortened to six innings; robotic players were added to promote offense; pitchers underwent bionic arm implants; and your run-of-the-mill humans, well they’ve become the fat kids in dodgeball – always picked last but still holding a place in our hearts. Did these changes work? Only time will tell…

A season of Baseball Highlights 2045 is played out over a series of mini-games that culminate in a best of seven World Series. These mini-games, like baseball, are won by scoring the most runs. To start each season, you and your friend will each grab one of the four 15-card base decks; either Los Angeles, New York, San Francisco or Boston. As a lifelong Baltimore Orioles fan, my choice is typically limited to Los Angeles or San Francisco – playing Boston or New York is for the devil! Your deck starts as an asymmetrical roster of Rookie and Veteran cards that will gradually be upgraded as you replace these average players with more talented prospects throughout the season. This is the future however, and baseball has changed. The game is now comprised of three “classes” of players:  the Naturals (humans) that excel in the field; the Cyborgs (technologically enhanced humans) that bring the heat on the mound; and the Robots (a series of Johnny 5’s relatives) that hit the cover off of the ball.

Unlike a real life baseball game, Baseball Highlights 2045 plays out in approximately three hours less time. Each mini-game is played using a hand of six cards—which represent the highlights of that particular game—with each player playing both offense and defense simultaneously. These cards may have immediate effects that provide an instant impact on the game or threatened hits that will resolve on your opponent’s turn, if not appropriately countered. At first, the resolution of these different card effects can be confusing and slightly unnatural, like using your non-dominant hand to throw a ball, but you will catch on and look less silly with practice. 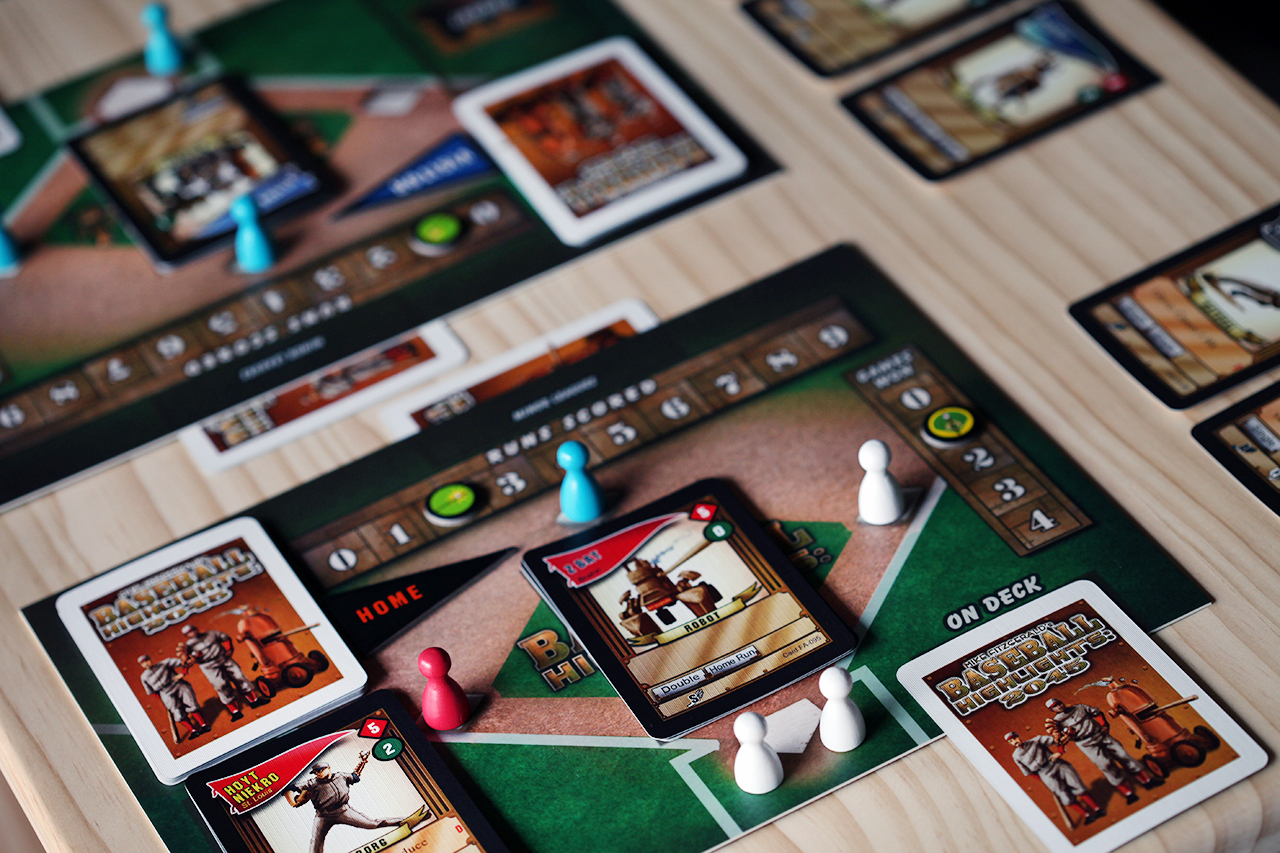 After a mini-game is played, you are given the chance to upgrade your deck with new and exciting players. Each player in your deck has a value associated with them; the total value of players played in the previous game provides the income necessary to purchase new players. Your deck will always remain at 15 cards, so after purchasing a new player you are required to send one of the players used in the last mini-game to the minors (removed from the game). Newly acquired players go to the top of your deck to be drawn into the next game. Careful construction of your deck to line up with your strategy, the current meta created by your opponent’s team and the buy row is critical to your success on the diamond.

The tactical card play is where the genius of Baseball Highlights 2045 lies. The back and forth tension brilliantly captures the spirit and momentum of a great baseball game. Within the simple mechanical structure of the game lies a number of tense decisions. With only a few cards in hand each mini-game, you are limited in what your team is capable of at any one point in time, and true to America’s pastime, precise timing, execution, and a little bit of luck will be needed for you to succeed. You could play this mini-game defensively, cancelling your opponents threatened hits and waiting for the opportune moment to sneak in a run or two; or perhaps your hand is built more towards an all-out offensive onslaught in which you hope to merely outscore your friend. If your strategy doesn’t play out, give your team a stereotypical press conference response about “living to see another day” and deal out some new cards. Unless, of course, you just blew game seven of the World Series; then you lose.

Worth the price of admission?

Admittedly, the baseball theme is not going to appeal to everyone. Sports games are typically niche and not worth owning from my personal experience, but Baseball Highlights 2045 bucks this trend. By distilling the action on the cards and eliminating a lot of the tedium of baseball, this game offers up an appealing experience to all gamers regardless of whether or not Bull Durham is one of your favorite movies of all time. That being said, even for a diehard baseball fan there are some strange elements within the theme of Baseball Highlights 2045 that you have to wrap your head around. For instance, how does a player step up to the plate, and in one at-bat, manage to hit a single and two home runs? Granted, we are using robots and cyborgs, but you may still balk at it. Just remember that the card play represents the highlights from the game and it’ll make more sense. If you look at the multiple threatened hits as what that player did throughout the whole game, it’s a little easier to understand. It’s like watching Sportscenter without having to wonder how Linda Cohen never ages! 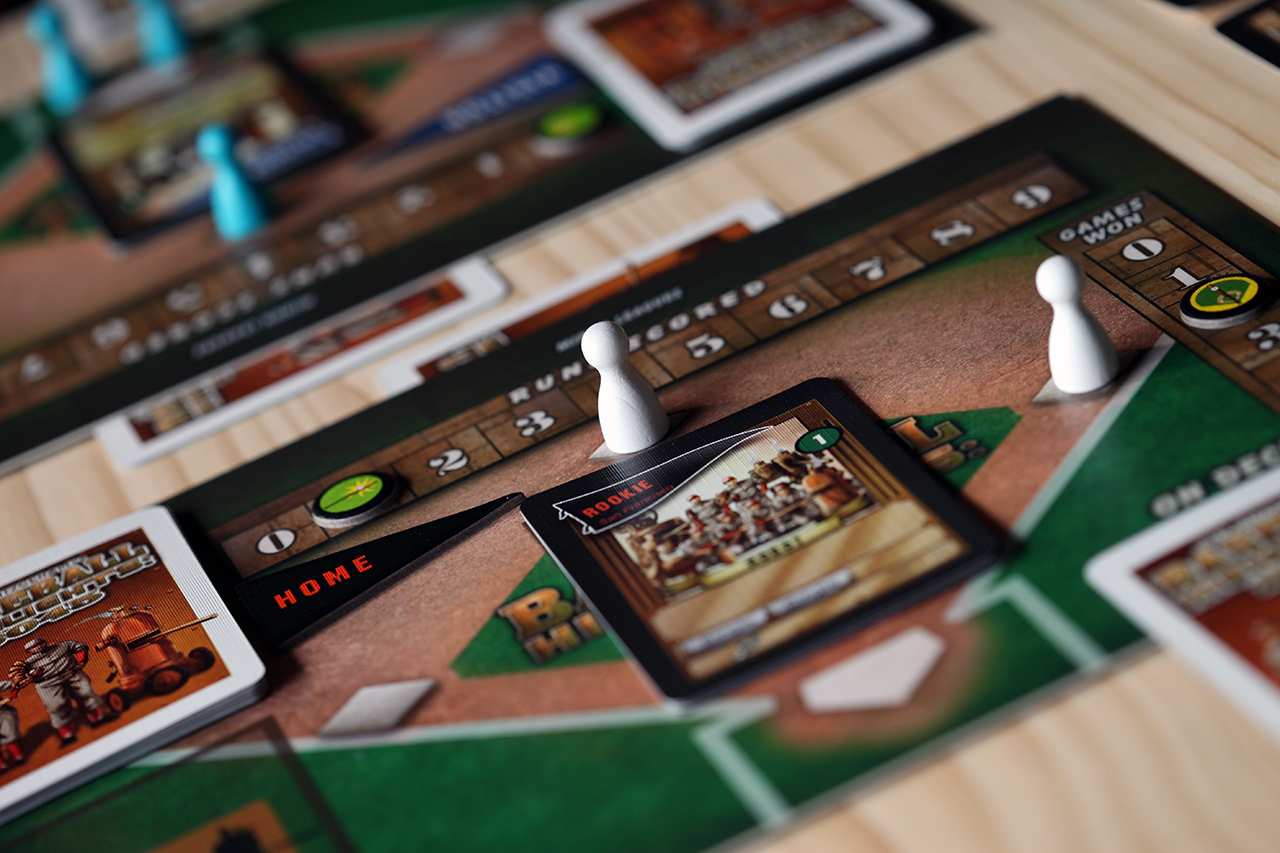 Baseball Highlights 2045 has taken hybrid deck-building and made it both tactical, fast paced and exciting by introducing a counter-play mechanic to the genre. There is no mindless dropping of your hand on the table and proceeding to count symbols. There is no playing on Twitter while your friends take their turns because you couldn’t care less about what they are doing. In this game, you have to pay attention and react to each and every card your opponent plays. Now, this is a deck of cards, so I would be remiss to say that you will always have an answer for what your friend is doing; luck of the draw is going to play its part but, like a broken bat single, you’re going to have to accept that it happens.

That aside, I am impressed by how tight and balanced this game feels. There is a huge variety of cards in this game, so much so that even after numerous plays I have yet to see them all. Each and every card appears to utilize a precise formula of immediate effects, threatened hits, speed and buying power coupled with the “rock-paper-scissors” element of the player classes. This has proven to provide tense, well balanced games each and every time. The enjoyment of the game is in creating your edge, which ultimately lies in building your deck to conform to your own strategy, as well as your read on the game/opponent to best determine how to counter or take the advantage in certain situations.

Baseball Highlights 2045 is a brilliantly designed package with its straightforward rule set, swift play time, and satisfying decisions. This game’s approach to deck-building is both refreshing and unique and I can only hope it spurs more creative thinking in the genre. Baseball Highlights 2045 truly showcases just why many consider Mike Fitzgerald to be the king of the card game. 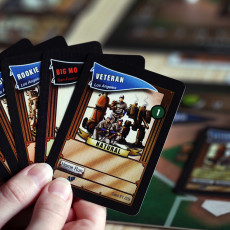 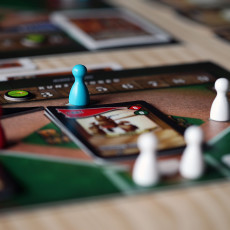 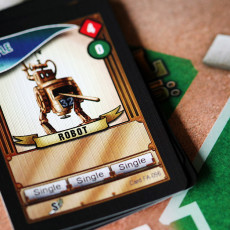 Let’s get my one minor critique out of the way: the large box and the 80% of it that is filled with air. I understand the argument that it provides space for expansions or more than one set of cards. I even accept that there are production and psychological consumer principles at play. But, I am saddened by how much space this little card game takes up on my shelf. The whole game (minus the boards which you could argue are over-sized as well) fits in a deck box. I want this game to be in my bag at all times, that’s how much I enjoy playing it. But what is essentially a two player card game for me is going to lose a place in my already tight bag to a game, and a box, more suitable.

Regardless of the space it takes on my shelf, it has a permanent spot reserved! Mike Fitzgerald has hit a homerun with Baseball Highlights 2045. Actually, in the context of this game, he has hit about four of them. I cannot say enough positive things about this game. Fans of the sport will surely be drawn to its thematic immersion but even those not as passionate about America’s pastime will find a fast paced, accessible, cat and mouse game with just the right amount of strategy and tactical decision making. Luck of the draw can surely interfere with even your most finely tuned deck but it also provides a number of  those magic moments of pure glee and/or utter heartbreak – the ones that will have you and your friends reminiscing long after the game is over. Nobody wants to get beat by a robot named Wiffle! But if you do, just remember there’s no crying in baseball.

Baseball Highlights 2045 is an outstanding game. Generally, I’m not a fan of deck-builders, but BH2045 has handled this aspect in such a way that it feels smoothly integrated into a condensed series of action-reaction matchups. Creating and efficiently managing your team is critical to your success. Whether you look to enhance your team with slugging machines (literally!) or golden gloves, the result is one that feels beautifully balanced. That said, as mentioned, luck is present and can lead to heartbreak in a tight contest. But, once you understand the flow of the game and get a better idea of your opponent’s roster, you’ll be able to make the appropriate adjustments in the draft for new players. All in all, my experiences have been exceedingly positive. Baseball Highlights 2045 is right in my wheelhouse and I can’t recommend this trip to the ballpark highly enough.