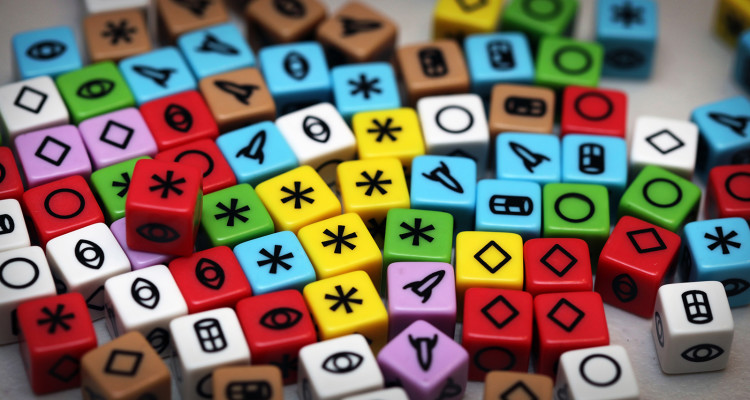 Roll for the Galaxy | Review

Many years from now, the Human species will be just another contender in the race for galactic control. As a leader in this interstellar community, it is up to you to choose a path that will lead your people to greatness. Will you crush others beneath your heel, or peacefully settle the worlds beyond? Perhaps you’ll buy your power by controlling the market for the various cuboid goods that have become all the rage in this future. No matter your choice, recognize that you are not alone. The race…er…roll…is on!

Roll for the Galaxy, from designers Wei-Hwa Huang and Thomas Lehmann, is the dice-based implementation of the popular card game Race for the Galaxy. Building from the core idea of developing, settling, and trading your way toward greatness, these designers have re-engineered the idea into a dice pool building cousin of its card-based counterpart. 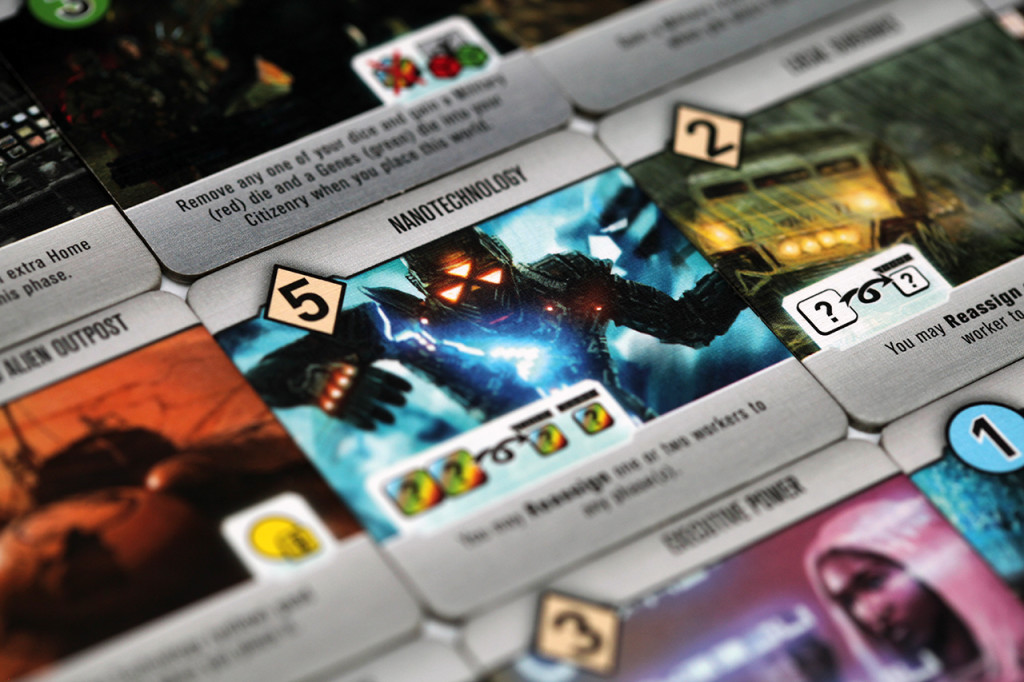 Roll for the Galaxy is an engine building game fueled (ha!) by a secret role/action selection mechanic. Each round, players will roll their available dice and allocate them to the five possible actions in the game: Explore, Develop, Settle, Produce, or Ship, according to their facing. The seven colors of dice each have a different distribution of results dedicated to these various actions. Red “Military” dice, for instance, have a higher proportion of Develop/Settle results and no Produce or Ship results in turn; whereas the blue “Novelty” dice are conversely dedicated to producing and shipping goods. Through the Explore, Develop and Settle actions, you will be able to construct a tableau of planet and technology tiles that will provide you with access to new dice and greater opportunities.

After sorting their dice by the actions rolled, each player will secretly select one of those five actions as their choice for this round. Only the dice allocated to actions chosen by at least one player will be used this round. As these are chosen secretly, the only action which you can guarantee to happen is the one you’ve chosen. It’s up to you to speculate and hope that your opponents choose some of the other actions to which you have dice allocated, or else they will simply be dead weight for this turn.

Any dice that are spent to develop or settle, shipped away for money or victory points, or produced into goods are returned to your “citizenry pool” – a state of limbo in which your spent dice will wait patiently to be re-bought and added back to your personal pool for the next round.

This cycle repeats until one player builds his/her 12th tile, or the preset pile of victory points has been exhausted. The player with the most points, determined from the sum of their victory point tokens and the value of the tiles in their tableau, is the victor! 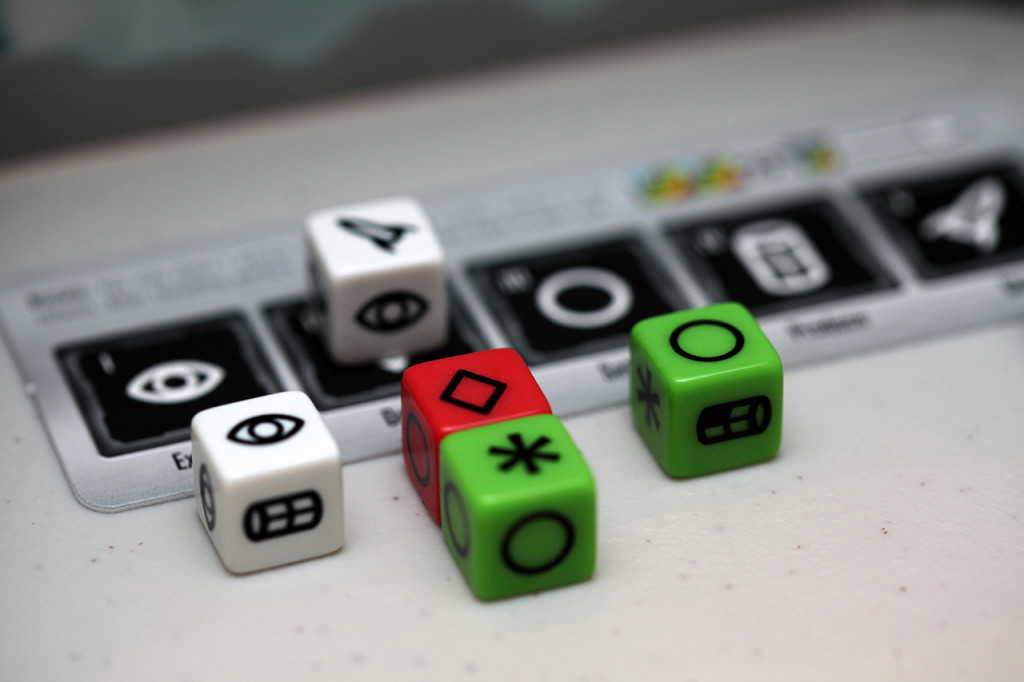 “Rocket Man, Burning Out His Fuel Up Here Alone”

Roll for the Galaxy is largely an exercise in efficiency, luck mitigation, and strategy execution. Despite this, oddly enough, it can also be played without concern for any of these factors; you just won’t play it very well. Roll gives off this strange vibe and takes players through a bit of a rollercoaster of experience as they tally up more plays. At first, the symbolism appears daunting and incoherent as it is largely borrowed from the source material, Race, and in itself does not do a great job of helping players to learn the game. Fortunately, all of the symbols in this version are also coupled with explanatory text. If you’re not sure what all of the space-age hieroglyphics mean, you can simply read the text on the tile. Given the amount of time that you will spend sorting through your own and other player’s tiles, this was the right move. Once you realize that the game itself isn’t overly complex – roll dice, allocate results, take the actions available, buy dice, repeat – you will cruise through the next couple of games with no problem.

Things might then take another turn though, as you start to realize some of the hidden depths in the game – how to manipulate exploring for new tiles; how to mitigate your dice rolls; and even how to form a smooth engine that provides you with the money, dice and points to win. By this point, you start to pick up on new and interesting ways to progress through the game beyond simply: “do I develop/settle or produce/ship?” The reassign power, for example, is a personal favorite to experiment with. Rather than explore for tiles that allow me to tailor my dice pool to my strategy, why not specialize in technology that allows me to put my dice wherever I want, no matter their facing? Or, on the other hand, maybe I’ll focus on building up tiles that offer me free actions altogether, without having to even worry about the dice as much. Through multiple plays, these different avenues begin to reveal themselves.

Now, it seems that hidden within this process is one of the potential flaws of the game. As voyages between the stars can be a lonely and solitary endeavor, so can all of this exploration be a largely individualized process, as there is little to no player interaction inherent to the game. Outside of which actions are chosen for the current round, my gameplay has zero direct impact on your gameplay. There is no scarcity of resources to compete for (minus the victory point chips, (kind of)), nor is there a system for attacking/defending, or even trading and negotiating between players. You’ll spend much of the game with your head buried behind your player screen, peeking up occasionally to track opponent’s tiles and points, only to return to your personal board to perfectly allocate your dice and execute your master plan. 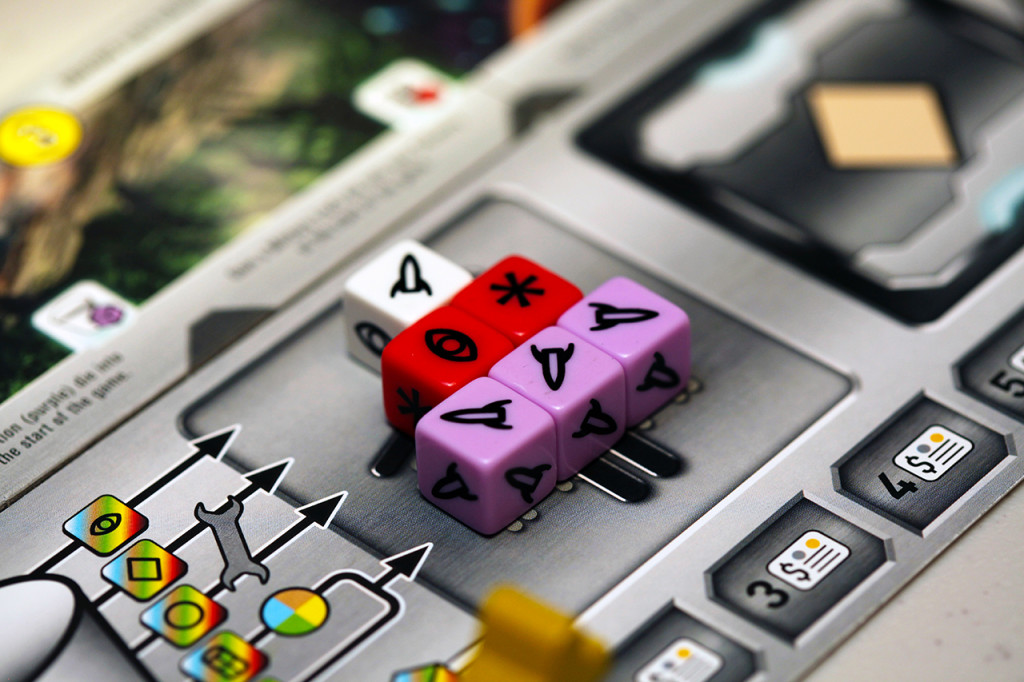 While this may sound unsatisfying to many, even the predominantly social gamer that I am was more than happy to engage with this game again and again. Sure, I’d try to chat others up a bit, asking what they’re building and trying to interject thematic explanations, but I accept that Roll doesn’t provide any of that for the player, nor does it want or claim to. It succeeds despite this solitaire experience because it is both quick to play and satisfying to puzzle through. With 90% of the game being simultaneous, scalability is a non-factor when it comes to time; games will take 30-45 minutes whether it’s you and one friend or your whole game group in on the action. At the end of it all, you’ll likely find that everyone at the table was able to build a unique engine that provided distinct strategic options for each person. You may even find, as we did, that most games end with several players very close in end score, which speaks to the balance of these varied play styles.

Overall, I find Roll for the Galaxy to be an extremely well-designed and enjoyable game to play. Rather than simply turn a popular card game into a dice-rolling gimmick, the team behind Roll has developed a unique entity that is all its own. The chinks in the armor, like the recycled art, screen-printed (rather than etched) dice, and the $60 price tag, will show more for some than others. I’ll let my fellow League members speak to those. I have found that these things are all overshadowed by the gameplay and how much this game offers to a player who wants to dig into it.

If you’ve made it this far in the review, you know my thoughts on Roll for the Galaxy. I considered purchasing this game a big risk—Race was an early sore spot in my gaming career and spending a hefty price on its spiritual successor was something I wasn’t wholly in support of, even as I turned over my cash to the game store. Fortunately, I truly cannot speak more highly of this game. It has proven, time and again, to be well worth its price tag. What a surprise this game is, being completely based around dice-rolling, yet providing such engaging strategic choices. If you enjoy games that emphasize building an efficient engine and seeing dice used in a unique way, look no further. I wholeheartedly recommend Roll for the Galaxy for anyone remotely interested in its gameplay, and even for those who may not be.

I was worried that this game would be too much like Race for the Galaxy and I wouldn’t like it, since I did not enjoy that game at all. Luckily, those worries were completely unfounded. Roll for the Galaxy is a great game and I love it every time it hits the table. While the rules initially seemed daunting and I just sat confused as Buns explained away, everything really does make sense halfway through the first play. After this initial learning curve, I was able to see that the mechanics are smooth and it plays quickly while having a lot of game to offer. It has a lot of depth with many available strategies based on the tiles you end up drawing, and the best part of this is that it avoids a lot of AP that can really ruin games for me. The simultaneous play also avoids a lot of downtime, which keeps you constantly engaged in the game. Some may not like the lack of player interaction, but I have fun with the challenge of a game that lets me try to play the best I can, completely uninterrupted, and then compare that to everyone else to see who fared best. Roll for the Galaxy makes my list of games that I will always be willing to play.

The first time Buns explained this game to me, I thought he had lost his mind; Roll for the Galaxy sounds way more complicated than it actually is. The rules explanation sounded so crazy because the game is so fluid: you have many choices for actions and options that change from turn-to-turn based on the dice you roll and the strategies that your tiles present. Further, the reassign ability allows you to take actions that your dice don’t outright give you, so you’re never trapped when you need to get something done.

The player aid, which doubles as a player screen so your opponents don’t know what you’re doing until you’re actually doing it, is also super helpful. I’ve never played Race for the Galaxy, but from what I understand, the symbols and the vocabulary that it uses are part of why it is such a difficult game. The player aid presents an explanation for each of those symbols and the actions that they represent. So, while you are trying to kick everyone’s butt and develop and settle all of your tiles, you have something to look back at to make sure you know what you’re doing. This has been extremely helpful to me in trying to remember the wording that is used, particularly in the shipping options ,and the way that actions are phrased on the settlement and development tiles.

I’ve really enjoyed this game and am always happy to throw it into play on game night. It plays quickly and keeps you engaged with its simultaneous play mechanic: there’s no waiting around for your opponents if they’ve chosen an action that you don’t want to take. Plus, the components are also quite nice and shaking around your cup full of brightly-colored dice is pretty satisfying.