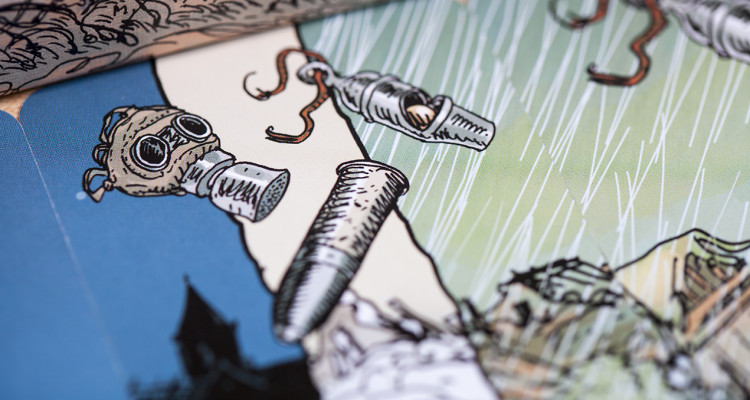 I n the village square, the group of inseparable friends contemplate, stunned, the General Mobilization order plastered to the town hall. For many weeks now, the papers had become worrisome, but the brutality of the announcement surprises everyone. Without having any idea of the hell in which they’ll be plunged, they promise each other that they’ll survive to come back all together, no matter what happens. Unfortunately, the reality they’ll have to face will be much worse than their deepest fears.

The Grizzled is a cooperative card game for two to five players from designers Fabien Riffaud and Juan Rodriguez set against the backdrop of World War I. Unlike the grandiose facade of most conflict-driven games, The Grizzled merely utilizes a deck of beautifully illustrated cards and a few tokens. Victory does not involve eliminating your opponents or capturing a territory; instead, players must use astute teamwork in an attempt to overcome their own fears and preoccupations while enduring the trials of the Great War. The Grizzled is by far one of the best cooperative experiences I have had in the last few years. 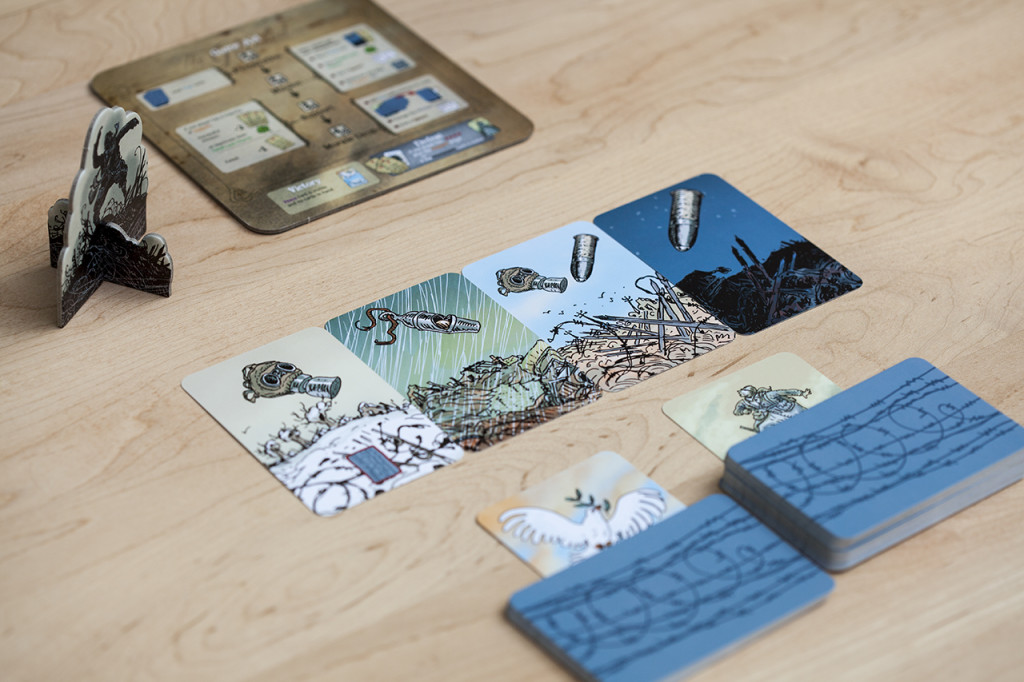 For the most part, the game is mechanically straightforward. Through a series of successive missions you will be quietly (no discussion of what you have is allowed) playing cards to the table in an attempt to empty both your hand and the Trials pile. The deck of cards is comprised of Threats and Hard Knocks. Threat cards constitute one or more of the various threats you will encounter on your missions—from environment-related hardships, like rain or snow, to more militarily-focused threats, like gas or mortar fire. Mission success is determined by how well you and your friends are able to withstand the unspeakable, as escaping the round without acquiring three of one type of threat means you live to see another day.

Along with the extraneous elements of war, you must also deal with the internal struggles that torment even the bravest of soldiers. Hard Knock cards are representative of the psychological effects you must cope with as the war progresses. These have a lasting consequence in the form of a trauma, phobia or trait which will negatively alter the current game state. For instance, you may acquire a night trauma, permanently adding a threat to the game board, or perhaps you become frenzied, wounded, panicked or fragile. As a team, you will need to support each other through an encouraging word or even something as simple as a hot cup of coffee. Learning to carry on with these hardships is the only way you will survive. In game, these acts of passion constitute playing speech tokens or secretly pointing one of your support tokens towards a friend which may help alleviate one or two of their woes at the end of a mission. Should one of you inherit four or more hard knocks, or morale drop to an insurmountable level, the grim reality sets in that all is lost—including the game. 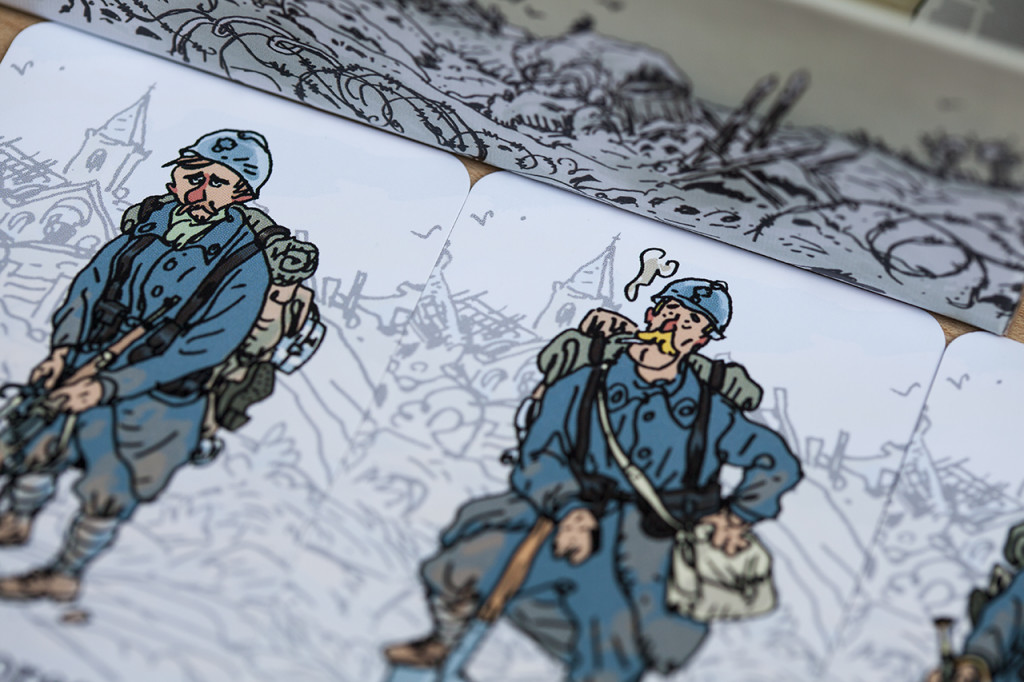 There is something to be said about a game that can transcend its mechanics and really settle you into the world being portrayed on the table. While the game can be played as a simple abstracted co-op filler, you would be doing yourself a disservice if you did not pause to explore the story presented in this fascinating design.

Through the restrictive silence, The Grizzled does a superb job creating an eloquent narrative which truly evokes the melancholy experienced by the brave soldiers in the trenches. The tension grows as the threats become more numerous and a true sense of teamwork is felt as you strain to navigate the mission in the hope of correctly anticipating the actions of your friends. Your ability to interpret when to press on versus when it’s in the best interest of everyone that you withdrawal and offer support will prove crucial to the mission’s success.

It would be imprudent of me not to mention the illustrations and how they truly elicit the perspective that I assume the designer’s were trying to convey. Using a stylized political cartoon approach, the artist, the late Bernard Verlhac (better known by his pseudonym, Tignous), truly captures the poignant atmosphere of the Great War which is so often overlooked in favor of the more “glamorous” storyline of the second world war.

The Grizzled is more than a game—it’s a piece of art. From it’s impressive minimalistic design to the excellent illustrations, this game has continued to impress me with each play and is deserving of a place on your shelf. 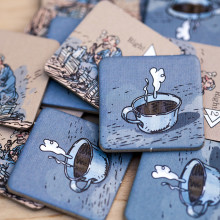 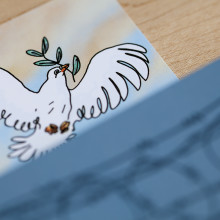 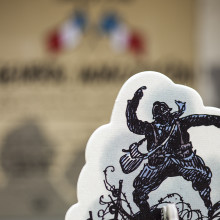 Having just experienced the astounding Valiant Hearts, a video game also about the bleak conditions of World War I, The Grizzled comes at a time where my interest in this history is peaking. I was initially drawn in by the remarkable art and the cooperative experience only to become engulfed by the oft times punishing ‘when it rains, it pours’ style gameplay. The ebb and flow of your squad’s health and condition as threats stack up creates a discernible tension, putting you in a position where you’re never quite comfortable (this is war after all). But that is where camaraderie becomes an integral part in your survival. Limited in your speech with fellow soldiers in the flooded trenches, you must independently make decisions in support of the team in order to overcome the barrage of threats. While it’s difficult to manufacture words to describe my enjoyment of the game, the experience is satisfyingly challenging and defeat only encourages another attempt to overcome the dismal circumstances.

Rarely does a cooperative game manage to inject the raw feelings of hope and despair that it reaches for; however, The Grizzled, with its minimalist design and heavy theme, creates a tension that looms over the table and forces players to feel the struggle being portrayed.

You are not heroes in this game. You won’t storm No Man’s Land valiantly or stand proud beneath the flag of your nation. In The Grizzled, you are just men and women trying to survive the brutality of early 20th century warfare – together. Your most memorable deeds will be the times you comforted wounded friends and made the tough choice to abandon the front line, withdrawing to safety for the sake of your company.

At the end of the struggle, should you even make it there, you will not necessarily feel proud of your accomplishments, but you will most definitely look around the table at your team and feel relieved that you all made it out alive.

It’s this powerful portrayal of The Great War and the fact that it’s accomplished by a small-box card game that makes The Grizzled an amazing experience. It’s proof that more is not always better, and this game should be lauded as one of the best cooperative experiences currently available.