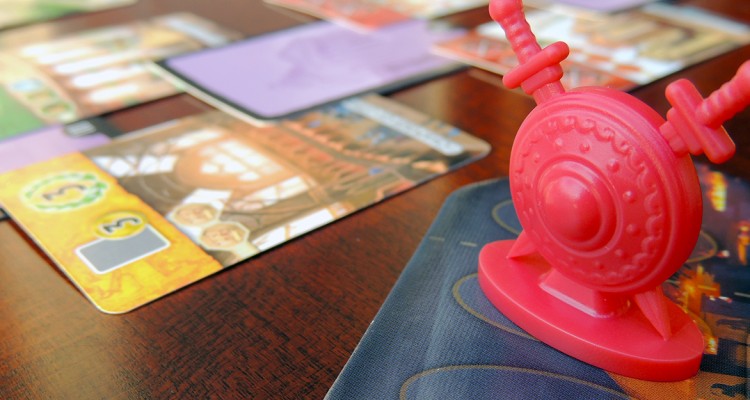 In 2010, Antoine Bauza released 7 Wonders, a little drafting game that you may have heard of. Almost six years later, it now boasts several accolades, including a coveted Kennerspiel des Jahres award, and is generally considered one of the best introductory hobby games around, particularly within the genre of card-drafting games. It also carries three full-sized expansions and a wealth of extra bonus content, with each addition extending the mix with new ideas and mechanics. The latest entry, 7 Wonders: Duel, takes the highly regarded series back to its roots and re-implements the basic experience for strictly two players, a player count that was only weakly supported by the original title.

In many ways, 7 Wonders: Duel feels identical to its predecessor. You and your opponent draft cards representing the different elements of your civilization – materials, culture, military power, etc. – and use those cards in one of three ways: to improve your civilization, to gain money, or to build a Wonder. This occurs across three ages (rounds), at the end of which the player with the highest total score wins. Where this title sets itself apart from the original is with the optimizations made for the two-player format. 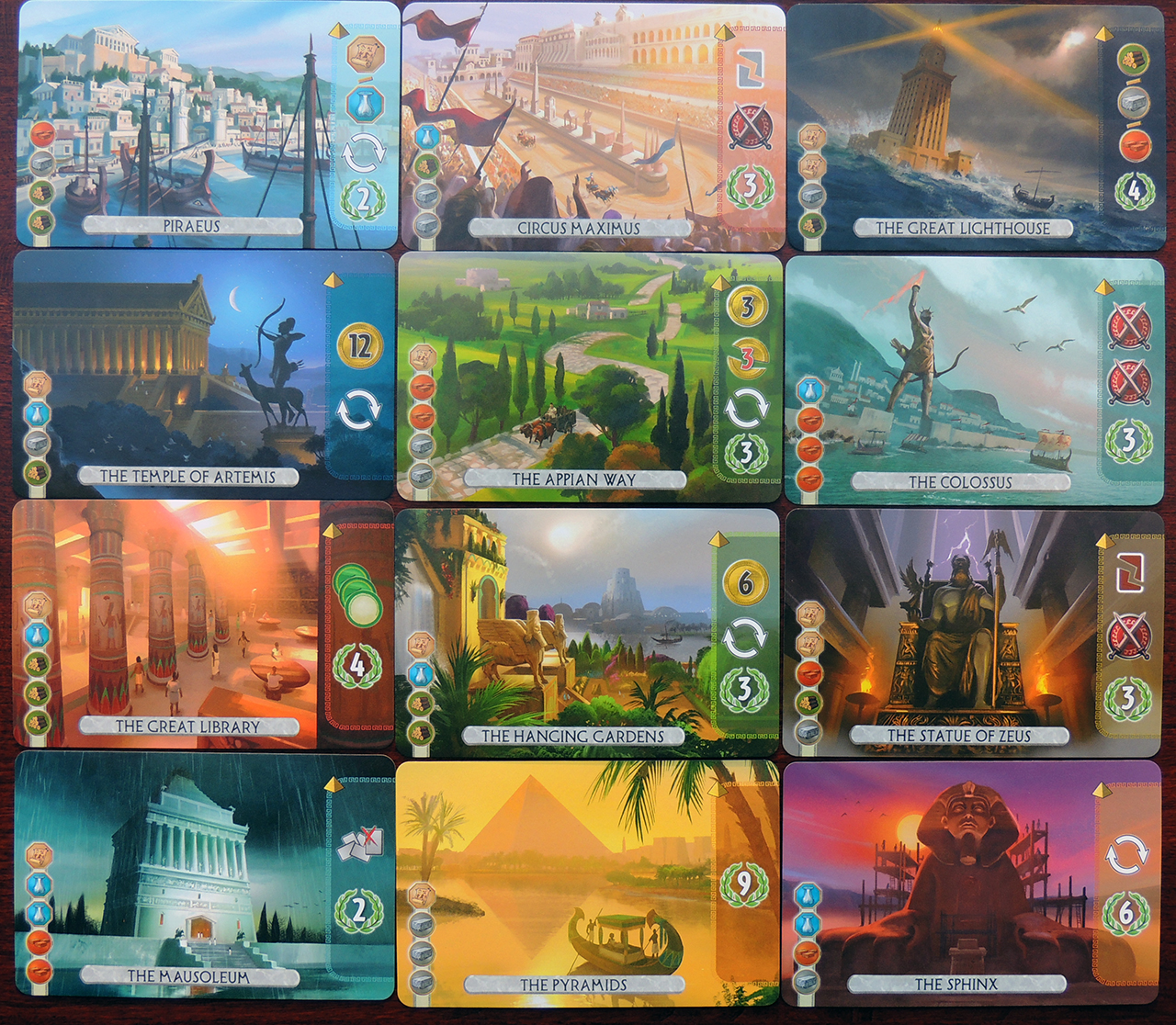 Rather than simultaneously drafting from rotating hands of cards, Bauza and Cathala have created three unique card scaffolds, one for each age, from which you and your opponent will alternate drafting. Each tiered system includes face-up and face-down cards which overlap; allowing you to only draft cards which are completely uncovered. The hidden cards will only flip face-up once all cards covering them have been chosen. This creates a healthy tension, as you and your opponent both watch the board unfold with each turn. Additionally, it features an element of timing that is distinct from the original 7 Wonders, as you must constantly anticipate your opponent’s next move and its direct impact on the cards that will be available to you. This style of drafting also injects an extra dose of “take-that” or “hate drafting” to the game. Being able to always discard a card for money allows you to directly counter your opponent’s potential moves and a skilled player can use this to target a valuable resource or point scoring card at just the right moment.

With the mention of point scoring, Duel also sets itself apart by having two variable end-game conditions that are completely separate from your total score. These two conditions also serve to radically change the value and purpose of two card types – military and science. Gone is the standard end-of-age military scoring and in its place is a tug-of-war style military track. Each drafted military card will advance the military power token toward your opponent, and should that token reach the end of your opponent’s track, you win outright. Game over! Similarly, there are seven distinct science icons in the game and collecting six of the seven will result in an outright scientific victory. Outside of these winning conditions, both cards still find value by providing points and potential benefits depending on where you end the game on the military track and which science symbols you collect. Having those extra winning conditions, and having them possibly occur at any point during the game, draws your focus to each and every card on the board. While you may be working diligently toward a peaceful, cultured society, the constant threat of the military and science forces you to take notice and occasionally spend your turn slowing your opponents, rather than moving yourself forward. 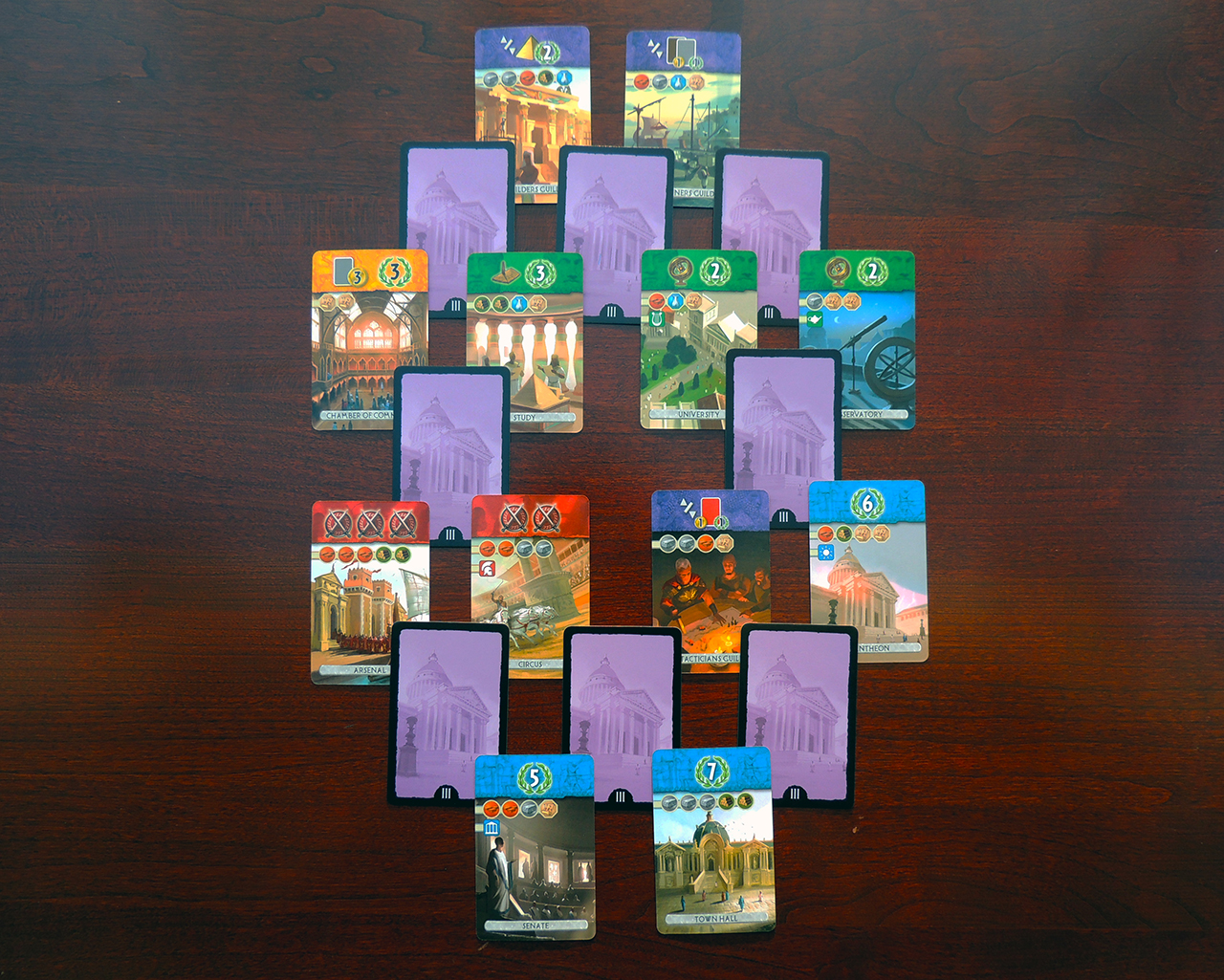 One of the best ways to utilize those cards drafted to spite your opponent is to apply them to one of your Wonders. Rather than building a single Wonder in successive stages throughout the game, 7 Wonders: Duel references its namesake by providing you and your opponent with four Wonders each. These Wonders are identical to those found in the original title, but the way they function is slightly different here. For a cost in resources, a drafted card can be used to build one of your Wonders and you gain an immediate benefit. Depending on the structure, this could be points, military advancement, a free building, or even another turn. The latter is of note in this game because back-to-back turns can provide a valuable edge over your opponent. The other piece of note is that, of the eight Wonders available between the two of you, only seven may be built during the game. This adds another element to consider; should your opponent build his or her fourth Wonder, you are at a permanent disadvantage for that point scoring category and one of your Wonders will go to waste. It is surely surmountable, but not something you want to hand your opponent easily.

7 Wonders: Duel succeeds in doing what many titles, including its point of origin, 7 Wonders, have not – providing a functional and engaging two-player drafting experience. This design includes all of the enjoyable elements of a drafting game – cost/benefit card analysis, variable draw, opponent choice speculation, card combos – without the bland play of passing two hands of cards back and forth or forcing you to manage a dummy/NPC player.

Along with a two-player drafting game, Bauza and Cathala should be commended for creating an experience that feels wholly akin to the original. Every element is here, just tweaked and optimized for the player count. You’ll feel right at home sitting down with Duel and teaching it to a friend. You’ll probably find yourself beginning with “Okay, this is just like 7 Wonders, but this is how ‘X’ works in this one….”

Where Duel falls short is in unique replayability, in the sense that only three cards are removed from each age during a game. This means that almost every game of 7 Wonders Duel will have you navigating a very familiar set of cards age-to-age. This is a definite negative for players who enjoy seeing new combos and unfamiliar options. For others, this is an opportunity to train in efficiency across multiple games.

For its first few plays, at least, Duel also proves to be a game with dead ends. With experience, you’ll be able to quickly read the Age I board and, with relative accuracy, gauge whether a military or scientific victory is possible. It takes concerted effort to reach those goals and going down that path only to fall short by a few spaces or one symbol means that a lot of time was spent on an avenue without a noticeable benefit on the final score card. Trying to hop to a different track mid game is difficult and apt opponents can set you back just enough with a few savvy plays. The game rewards a player’s ability to weigh not only the monetary or point value of a decision, but also the swing that it may set in motion as the drafting tower unravels.

It is difficult to say where these potential pitfalls leave 7 Wonders: Duel. At its heart, Duel is a filler game, played in 30-minutes, that can begin to feel familiar after several plays. For some, that’s cause to leave it on the store shelf. For others, it is an opportunity to optimize a recognizable system within the rotating puzzle of randomized drafting layouts and clever opponents. No matter what your final take, the suggestion that Duel is an excellently designed two-player drafting experience that fits squarely in the line of previous titles is wholly true. 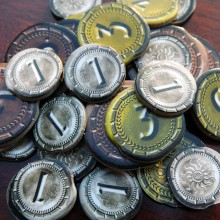 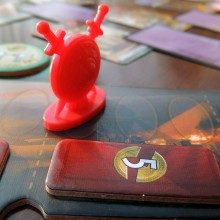 I must say that 7 Wonders is not really my favorite game to play, between all of the passing cards along between multiple people and the potential bad luck of being seated next to someone who will thoroughly kick your butt, even if you’ve only played once or twice before. I have found Duel, on the other hand, to be thoroughly enjoyable! As Matt said, the foundations of the game are the same, but in my opinion the structure has been simplified, making it both easier and more strategic. You still have to pay attention to what cards you’re making available to your opponent, but the impending card options are more transparent. You also still need to balance collecting a variety of resources with meeting your goals for specific card types. Play feels faster too, which could be attributed to there only being two players. I definitely recommend 7 Wonders Duel, whether or not you’re a fan of the original!

7 Wonders is a game that I’m quite a fan of, so I was very interested in seeing just what these two designers could pull off with their two-player version of the title. In general, I’m satisfied, and perhaps even impressed with what they’ve managed to come up with. While I find the differing patterns of cards throughout the three ages to be a tad odd, I do enjoy the mix of hidden and open information, letting you plan ahead to some extent but leaving just enough wiggle room to take certain gambles. With this, given that deciding just when to take certain cards and allow access to the face-down ones underneath is an important tactical choice, Wonders that grant additional turns may seem quite powerful, as they ruin your carefully mathed-out scenario. As mentioned above, though, the sameness of the available card pool may eventually begin to wear after multiple plays. Whereas in the original, the luck of the draw and the machinations of your opponents may get you a completely different selection from game to game, here you have two players fighting over a nearly static set of resources. Still, all in all, I will say that this is an excellent adaptation of a game meant for a larger group of players, and while I don’t tend to find myself in two-player matches often, I’ll give this one a thumb and a half.