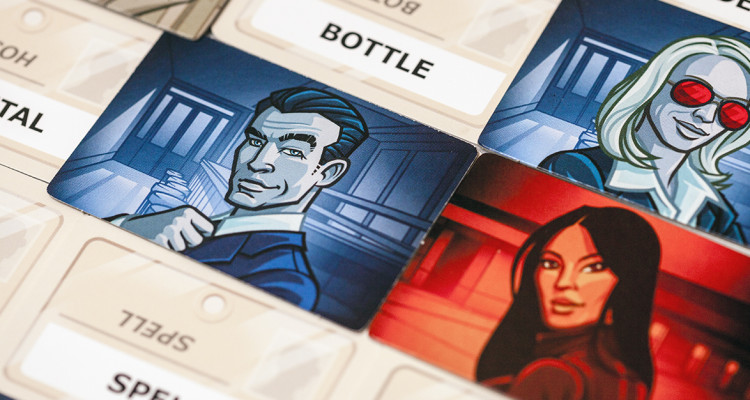 Your mission is simple: find the other agents on your team. Watch out for civilians – you don’t want to spook them – and keep clear of enemy territory. Avoid the assassin at all costs – you’ve worked too hard on this project to be taken out now. Your team needs you.

Codenames is a word-based deduction game that can find a niche with almost any group of people, from you and your best secret agent friend to a group of eight Austin Powers wannabes. Designed by Vlaada Chvátil (Tash-Kalar: Arena of Legends, Pictomania, Galaxy Trucker), with sleek art from Tomáš Kučerovský (Galaxy Trucker), Codenames immerses you in a fact-finding mission that leaves all that serious spy-business behind in favor of a little light speculation.

Your Mission, Should You Choose to Accept It

Two spymasters compete head-to-head, doing their best through cryptic clues and veiled references to lead their spies to find their teammates, without leading them to the opposition or even worse, the assassin. With secrecy a top priority, they’ll want to avoid entangling innocent bystanders, leaving them completely oblivious to the world of espionage through they wander.

Among a field of 25 figures, known only by their codenames, stand your fellow agents, your adversaries, a couple of random folk who will probably just get in your way, and the deadly assassin. As spymaster, you know all of the hidden identities, as designated by the key card that is visible only to you and your opposing number. It’s your job to give enough information to your field operatives that they can identify those with whom they are allied. To do this, you will provide a one word clue and a number. This word must correlate in some way to cards on the table that represent your agents; the number is representative of how many cards potentially correspond to that clue. If there are cards on the table that read CARROT and BROCCOLI, your clue could be “vegetable: 2”. Be careful, though, because if the opposing spymaster has an agent with the codename POTATO, your field operatives could end up identifying someone on the other team. Let’s not even consider the case in which your clue leads your team to identify the assassin, because you may as well then hang up your hat; you’ve lost the game, and your operatives.

For those on the other side of the table, as a field operative, it’s your job to take the vague and weird clues given to you by the spymaster and somehow follow his or her thinking to identify your associates. That’s not to say that all of the clues will be elusive: it’s just that the more agents your spymaster is trying to get you to guess on a single turn, the broader their connections will need to be, and the crazier the clues might get. Field operatives may confer with one another about the clues they receive prior to guessing which agent cards their spymaster is trying to identify. To guess an agent, you must actually touch the card and you must always guess at least one card. If you’ve guessed correctly, the card is covered up with your team’s color and you can continue guessing. If you’ve guessed incorrectly, you’ve found either an opposing agent or an innocent bystander… unless you uncovered the assassin, which means the game is over and you’ve been killed and you lose. Good day, sir.

Field operatives can earn extra attempts by correctly guessing the full number of cards specified by their clue: If your hint was “vegetable: 2,” and both agents are correctly identified, the operatives may then attempt to guess one additional agent, perhaps one they missed from an earlier round. Spymasters can also allow for unlimited guesses by using a clue with the number zero (i.e. “predator: 0”), which means that none of your words relate to the clue word given, but field operatives can guess any number of words that they’d like until they get one wrong. Similarly, the spymaster can give a clue with the number “unlimited,” (i.e. “space: unlimited”). This can give your field operatives the chance to guess cards that they missed on previous turns because of wrong answers, as well as those related to the new clue word. The trick with this tactic is that your operatives won’t know how many cards relate to which clues.

When all of your team’s agents have been identified, you win! If the other team identifies all of their agents first, you lose! If you identify the assassin instead of any of your allies, well, you really lose! 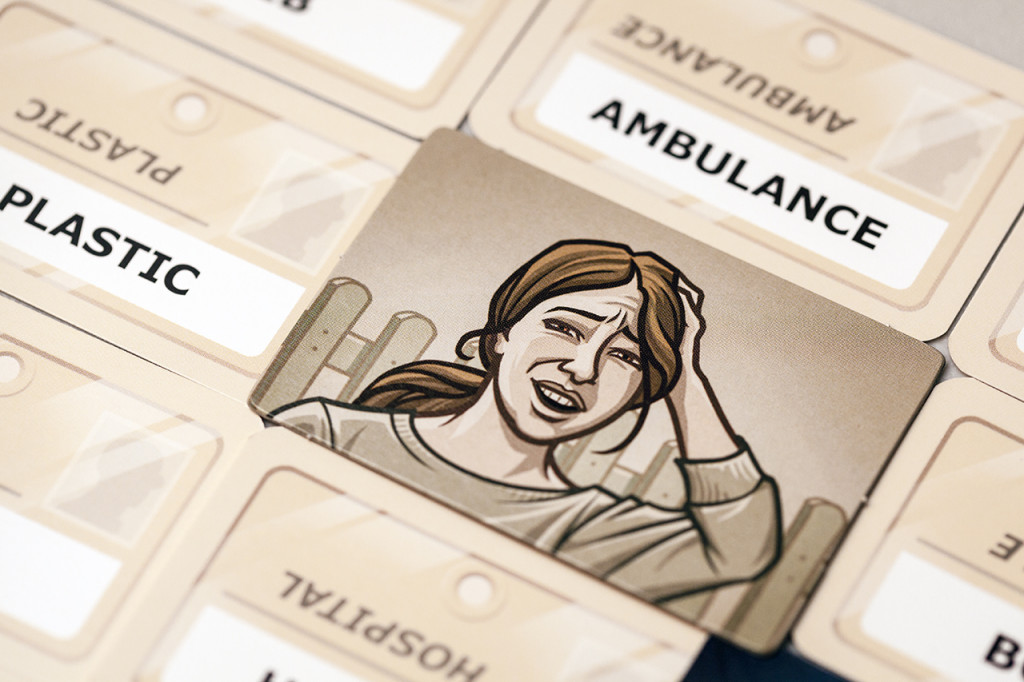 In the vein of Catchphrase and Taboo, Codenames invites you to try your hand at making your teammates guess random words based on limited information. Unlike those titles, Codenames provides a tangible and visual field of your possible answers. The game itself is easy to teach to anyone, making it perfect for those who aren’t deep into the board gaming world, and it’s got such light, fun gameplay that it can easily be thrown into your regular game group as a filler in between those long and heavy euros.

Provided in the rulebook are variants with which you can play with only two or three players, counts at which you can’t normally form into two teams. Happily, these seem to work well, and the spirit of the game is not lost in these situations! We’ve played Codenames as a one-off filler and we’ve played it multiple times in a row, the only trouble we’ve had is when someone thinks they’ve got the greatest clue ever and then no one has the slightest idea what they’re talking about.

Codenames has excellent longevity, with a large selection of cards that can be dealt in almost endless combinations. Along with such simple gameplay and the basic premise of guessing and tying together words with simple clues, it really is quite timeless.

Following its introduction at Gen Con this year, Codenames has been one of, if not the most talked about games in the hobby. The shear elegance of the design makes you wonder just how this had not been done before – it’s ingenious. While on the surface the game is very simple, the pressure on you as the clue giver can be enormous if you’re not in sync with your team. There are games where every word on the board aligns in such a way that your job is practically automatic. And then there are games where you’re dealt a complete dud and must rack your brain to navigate the team. In both instances, a connection with your team is still met with the utmost gratification. Easily my most played game in 2015, Codenames will top many people’s lists for game of the year. It’s absolutely brilliant!

Codenames is a show stopper when it comes to party games. The design is simple and the rules are easy to teach. The complexity eventually begins to slowly unravel as you work your way through a couple of rounds. The mechanics offer a true randomized experience each game and you will find yourself playing multiple times without things getting stale. There are 2 and 3 player variants for the game that work really well and are kinda fun to play, but the best experience is with at least 4 players. There is a great balance of fun as well for the clue giver and the guesser. I highly recommend this for any gaming group.

If I say to you, “Stripes: 3”, what’s the proper response? If you picked out ‘Tiger’, ‘Corporal’, and ‘Crosswalk’, then I want you on my team! Codenames rewards lateral thinking on the part of both the spymaster and the operatives, forcing you to consider the rest of your team and mesh gears with them. The game has an utterly simple design, but really, it has everything you need with nothing to spare. A hefty stack of code-word cards ensure that the game remains different from round to round, and there are enough keys included that you should never be able to guess just from the agents you’ve already revealed. An excellent party game, and I’m usually the one against the very idea of them. Two thumbs!

Codenames is such a simple game, but so much fun as well. I’ve really enjoyed it at the 4 player count. Even adding one person per team still lets it be fun, since now you’re both interpreting clues differently. The tension that comes with talking out loud about the clues given, watching the other person try not to cringe as you completely misinterpret a clue, and then making that choice to go for it and touch one of the cards is excellent. Just don’t yell “ohhh bonus guess” and point to a random card on the board. It will be the assassin, and you will be hated. Overall, this is a really great game that I won’t turn down to play and will probably add to my own collection even though the group has some copies.

While many games fail to live up to the surrounding hype, the laughably plain and unassuming Codenames manages to exceed even the most hyperbolic praise. A simplistic design that makes you face-palm over not creating it first, Codenames is the new gold standard for party games both within and outside of the niche hobby market. Throw out Taboo, Cranium, Trivial Pursuit and anything else from the big box store. Spend $20 on this fantastic little game from CGE and go play it. Now.