Grab your Clif bars and your Camelbak because it’s time for some hiking! Today, we traverse the treacherous Bear Valley, populated by the most vicious of bears and the darkest of caves, a path sliced across by an unpredictable river! Don’t forget your supplies and you’d better keep an eye out for magic mushrooms and fairies.

Bear Valley, a card game from Carl Chudyk, is one of the newest releases from Stronghold Games. The game involves card-placement to create a table-sized (we’re not kidding) map on which players traverse their meeples in a race to the finish line.

This is In Tents

The objective of Bear Valley is simple: get your guy to the camp at the other end of the valley before your campmates—apparently you don’t like them anyway. Each game starts with a river map based on how many players are participating, and whether you’d like to play a short or long game. From that initial river, you’ll expand the map on each turn by placing cards from the wilderness deck in alignment with the paths that are laid out on the current survey. After you’ve completed your card placement, if the movement rules allow, you’ll move onto the last card you placed and be ready for your next turn. 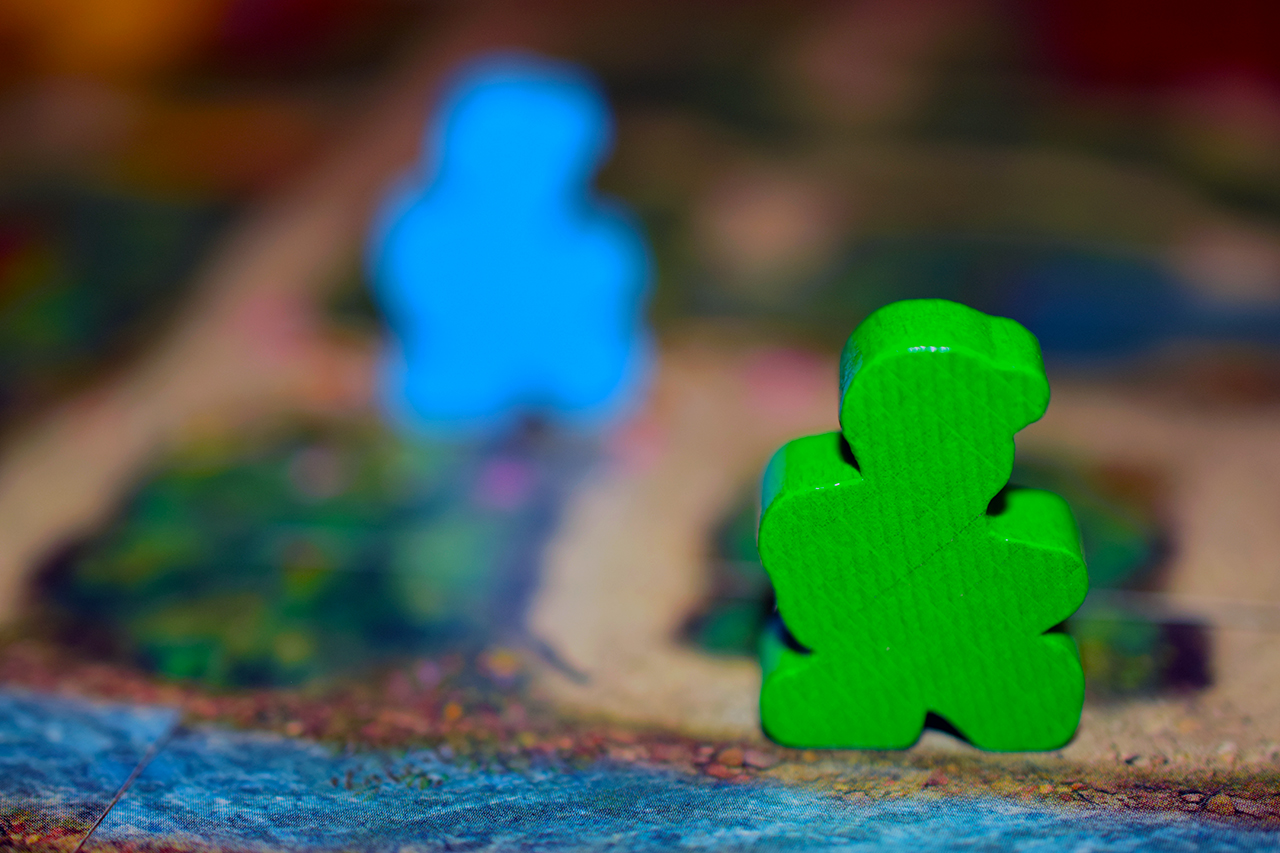 On your turn, card placement occurs in actions: each action you take is an “hour.” Your turn begins at one o’clock, generally with exploring, in which you choose a path exit on your current location and then draw a new wilderness card. The new card can be placed at whichever orientation you choose, but must be placed adjacent to your current card in a brick-laying fashion, such that each card ultimately can touch six other cards. To continue exploring, you then choose a path on that card and draw another card to place (now it’s two o’clock) and so on and so forth until you hit a roadblock of some sort or you decide that you’ve placed a path card on which you’d like to end your turn.

Alternatively to exploring, there is traversing. When traversing, you move your token to adjacent cards along connecting paths. You may traverse before and after your explore but you can’t traverse the same card twice in one turn. Each movement outside of exploring also counts as an hour in terms of your action count. When traversing, you can’t cross a card on which another player’s token is. Only when you have declared your movement finished can you move your player token.

There are several things that stop your movement in Bear Valley, though.

Alternatively, there are a lot of options to prolong your exploration and movement. There are item cards that give you item tokens with special skills, like a picnic basket token that you can drop on a bear card to keep moving through it. There are money cards, which allow you to collect gold coins that can be used for trading or to pass your opponents in the wilderness. There are enchantment cards that let you ignore specific barriers to movement, such as the mushrooms, which allow a player to hallucinate and discard their first explored card if they don’t like it. You can also beef up the game with character cards. Each has special abilities and deficits that interact with aforementioned extras and allow for more variation in game play.

It is of particular importance to note that the equipment, gold, trading post, cave and enchantment cards are only used for their paths in the basic game.

Grin and Bear It

The push-your-luck nature of exploring in Bear Valley creates a constant challenge
Upon playing the basic game of Bear Valley, it was readily apparent what all the fuss was about in terms of this game. It’s possible that it was solely due to the fact that we had 4 of 5 bear cards come out in the first few sets of turns, but the basic game was not good. That’s all there is to it: it isn’t good. Fortunately for Bear Valley, the advanced game is. The advanced game is all that the game should be, leaving the basic game as simply a movement tutorial. The basic game provides very few options in terms of game play and is rather unexciting in general. This is especially discouraging when you’re revealing cards with all manner of fun icons and decorations that are considered only to be “blank” paths. Sure, you still have to build a path to the other side with random path configurations to beat your buddies, but it’s not fun.

Beyond that, the rules are out of control. The rulebook is a whopping 40 pages, albeit with examples and some set-up diagrams for the river. They are somewhat repetitive and generally convoluted. One of the most difficult parts to playing this game is having someone willing to tackle the rules for you. The game itself is not difficult to play, but there are a lot of exceptions to rules based on the hour in which you’re moving or the cards you reveal and when you reveal them. In order to really enjoy this game, giving them your time is a necessity only so that you can move past the basic rules into the various advanced options for play. 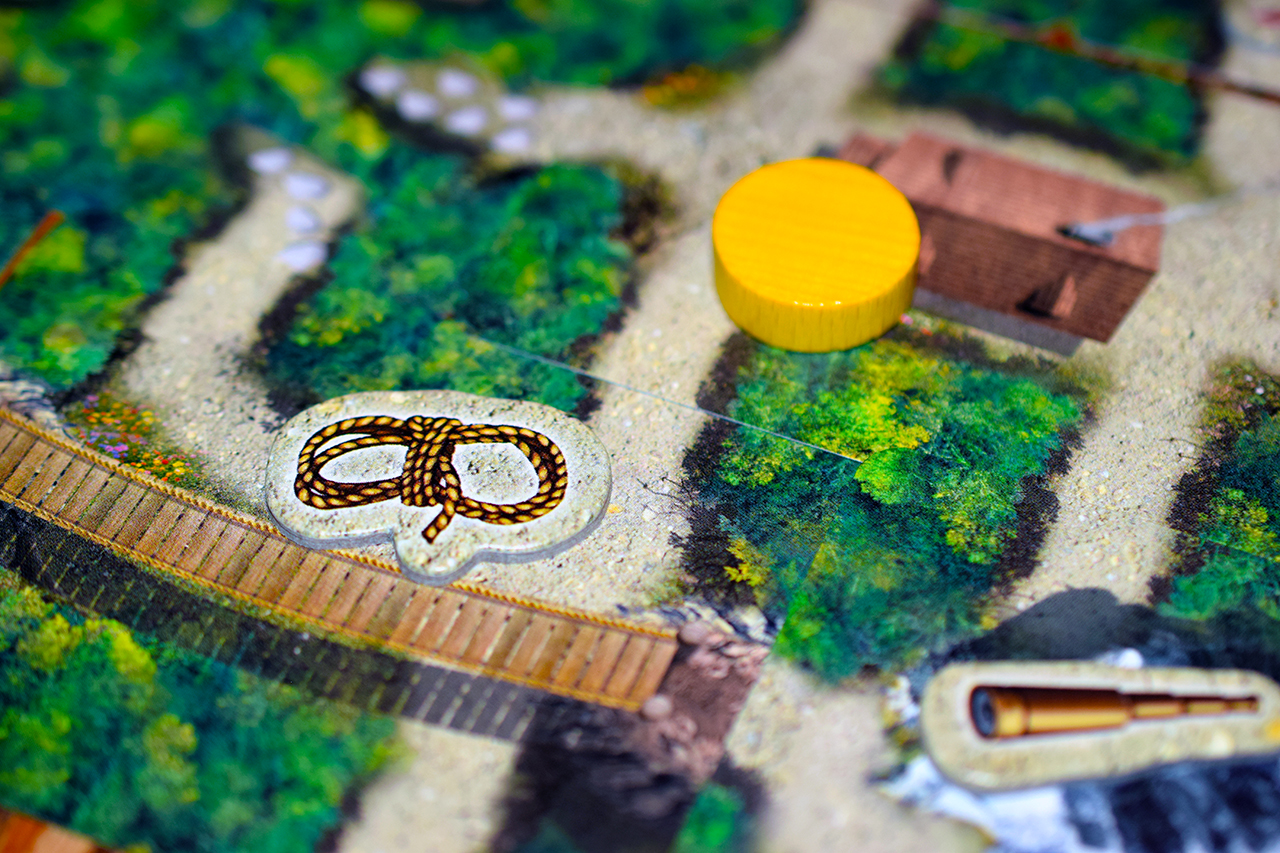 Upon making it through the rules, the advanced game of Bear Valley adds special abilities when starting your turn on certain cards, items that help you keep going when you’re otherwise just stuck watching people play for another turn, and new travel options. The advanced game is more forgiving and allows you to create different paths that would otherwise break the basic exploring and traversing rules. Plus, it gives you options. Maybe you found a canoe and you don’t want to explore for 13 hours or until you get lost – you just want to move a couple of cards to take the boat for later.

The push-your-luck nature of exploring in Bear Valley creates a constant challenge. Perhaps you’ll get a card that doesn’t connect to the path you’re on. Maybe you’ll get lost.  There are quite a few ways to not be able to move, or at least not to go far, but that’s okay. It seems that these setbacks generally balance out between players and that it’s usually a fairly close game. We didn’t frequently run into the issue of having to sit around for multiple turns in a row (except in the basic game), and even if you weren’t moving, chances were that you still got to explore and plot your path for your next turn. Just because you’re ultimately not traversing, doesn’t mean that your turn was wasted.

At the end of the day, Bear Valley is a nice little addition to your game night, especially if you’ve got someone who already knows how to play and can explain all of the need-to-knows from the very long rulebook. Build your map, hide from the bears, and race to beat your friends. 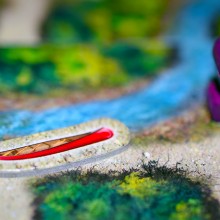 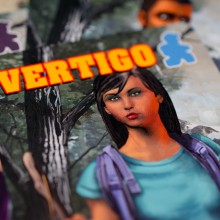 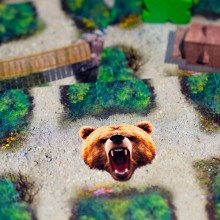 My thoughts on Bear Valley can be summed up simply: it’s pure, dumb-luck fun. Well, first I had to get past that awful art with cards icons that look like they were pulled from clipart. After that, having to digest through an unnecessarily long, convoluted rulebook, and finding a table big enough to play the full version of the game, you really do find yourself with an enjoyable title. It offers simple, but fun decision making that leads to completely random and absurd results. Whether you’re eaten by a bear or are being forced to stop and take in the lake-side scenery, things probably aren’t going to go the way you want them to. I like this game for the fun factor it offers and for the fact that I seem to always want to play another round (it’s fast and generally stupid, in a good way).

Bear Valley received a fair bit of flack during its debut. Several reviewers knocked it for being convoluted, over complicated, and simply not fun. While the rules are a buffet of random variants and possibilities, the initial feedback for the game does not reflect my experience. We definitely had to work a bit to understand the movement, abilities, and oddly designed action point system – with its if/then clauses and random exceptions – but the advanced game has proven to be an enjoyable push-your-luck style game that fits in the “filler” window. The theme is completely bizarre at times, with hallucinogenic mushrooms and magical foxes, and the illustration is bordering hideous, but these faults somehow contribute to its charm. It’s a strange game. It’s a seemingly over complicated game. But it’s also quick and enjoyable when taught by an experienced player and peppered with the variety of abilities and items that provide interesting movement options. Avoid the basic game, don’t look too hard at the character models, and always bring a picnic basket to distract the bears with, and you’ll be ready to explore the Bear Valley.

First Impression: I live farthest away from the league camp (like 7 o’clock away) so I don’t always get to play games multiple times as some of the other league members do. I finally did get my first play of Bear Valley, and when we finished, I remember feeling, well, baffled. The best way to describe it is as if it felt like I played a prototype and had to give my opinion on what worked and what didn’t. The mechanisms are interesting but also confusing. I think my brain was too hung up on the “o’clocks” and how they coupled together with the theme. “I found a trail at 6 o’clock that have 6 pathways, now I’m lost!” (Literally). Also, with a game called Bear Valley, I would expect something crazy to happen when a bear card is found and added to the paths. Nope, they just end your turn and feels like a bear of a letdown. The game does shine, however, when it comes to the multitude of options on your turn. Do I want to veer off the path and grab some gold or that potentially useful canoe, or press my luck and hope I don’t get lost in the valley? To comment on the artwork, the pathway cards are decent, but not the best. There is some nice detail and texture to them, but nothing I could write home about. The character cards, on the other hand, are just… goofy looking, and why not have a couple of gold coins instead of yellow disks? I smell a rush job in that area.

Whenever I play a new game, I am always determining if this is one that belongs in my collection. I try to think of what my family would like to play or my non gamer friends, who just like to play games where you lie, cheat and steal victory (and yet I tolerate their undying love of Sheriff of Nottingham) and go from there. Bear Valley is simple, yet way too convoluted and confusing on that initial first play that it may never get played again. I am open to playing more now that I have the first play under my belt but I really have no desire to add it to my collection.