Last week was awards week it appears with the announcement of both the BoardGameGeek Golden Geek Awards and the As D’or Je De L’annee.

And the winners are….

Also, announced last week was that Colt Express won the prestigous As D’or Je De L’annee 2015 at the Festival International Des Jeux in Cannes, France. On its way to victory, Colt Express surpassed notable games enjoyed here in the US such as Splendor, Five Tribes, Dead of Winter, Machi Koro and Abyss. From what I understand this is a pretty big deal in France. I don’t agree with it at all but congrats to Ludonaute nonetheless!

The structure of Greater Than Games will be changing a little. We will be introducing three imprints: Sentinel Comics, Dice Hate Me Games, and Fabled Nexus. The Sentinel Comics imprint will cover Sentinels of the Multiverse, Sentinel Tactics, and any other games that belong to that universe. Dice Hate Me Games will include previous Dice Hate Me Games titles, such as the recent Brew Crafters and VivaJava: The Coffee Game: The Dice Game, as well as future strategy board games with the same feel of the rest of the line. Fabled Nexus is a new name, and it will be the imprint for future highly thematic science fiction and fantasy games, like Galactic Strike Force!

One of the first questions we anticipate is in regards to the release schedule for any and all announced products. This merger will not delay anything! If anything, it will be able to accelerate a few plans. So if you’re wondering about the current Sentinel Comics preorder, the Geiger expansion for Compounded and its associated reprint, or any upcoming projects, rest assured that only good will come of this.

Next, the people aspect. All of the same people will be doing the same things they’ve been doing along. Chris Kirkman will be directing development, connecting with people, and finding new products. Christopher Badell will keep writing and designing. We’ll have two minds steering the creativity now, and it’s going to be great.

We here at the League are big fans of both companies, so this is welcome news. If you’d like to get some more insight into Chris Kirkman and his publishing philosophies, have a listen to our interview with him on Episode 10 of The Podcast of Nonsensical Gamers.

Late last year, IELLO released a series of small games they dubbed the “Mini Game Series.” The series launched with French versions of Seventh Hero, Sail to India and Agent Hunter. Naturally, since they are the French versions, they are 100% better looking than their ugly US counterparts. IELLO has announced two new games to the Mini Game Series that will also be released in March of this year in the US. First up is Welcome to the Dungeon from Oink Games and designer Masato Uesugi (previously titled Dungeon of Mandom…awesome). According to the BoardGameGeek page:

Welcome to the Dungeon is a push-your-luck dungeon delve in which 2-4 players take turns essentially daring each other to go into a dungeon with less equipment than they start off with while filling the dungeon with monsters. Players can win the game by winning 2 rounds or get eliminated from the game by losing 2 rounds. Each player has a 2-sided players card that has a white side and a red side. The first win taps the player card and the 1st loss flips the card over to the red side. A 2nd loss will have the player turn the card back into the box.

The game is played in rounds. The player sets up the base character and all the equipment equipped. This represents every player as a fully equipped dungeon delver.

Each round, the start player (the person who challenged the dungeon last or the last player to be in a dungeon) can choose to draw a card from the monster deck or pass their turn.

If they choose to draw, they can do one of two things — keep it and remove a piece of equipment, or place it face down in the dungeon. Placing it face down in the dungeon creates the dungeon deck and fills the dungeon with monsters that the challenger will have to face later. If they choose to pass their turn, they cannot participate in the rest of the round. Once only one person is left after all the other players have passed their turn, that player then becomes the challenger and must go into the dungeon with only the equipment he has on him.

The player then flips cards off the dungeon deck and fights the monsters within. Some equipment allows you to nullify the enemy damage, or let you tank it by increasing your HP. If the player survives the dungeon with at least 1 HP, they win that round; if not, they lose. The players then reshuffle all the cards to make a new monster deck and re-equips all the equipment to start a new round.

The game ends when someone has won twice or one player is the last man standing.

The second release is Hope Hwang’s Kabuki (previously titled Illusion) coming in April/May 2015. For more on Kabuki, I defer again to the BoardGameGeek description:

Have you seen that flower in the garden before? Are you sure? To become a master gardener, you must prove that you can identify all blooms you see and remember where they are located, and Illusion will test those memory and recognition skills.

The game lasts three rounds. To set up a round, each player takes 4-5 life points and someone shuffles the flower deck, then lays out the four flowerbeds around the deck. The deck consists of ten different types of flowers, with five cards of each type.

On a turn, the active player reveals the top card of the deck, then places it on top of one flowerbed of her choice. If any opponent thinks that this type of flower is already present in this flowerbed, he can yell “Stop!” If the accusation is true, the accuser takes as many life points from the active player as the number of flowers of this type buried under the top card; if the accusation isn’t true, then the accuser loses one life point, placing it out of the game.

The round ends when one player has no life points remaining or the deck of cards has run out. Players tally their score for the round. The player with the most points after three rounds wins. 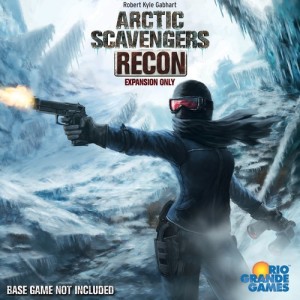 No more Scavenging for a copy

Rio Grande Games announced the US re-release of Arctic Scavengers, the post-apocalyptic deck builder from designer Robert Gabhart. This new “big box” will come with the previously released HQ Expansion and the all new Recon Expansion. For those who already own the base game, the Recon expansion will be available as a stand alone as well. The big box will retail for $50, while the standalone Recon expansion will be $30. Look for these to hit your FLGS this spring.

According to BoardGameGeek News, the first expansion for Star Realms, Star Realms: Gambit Set, will go live this week! It will be available at 12:01am EST for the PC/Mac version, and sometime on Thursday for the iOS and Android versions.

Z-Man is a tease

Finally, Z-Man Games released this image on Twitter this week. I agree with the caption….nuff said.