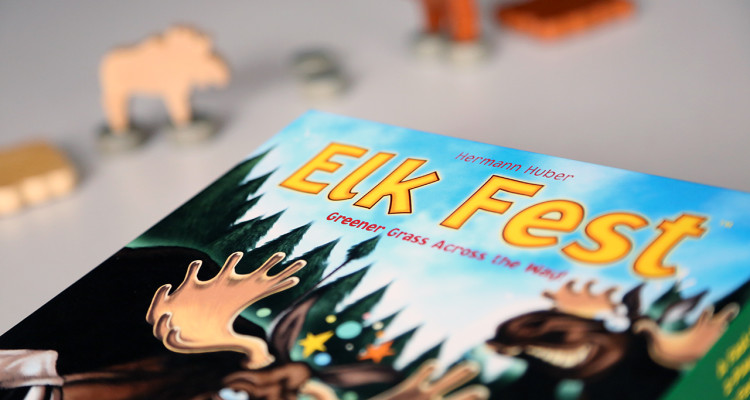 Referring to Elk Fest as a simple game may be an understatement. It has simple instructions, simple design and a simple goal: to traverse an imaginary river and reach the opposing river bank. Each player begins with a moose (yes, in Elk Fest you play a moose) atop a riverbank and 3 stones. In alternating turns, each player will flick the river stones and move their moose along them. That’s it! Simple, yet effective. 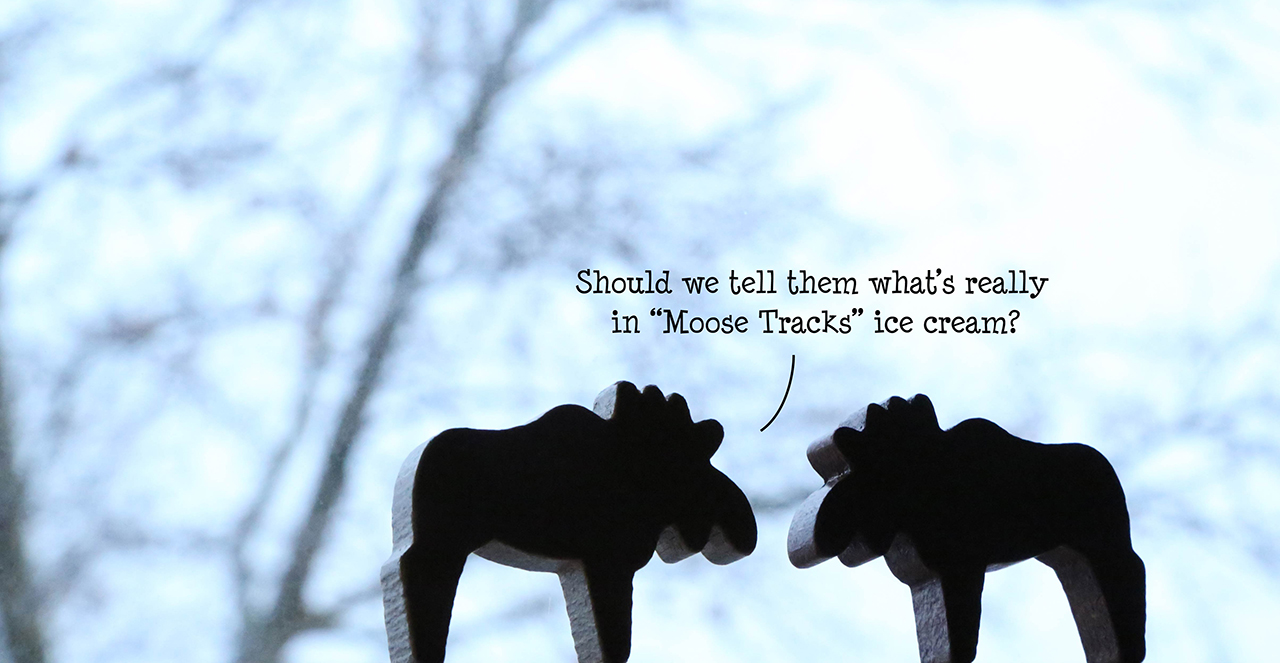 Elk Fest contains the bare essentials. The game contains just 10 chunky, wooden pieces in all—two moose, two flat riverbanks, and 6 grey, cylindrical stones. The riverbanks both have rubber feet so they don’t slide, while the river stones are smooth to improve flickability. The instructions are short and do an excellent job of clearly explaining the rules.

The game is easily portable, however, the box is slightly large considering the contents. Ditching the box for a pouch is an easy fix, but would have been welcomed up front. At $18 dollars, you are paying for the quality of the components, but is still reasonably priced.

On the back of the box you can find some fluff about the world of Elk Fest. You begin to realize that maybe there’s more depth to this game than you originally thought; a larger struggle beset upon these creatures. Then you quickly discover the truth: this game is, in fact, about two moose, Jules and Ollie, staring at each other across a river bank. 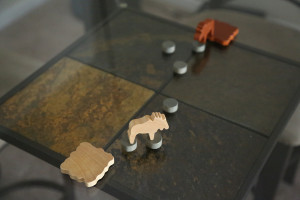 To set up, players place their riverbank on the table. The further apart the riverbanks are, the longer the game will be. For a typical game, it’s suggested that riverbanks be placed 20 or so inches apart, which will equal about a 15 minute game. Each player puts their moose atop their riverbank and aligns 3 stones, about an inch apart, on the right side of their riverbank. The first player flicks a stone, the second player two, and then each player takes turns flicking two unoccupied stones to align with their moose so that the front hooves can reach it to progress. During a turn, players can flick stones and move their moose. A moose can not touch the table surface at any time. If a player drops their moose (“wet moose!”) trying to traverse a gap that was too large, the moose and stones are placed in their original positions, your turn ends, and the opposing player is rewarded 3 stone flicks. The first player to reach the opposing riverbank wins. 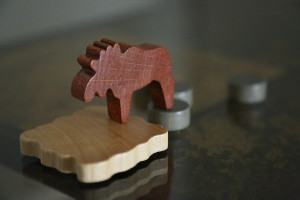 The game is obviously designed for two players, but the instructions do include a “lowest points” variant for more than two players or to tally up multiple rounds. While some is present, there is minimal strategy involved. It generally boils down to who is a better flicker, however there are times in which stones will end up, whether purposefully or by accident, behind a moose, making forthcoming flicks difficult. Generally speaking though, this is a game you can turn your brain off and just flick to your heart’s content (as long as your heart doesn’t desire more than two or three flicks per turn).

Elk Fest is a game that is easily learned, so it’s great for all ages. With only a handful of pieces and minimal set-up, it can easily be transported and played anywhere there is a smooth, flat surface. It’s a great game to play when you want some mindless fun between other more complex games. While Elk Fest is a simple game, it is a great addition to any collection.