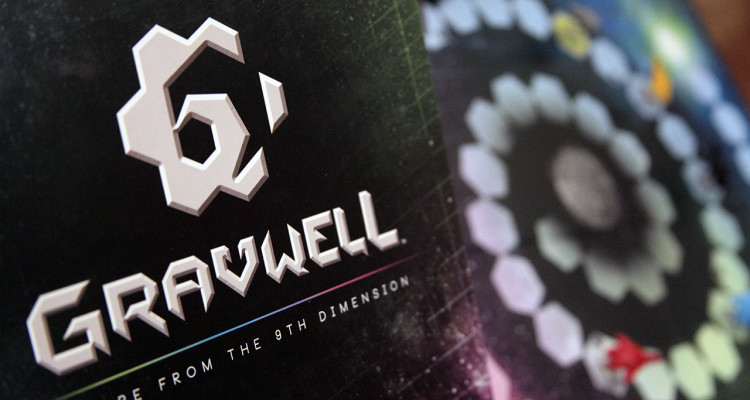 You and your crew have hurdled through a black hole, through time and space, before ending up here, in the 9th dimension. In the distance you see the soft glow of a warp gate – a portal home – but your ship and its crew are trapped in the cylindrical pull of a Gravwell. Within this anomaly, you must succumb to the gravitational pull of the objects around you, only moving in the direction of the closest mass. Can you harvest enough fuel from nearby asteroids and navigate your ship home, or will you fight against the physics of this strange universe, only to end up stuck forever within the singularity? 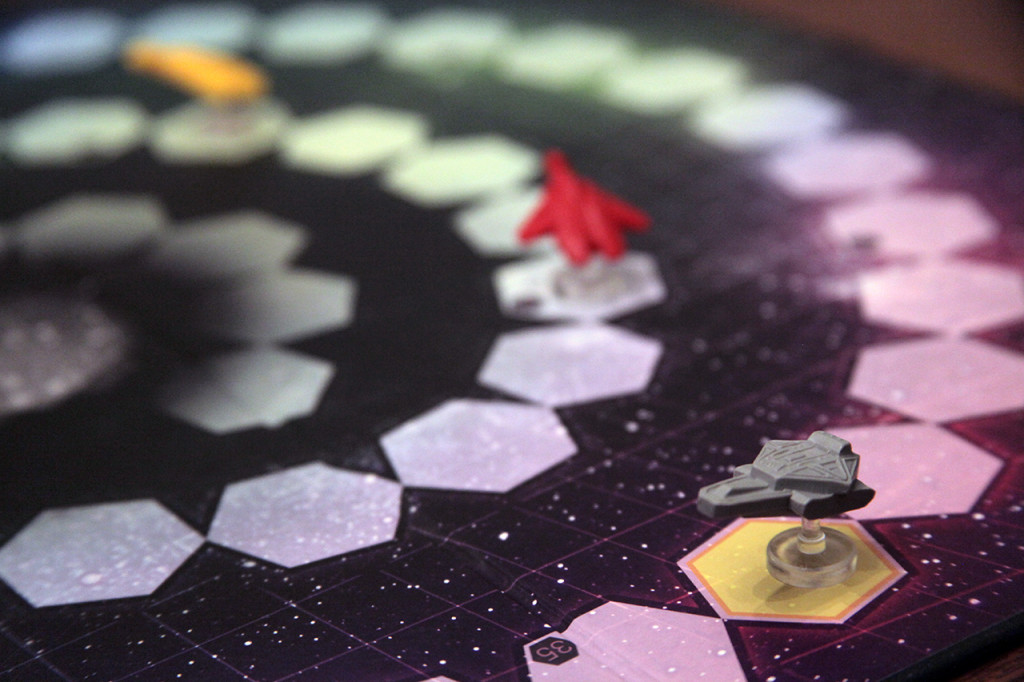 Gravwell: Escape from the 9th Dimension, designed by Corey Young and published by Cryptozoic Entertainment (DC Comics Deckbuilding Game, Adventure Time Card Wars, The Doom That Came to Atlantic City), is a sci-fi card drafting game for 1-4 players. In Gravwell, players will draft pairs of fuel cards and play them simultaneously with other players in an attempt to propel their ship forward and through the Warp Gate at the end of the board.

Game components consist of 26 fuel cards, each with their own alphabetized periodic element, a game board, four plastic player ships, two plastic derelict ships and a turn marker. While the game is reasonably priced at $35 MSRP, the components are minimal and favor function over form. That being said, the pieces will hold up to multiple plays and are completely functional, they’re just not particularly enticing.

The real reason why Gravwell will hit your table is the unique movement mechanic and the use of card-drafting to mediate those movements. 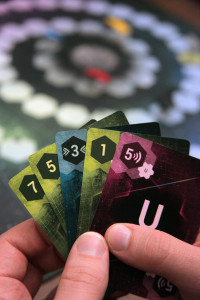 Set-up for Gravwell is quick. Players place their spaceship pawn in the center of the board, inside the singularity, and retrieve their color-specific “Emergency Stop” card. Depending on the number of players, NPC derelict ships are placed on one or both of the indicated board spaces. Pairs of movement cards (three times the number of players) are dealt into a communal area, one card face-down and one card face-up on top. Play in Gravwell takes place across two main phases: the drafting phase and the movement phase. During the drafting phase, each player will take a turn drafting a pair of cards from those available. This will continue until all pairs are chosen, giving each player a total of 3 pairs (6 cards). These six fuel cards will constitute the player’s movement options for the round, and will be kept hidden from the other players. During the movement phase, players will simultaneously choose and reveal one fuel card, then execute that movement pattern. Players activate their movements in alphabetical order according to the periodic element featured on each card. Their ship then moves in one of three ways: 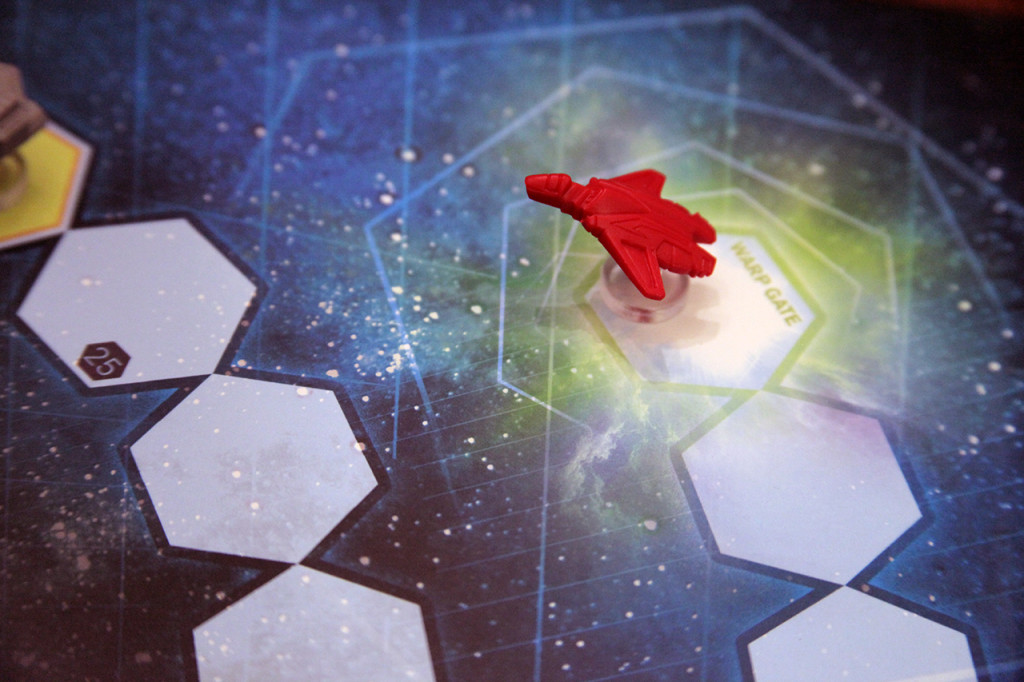 Players will repeat this simultaneous reveal-and-move pattern until all six cards have been used. At that point, the fuel cards are reshuffled and play continues with the drafting phase. The game continues until one player reaches the warp gate or six turns have passed, at which point the winner is whoever is furthest along (although you really all lose because you’re stuck in the 9th dimension).

Gravwell is a simple design with a mind-bending mechanism for movement. With the available options, forward movement is never guaranteed. It requires careful planning and a little bit of luck to make sure that you move the correct direction, at the appropriate time, and end up where you want. The use of card-drafting further emphasizes the mix of strategy and luck, as only half of the cards available to draft can be seen. One card of each pair will be face down, meaning you may get a card that wrenches your plan. The Emergency Stop card, which can be used once per round to cancel your movement, becomes a lifeline; it can often be the difference between forward progress and accidentally moving 10 spaces backwards. With four players, Gravwell becomes a bit of a crapshoot, as the amount of hidden information and possible outcomes becomes difficult to calculate. It often becomes a game of mitigating the bad, rather than maximizing the good. With that in mind, the game could be incredibly fun or quite miserable with four players, depending on your preferences. Gravwell is quick, so treating it as a light and random game for you and your buddies will offer the best experience. Emphasizing competition may leave you trapped in a singularity of frustration. With less players, the game becomes more predictable, tactical, and balanced. This is a positive for those more inclined to this type of game. Movement is often very swingy though, with each player slingshotting off of one-another (Shake-and-Bake!). This has, in our experience, made for very close games that can come down to one final fuel card. 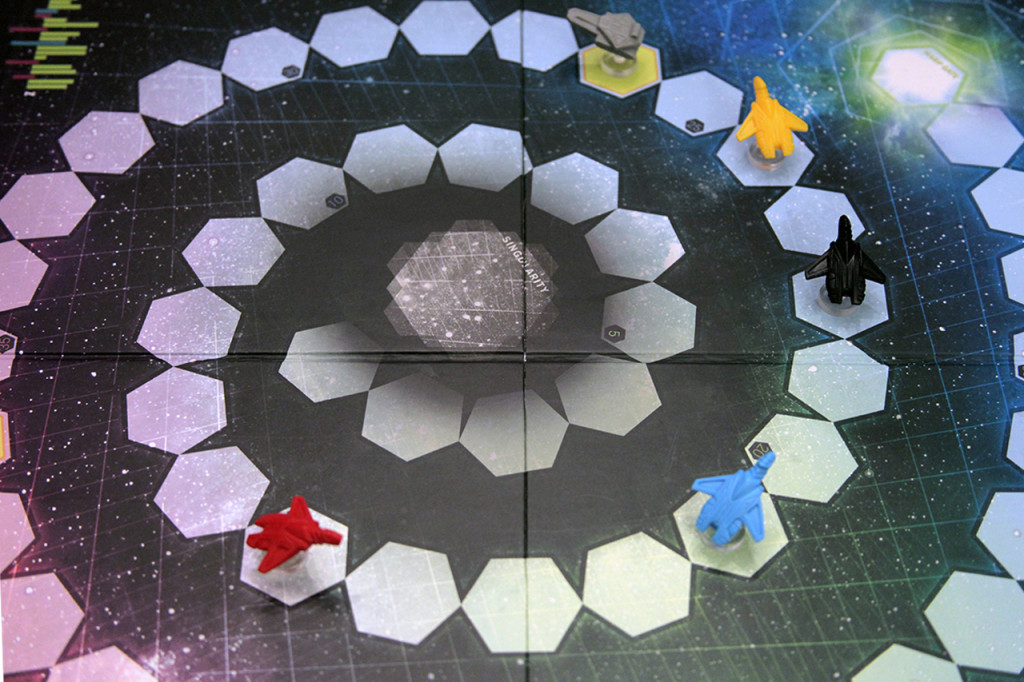 Overall, no matter the player count, the game seems to be quite balanced. With each ship moving toward the next closest, runaway leads are near impossible. Getting too far ahead will almost guarantee backwards movement. There are repulsion cards, but they are few and players often jump at the chance to draft them. Gravwell has proven to be a fast and potentially chaotic game that is approachable by a variety of different players. Player count variations will provide different experiences, but the game is a lot of fun across the board. The components could be considered somewhat generic, but the price point seems appropriate and the mix of random and strategic gameplay makes the game feel fresh, even after repeated plays.

“Jane! Get me off this crazy thing!” is generally somewhere in my thought process about halfway through the standard game of Gravwell. After ricocheting back and forth around the singularity, I could do with a nice cup of tea and a lie down, if only the universe would stop spinning. The mechanics of this game are unique, and are indeed fun, but only in low doses. This isn’t one of those games where I’ll agitate for a second playthrough straight afterwards, but I’ll give it a willing shot when it comes up. This game gets one thumb up in the.. well… the Gravwell category, because I’m not sure where else to put it. There’s too much of a headache involved for a light game, and it’s a bit too simple for the next step up.

The gameplay in Gravwell still scrambles my brain, even after a dozen plays. I never quite know where I’m going to end up, which is both hilariously fun and aggravating. While the strategy appears to be there, or at least seems like it should be there, I never feel in control. I suppose this is quite thematic, but it also can spoil the game a bit if I get too entrenched in trying to win. With a clear mind, though, it really is good fun. I’d like to make a note about the physical game – I don’t much care for it. At $35, the components are adequate, but I find the construction and design of the pieces to be uninspired. I leave this as a side-note in my ruling because I’ve found that few others share my opinion, so maybe I’m just being too picky. I would be much happier springing an extra $10-15 for some board art, different ship models, or something a little more flashy.

Being the frontrunner in Gravwell is like taking an early lead in Mario Kart: it seems like a spectacular idea, until a blue shell becomes your nightmare. In the case of Gravwell, nightmares are born of the periodic elements, particularly those that send you flying in the wrong direction. The forward/backward movement mechanic can really turn your world topsy-turvy. Being well ahead of the pack tends to be an unattractive option because you move in the direction of the nearest ship, even if it’s behind you. On the contrary, though, this almost elastic, slingshot movement aids in keeping the race closer than you’d initially think. Balance is something that Gravwell does…well, for lack of better word. Drafting card pairs (one face up, one face-down) creates a bit of uncertainty, but is countered by knowing (and hopefully remembering) what everyone else is picking up. Luck plays a part in all aspects of the game and can occasionally become irritating. Things will become particularly chaotic when there is a cluster of ships. “Tractor beam. Sucked me right in.” As a fan of abstract games, Gravwell pulled (and pushed) at my heartstrings, but its distinctive movement mechanic and well-balanced gameplay didn’t particularly grasp me in the end. I didn’t dislike it, but I never felt engaged; rather, as if I was just floating along.

This game was definitely something new for me. The movement was both very neat and incredibly irritating. The space ship pawns killed me. Every time I thought I had an edge, I was thwarted by being closest to a phallic ship behind me and being slingshot backward. This game is fun, I didn’t hate it, but I don’t know that it’s one I want to play all day every day. The element of only knowing half of your opponents elements (if you can remember them) allows for a little bit of strategy, but there is still room for luck/error in that they could pull something totally crazy on you and you end up in the wrong place in space.