We shine our spotlight on the deepest corners of the crowd-funding universe, so you don’t have to! This week, check out a new entry in the Keyflower lineup, a blast from the past with the Lone Wolf board game, and a 4x head-to-head game set in the Traveller universe.

Lone Wolf – The Board Game

First published 30 years ago, the Lone Wolf series of gamebooks have introduced the world of Magnamund to millions of devoted players. Now, illustrator Gary Chalk has designed a wargame set in the same universe, and is funding it through Kickstarter. Designed for two players, the Battle for Magnamund pits good against evil, letting you recreate any of the battles from the Lone Wolf series, and offers a number of original scenarios to play through as well.

You are Lone Wolf, the last of the Kai Lords. Or perhaps you are Prince Pelathar, heir to the throne of Sommerlund. Or maybe you are the infamous Giak warrior Kootak, sent by the Darklords to raze the land. Now you can be all of these . . . in a hand-painted tabletop wargame.

One of these days, I’ll get around to figuring out how to actually play Keyflower, but until then, I can at least show you the brand new expansion to this well-received worker placement game. Following on the heels of The Farmers, Keyflower: The Merchants adds additional depth and complexity to an already chock-full game.

Contracts can bring in some much needed resources, for example, but why not hold on to them for valuable points at the end? There are also Cabins that allow for more upgrades and Extensions that double the fixed point scores of some tiles. This new addition to your collection will see you having to master the game all over again.

I’ve loved the Traveller universe and system for absolutely ages, from its quirks (your character can actually die during the chargen process!) to the strengths of the stories that it can tell. As a result, this is a game that I want to love, but I’m just not sure I can navigate the oddities of this campaign.

First off, for a two-player game, they want an $80 price point, and are offering two ‘expansions’, each supporting an additional two players for $30 each. Given what they seem to be including, that’s a bit excessive in my mind. Additionally, there are only two factions included in the base game, and to get some variety as they suggest, they want an extra $10 per faction. Admittedly, you get to create these factions from a list of special abilities, but a few choices out of the box would go a long way here, I think.

Finally, there’s the Collectors Edition at $150… giving you everything at the Deluxe level ($120), but also including a special, in-game ability for yourself. What, are we at the pay-to-win stage of board games, too?

Traveller Ascension: Imperial Warrant is a chance to carve out your own piece of the cosmos. You have been tasked by the Emperor to move into a new sector of the galaxy: Use your newly-acquired Imperial Warrant to Explore, to Expand and to Exploit this new area for the glory of the Imperium…and for your own fame and glory. 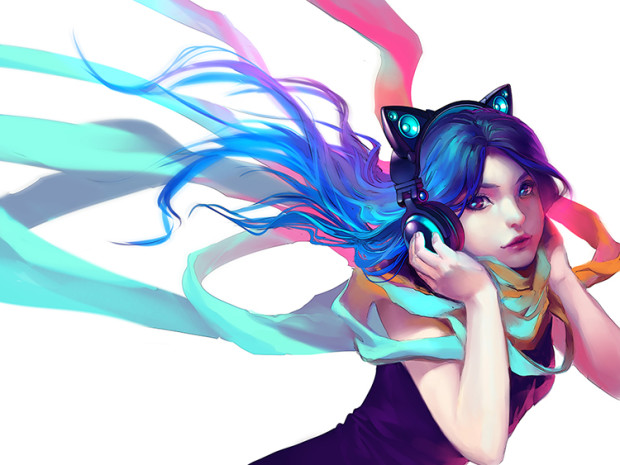 And now for something, completely different. Headphones with built-in cat ear speakers! Yes, you heard me right..

I just found out about this project, so there’s only about 15 hours left to go, and they’ve already raised $2.5 million above the original $250k that they were aiming for.

Sadly, I’m not a cute Asian girl, so I doubt these will look half as awesome if I were wearing them, but it’s still awfully tempting. 🙂

Presenting Axent Wear, glowing, badass headphones that let you blast your music and express your style. Help us make these into a reality by donating to our campaign. We need your support. Without you, none of this would be possible.