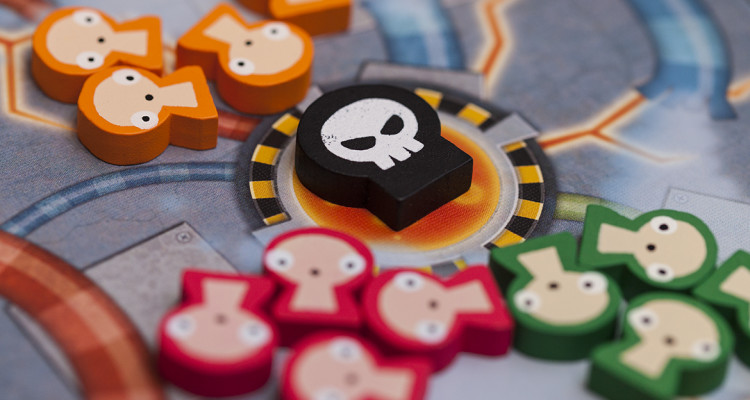 Lift Off! Get Me Off this Planet! | Review

Meanwhile, in the Core maintenance labs, Great Alien Council member Oliver notices something weird sticking out into the hallway. “Hey, Bob, what’s this cord sticking out here? Why is it unplugged? Bob!” Hmm; it’s labeled… coolant? Does that say coolant!? “BOB! We have to go. NOW.” Oh man, GET ME OFF THIS PLANET!

What A Lovely Planet We’ve Got Here

Lift Off! Get Me Off This Planet! is a family-style race game from designer Eduardo Baraf, with bright and engaging art by Nichole Kelley. Your main objective is to get all of your cute little aliens (alieneeples!) off their home planet before it tragically explodes.

The planet board is built from modular tiles that alternate between Exit Points that lead from the core of the planet and Lift Off Points that allow you to toss your alieneeples safely from their volatile home. The game comes with multiple Lift Off Points that operate at varying levels of difficulty, thus allowing you to change the board from game to game and tailor the available options to your liking. They each work in different ways and will require varying numbers of resources, die rolls or even other alieneeples to activate. The ability to change the Lift Off Points – which can even happen during the game with certain action cards – allows for more replayability and customization of the play experience. The board tiles are heavy cardboard that fit together like a puzzle, allowing for a stable board throughout play, even if you’re swapping out tiles mid-stream. 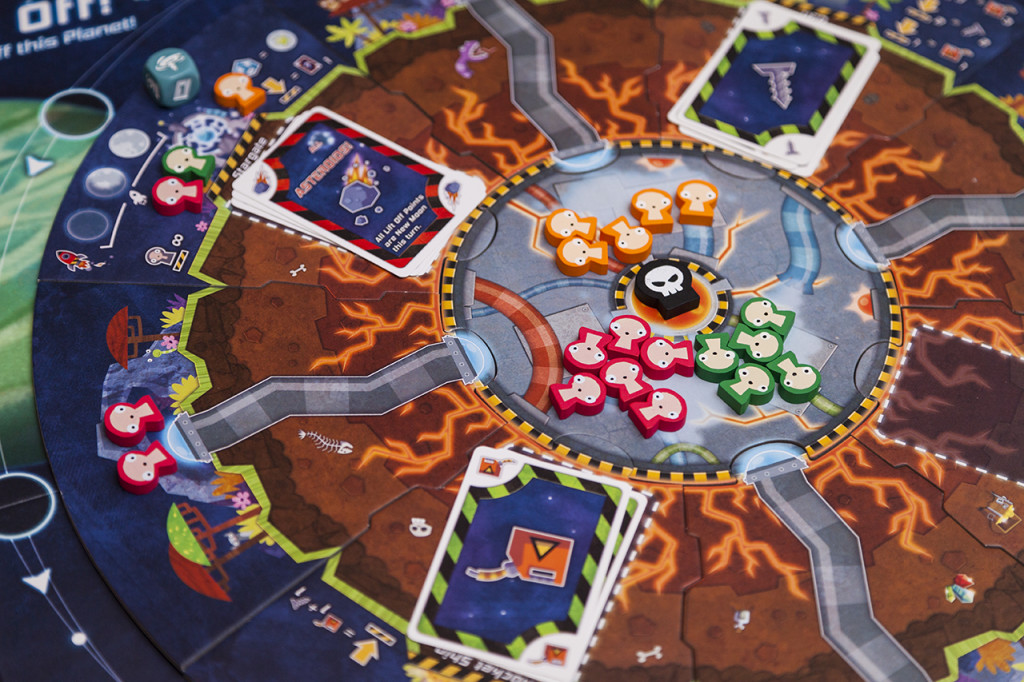 Surrounding the gorgeous and lively planet you’ve created, a circular track represents the phases of the moon. At the end of each player’s turn, the moon token will advance along the moon track to signify the passage of time as your imminent doom approaches: each full cycle around the board is one full day. Additionally, the phases of the moon, with relation to each Lift Off Point, determine the cost for launching the alieneeples on that launch pad. Similarly, there is a day track in the corner of the board that, using the sun token, will help you to track how many days you’ve been trying to get off this forsaken rock and just how long you’ve got left. Each time the moon makes a full rotation, this track will also advance. When the sun token reaches the explosion point the game ends immediately – sorry little guys still waiting for lift off!

Seriously, How Do We Get Out of Here!?

Game play progresses through the playing of cards in order to activate Lift Off Points and get your alieneeples off the board. The draw deck consists of two types of cards: resources and actions. On your turn you will draw two cards, and then take any of the following actions in any order:

In order for a launch platform to Lift Off, all conditions for it must be met – the correct number of cards on the Lift Off Point, the necessary die roll (if one is needed) and the right phase of the moon. As soon as these conditions are met, lift off occurs, regardless of whose turn it is or the phase in their turn. 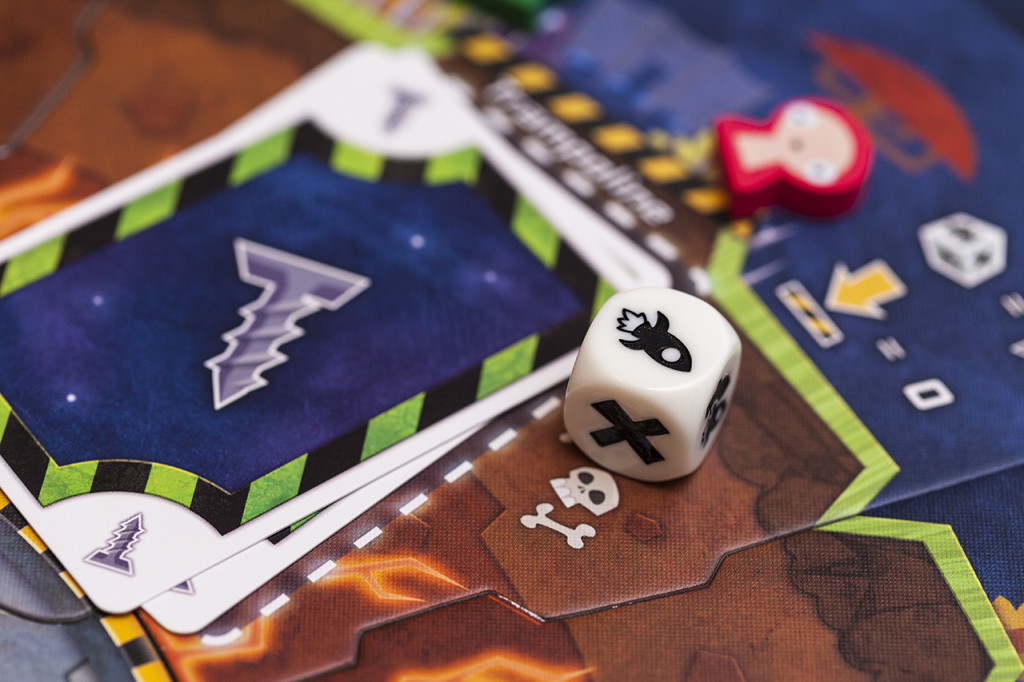 You are victorious if you are the first to get all ten of your alieneeples off the dying planet. Alternatively, if no players succeed in saving all of their alieneeples, you win if you have successfully gotten the most to safety by the time the planet explodes.

Let’s Reflect On That Adventure

Lift Off! Get Me Off This Planet! is a great family game and an excellent race game, with kind of an introduction into worker placement games. The art is appealingly bright and the alieneeples are fun to manipulate during gameplay; they provide an inviting and basic way to get acquainted with the decision making involved with this popular mechanic. Playing this game is fast and easy once you learn the rules, and, in the vein of the worker placement mechanic, it allows you to quickly understand the value and costs of the various Lift Off Points so you can adjust your strategy to maximize alieneeple rescues.

The game also allows players to be as competitive as they like. In regular gameplay, Lift Off Points are often shared between players, resulting in some inherent cooperation between them. However, through action cards that may, for example, move the moon or send alieneeples that aren’t yet strapped into a launch pad back to the Core, you can specifically play against your opponents. Moreover, the designer has included several variants for gameplay that include more cooperative play (Family Fun & Let’s Team Up) to try to save as many alieneeples as possible and also every-man-for-himself hyper-competitive play (Cutthroat Planet).

With that being said, there are a few areas that may frustrate players throughout a game of Lift Off! The card draw is random, but the distribution of the cards in the deck, depending upon the number of players in a game, might leave you wanting for more resources or something to do. This can be remedied with the ability to trade in cards on your turn, but that takes time that you don’t really have as the moon continues to circle the planet.  Further, changing Lift Off Points during the game can become cumbersome in a game in which you’re already crunched for time. This is a competitive maneuver that you can employ to throw off your opponents, but it can really disrupt the flow of the game. One instance of this, in particular, is the use of the Stargate Lift Off Point, which might terraform itself regardless of how a player might use it.

Regardless of its room for growth, Lift Off! Get Me Off This Planet! is a versatile addition to your game collection that will allow you to include gamers of all ages and skill levels in a frantic race to escape imminent doom. 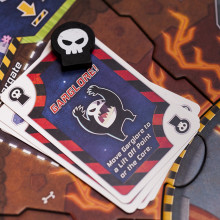 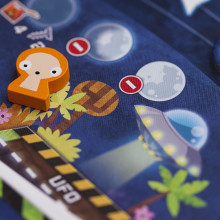 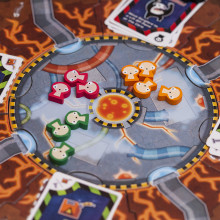 Supported by the bright and silly art, the first thing I recognized about Lift Off! was the humor found throughout the game. From the box and board, which sport a frantic little green alien man, to the ridiculous ways you’re actually trying to escape the time-bomb homeworld (trampolines, slingshots and stargates!), the entire game is tongue-in-cheek in the best way. This really complements the simplicity of the gameplay, as each turn you’ll generally be moving an alien or two and playing a few cards. Unfortunately, this is simultaneously one of the weaker points of Lift Off! as behind the goofy veneer, you realize that you don’t really do a whole lot turn to turn. There is a nice element of semi-cooperation with the Lift Off Points and the event cards introduce an enjoyable “take-that” component, but the duration of the game feels consistently the same.

With limited ability to alter your basic actions or gain additional cards, you’re often restricted to a limited number of options, which can be planned out several turns ahead with little interruption. The revolution of the moon does add some welcome strategic planning to the game, but all-in-all Lift Off! feels predictable after several plays. Though the game is definitely fast enough to warrant some occasional table time and the theme is wonderful, it doesn’t provide enough innovation mechanically to warrant too much attention. I had a legitimately fun time playing the game and will happily give it a go whenever someone wants to try it out, but it won’t be one I’m begging to play down the road.

Lift Off! is a great family friendly game. The amazing alieneeples and the vibrant and inviting board/card illustrations will be sure to attract children of all ages to the table. Mechanically speaking, Lift Off! provides a sound introduction to worker placement and action point allowance for younger gamers. Hardcore gamers will likely find the randomness of the card draw and the “take-that” elements frustrating at times. The theme is where the experience really shines though. I had a blast physically launching my alieneeples from the board into my score pile and creating back stories for each one as they escaped. While I would not fully endorse Lift Off! for more seasoned gamers, I believe it is a great addition to the collection if your primary gaming group consists of younger and/or more casual gamers.