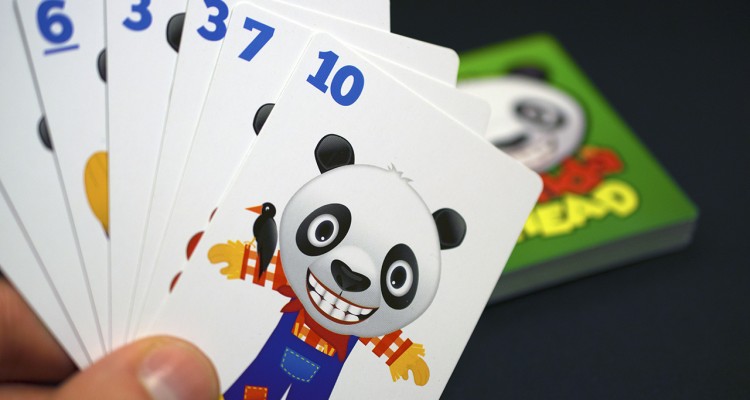 We would like to formally extend an invitation to the Second Annual Panda Costume Party! We loved your submitted costume idea – a panda dressed as a mermaid!? Fantastic!

The event will begin promptly at 7:00 and it will be a non-stop ‘til we all drop! Don’t forget to bring your camera, you won’t want to miss the Meet-and-Greet with last year’s winner, complete with her hilarious turkey costume!

We look forward to seeing you there!

As the gaming market continues to bloom, designers and publishers work hard to stand out. One way is to invent, to create something completely new, much like Dominion did with deck-building or Risk: Legacy did with Legacy-style games. Most others look to innovate, to take something established and twist it for the better; this is where Panda Head, a family weight trick-taking game from Aaron Weissblum and Norman Woods, finds its footing. It takes the classic trick-taking formula and zeroes in on the hand management aspects, as opposed to collecting the tricks each round. 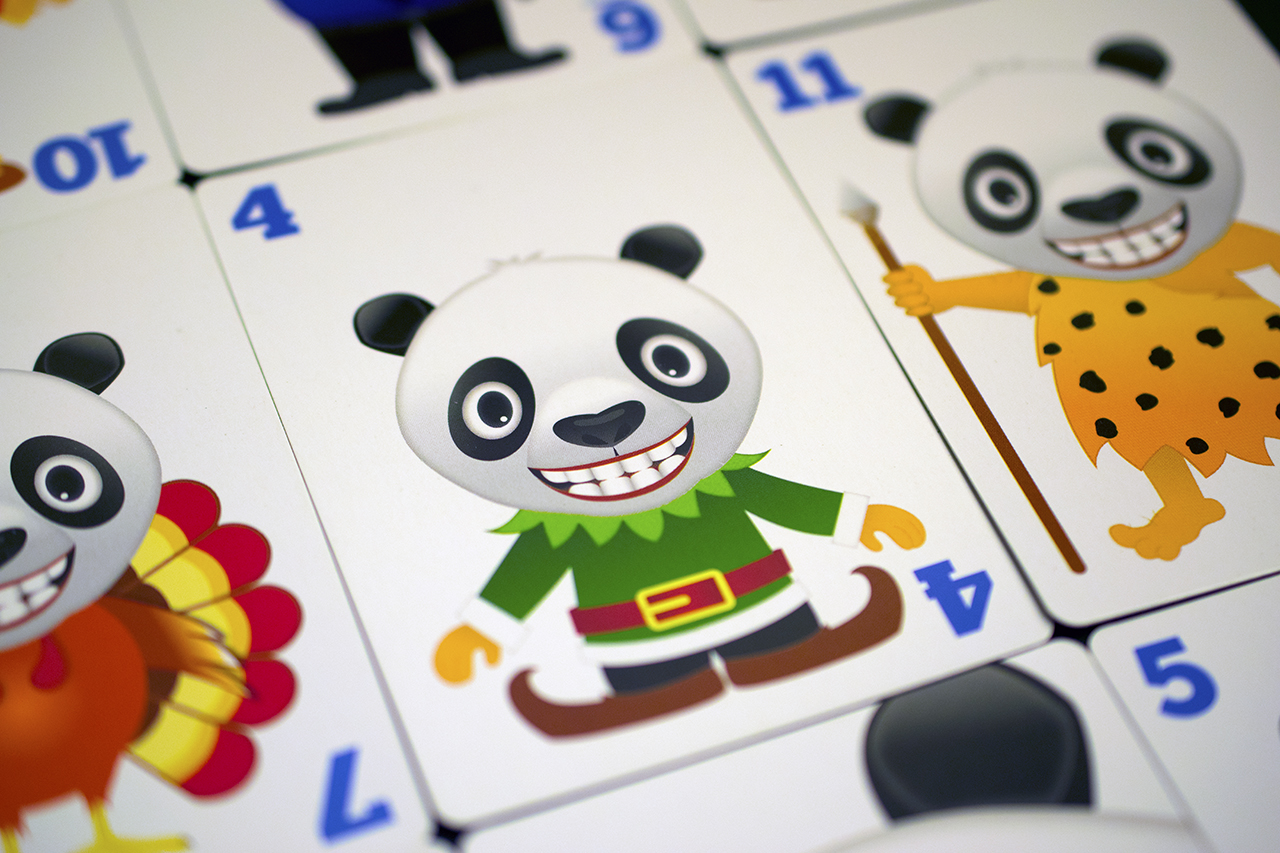 One of the best elements of Panda Head is how easy it is to explain and teach. Each round, players are randomly dealt a hand of 7 cards. Cards are numbered 1 through 11, with two special cards, the “Panda Head” and the “+2”, thrown into the mix. A game round consists of 7 tricks, and each trick the lead player opens with one of his or her cards. Continuing clockwise, each subsequent player must follow by playing a card of equal or greater value OR, if unable or unwilling to, the lowest card currently in his or her hand (we’re on the honor system here, folks).

Once each player has contributed a card, the highest card played wins the trick, with ties going to the player who played most recently. Winning the trick doesn’t actually matter for the first 6 tricks, though, because scoring only occurs on the 7th and final trick of the round. The player who wins the 7th trick earns points equal to their card’s value. Points in Panda Head aren’t beneficial, though; once a player reaches 21 points, they’ve become a “drowsy panda” and their score is reduced to the next highest player’s score. Hit 21 points again and you’re a sleepy panda! No more Panda-Coladas for you.

The game continues in this fashion until only one panda is left partying.

There’s not a whole lot to Panda Head, which is actually what makes it such a successful game for families. The rules are easy to grasp and the card play is fast, so you don’t have to worry about a mixed group of ages or skill levels feeling put-out at any point during the game. The primary decision point is how to engineer your hand of seven cards in a way that leaves you with a low card at the end, thus allowing you to avoid points. At times, a savvy player can go on the offensive a bit, trying to draw out certain valued cards to force their opponents into no-win situations.

There’s no set collection, Queen of Spades to avoid, or any mechanical frills to get in the way of this basic goal, aside from the two special cards mentioned previously. The first, the Panda Head, always acts as a value 1-greater than the highest card played. It’s powerful and is typically a good idea to save in case you get in a pinch later in the tricks. Don’t hold it too long, though, or you could end up stuck leading a trick you’d rather not, or even winning the last trick automatically, if it’s your last card. The “+2” card is played in tandem with another card and, you guessed it, adds 2 to the value of that card. It also lets you draw a card to replace having played two in one trick, which can be fantastic or terrible depending on the draw. You have to be careful of when you play it, as to not get stuck drawing a problematic card that you hadn’t originally accounted for in your planned sequence of play. Both of these cards add a nice mix to the gameplay and keep the other players guessing throughout. 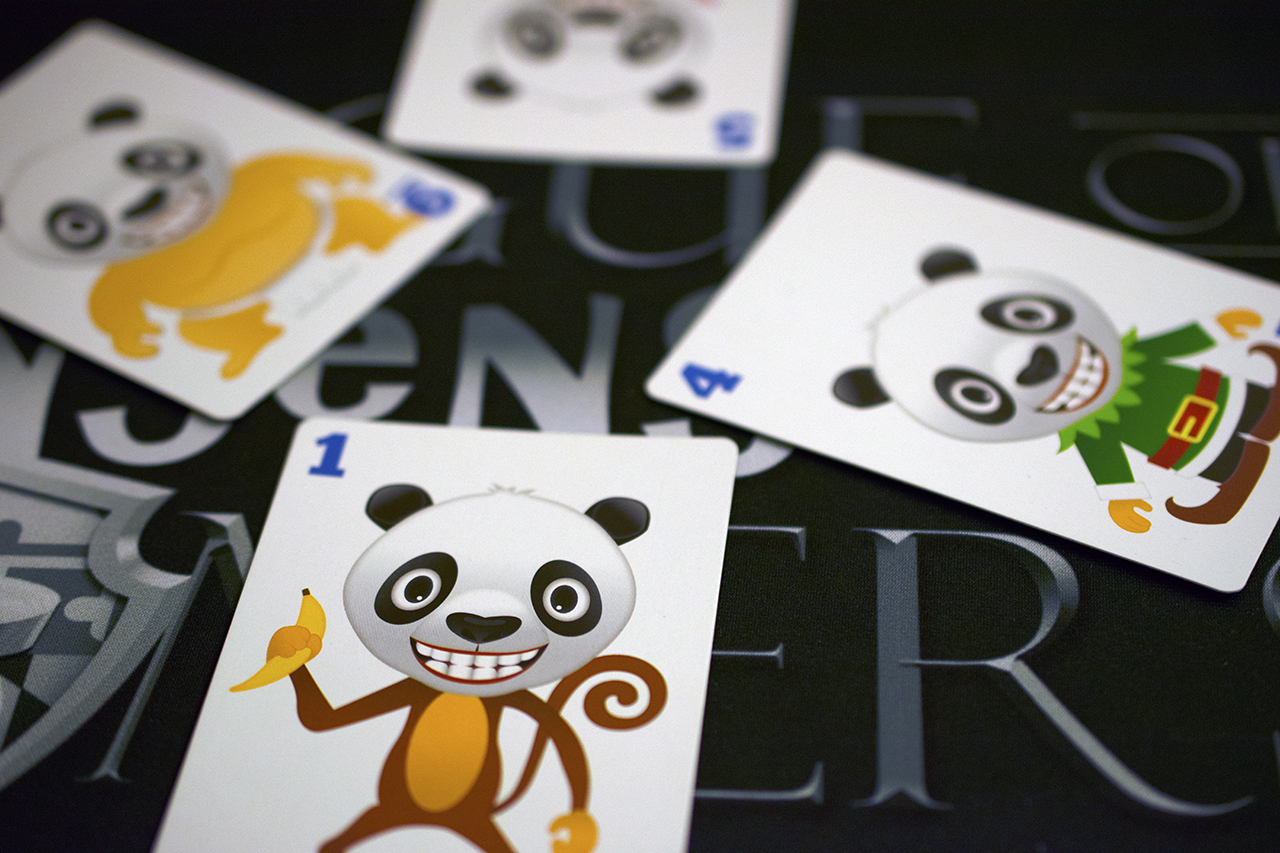 All Pandas Are Now Suspicious

As with any card game, trick-takers in particular, the random draw each round can be a fickle friend. While most games average out, a hand with every card valued over 5 or 6 is almost certainly a loss, so your job then becomes to mitigate the points that will be taken. Similarly, being dealt all 1s and 2s means you can go on autopilot, basically having nothing to worry about until your next hand is dealt. There’s not much you can do here; you either accept it as a reality or pass because of it. I wouldn’t say it’s a deal-breaker.

What I feel must be discussed, almost as a warning or Public Service Announcement, is the complete low-ball of the game length on the box. It is listed as 10-20 minutes, but I can only safely assume that R&R Games meant “per player.” Having played Panda Head several times, including one game where we played as fast as possible for 20 minutes (we timed it), I have never had a player go out within that time frame. Note that I said “a player.” This game is played until all but one player goes out. For whatever reason, this family weight filler game takes an inordinate 60+ minutes to play with 3 or 4 players. This is partly because each player essentially gets a do-over if they hit 21, getting to drop their score back to potentially zero points. While it’s more likely that you’ll drop back to around 10 points or so, there is a potential for Panda Head to end up being a very lengthy game.

And no, I don’t necessarily have a problem with an hour long family game, but Panda Head simply doesn’t have enough meat to support player’s interest for that amount of time. It’s a great twist on trick-taking and one I really want to like, but it’s also a game that I refuse to play without house-rules or a strict game timer. I’d much rather have the game end too soon and play it again, than have it run far too long and have to petition the group to end early (which we did at one point).

Keep it to its intended play time and this oddly themed, festive Panda trick-taker is a solid option for family game night. Push it too far in an attempt to follow the prescribed structure, and you may pass on it in the future for something that naturally hits the filler sweet spot without modification. 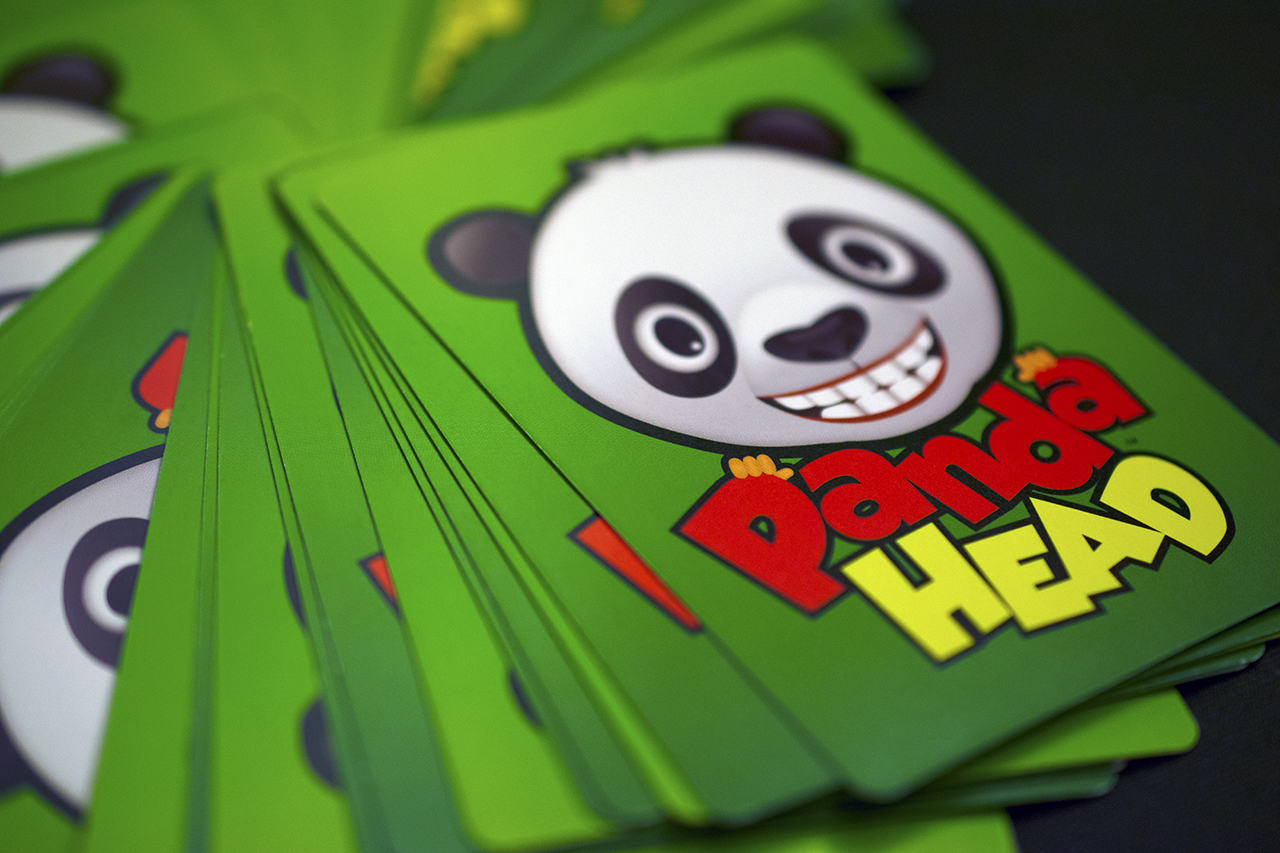 As a trick-taking game, Panda Head is wonderful. I really appreciate the speed with which you can play the game as none of the tricks matter until the seventh. I think that is excellent. It also makes it a little bit easier than games like Hearts in which you’re trying to plan for the end of the game as far as set collecting or avoiding a suit. You only have to worry about the numbers as far as taking or not taking a trick. Plus, the panda head and “+2” cards are immensely helpful if not completely game-changing at times. Unfortunately, the quickness from round to round is lost in the scoring. As Matt stated, we only had a game last 20 minutes when we set a timer on my phone and called it quits. I think that in the multiple times we’ve played, we’ve only even had a drowsy panda once or twice, honestly. The scoring contradicts the light, quick feel of the entire remainder of the game and that’s a big bummer. I really enjoy playing this game and I highly recommend it to anyone who is looking for a light card game or a different take on a trick-taking game. I will be sure to tell anyone who checks it out that the scoring might need some individual consideration from your board game group to ensure that everyone isn’t trying to strangle each other over the game that just won’t end, though.

It’s a game, I suppose, and the artwork is kind of cute? As was mentioned above, the rounds really felt like they played themselves; without suits or any other differentiation between the various cards, it came down to just the value of what you were dealt.

Panda Head is billed as a quick, family friendly, trick-taker that is both easy to learn and play. The trick-taking feels much like Hearts where gaining points is bad but adds a twist with special cards. You will need to manage your hand as the round progresses so that you have that perfect card for the final trick. I really enjoyed that aspect of the game, but it also was the most frustrating. It also feels, at times, that the first six rounds are essentially meaningless, but you will come to realize that this will give you some information on what cards your opponents may be hanging on to. This introduces some interesting strategies. The game length, as mentioned by my fellow league members, is absolutely baffling. I would highly recommend creating a house rule as to when the game should end instead of following the rules. It is a fun game but who wants to play an hour plus of “pick-a-card, play-a-card?”