To stay alive, you must force others to face the dead while avoiding the encounter yourself. “Whoever disturbs the rest of the ancestors by revealing their skulls, will immediately lose one of their lives…” (excerpted from the journal of Joseph, shared in the rule book)

Skull is a simple game of bluffing, betting and reading your opponents. Designed by Hervé Marly (the Werewolves of Miller’s Hollow, the Phantom Society) and beautifully decorated by Thomas Vuarchex (Jungle Speed, Bugs & Co), Skull is actually one of a few variants of this game. 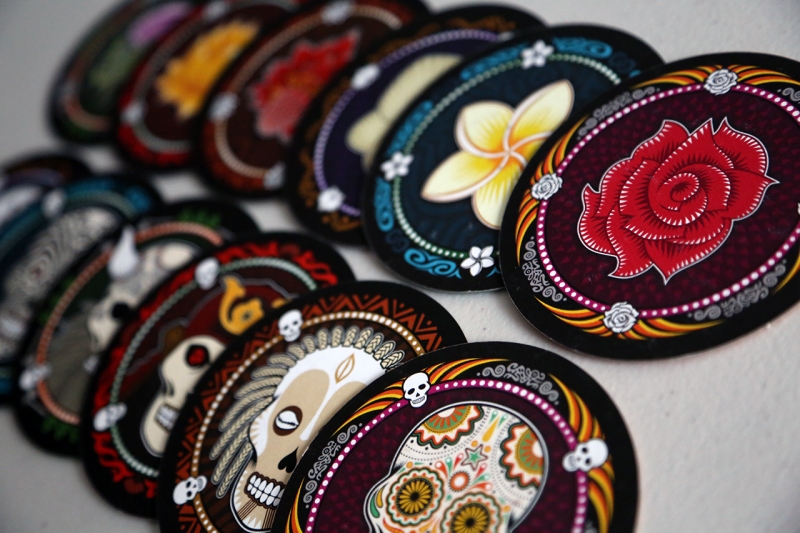 The version of Skull the League of Nonsensical Gamers has come to know boasts a tribal sort of look. The play-mats and discs are ornately designed on both sides, and each tribe has its own skull and flower, so switching up tribes between games is always neat.

The game comes with 24 discs and  6 play-mats, divided into tribes so that each player will have 4 discs and one mat. The components are constructed with heavy cardboard, adorned with brightly colored illustration. The flip-side of the card-playing mats even have metallic decoration!

The object of this game is to succeed in two challenges, or to outlast one’s opponents by being the last to lose all of their lives (discs).

Each player begins by choosing a tribe. That player then takes that tribe’s four discs and play-mat. The players place their play-mats skull side up – the skulls are in each corner of the play-mat. The flip side of the play-mat is the flower side and has metallic decoration with shiny little flowers in the corners. The players then hold their four discs in their hand, so that only they can see their flowers and skull. Once everyone’s got their tribe and their game faces on, decide on a first player and that’s it! Let the game begin! 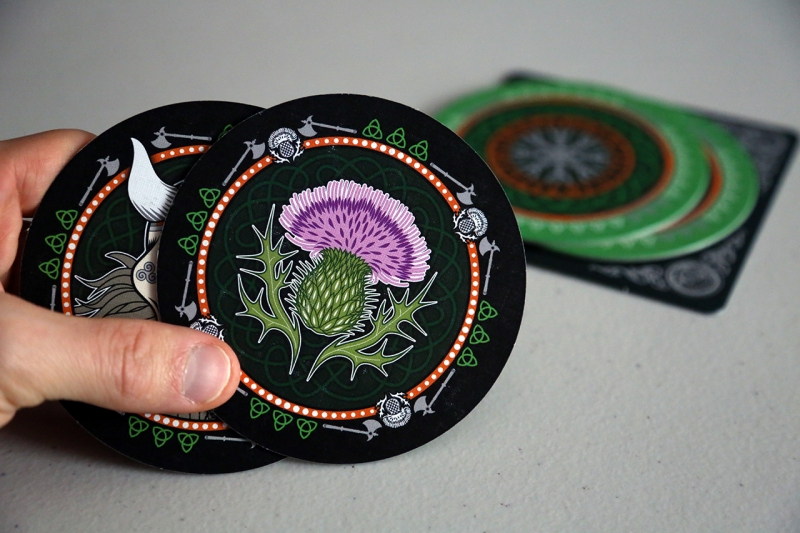 When a player proposes a challenge, they become the Challenger and what they are doing is betting how many flowers they can reveal without first exposing a skull. When a challenge has been proposed, no more players may place discs. Instead, the game becomes a betting game. At this point, each subsequent player can raise the bet or pass. Once a player has passed, they are out for that round. When all players have passed but one, that player must carry out their bet. 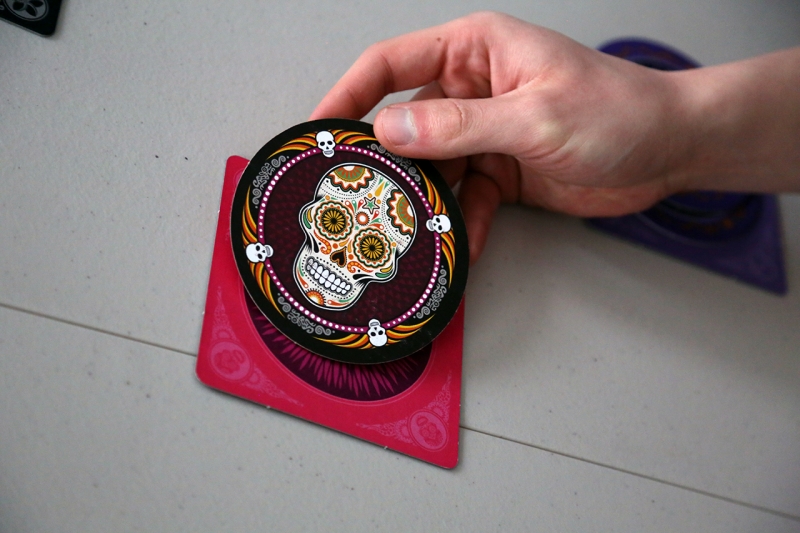 The tricky part about challenges is that the Challenger must always reveal their own disc(s) first. Once a player has revealed their own disc(s), they can then flip other players’ of their choosing. The rule to this, though, is that discs have to be flipped from the top of a pile first. The Challenger can go in any order around the table, flip all of a single opponent’s discs and none of another’s if they choose, etc, but the top disc must be revealed from any pile first.

The Challenger stops revealing discs when a skull is encountered or they have revealed their proposed number of flowers. If they have met their challenge, they succeed, and flip their play-mat to the flower side (shiny). Two successful challenges is a victory!

If they have not met their challenge, they lose a life. If a player fails a challenge by flipping their own skull (a player must be careful when placing a bet if they’ve played their own skull – it’s a shame to kill oneself), they randomly choose a disc to discard. If a player fails a challenge by flipping another’s skull, that player gets to choose randomly for them. The other players do not know which disc the player has lost. A player is eliminated when his or her lives have run out (all of their discs are gone). A caveat to that is if a player only has one disc remaining and it is revealed to be a skull, they are eliminated, as well. 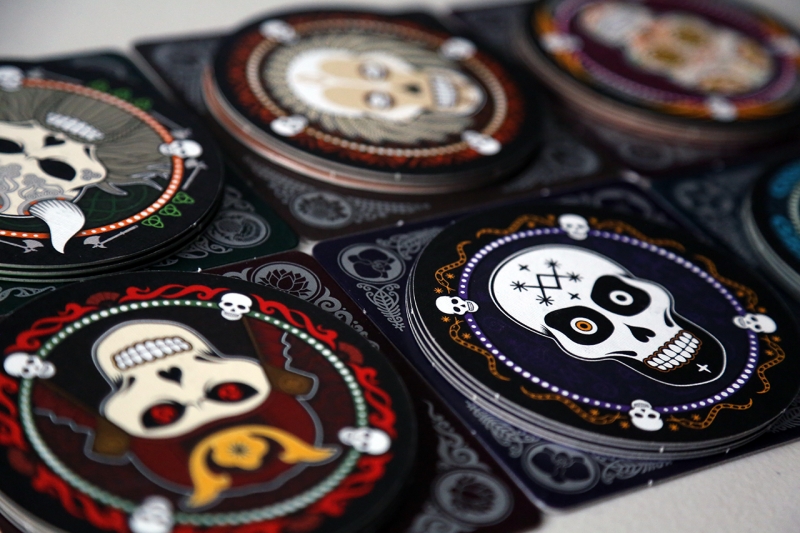 Skull has quickly become a group favorite. It goes quickly and it’s full of sneakiness and mischief. Each player can be caught holding their breath and leaning in closer as the Challenger reveals discs. There are slight smirks, noticed only briefly – is that player going to “skull” everyone or do they just want their opponents to think so? Players need to be able to read their friends, if they can call them friends after they steal their lives!

The game is easy to learn and it goes fast enough that even if one finds themselves being repeatedly duped by their friends, they won’t have to wait forever to play something else. Even if a player’s been eliminated, watching the manipulation is always entertaining, too. Feel free to bait opponents: “I’m totally gonna get you!” “Do you trust him? Do you think he wouldn’t skull you?” The fun of this game is in the deception.

I’m not the sneakiest of people, to be honest: I’m loud, I’m clumsy, and generally my poker face sucks all around. I wasn’t sure how I’d feel about this one, knowing that I’d have to be at least remotely deceptive. Plus, my social perception isn’t always the greatest. Needless to say, I was pleasantly surprised with how much I enjoyed this game. I’ve tried playing with a more restrained strategy and I’ve played with a more “who gives a damn” sort of strategy. I don’t always win, but it’s still fun when you’re flipping those discs. And there is nothing more satisfying than watching someone confidently flip your skull. This one is a quick learn with a simple concept. You can include a lot of people in it, both seasoned and novice gamers. It’s a good one to share with your light-gaming friends or people who like poker and gambling.

This game has immediately shot to the top of my buy list. This is a very simple game for everyone to learn but the real challenge lies in how well you can trust your fellow players. The first round I played ever, I won and thought wow this is going to be easy, I got them figured out, only to find by the end of the game that I lost all my flower cards and was forced to “Skull” myself. This is a great game for anyone who enjoys playing poker. This is all about bluffing. How many times will you fall for that one player who keeps giving you the skull every single round, Steebin? I think the other half of this game’s appeal is the design and quality of the game. You almost want to find a skull so you can see how awesome it looks!

I’m here to confirm Kelly B! is loud. Now, onto Skull—a  beautiful game where you try to outwit your opponents. Being competitive, Skull offered a nice change of pace. This is a game where I’m not really concerned with the result. And I don’t think anyone else is. That seems rare (especially considering my friends) and is definitely refreshing. The fun comes in seeing how each player is playing the game. Are they conservative or are they playing a little more reckless? Of course, once you think you’ve figured out their style and take a gamble, you flip their skull. This is one of my favorite fillers at the moment. It’s beautiful, unpredictable and, above all, entertaining.

Skull is a game that I picked up on a bit of a whim. While I would typically watch a tutorial and read some reviews, I just decided one day in the game store that I would buy it. I’m happy to say, it’s one of the best buys I’ve made in a while. As our group has grown, we run into more and more nights where there are 5+ players ready to throw down. Skull has fit seamlessly into the list of games that we pull out on those nights. It’s fast, easy to teach, and looks fantastic. Players can easily drop in-and-out as needed and, as the others have said, it has this strange ability to erase the competitive nature of the group. Hurt feelings, cries of “bullshit!,” and general competitive bitterness are all commonplace among The League, but not during Skull. When Skull hits the table, it’s nothing but fun. The stakes are so low, in terms of time investment and energy put into playing, that we don’t care who wins. It’s all about staring your mom in the face as you flip over her skull and watching her laugh at you – or confidently agreeing to flip over all six of the cards on the table, only to “skull” yourself immediately.