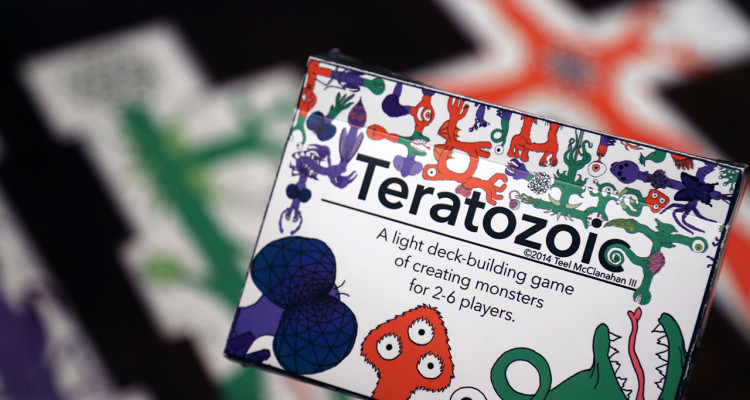 The human race, ever at odds with itself, has genetically engineered fearsome (and oddly fuzzy) monsters to be used as weapons in their wars. As such things generally happen, though, these creations ended up turning on their creators. Luckily, (for the monsters), they didn’t have to put forth much effort as the frightened humans soon resorted to global thermonuclear warfare. A single miscalculation resulted in the humans extinguishing themselves, leaving their own vicious genetic mutations to flourish. Behold… 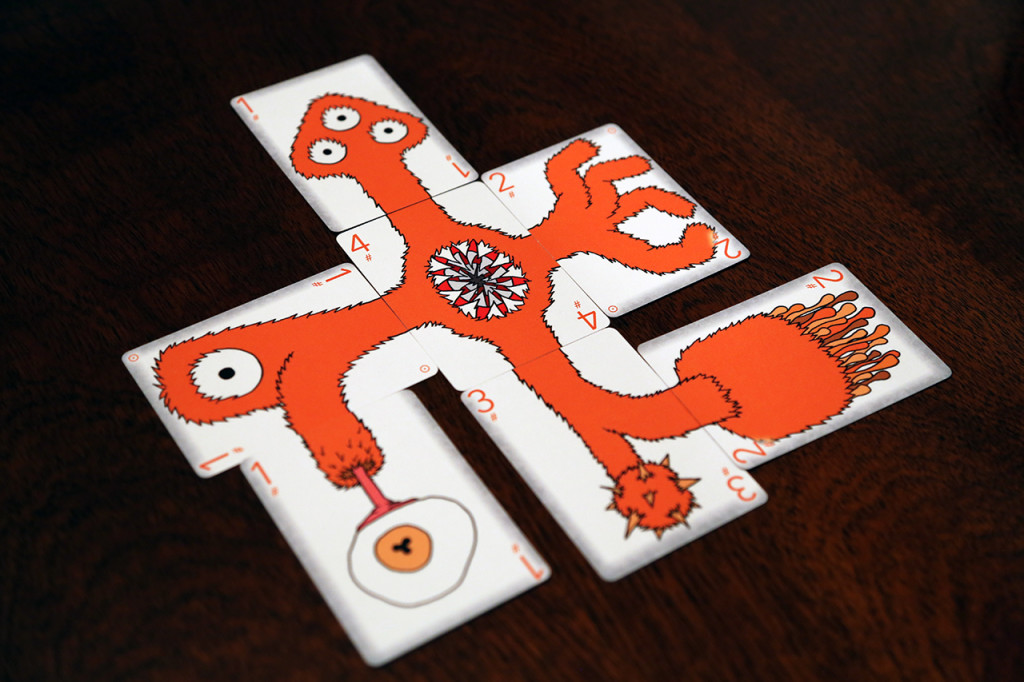 This is just one of the characters you can genetically assemble in Teratozoic (which translates to “Era of Monsters”), a deck-building card game by Teel McClanahan III and Modern Evil Press.

The art in the game is very simple, but effective. Clean line art and bold colors against a white background creates a great contrast allowing the monsters to pop off the card and provide the most obvious and only focus in an otherwise atmosphereless presentation. The art, as I’ve alluded to though, doesn’t fit the theme; the thematic synopsis would lead you to believe there are horrifying monsters running rampant so much so that they need to be nuked, but then you see a furry little orange monster more on par with a Fry Kid. These monsters make Mike Wazowski look terrifying.

While the art’s cartoony nature does not precisely portray a nuclear holocaust, the execution is nicely done. Each monster part matches up neatly with one another making it easy to visualize the fluffy, bug-eyed, tentacle monsters you create. If I had to nitpick one thing, I’d have made the borders that signify an end-piece more obvious. In this version, they are a very light gray. Something more prominent would be welcomed.

In this 2-6 player game, you will compete to build monsters over several eras, using your domination over the opposing creatures to add various and varied appendages to your gene pool. The primary objective is to build a deck that will, at first, be used in the creation of monsters whose point values will go head-to-head with your opponents’ creations. Winning these rounds will allow you to choose cards to add to your gene pool. At the end of the final era, the overall win goes to the player that is able to use the greatest number of mutation cards to form their monsters from their collected gene pool. 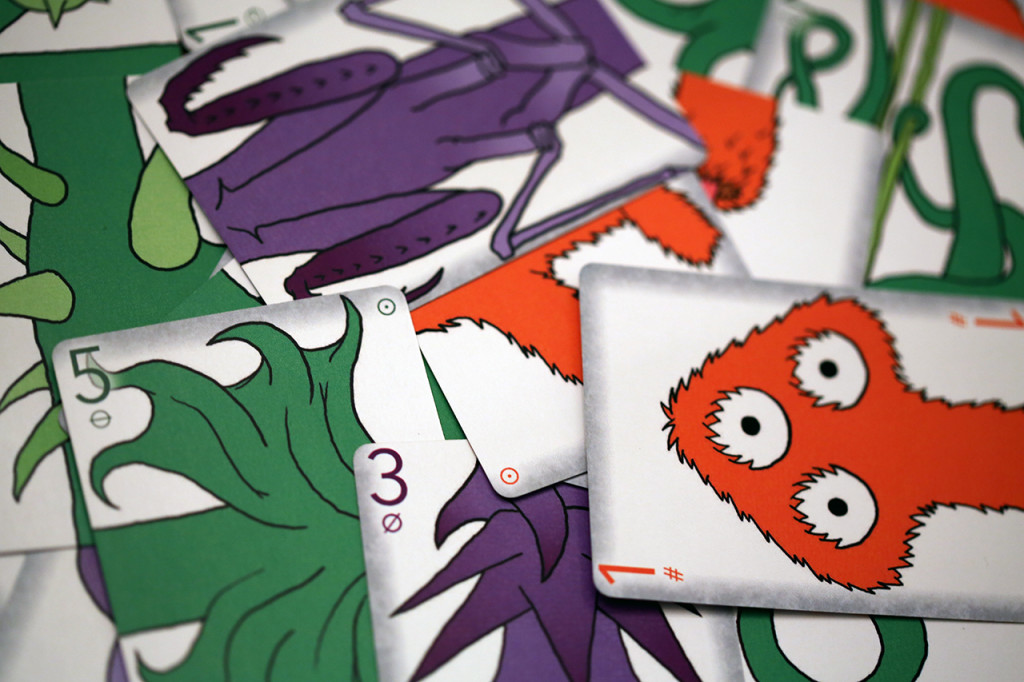 There are four phases throughout each round:

Play continues over multiple era’s with each era having new rules. Each era ends when the draw deck runs out. On the last Era you will then try to create the biggest, baddest monster you can with the cards you have won over the course of the game. Whoever creates the biggest monster using the most cards is declared the winner.

For a light card game, Teratozoic can drag on quite a while longer than you’d like. There’s excitement and amusement surrounding the first few rounds of monster-creation simply due to the strange odds and ends you can piece together, but it fades as the game goes on.

Strategically, it can be difficult to pinpoint what you’re actually wanting to achieve. Several (and in some cases many) of the rounds, you’ll find yourself having to play a low-value monster, or even just separate pieces, in order to preserve some of your better cards. You’ll have to find a balance between holding onto your higher-value cards for the deck-building portion of the game while collecting specific colors and parts for the end-game clincher. Of course, not being able to look at your gene pool to see what parts and colors you’ve obtained makes the final reveal all the more interesting. If things have been in your favor, you may be able to create a fairly impressive monster or set of monsters even. 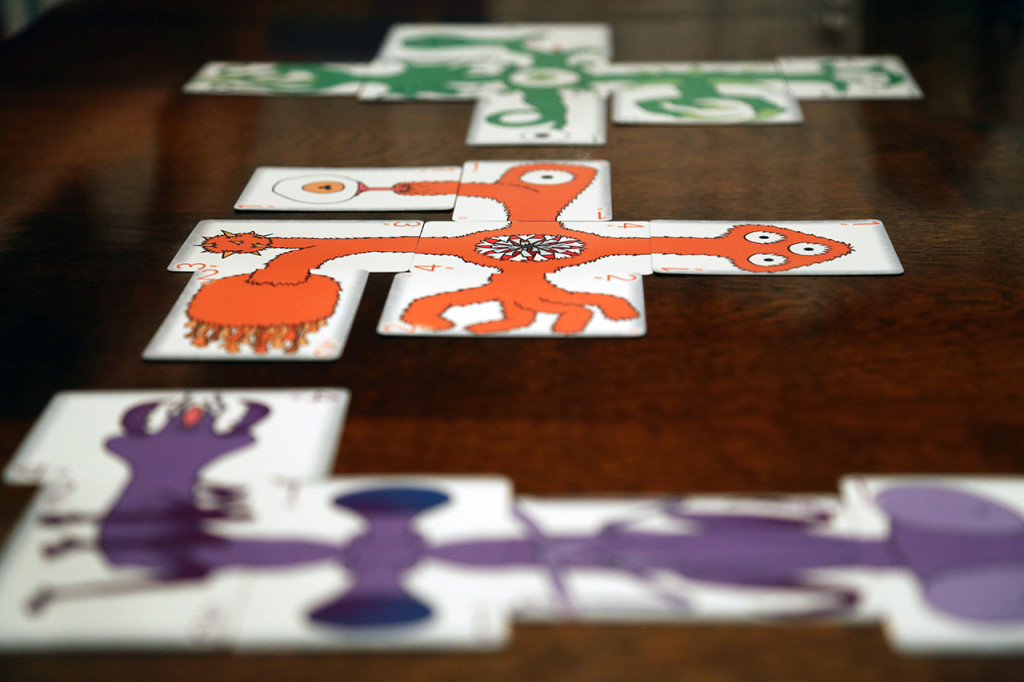 The game is simple in concept, but be prepared to do a lot of editing when teaching others, as the different eras, game phases, and terminology are all biologically accurate; too accurate though, to the point that we tossed aside the thematic jargon and spoke in simple terms. Doing so meant less time asking about the difference between expressed and recessive genes and more time building monsters. This is where Teratozoic shines; building monsters is easy and fun thanks to the clear card design.Scoring, however, is a different story. Bonuses and card effects clash to make quicks rounds drag as each player adds, then multiplies, then multiplies again. An excellent lesson in mental math for anyone, but it’s also just another time suck in a game that already eats too much time.

The concept of Teratozoic is interesting and definitely one that we wanted to play, but it struggles to find a true identity. As a filler game, it is too long and a bit too convoluted to have hit the table again and again. As a mid-level deck-building game, in the company of Dominion, Legendary, and others, it simply doesn’t have enough meat to stand out. We’d like to see the game find a niche and stick with it, rather than being pulled in so many directions that it loses focus. Short or long. Points or number of cards. Deck-builder or random draw hand-management game. These are the decision points that could help Teratozoic become something to remember.

Teratozoic missed the mark for me. The lengthy games became mundane about half-way through. Rather than being anxious to build the final, giant monster for the sake of it being a giant monster, I was anxious for the game to end. The big payoff at the end is interesting and exciting in theory, but Teratozoic has worn out its welcome by the time it comes around.

During the Era phase, you won’t always have the satisfaction of creating whole monsters. Being a quasi-completionist (oxymoron, anyone?), I was upset to find, on hands without many end pieces or too many 4-joint parts, the inability to make a full monster with all limbs intact. This is a game about building monsters, and I always felt like I was missing pieces to my glorious creations.

For a deck-building game, there feels to be precious little deckbuilding involved, given that the only way to gain additional cards come from winning rounds, and when a majority of the cards available in your hand come from the shared deck, you’re at the mercy of the random draw. In my opinion, there is simply not enough control available over your deck and the cards that you can play for a game that can last as long as this often will. I’m afraid that Teratozoic receives one thumb down, as I really have no enthusiasm for it.

As a gamer who often tries to see the positives of games and give them as many chances as possible, I found being a champion for Teratozoic exhausting. Monsters, even the cute-sey type, and deck-building seemed like a winning combination, but with a convoluted in-game vocabulary and a game length that runs 30-90 minutes (what!?), Teratozoic flies wide of the mark.

A four player game has you run through a 60+ card deck over 6 times, with some eras only depleting 8 cards in a single round. It’s little things like this that add up in a big way, as your “light-filler” turns into an hour and a half that ends with a fizzle. I say this because, though you compete for highest score for the entire length of the game, none of it matters at the end. Victory is based on highest total cards used in a single monster, not the point values of the cards. Yes, this mixes things up, adding strategy to winning hands and choosing how you build your deck after winning a round, but, I stress, it just makes things longer and more muddled. I enter with one expectation and get something entirely different.

Halfway through each game, I found myself tired, unenthused, and ready to move on. It’s kind of light in concept, the design is nice, and if you find players who dig it then there’s plenty of game to be found here. However, the combination of gaming genes found in Teratozoic made for a bit of a monster, and not the cute fuzzy type that I want to spend time with.

At first glance this game looked really fun due to the artwork. There was lots of giggling amongst the group after seeing some of the creations that were made. At first, I did not grasp the end game I was going for. I was just trying to create the best monster I could each round with what I was dealt and did not win very many cards. As the game went on I realized how long this game was going to take and was turned off by it. As the game progressed I started to watch the draw deck and hoping the round would end. I just wanted to get to the end game and build that epic creature. In the end there was little reward for all your hard work since you just needed to be able to create a creature with no loose ends with the most cards.

I think this game has a lot of potential but needs to be reworked as far as length and ultimate goal of the game. I really enjoyed the artwork and how all the pieces came together to create some insane looking creatures. If the game length was shortened and the end results more satisfying then this would be an instant game to add to my collection. As is, I am afraid the game would wear out its welcome pretty quickly.

The League of Nonsensical Gamers would like to thank Modern Evil Press for kindly providing us with a prototype of Teratozoic for this preview.

Teratozoic is currently funding over on Kickstarter. If this game piques your interests, head on over to the campaign page by Aug 16, 2014 to grab your own copy. For $20, you receive a copy of the game along with all reached stretch goals.