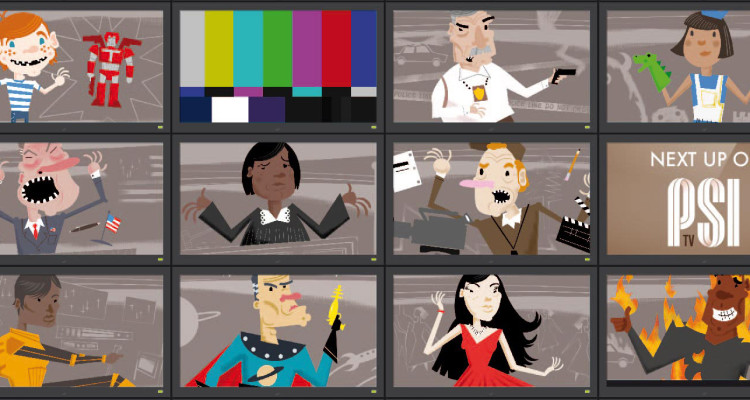 Tonight! On The Networks! At 8pm on a very special “So You Think You can Flail,” all of your favorite reality show stars will compete for the top prize! Then, at 9pm, TV star Gray Fox appears as Special Agent Dandruff on “Agents of S.H.A.M.P.O.O.” Followed by a very special episode of “Chainmail Bikini Warrior” where our hero is in dire straits to lose those extra winter pounds in time for Bikini season! This is can’t miss TV! Hurry and tune in before we cancel them next week!

The Networks, by Gil Hova, is a game for 1- 5 players that allows you to step into the shoes of a network TV executive. Your goal in the game? To turn your rinky dink public access station into a prime time network in just 5 seasons. To achieve this you will need to develop new TV shows, covering topics and genres that would make George Newman from UHF envious, as well as run advertising to cover the costs of signing the hottest new stars. Gaining the most viewers is the key to success, so casting popular actors to star in your shows will increase viewership. Of course, the hottest stars will demand a premium contract, so ad campaigns for products such as “Yeti Yachts” or “Perfect Ponchos” can hopefully bring in the bucks during these shows. 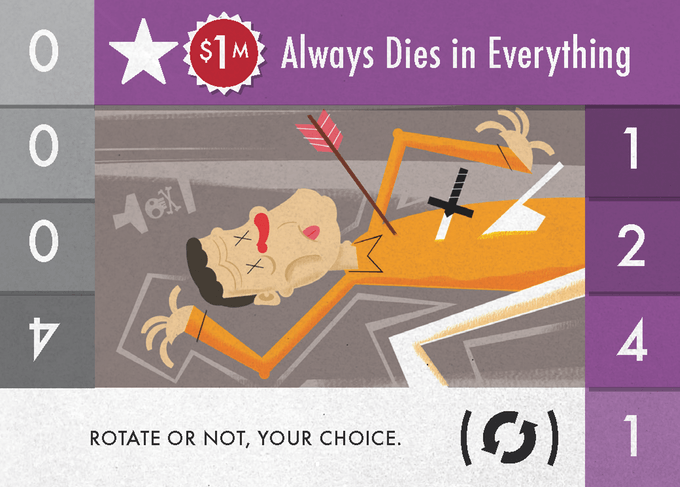 The main objective of The Networks is to earn the most points, represented as viewers. Each game round, or “season”, allows a player to choose from several different available actions,  such as developing shows, landing ads, signing stars or obtaining special Network cards to help bend the rules to gain an edge on your competitors.

Developing shows like “Monday Night Foosball” can earn you a substantial number of new viewers, but each show also has their own optimal time slots and will suffer in the first season unless scheduled properly. Some shows that you develop will have prerequisites, requiring you to have available stars and/or ads in your green room before you can add the show to your lineup. You can’t run “Dr. What” without “That Guy Who Always Dies” or viewership will be low and the show will face early cancellation.

To sign a star, you will need to spend an action and some hard earned money to place one of the available actors in your green room. Ads also require an action to land, but you take money instead of spending any, and will also begin gaining income once the ad campaign is attached to a show. Some shows have spaces for optional stars and/or ad campaigns, so these slots may be filled during a separate action by attaching an available card from your green room to a specific show in your lineup.

Another action available is to take a Network Card from those that are on offer. These cards add objectives for end game points or allow instant rewards in the form of viewers or income. There are additional cards available for advanced players that add even more ways to score viewers and income, as well (you can shuffle these in once you are more accustomed to the game). Also available are interactive cards that allow players to add an element of “take that” to an otherwise individual type of game play.

Players will take turns taking one of the available actions until all players have chosen to “drop and budget,” which is a fancy way of saying you have passed and are finished your actions for this season. Choosing to budget first will net you additional money, immediately, but may leave valuable cards on the table for the other players to pick over. After everyone has passed, players earn their income, if any, after balancing their budget between revenue from advertising and the costs associated with active shows and their actors, and then scores the viewers for each of their shows. The season marker will advance, shows will age and the player in last place will become the first player in the next round. Once the 5th season has been finished, the game will end after one additional full scoring, in addition to in any viewers added by end-game network cards. The player with most viewers will be crowned the next R.J. Fletcher. (If you haven’t seen UHF to get this joke, you should go watch it after reading this preview…) 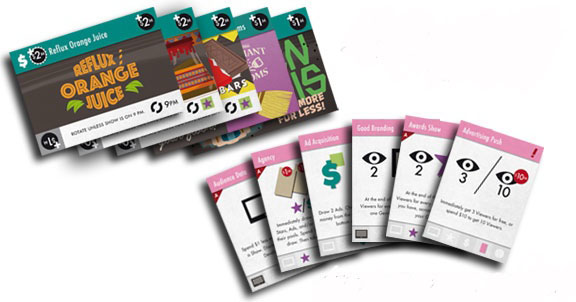 It Helps to Have a Theme!

As the game progresses, players have an opportunity to score bonus actions by having sets of three or five shows that match a particular genre in their network. As you develop new shows, you will cancel others from previous rounds and add them to your rerun time slot. Eventually, these reruns will go into your archives. If at any time you have three shows from a particular genres, you get to immediately take a bonus action. This will allow you to sign a free actor or land an ad and some extra income. Again, if you have five shows of one genre, you may take a one-time bonus to immediately develop a show for free and have the option to exchange some money for viewers.

Watch Alone or With a Friend

Slow night, or just you and a buddy on the couch? Fear not, for the game plays just as well at lower player-counts, with only a few adjustments to the layout. For a 2-player game, you will use a rondel mechanic to determine player order. An additional twist is that after the 3rd turn the game introduces the “burn” mechanic. At specific points during the season, a network card is drawn from the top of the deck. Symbols along the bottom of this card indicate which other cards need to be removed from play. This will force you to balance your actions accordingly or perhaps find that card you are aiming to snatch removed from the game.

For Solo play, the goal is to be able to gain 265 viewers or more by the end of the game. You will also use the burn mechanic in this mode, but you will need to perform a burn after each and every action. This really gets tough at times as you may be working towards developing a specific show, only to have it snatched out from underneath you by an unlucky draw. If at any time you can’t perform a burn action, a marker is placed on the player order track. When you place the 5th marker, the game immediately ends.

Why You Should Be Tuning In

It was a no-brainer for me to become a backer for The Networks after my first play. The game offers familiar mechanics, but does it in such a new and unique way that will keep players coming back for more. The key to the game is managing the timing of when to cancel aging shows and develop new ones.

The game also has a great sense of humor when it comes to the hilarious names of the shows that become available over the course of the seasons. I believe this little bit of cleverness supports the theme perfectly, or I could see this game being pretty dry otherwise. I can only imagine what zany options may come in future expansions.

After some initial concerns of balancing and testing different strategies, we all seem to be on the same channel that this is a very solid game. The Networks fits right in at a mid-weight game that is easy to teach and easy to play. The gameplay itself is pretty intuitive after you get a couple of actions under your belt. The goal is very clear and you never feel like you are completely failing at your strategy, thus all of our plays have been very tight in final scoring. This is also the case in solo play; the goal to reach 265 viewers seems impossible after the first few actions, but you can find yourself gaining ground as the game progresses. While I am not much of a solo gamer I can see myself trying this game multiple times as I have yet to hit that magical score.

The prototype we received closely represents the final product, with the main aspect missing being the completed artwork. As it is, our imagination was enough to easily play off of the card titles alone! When playing with my wife in the 2 player game she was a little sad that the cartoons were not on the cards. I cannot wait to play again when my backer reward arrives in the mail.

The Networks, on first impression, has proved to be a welcome mix of hand-management and light drafting that requires a nice amount of tactical planning. While heavier than expected, the game still remains approachable for those less experienced. This is all coupled with a unique theme and goofy sense of humor that helps set the game off for fans of TV tropes and weak, but hilarious, puns. I look forward to spending more time exploring what this game has to offer and consider it a fresh take in an ever-crowded game market.

As a fan of fresh and quirky games, The Networks was a welcome addition to my evening’s medium-weight lineup. The card-play mechanics are smooth and easily understood however, tucked underneath the hilariously named TV shows lie a number of decisions that will provide tension like an episode of 24 (yet more realistic). When should I cancel “Cooking with Milk?” Should I really invest my networks hard earned cash in the “Guy Who Dies in the First Season” or the “Washed Up Sci-Fi Actor?” Like an episode of Game of Thrones, this game is addicting and leaves you wondering how the last 60 minutes flew by so quickly. The Networks is must-see-TV and I highly recommend you check it out.

For more of my thoughts, be sure to check out the Sept. 3rd Boardcast News edition of The Podcast of Nonsensical Gamers.

The League of Nonsensical Gamers would like to thank Gil Hova for kindly providing us with a prototype of The Networks for this preview.

The Networks is currently funding over on Kickstarter, and already plowing through stretch goals. Channel surf on over to the campaign page by Sept. 30, 2015 to purchase your own copy. For $35 you will receive a full copy of the game and any stretch goals that have been reached.