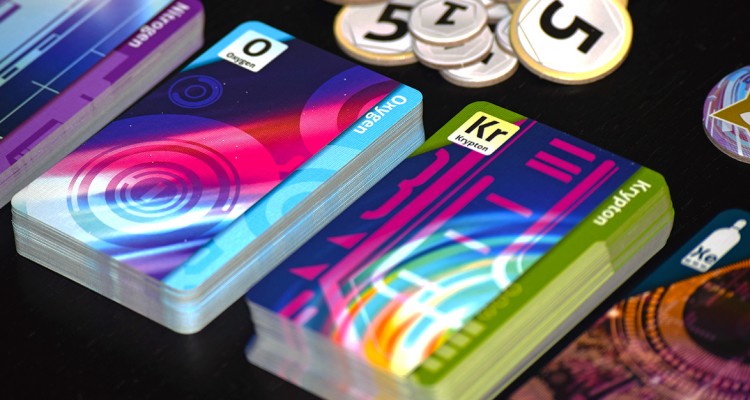 Business is booming and that business is Xenon! That’s right, your job is to distill xenon from plain, old air so that you can market it for use in the latest and greatest of research and development! Unfortunately for you, this is a free capitalist market, and there are others pumping out the xenon against you. It’s a race against your competitors to be the biggest, most efficient supplier around – so get to it!

Xenon Profiteer is a deck-building and hand management game from T.C. Petty, III, with clean, efficient, and lovely art by Daniel Solis. While typical deck-building games promote the addition of cards to your deck, Xenon Profiteer takes the mechanic a step in the other direction and makes it not only possible, but absolutely essential to cull the deck that you’ve built, building the distillation theme all the way into its main mechanic. 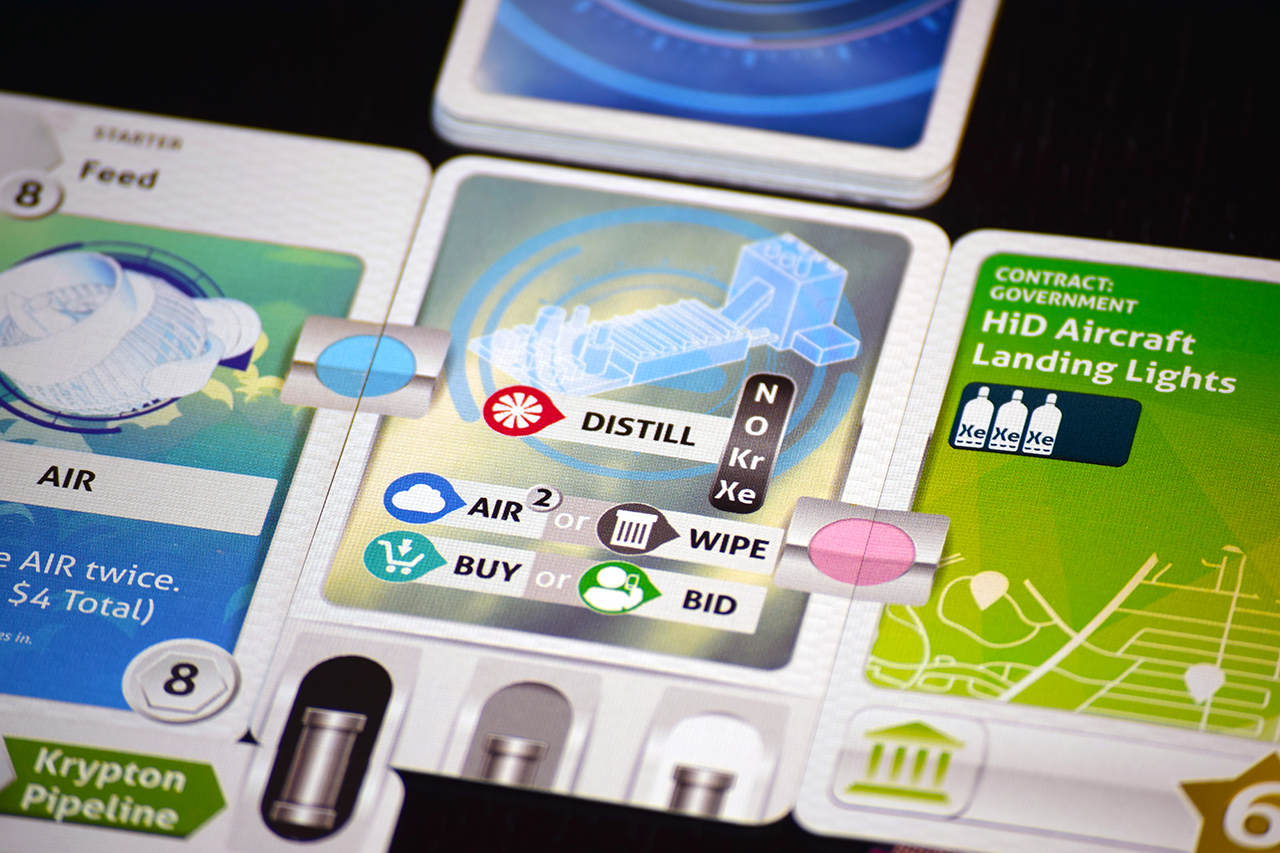 Gameplay in Xenon Profiteer is far from rocket science – each turn follows a simple structure in which you distill the air in your hand (discard element cards in order of rank), take air into your system (add element cards to your deck) and attempt to upgrade your console. In the removal of cards from your hand each turn, Xenon Profiteer embraces the hand management mechanic, pushing you to collect sets of low ranking element cards so as to be more efficient during the distill action. Taking in air is the only way to add more xenon to your deck, although you are forced to also add other element cards.  A perk of taking air is that it gives you money that you can spend on upgrades. Alternatively, if you really don’t want any more air, you can opt to wipe the available contract or upgrade cards and replace them.

Purchasing upgrades is key to boosting your efficiency and working your way toward contract completion. Using your money (from your initial stake, taking air, completing contracts, and other card benefits) you can buy console upgrades that will help you streamline your distillation process. These upgrades include cards which allow you to do things like earn money for distilling certain elements, take an extra xenon into your hand, or complete contracts for one fewer xenon. These upgrades can be installed into your console for an ongoing benefit (at a higher cost) or kept in your system for use when you draw them. Keep in mind that installing your fifth upgrade is one of the game-end triggers, so you may want to be careful with what you decided to hold on to. If you’re not in a position to purchase, you have the alternative option to bid on a contract or upgrade by placing one of your tokens on it. Each of your tokens reduces the cost of a card by $1 if you purchase it, or causes another player to pay you $1 if they snag it.

Winning the game depends on collecting points, and the best way to do so is through completing contracts. When xenon is the only element card left in your hand, you’ve successfully distilled it and can set it aside. When you’ve set aside enough xenon to match the requirements of your current contract, that contract is immediately completed and you gain its benefit (money and endgame points). You may only work on one contract at a time – buyers want to know that you’re focused on them – but you may sign onto another one on the same turn that you complete an active contract. Upon completion of your fifth contract, the end of the game is triggered (an alternative to triggering via upgrades). 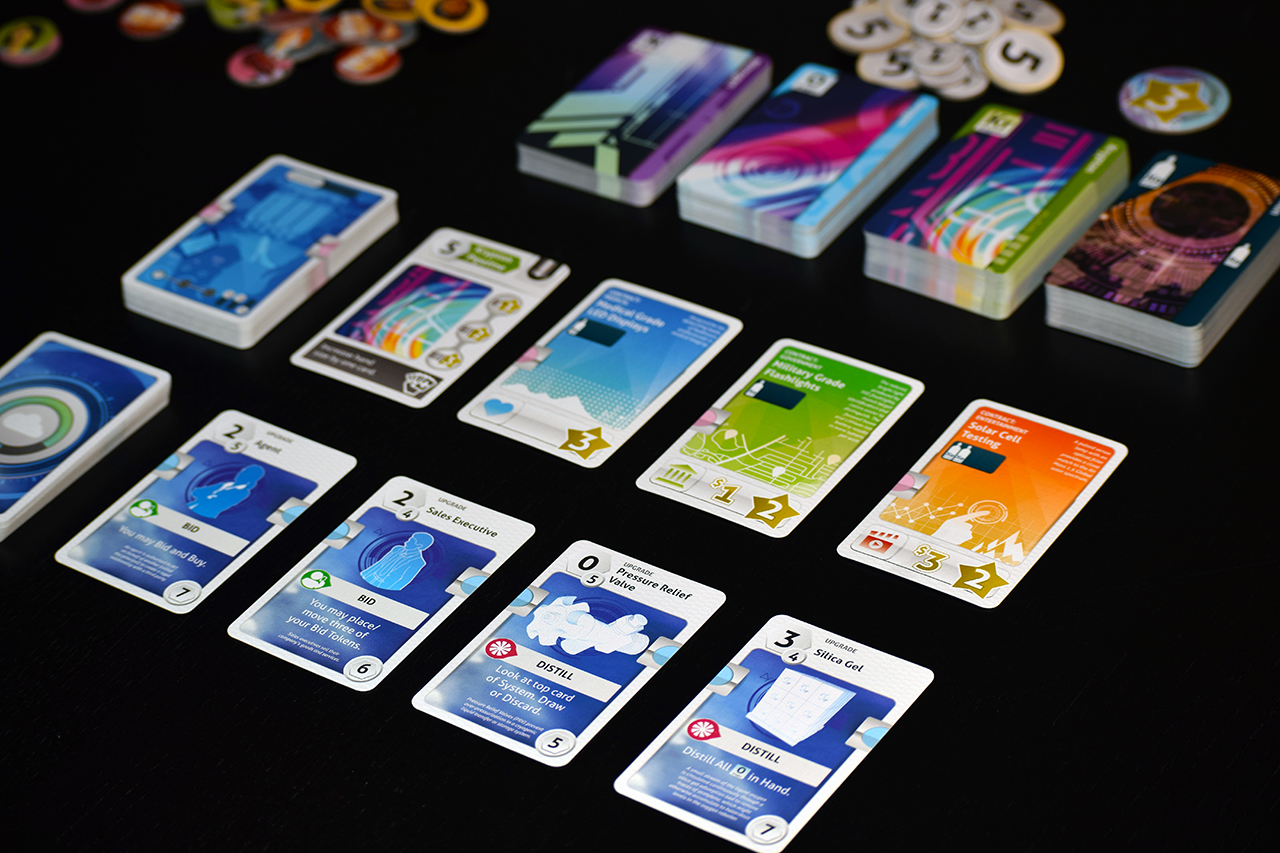 Xenon Profiteer provides a great twist on traditional deck-building in a simple, easy-to-learn package. Gameplay moves quickly and is very much enjoyable by two to four players (be aware that the five players listed on the box is not really correct and although T.C. has provided us with a way to play with five people, you really should just not). The simple turn structure is augmented by your ability to go into “overtime” for extra distillation, and also through the use of purchased upgrades and pipelines. You can step your experience up another notch with the expansion, which includes roles that you may take on for special starting bonuses or one-time abilities. The game offers great replayability for a variety of gaming levels.

Notably, the departure from traditional deck-building by forcing you to install cards from your deck to expand your console, and to distill element cards in order to collect xenon for contract completion is an excellent new turn of events. As the game progresses and you and your opponents have streamlined your deck, gameplay gets tighter and disparities between the upgrade strategy and the contract selection choices you and your opponents have made can be seen. Knowing the upgrades and contracts that are available can give advantages over new players, but not so much that it makes it an unfair game – upgrade purchase is still dependent on when cards are available and who had the money to get them.

Overall, I’ve very much enjoyed Xenon Profiteer and would definitely recommend it to anyone looking to try their hand at deck-building and hand management! 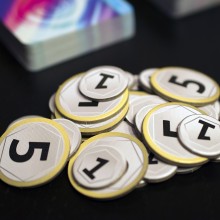 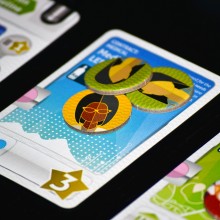 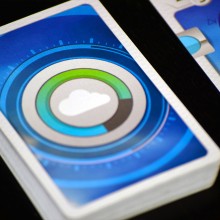 I originally backed Xenon Profiteer on a complete whim and to support T.C. Petty III, a great indie mind in the hobby. Upon receiving it, I was happy with the production quality, but still had no idea what to expect. I was completely taken off guard in the best way after my first play. The consistent culling of elemental clutter keeps you engaged and participating each turn – you’re always doing something and moving toward a more efficient system. The careful balance between bidding and buying, and the cost/benefit analysis of installing a component versus using it as a one-off creates easy but meaningful decisions that I find satisfying to parse through. It also plays well across the 2-4 player counts with more players meaning more scarcity in contracts and upgrades, but a much more interactive play of the bidding mechanism. The only weak part I can find is the potential lack of variability. You’ll easily cycle through the upgrade and contract piles in a three or four player game and knowing what could come out can be a big leg up over newer players. Once everyone is on equal footing though, it’s exciting to have perfect knowledge of the card pool and begin jockeying for valuable system components and lucrative contracts. For any fan of thinky card games or someone looking for a truly unmatched take on deck-building, Xenon Profiteer is definitely the game to turn to.

Xenon Profiteer offers a great deck-building experience that will have you racing to the finish line and enjoying the beautiful scenery along the way. However, how long that journey will last is… up in the air. I am a casual fan of the deck-building genre with the majority of my experience coming from Trains, a game I really like to play. Xenon Profiteer flew under my Kickstarter radar and I am sad that I missed out on it (what else is new?). My first experience was a two-player game with Matt and I was absolutely in love with the theme and design from the start. The main mechanic of ridding your hand of the “junk” elements to obtain xenon is a very ingenious yet simple mechanic that fits the theme of distilling air perfectly. The choices to be made on your turn are always interesting and strategic. Will you purchase a valuable upgrade for your factory, grab a lucrative government contract or just screw your opponents by wiping the available cards? The added bidding mechanic is nice and can help you reserve cards for future rounds, but didn’t come into play too often during my plays. I am a little concerned, as Matt has mentioned in his ruling, that in every game you pretty much see all of the cards since the decks cycle pretty quickly. I think this can possibly knock the replay value down a peg or two, since it is essentially the same options each game. As of now, I would be open to future plays but I am not sure how long that will be the case.