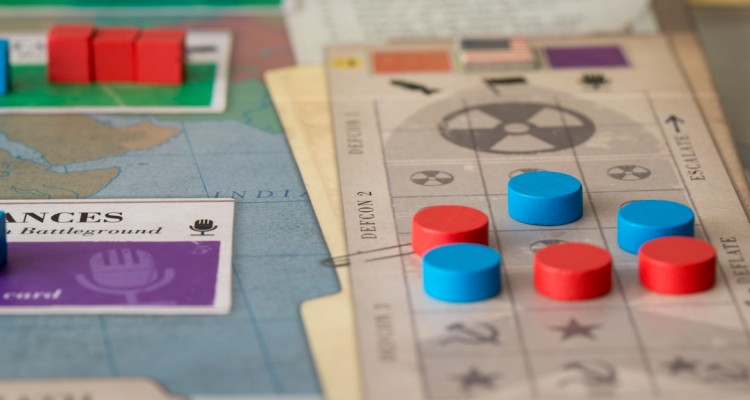 While I would typically write a witty or overly thematic introduction, I find the gravity of The Cuban Missile Crisis to somewhat speak for itself when truly analyzed. In 1962, long before my parents had met, before I was even a thought, there was a fairly significant chance that my current reality would have been wiped from existence. In October of 1962, humans sat closer to potential extinction than ever before, and the results of the world’s most notorious staring contest rested in the hands of two very egotistical politicians. It’s the magnitude of this situation that 13 Days: The Cuban Missile Crisis, 1962 looks to capture, through a two-player asymmetric area-control game.

The game sets you down at the helm of either the United States, under John F. Kennedy, or the USSR, under Nikita Khrushchev, on the 14th of October. Both factions are looking to make it through the crisis, here simulated by three rounds of play, with the most prestige. Prestige is gained by scoring Agenda cards, which each focus on one of the three “battlegrounds” of the crisis – Political, Military, or World Opinion. These Agendas are secretly chosen from a hand of three that you draw at the beginning of round, and each player must mark on the game board their three potential battlegrounds, allowing the opponent to narrow down your potential target, without knowing exactly which one you’ll be aiming for.

The course of play continues into a back-and-forth turn order with players utilizing Strategy Cards, a hand of five cards dealt each round, that allow you to impact the battlegrounds. Cards are either affiliated with the US, USSR, or the UN, and give two options – a “command” option or a special ability, referred to as an ‘event’. 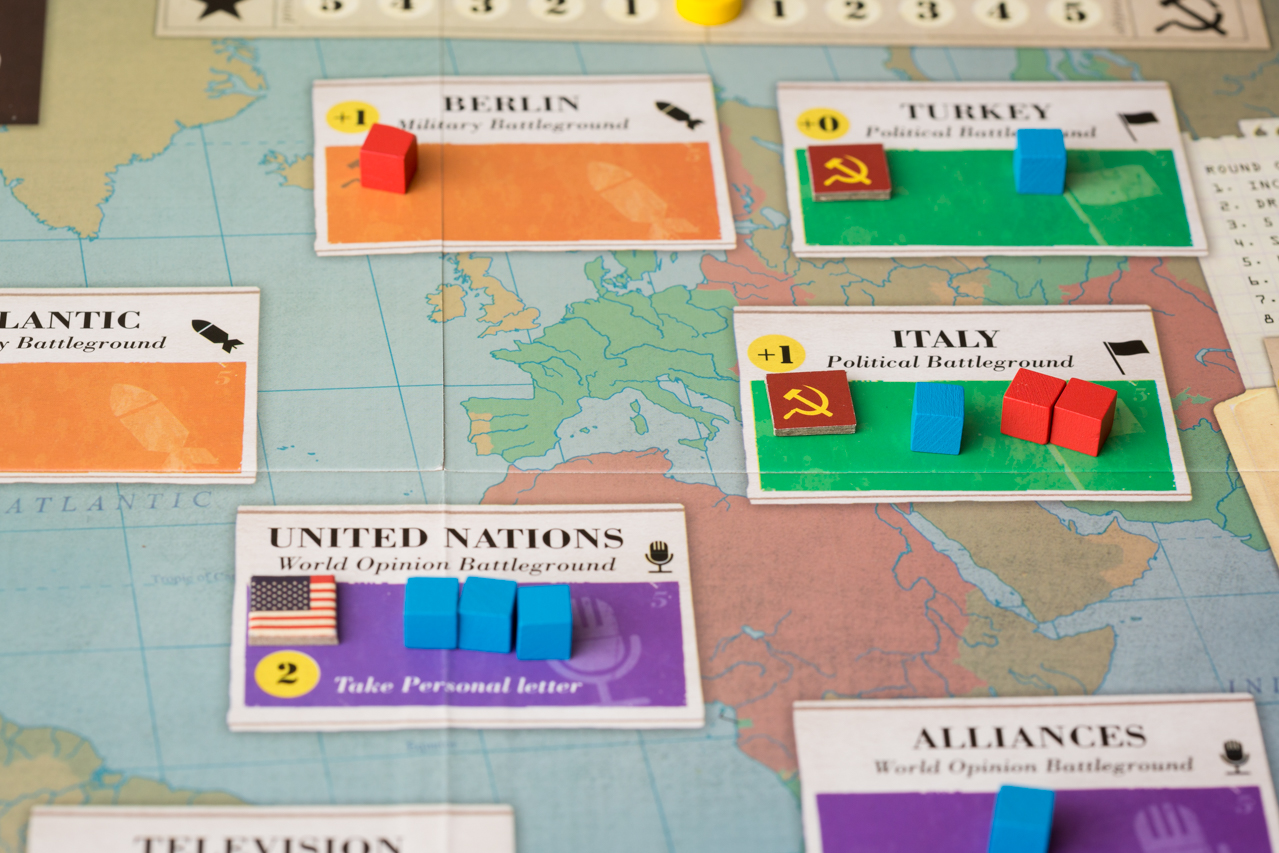 The command option is used to place or remove control cubes from the board, with cards ranging in value from 1 to 3. Controlling areas is the main way to score agendas, and typically the degree to which you dominate your opponent impacts the amount of prestige gained. It also impacts the DEFCON tracks – a set of three sliding scales that tie to the three types of battlegrounds. Placing cubes, simulating the maneuvering of your nation in that area, causes the associated DEFCON track to increase and pushes you closer to nuclear war. Removing cubes causes the DEFCON track to decrease, simulating an easing of the tension and a reduction in threat.

Any card may be played for the command value, but whenever you or your opponent uses the command points from a card of the opposing faction, they must first allow that opponent the option of using the event text. If the Soviet player were to use the “Public Protests” card (a US card with three command cubes), for example, they must first allow you to trigger the event (“Remove any number of US Influence cubes from any one battleground”) before they may use any of the command points. It’s therefore important to weigh the potential impact of each card in-hand, because many times it could have a positive effect for your opponent as well.

As mentioned, instead of playing a card for the Command option, you may choose to use the Event text. These special abilities are typically more powerful and can provide a greater swing in momentum, but are often costly in terms of the DEFCON track or the opportunity cost of the unused command points. You may play a card of your own faction, or from the ‘neutral’ UN for the Event, but never a card from the opposing faction.

After four cards have been played, the fifth and final card of each hand is set aside into the communal “Aftermath” pile, where the player with the most command cubes of their color will gain an end-game bonus of 2 Prestige. If they make it that far, that is, because each round ends with a “Check for Nuclear War.” If any player has progressed to DEFCON 1 on any single track, or DEFCON 2 in all three tracks, that player has authorized the use of nuclear force and loses the game. In this way, 13 Days represents the efforts to remain peaceful, while still in control of the global theater. 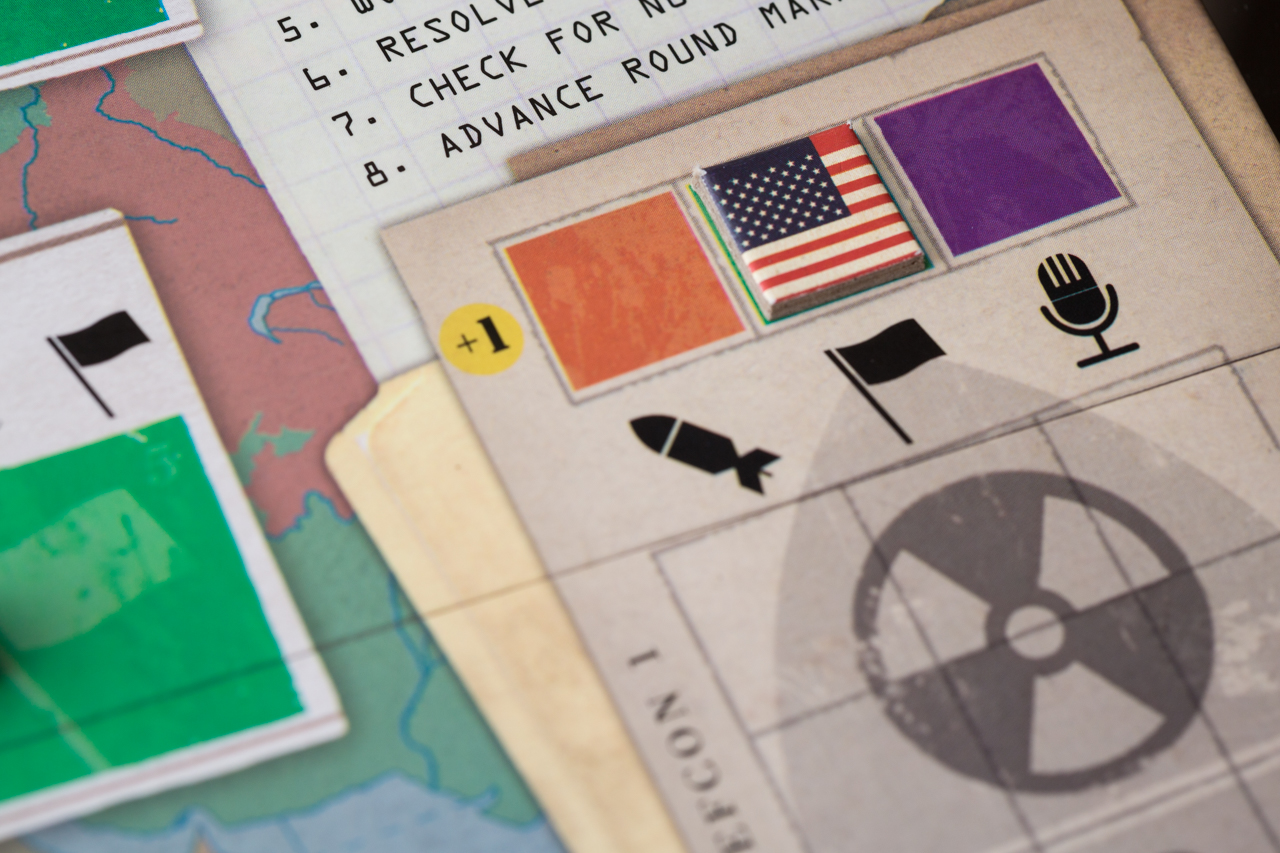 Smile and Wave – Keep Your Cool

13 Days garnered praise and Kickstarter success in part due to its adherence to historical events and engaging gameplay, much like its spiritual cousin Twilight Struggle. It is a game that appears simplistic on its surface, both thematically and mechanically, but offers a weight and depth that can have a great impact on a mindful player.

13 Days is a game that has very much won me over.

Regarding game play, 13 Days cuts a wide swath through the potential playerbase, appealing to fans of 2-player games, advanced fillers, area-control, hand management and semi-cooperative elements. It fills all of these roles deftly, making for a multi-faceted title that can offer a lot to those who seek out its different offerings.

It manages to utilize a randomized card deck with grace, forcing the player to often maneuver through un-ideal hands rife with options for the opposing player. While it initially seems problematic, it somehow manages to even itself out across the three rounds, posing a similar level of challenge and decision-making to each player. Never have I encountered a game where a player coasted through each round, even with a hand of great cards. This is because every move you make keeps your eyes on the DEFCON track. Making progress toward your Agenda is slow and deliberate, as you navigate the potential for war – and loss – with each card.

Trying to navigate through the DEFCON tracks is where I hit a small quarantine of my own (it’s not a blockade, those start wars), however. Every game of 13 Days that I have played has ended in Nuclear War. Whether through a missed play or a last-minute robbery of the Television World Opinion Bonus (allowing a player to increase/decrease a DEFCON marker by 1 before checking for war), I have never made it through the game without shots being fired. While I want to analyze this as an issue, I have come to an explanation that I think speaks to the design as a whole – nuclear war must be handled delicately. If you translate our failures at peace into the theme, consider where we would be if our world leaders had not been patient. Had they gone one step too far when the U-2 was shot down over Cuba or when Fidel Castro petitioned the Soviets to strike first, before it was too late. Our real world would’ve ended in war just as easily as this game. So, while some may say this interpretation is misguided, I’m crediting this game for successfully simulating the tension and the reservation with which the situation needed to be handled. 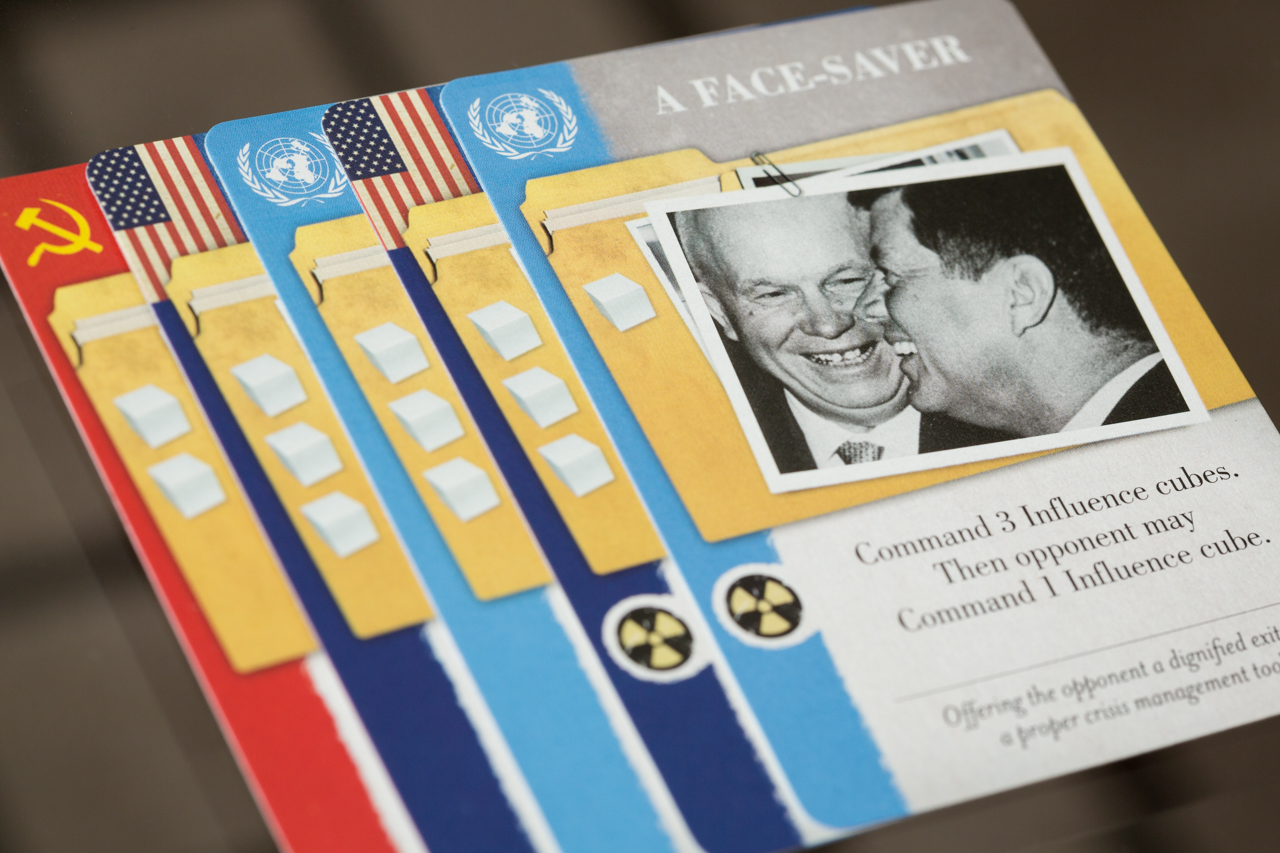 It’s dedication to the theme should also be commended because of the card text, titles, historical photos, and included “Brief History” companion booklet that all work to actually teach you more about the Cuban Missile Crisis than you likely knew. I love playing cards like “On the Brink,” or “Air Strike” and being able to learn where its ability and significance were drawn from. I also love how the cards are tailored, to some extent, to their impact in the real world. The “Fidel Castro” card increases the Soviet control of Cuba, the “U-2 Photographs card” commands US influence in military battlegrounds, and the “Operation Mongoose” card gives the US Prestige, but allows the USSR to react by altering a US DEFCON track. It’s all makes sense and is handled so well.

13 Days is a game that has very much won me over. In 45 minutes, I can engage in a tense battle, directly against my opponent, and navigate a whole array of interesting and informative card combinations. Each game tells a story of how October 1962 could have played out and does so in a way that feels authentic. I’m just glad it didn’t go how all of my games have. 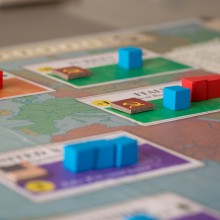 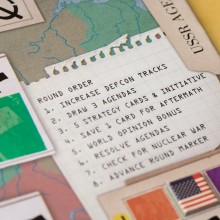 There have been some really good two-player games that have been released recently, and a good bit of them can jam-pack a lot of game into a small box. By offering a mental (and physical?) tug-of-(cold)war through card play and area control, 13 Days is definitely one of those games. Finding balance between your chosen agenda at the beginning of the round, and then how to achieve that goal with the hand you’re dealt is one of the most delicate balancing acts in a game. You will find yourself just staring at your cards because all of them seem good and bad at the same time. You don’t want to get too greedy and throw all your cubes in Cuba to complete your agenda, because you may inadvertently go to DEFCON 1 and blow it all up. Or you may not want to play one of the cards in your faction because you want to hold onto it to place in the aftermath pile. There are a ton of decisions each round. By round two, you will be on edge because nuclear war is always looming. So far, all of my plays had ended in “oops we blow’d up” which is fine/funny, but it also feels like we are playing something wrong. I guess that is just the lesson learned when playing with nuclear warheads.

I think this is a really nice two-player strategy game! It is appropriately paced and fits into my ideal game length – about 30-45 minutes – while still providing a good challenge to make it worthwhile. Each turn you take, you have to decide whether you want to play for command or utilize a card ability. And with that, you have the added decision if you’re playing your opponent’s card – then you’re giving them an ability against you! All the while, you have to assess how that is going to affect your positions on the DEFCON tracks. There’s a lot of pressure and the decisions you make can end up messing with your available maneuvers from round to round, in addition to putting you at risk to blow up the world. Similarly to Steve, I have managed to repeatedly blow up the world while playing this game. There were instances in which I truly just forgot the rules and that was my bad. There were also instances in which my DEFCON tracks got away from me or I was denied an ability that would have allowed me to cover my butt and take them down a notch before I bumped them back up. Coming out on top of nuclear stalemate is really hard work, which I imagine has to be a pretty accurate reflection of real life. For such a simple game, it really is a toughie. I highly recommend it for those of you who get into the two-player strategy gaming.

First Impression: When this game was first introduced to me, I labeled it as ‘Twilight Struggle, Lite’, and the initial playthrough did little to disabuse me of this notion. Could they not have reworked the card-playing mechanics somehow? There is a very tricky balance that needs to be kept in mind as I (the Russians) was absolutely stomping on things until Matt pulled the rug out from underneath me with the sudden control of the airwaves. (I’m pretty sure that was completely accidental, too!) Still, it is an enjoyable, bite-sized strategy game, and I’m itching to have a rematch at some point.