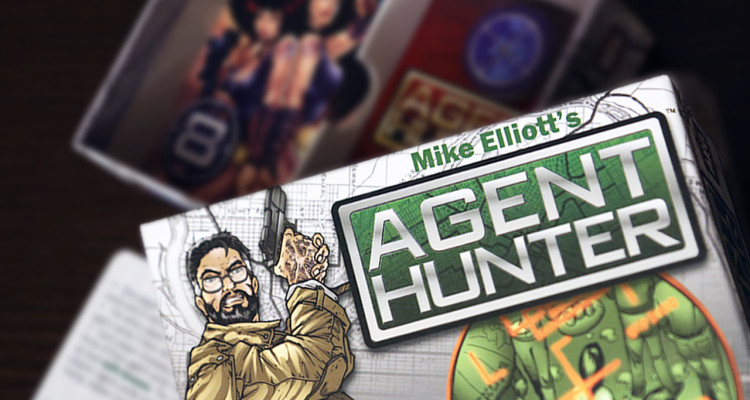 In Agent Hunter, you will use your crew of Bond-esque characters to eliminate an opposing group of super spies. Your lackies have different abilities, though, so taking out certain enemy agents isn’t always possible with those you have on hand. Be sure to manage your team well and strike first, before the location of your safehouse is discovered. 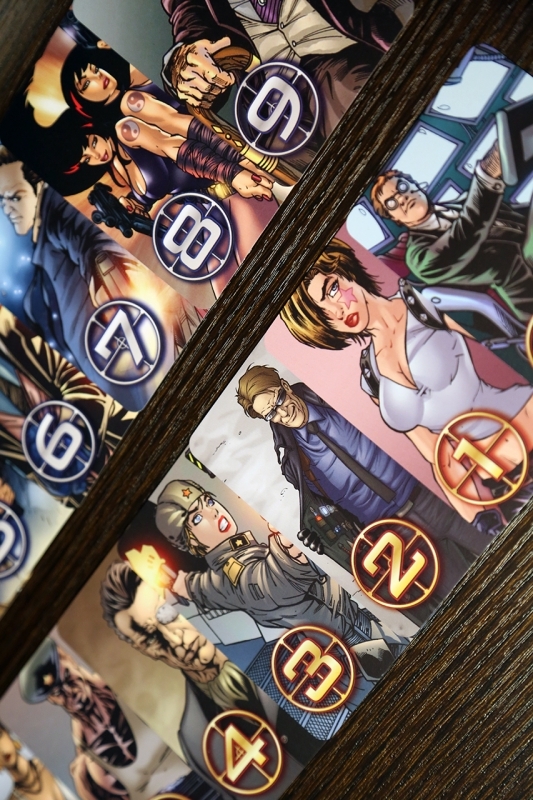 There are only 20 cards—10 red, 10 blue—and 10 tokens used during a game. The cards are made of a nice weight cardstock and the tokens of a quality cardboard. They are presented in a small box that is easily portable. The box has a divider inlay, so half of the box can fit the red cards and the other half the blue cards. If you plan to sleeve the cards the fit becomes a little tight, but it is possible. The other option is to remove the inlay and store the components loosely in the box, but dividers make things so organized and lovely. The rules are very simple and easily summed up on 2 reference cards; however, after a round, there is little need for them.

The espionage themed art is rendered in a slick, colorful, comic style. Each of the 20 cards has different art, so there are no duplicates between the teams (blue & red). This is neat and works both for and against you. Since it is a game that involves memorization, having different art (rather than duplicate sets) makes it a little more difficult to remember the cards. However, it’s only 10 numbers, so it shouldn’t be too taxing to remember the cards your opponent has presented to you. I found after a few playthroughs, I was only paying attention to the number in the lower corner and, unfortunately, not giving the art the attention it deserved. 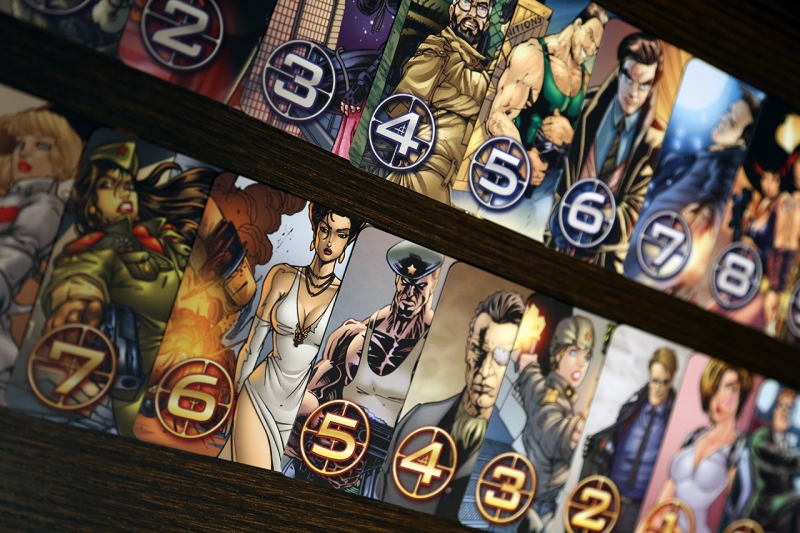 Another thing I’d like to point out is the art appears to be rendered by both artists and two slightly different styles are mixed between the sets. It would have been nice to have more consistency throughout the artwork. Perhaps one artist completed the art for one whole set while another did the other. 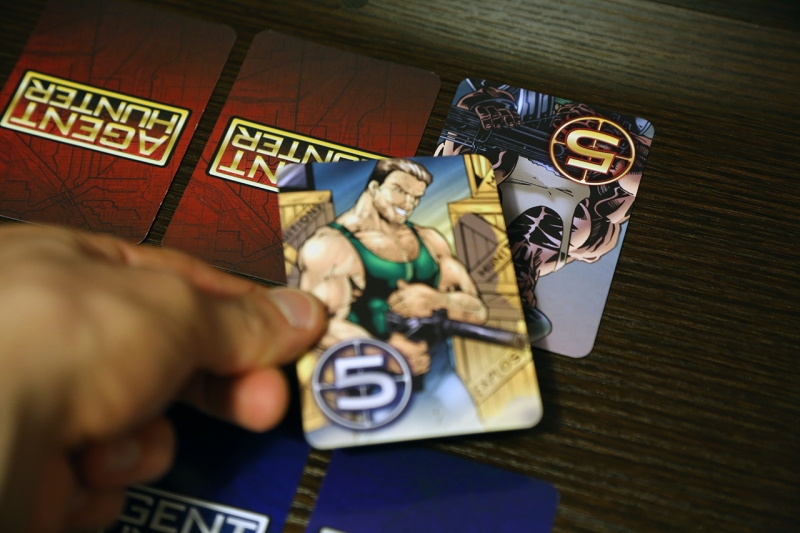 Each player has a set of 10 agent cards (either, red or blue), numbered 0–9, and 5 decoy tokens. The game begins with each player choosing 3 of their 10 agent cards to place face down in their “safe houses.” On each turn you will perform 1 of 3 actions:

If you feel your opponent is nearing the identity of one of your agents, you have the ability to switch agents on your turn. To do so, you reveal the agent from that safehouse, then return it to your hand and replace it with another (or the same…) card. It is a game of deception, so why not play mind games? There is one caveat, though. After switching an agent you will place a decoy token next to any one of your safe houses, netting your opponent an additional victory point at the end of the round. 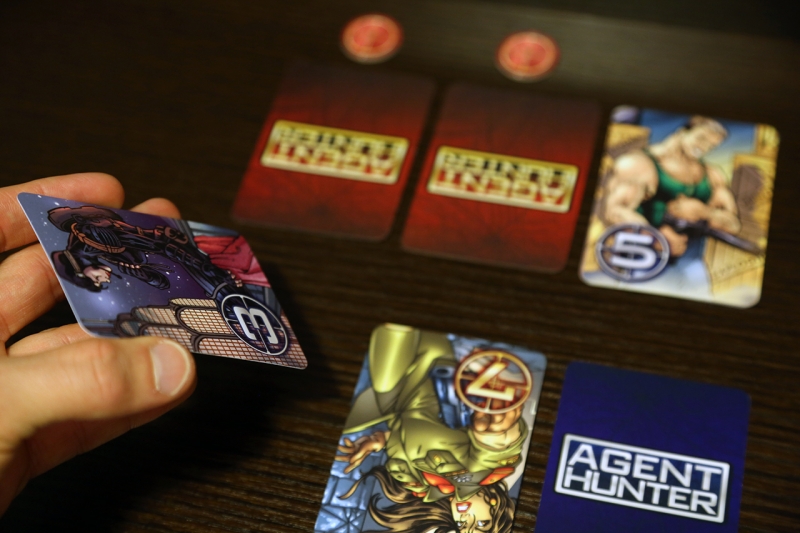 There is a limited amount of strategy, though some is present. Being a game of deduction, luck plays an important role in Agent Hunter. There will be times where you and your opponent are battling back and forth trying to narrow the field and there are other times where your opponent guesses two of your three safe houses in the first two turns (or all three, Steebin). This is a bummer, but that’s Lady Luck workin’ her magic! The good news is that it’s a very quick game, taking up only 15 minutes of your time, so you can start up another round and hope things swing in your favor.

Overall, Agent Hunter is a good filler. It’s fast, requires little set-up, and it’s portable. This makes it easy to bring to work and play at lunch, or any other place where you need a quick fix. The art is pretty cool (albeit inconsistent), but the game, literally, can be played with a standard deck of cards and some tokens. I prefer the art, though! At just under $10, it’s a good game to add to your collection for when you travel or are limited on time. You’ll likely play a round or two of Agent Hunter, be satisfied, and get back to work or move on to another game (which is more than likely the exact definition of a filler).

Biff brought this game in for us to play during our lunch break. The game was very easy to learn and quick to pick up. We played 5 games within 30 mins. This is a nice little game of deduction and manipulation. There is also some luck involved. In one round, I was able to guess Biff’s cards in my first 3 turns for the easy win. I also enjoyed the fact that even though an opponent can eliminate your safe house you still have a chance to win the game. This game can easily be played with a deck of cards using two suits and a couple coins. The artwork and presentation is what makes this game interesting.

This is a pretty sweet little game. I love the sort of puzzle element to it as you try to narrow down which cards are on the table: “I know there’s a 5 in his hand, and that safehouse is higher than 6, but that one is lower than 3.” You can knock out several numbers in only one turn, but as you get closer you’re betting that your opponent won’t change up their safe house. The first time I had the tokens actually reverse a victory, though, I was pretty irritated. The whole point is so you’re not just changing your safe houses the whole game, so I get it, but it’s frustrating when you guess the safe houses and still don’t win!

Agent Hunter is a cool little game. I wandered around AEG’s booth several times at GenCon before finally picking it up. Like Biff said in the review, it’s fast and portable – making it an excellent option to leave in your car or toss in your backpack. There is enough strategy to put it above common luck-based card games like Go Fish! or War, but with a similar amount of randomness that is difficult to control. At (maybe) 5 minutes per game, it’s a great time killer for in between other games or during lunch breaks. Plus, it’s fun. It’s probably the lightest game I own (both in physical weight and general complexity), but I’m glad to have it amongst my collection. It has it’s place, although it rarely spends much time on the tabletop.

I was not very enthused by this game. It is a light filler game that can be learned and played quickly, so it definitely has its place for some. It might just be a little too light. Agent Hunter is a low strategy, high luck game that just did not hit home for me. There are other games that I would certainly choose before this one.