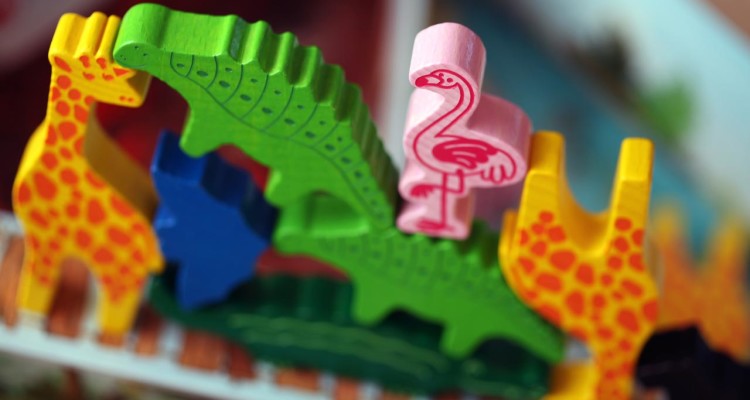 Animal Upon Animal: Balancing Bridge (or Tier auf Tier: Das große Abenteuer, in German) is a game for children and those still young at heart, featuring a cute design and easy-to-grasp mechanics. While ideally targeted toward the younger crowd, the box reads “Ages 4-99” (Sorry, centenarians, this game isn’t for you), and who doesn’t enjoy a little game of hand-eye coordination and dexterity? Watching the animals tumble can be just as amusing as stacking them! 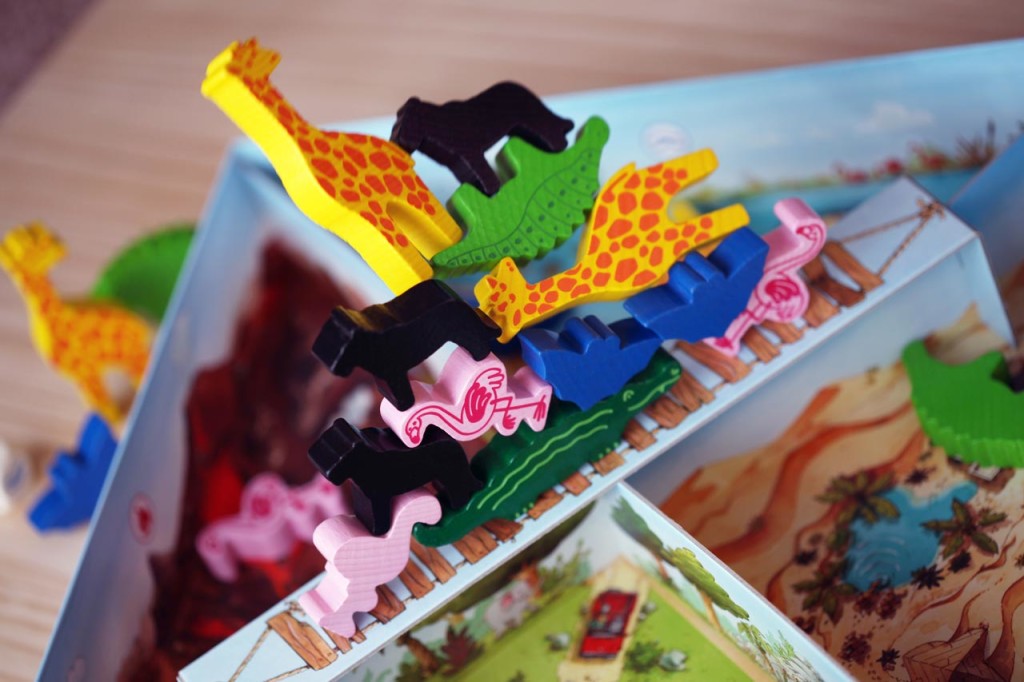 In this installment of the Animal Upon Animal series, HABA has expanded upon the bare bones design of its predecessors, and now includes a nifty little bridge upon which you will balance the animals, and also objective cards which you will have to fulfill in order to win. Additionally, the choice of which animals you try and stack, and where they fall inside of the box once the pyramid topples, will also factor into the gameplay!

The playful, wooden game pieces are of the highest quality, as is expected from HABA. The shapes of the animals lend themselves to some interesting possibilities. For example, the green thing—seriously, what is that green thing? An ankylosaurus?—has a ribbed back, allowing for pieces to stack at much more precarious angles. One issue I have from an aesthetic standpoint is the inconsistency in the game pieces. Only some of the animals have detailing (and only on one side). For some reason, the bat and panther have been neglected entirely. It would have been nice to see some detailed wings and whiskers, but the pieces all continue to perform flawlessly, regardless of this omission. 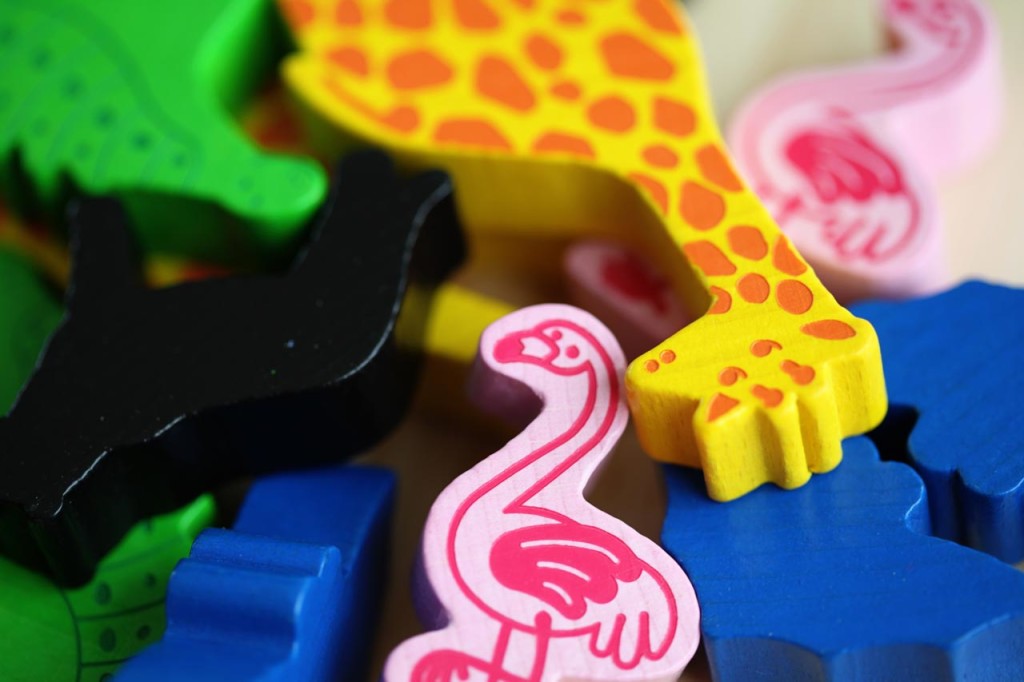 To play Animal Upon Animal: Balancing Bridge, you are randomly dealt three objective cards that each show a combination of three animals. These objective cards give a new and welcome point of focus to your stacking that was not seen in the original version. In order to score your objective card, the animals shown must be stacked in such a way that they are touching. It’s not required that all three be touching one another at once, though. You can have a giraffe that is necking a flamingo that is resting atop what the box art leads me to believe is an iguana. Objectives can be scored on an opponent’s turn, helping to keep your attention focused even when it’s not your turn to brave the bridge. While I haven’t seen it done, I suppose it’s possible to win without actually creating any of your own objectives.

On your turn, you’ll roll the custom die, featuring four symbols that correspond to certain environments (desert, jungle, volcanic, or wetlands), a bridge symbol, and also a question mark. The terrain symbols enable you to pick an animal from the corresponding section of the box and stack it upon the bridge, where the crocodile patiently awaits your move. Rolling the bridge symbol has you rearranging the stack by moving one animal already on the bridge, and the question mark allows you to pick an animal from anywhere you please. If you knock over the stack, your penalty is to draw another objective card. The box is divided into four quadrants, each representing one of the different habitats. After a collapse, if an animal lands in a different environment than what it started in, it can still only be retrieved from the current area when that habitat is rolled on the die. Essentially, that’s all there is to it! Play continues until one person completes all of their objective cards and that player is deemed the winner. 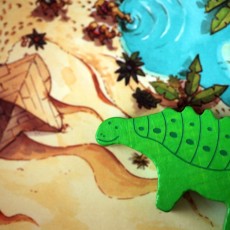 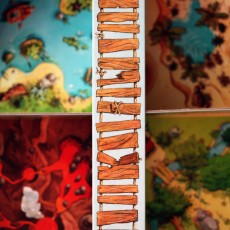 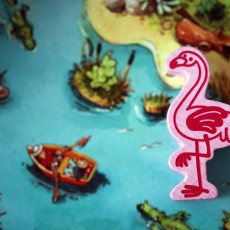 As is with most stacking-games, you want the stack to reach the sky! Unfortunately, unlike its HABA brother Rhino Hero, our Animal Upon Animal: Balancing Bridge games rarely, if ever, reached impressive heights (although, it may look much larger as a smaller child!). That’s not to say it cannot be done; however, we found that you generally completed your objectives, or ended up knocking the stack over entirely before achieving previously unimagined new heights. The hidden objective cards are randomly distributed and their completion is largely dependent on the actions of your opponents. For those with the right mindset (this is a children’s game) this should in no way impair your ability to have a good time though. For adults looking to handicap themselves against younger players or just increase the challenge and playtime, it is possible by dealing each player additional objective cards at the start. Overall, Animal Upon Animal: Balancing Bridge is a great family game that is simple enough for a young child to enjoy with an innocent charm that is able to tap into an adults inner child as well.

Animal Upon Animal: Balancing Bridge, for adults, is likely to be enjoyed in spurts. A few games should satisfy your animal-stacking needs. It plays fairly fast and with more players there is more opportunity for unexpected game-enders due to the fact that you can score an animal threesome on any player’s turn.  For me, the most welcome variant is the one where you taunt your friends! I, personally, found it difficult to knock the stack over, but applying pressure to your shaky-handed friends can lead to a bat not resting snugly between a panther and giraffe, resulting in catastrophe…and hilarity.

There is something about that big yellow box that makes my eyes light up with excitement. HABA has made a name for themselves through the years by providing young children, and adults, with high quality, entertaining games. And the beauty of it all is that the adults will likely enjoy them as much, if not more, than the kids at the table. Animal Upon Animal: Balancing Bridge is no exception. For a bonus lesson in hand-eye coordination/refinement, Balancing Bridge adds the additional layer of physical confinement (the bridge itself) that’s not found in the original Animal Upon Animal. Children will no doubt find excitement in merely stacking the animals while adults are likely to challenge themselves (and their friends) to crazy feats of balance and height. For families looking for a new addition to their collection or gamers looking for a dexterity filler, I would highly recommend Animal Upon Animal: Balancing Bridge.

Animal Upon Animal is an endearing game, and one we have no shame breaking out for some quick fun. To be fair, I’ve never actually played this game with what’s likely to be the intended audience; rather, our games have typically consisted of 4-8 grown men and women all huddled around with bated breath, as our coordination is put to the test. This is where the game has found a home for us—not so much as a practice in rule-following, but instead as a hilarious opportunity to test our mettle and poke fun at friends. In this sense, Animal Upon Animal shines. This game will easily find a place on your shelf underneath your copies of Loopin’ Louie and Grape Escape. Playing with the cards, or even any of the rules, is a take-it-or-leave-it choice when amongst adults – it’s just good clean fun to stack those wooden animals! How it plays with a younger crowd, well, I can’t really say. But I have a little nephew who will likely be stacking right alongside us, once he’s big enough to reach the table.

The League of Nonsensical Gamers would like to thank HABA USA for providing us with a review copy. For more details, please visit their website www.habausa.com.