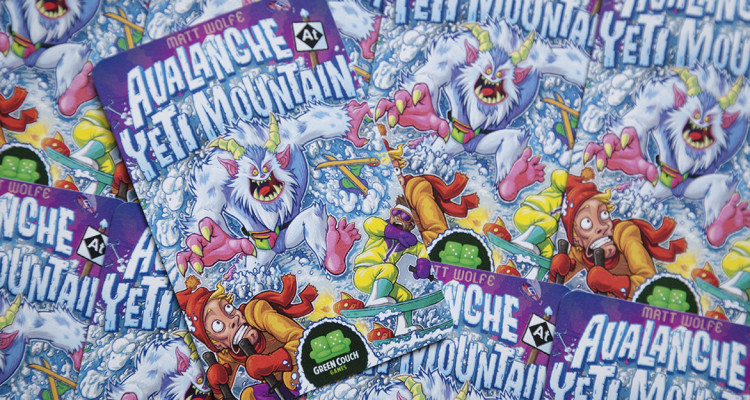 As a young thrill-seeking engineering student, what better way to increase the excitement of careening down a double black diamond than to add a little rocket fuel? Don’t hesitate though, because one malfunction of your turbo rocket skis and you’ll be making lemonade flavored snow cones on Yeti Mountain instead of hanging by the hot tub at the lodge.

Avalanche at Yeti Mountain is a simultaneous action selection and hand management racing card game from designer Matt Wolfe (Wombat Rescue) and up-and-coming publisher Green Couch Games (Fidelitas, Best Treehouse Ever and JurassAttack!). In Avalanche at Yeti Mountain, you take on the role of engineering students who have discovered the next great breakthrough in extreme sports – rocket skis! Only a trip down an actual mountain for hands-on testing stands in the way of your fame and fortune. There’s only one, not-so-small problem with this plan… out of all the mountains you could’ve chosen, you just had to pick the one with a Yeti, didn’t you? 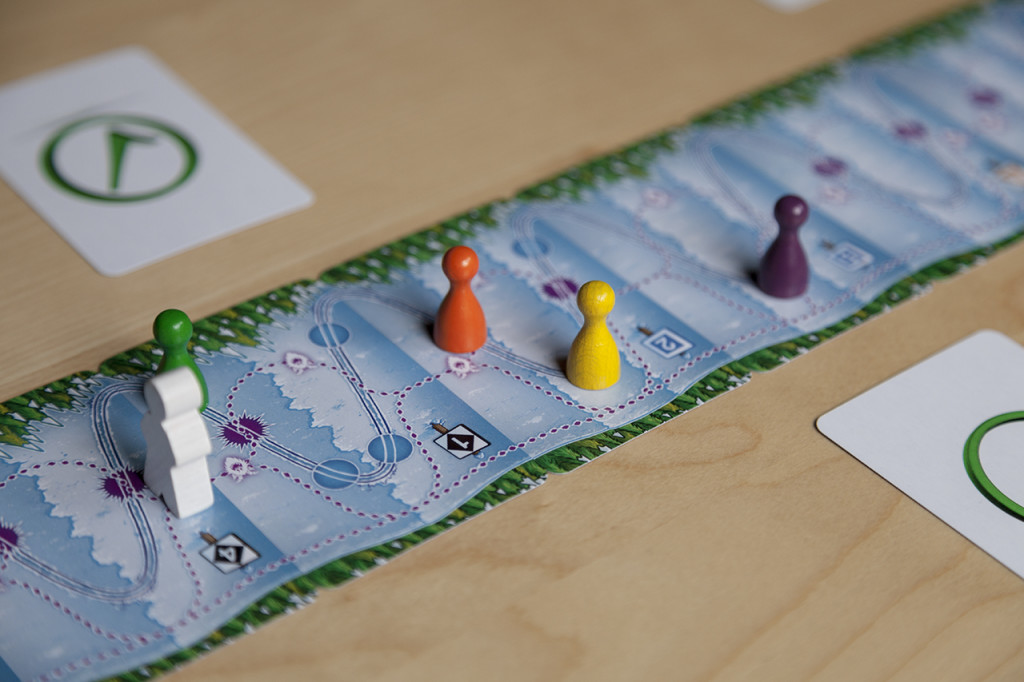 Which way to the bottom?

To start the game, lay out 12 cards in a line to form the slope that you and your fellow engineers will be skiing, then deal out four cards to each player. Besides acting as trails for the slope, each card has a speed number and symbol that will be used for advancing down the mountain.

Each round, you will select one or two cards to determine your speed for this turn. The cards can range in value from 1 through 5, but keep in mind that this mountain has a speed limit! If the total of all players’ speeds exceeds this limit (which will vary from game to game based on the number of opponents), the player(s) with the highest speed will topple over and crash, limiting their movement to only one space. Starting with the player that is going the fastest and continuing down to that guy who makes continual S-turns all the way to the bottom (man, do I hate that guy), players will take turns moving down the mountain.

So, just when do you get to test out these rocket skis? In addition to the speed on each card, there is also one of four possible symbols (circle, square, triangle and diamond). To activate your rocket skis and attempt a jump, you must first make sure your skis are enabled. Each player has a status card that is used to show if their rockets are available to be activated (getting smacked around by the Yeti may, for example, disable your skis for a turn). If you have played a card with a symbol that matches the card your skier currently occupies, and you are the only person who played that symbol this round, you can turn those babies loose! If multiple players end up trying to jump with the same symbol as each other, only the fastest player initiates their jump. If any of those players are tied in speed, then the player furthest away from the bottom of the mountain boots up his rocket skis.

If, when you were determining speed at the beginning of the round, you played two cards with matching symbols, these act as wild cards and you may rocket jump regardless of what the other players have chosen to play. Successfully completing a rocket jump allows you to skip over the remainder of your current card, as well as the next card, landing on the first space of the subsequent card and continuing your movement as normal. 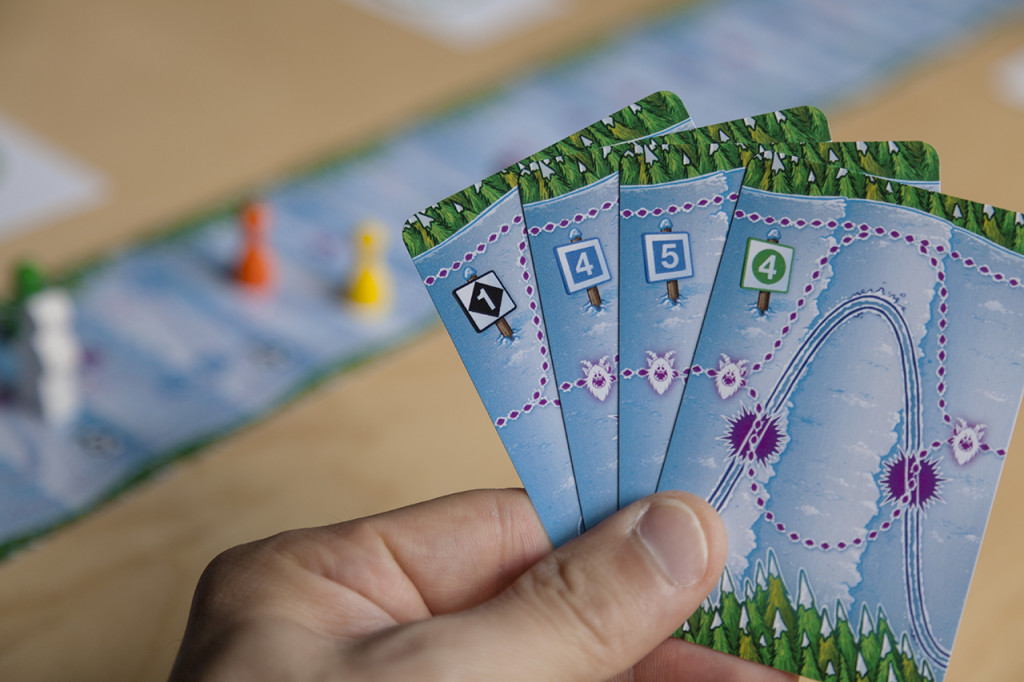 When all players have moved, it’s time for the Yeti to show off his skills! The player in last place takes control of the Yeti and moves him up or down the slope a number of spaces equal to the highest speed card(s) played that round. Since this is his turf, the Yeti has his own trail that he travels on that merges with and diverges from the player’s trail. If the Yeti crosses over your pawn during his movement, your rocket status card will be flipped face down preventing you from attempting a rocket jump next round.

So, you’ve proven that your new toy works and have avoided the Yeti, but what’s that sound in the distance? It doesn’t sound like the rousing applause of spectators left in awe; no, that would be the sound of an avalanche careening down the mountain! Following Yeti movement, slide the avalanche card down the mountain a number of spaces equal to its new speed (the avalanche speed increases by one for each successful rocket jump this turn). If at any point you are passed over by the avalanche, you are out of the game and left to watch as your friends put their skis to the extreme test.

At the end of the round, you may re-enable your rocket skis if the Yeti did not catch you, and then all players draw one card (even if two were played this round). Play then continues until one player has successfully outlasted all of their opponents, or has skied off the final card of the slope to be declared the winner!

Avalanche at Yeti Mountain is an accessible card game that the whole family can enjoy. It reminds me of an analog Ski Free, a beloved PC game from my youth, in how it strives to mix chaos with skill. The simultaneous card selection keeps the game moving at a healthy pace and, like skiing in reality, keeps you on your toes as you gauge the moves of the others on the mountain (have I mentioned I hate that guy who S-turns all the way down yet?).  Each card selection presents a number of decisions for you to decipher. Will I play one or two cards this round; what speed should I play so as to steadily advance, but not push over the speed limit; do I have the symbol(s) necessary to rocket jump; do my opponents have the ability to rocket jump? All of these variables have to be considered each round which makes for an interesting game of hand management and second guessing your opponents. The tension only snowballs as you progress further down the slope with both the Yeti and avalanche in hot pursuit. It can definitely go downhill fast if you’re not careful.

The art is beautifully done by the great Adam McIver, a man who seems to never sleep yet continues to crank out some of the best looking games in recent times. One minor criticism of the game would be that the cards have a lot of information on to them. When laid on the table the slope paths, pawns and artistic detail can feel a bit cluttered on the standard poker-sized card and had us straining to see things clearly when everyone was gathered in the same area. That said, the multi-function cards keep this game extremely portable and lend to its replayability as a new slope is constructed each game.

There are also a number of variants included with the game to shake things up for the advanced players. These include drafting of the speed cards, controlled speeds to limit the cards you can play in subsequent rounds, and an additional race mode.

Avalanche at Yeti Mountain slides effortlessly into the stable of Green Couch Games’ numerous filler-style titles, cramming a good amount of decision making and delightful illustrations into a small package. I highly recommend you check it out; anything else would simply be abominable. 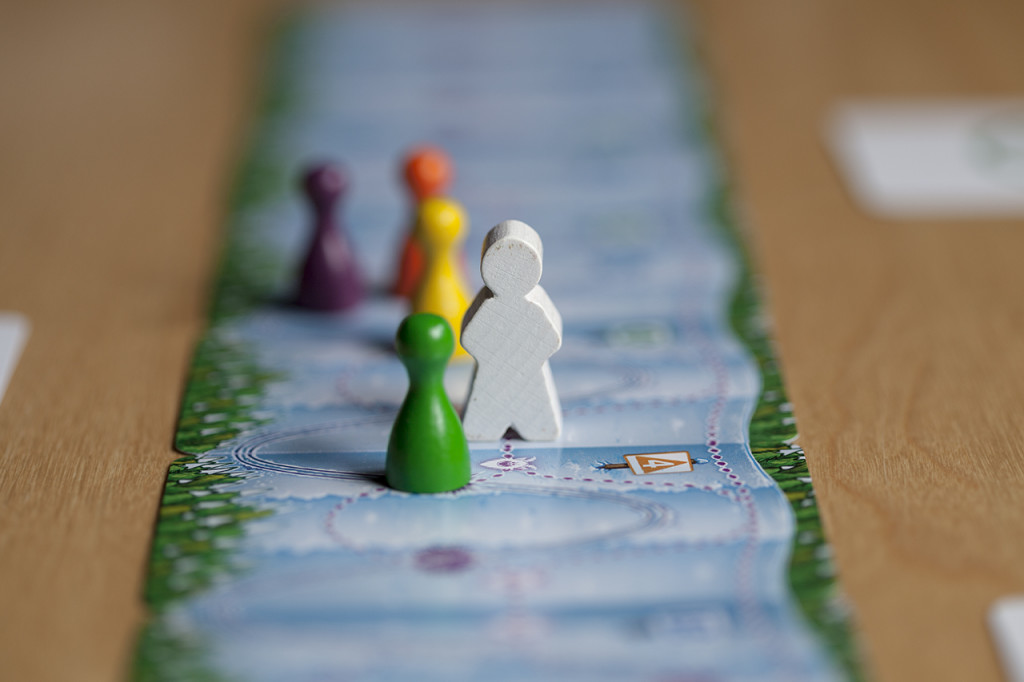 The League of Nonsensical Gamers would like to thank Green Couch Games for kindly providing us with a prototype of Avalanche at Yeti Mountain for this preview.