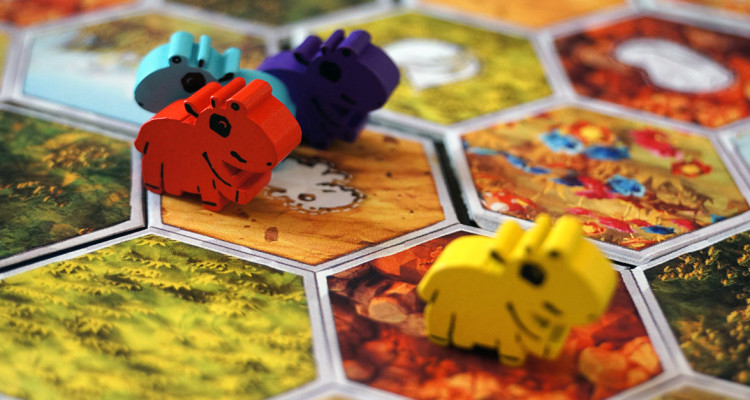 Did you know that wombats poop cubes? It’s true! Scientists theorize that due to extremely poor vision but an excellent sense of smell, wombats use their poop cubes as “smell markers” to help them navigate their environment. Because their poop is cube-shaped it is less likely to roll away or move.

Wombat Rescue is the debut game from designer Matt Wolfe and published by Eagle Gryphon Games. You’re a mama wombat whose babies have run off scared from the dastardly dingo.  There’s only one problem; your eyesight is horrible, and you can’t tell where they’ve gone! Luckily for you, wombats rely on their amazing sense of smell to navigate. Unluckily for you – it’s the smell of their poop that gets them through the day. So forget the grain, wood, and stone; in the quirky and charismatic Wombat Rescue, the cubes represent poop! 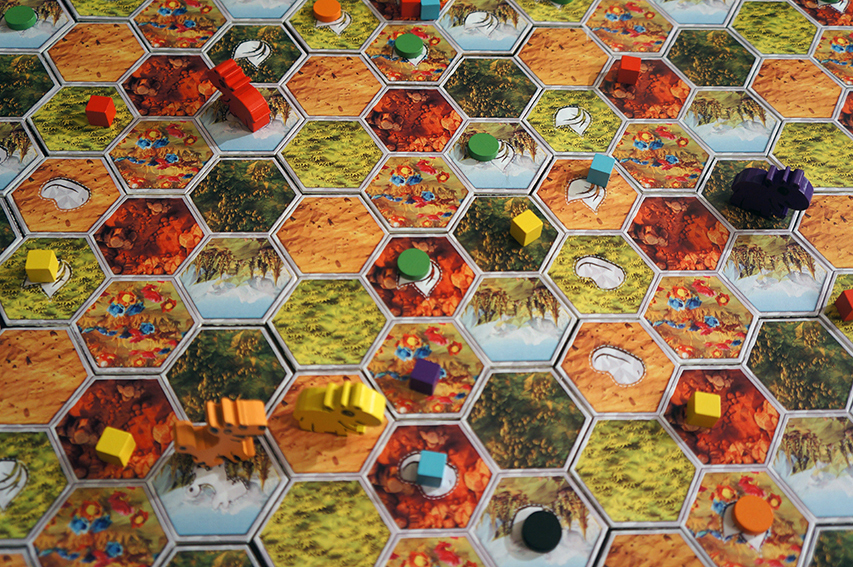 No worries, mate! The dingo didn’t eat your baby.

In Wombat Rescue, you will be moving about the hex-based board gathering food and digesting it to build a network of poop cubes to rescue your babies.

There are three phases to each turn: Movement, Digestion, and Clean-Up. During the Movement phase, you may move your mama wombat up to three times. When doing so, your wombat moves in a straight line until you decide to stop, hit an obstacle, or leave the area of your smell network. Creating and connecting this network is the crux of the strategy in Wombat Rescue. Each of your poop cubes on the board produces a smell radius of two spaces; this allows you to travel freely up to two spaces in any one direction from that spot. Once outside of that radius, your wombat has lost her way and can only travel by revealing the top card of the wander deck. Each card in the wander deck provides the opportunity to move into two of the six terrain types illustrated on the board; you must pick one of these options to move your wombat into an adjacent hex of the same terrain. Blindly wandering outside of your smell area can be dangerous as the options on the wander card may not be optimal. When ending your movement in a space next to a food disc or one of your own baby wombats, you may move into that space and collect it. Food collected is stored in the mouth until it’s ready to be digested. At the start of the game you each have only one poop cube on the home space, so you’ll find yourself forced to wander until your food has run its course and you start pooping cubes to enhance your network radius.

You may also spend one of your four action tiles for a special ability. Run Home moves you to the home space; Scamper moves your wombat one space in any direction; Hold It In prevents you from creating a poop cube this turn; and High Fiber Diet rushes one of your food stacks through the digestive tract to create a poop cube. You can only use each of these tiles once per game, so be prudent. 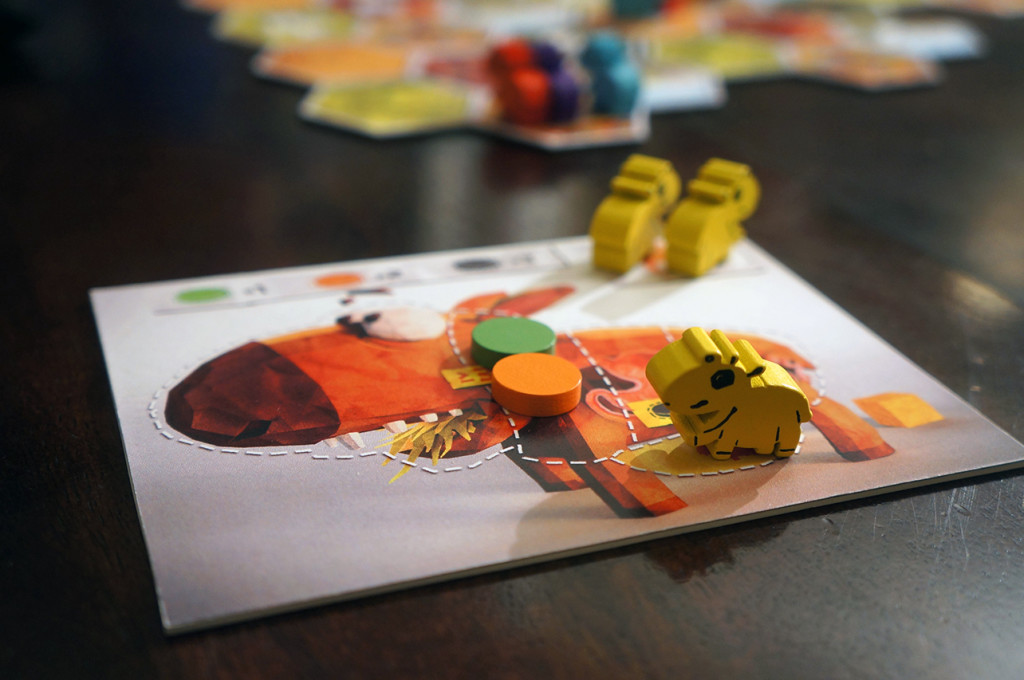 Once movement is complete, it’s time to relax and start the Digestion phase. Your wombat’s digestive tract is divided into three sections, and during this phase any food discs already in your tract will advance one space to the right. Any discs that are pushed out of the butt of your wombat (last space on the tract) produce a coveted poop cube on the board in the same space as your mama wombat – don’t forget to wipe!

Next, food that has been collected during the movement phase can now enter your digestive tract if you’ve eaten enough. There are three colors of food discs, each with a different value: green grass (1), orange herbs (2) and black roots (3). If you have collected food discs with a combined value of three or more, move all of those discs one space to the right so that they enter the digestive tract. Otherwise, the food remains in the wombat’s mouth until you’ve collected a value of three. For example, a black and a green disc have a total sum of four (3 + 1 = 4) and would move on, whereas two green discs would stay put, as they only total a value of two (1 +1 = 2).

The last phase of the turn is the Clean-Up phase. You will refill the food spaces on the board, if necessary, and move the dingo. The player in control of the dingo (the last person caught by it), rolls the die and moves the adorable figure that many spaces towards the nearest wombat. If there is a tie, the controlling player chooses which direction the dingo moves. If the dingo lands in your space, your wombat must return to the home space and any babies in her pouch flee back to their starting space.

The game continues until all four of your baby wombats have returned home.

For the beginning player, the rules are straightforward with only the wombat movement and smell areas potentially giving players a slight pause. I have found that an easy example on the board clears this up. For more details, designer Matt Wolfe has put together an excellent rules explanation here . 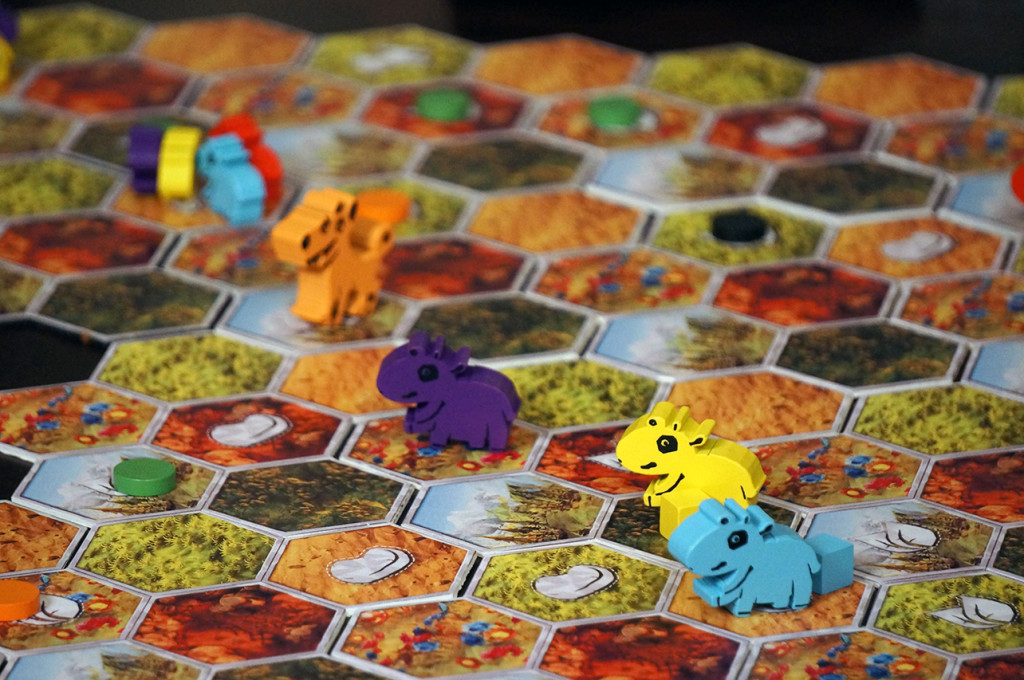 Are you full of crap?

Wombat Rescue is a simple “pick up and deliver” game with a quirky theme, yet beneath the beautiful artwork and poop talk, there are subtle layers of depth. Akin to real-life, you do not want to poop just anywhere. As a society we frown upon that (and still can’t seem to avoid stepping in it, either). When it comes down to it, this is a networking game, after all, and careful planning must go into the optimal placement of your excrement.

The game pace escalates steadily, if not exponentially, as you continue to expand your smell area network. There is a true sense of accomplishment to be felt as you traverse areas which at the start of the game seemed so foreign to your mama wombat. Movement is a breeze, now that she’s pooped all over your table, allowing you to get to and from your baby wombats in 1-2 turns if uninhibited.

There are “take-that” elements involved in the game as player interactivity is somewhat high. For one, it’s important to note that your opponents can derail your movement by pooping inside your network, causing a full stop for your wombat before she can continue on, or even use their own wombat to push you bodily out the smell network and into unfamiliar territory. The dingo is also useful to hunt down specific players, if they’re not keeping aware of their surroundings. These elements only add to the amusement of the game and give just enough reason to pause before making a decision. While the game scales well from one to four players, I have found that in general more players equates to a better experience.

Wombat Rescue is an excellent debut game for Matt Wolfe, and it’s refreshing to see Eagle-Gryphon Games continuing to explore new and unique themes in their catalog. There are not too many games in my collection that need me to manage the digestion of a wombat to create an efficient network of poop. On second thought, there is no game in my collection like Wombat Rescue –and I love that. The stunning artwork, coupled with the light-hearted theme, quick playtime and built-in potty humor provide a charming and inviting experience enjoyable by casual and hardcore gamers alike. I highly recommend that you check this out for yourself and see if it’s a good fit for you. I can almost guarantee you have nothing else like it!

You can also listen to Podcast of Nonsensical Gamers Episode 22 where Matt Wolfe joins us to talk about Wombat Rescue as well as his inspiration/research for the game. 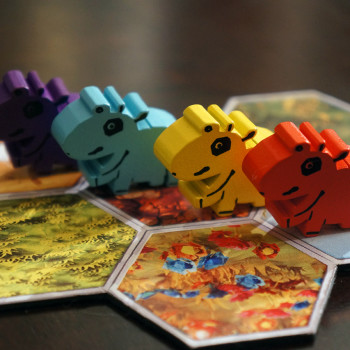 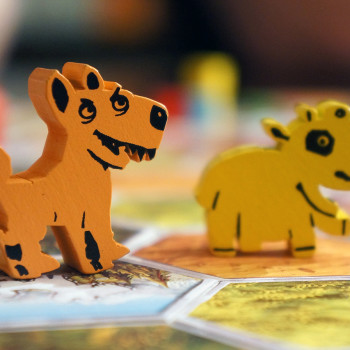 The League of Nonsensical Gamers would like to thank Matt Wolfe for kindly providing us with a prototype (and wonderful pictures) of Wombat Rescue for this preview.

Wombat Rescue is currently funding over on Kickstarter. If this game piques your interests, wander on over to the campaign page by June 15, 2015 to purchase your own copy. For $39, you will receive a copy of the game along with all of the stretch goals that have been attained.