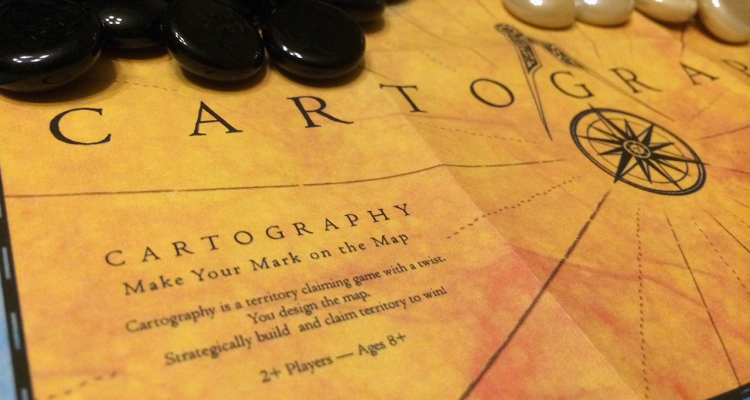 Maps! I hate maps! They never fold up right after you’re done with them. Cartography is an abstract strategy game for two players from designer Jon Adams. Like most abstract games, the mechanisms are simple: place one tile and one unit on each turn in an attempt to surround your opponent’s units. Every unit captured or placed is a point at the end of the game. 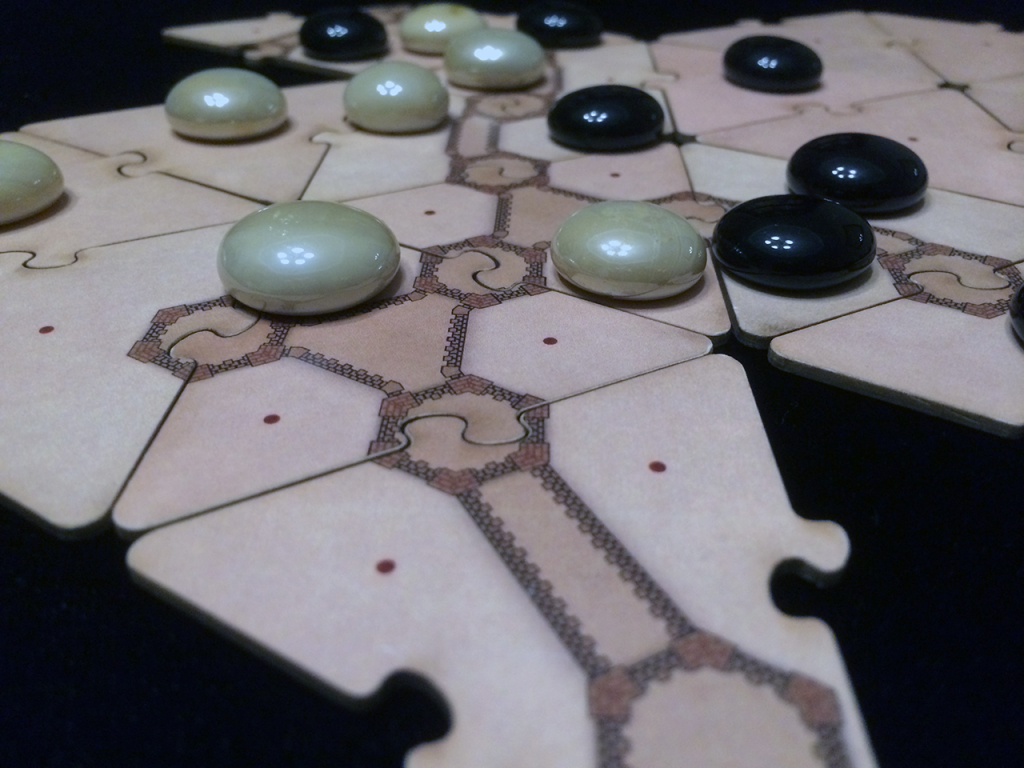 The most striking thing about Cartography is the use of gorgeous, triangular wooden tiles that fit together like a puzzle. I thought it was a visually interesting choice, but it turns out there are also practical reasons for the use of triangular tiles. They limit the possibilities for legal tile placements and also limit the number of liberties for the players. 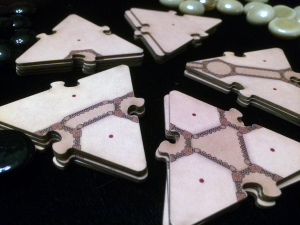 Players start off by placing six blank tiles together to form the Starting Ring. On their turn, each player will place one tile and may place one of their units on the board. Tiles are chosen from face-up stacks and must be placed in such a way that the artwork on the edges match what has already been placed. If a player sees no advantage to placing a unit, they may skip that step. To place a unit, the chosen location must be adjacent to an open space or be part of a group that is adjacent to an open space. The only time this rule can be broken is if your placement will result in the capture of enemy units. If your units have surrounded your opponent’s and there are no open spaces available to them, you remove their units from the board and take them as points.

While in most tile-laying games, the game ends once all of the tiles are placed, this is not the case in Cartography. Play will continue until each of the players have decided to pass consecutively. Score is determined by adding your units that remain on the board to the ones you have captured. The winner is the player with the highest total of points.

As the name suggests, Cartography is a game where you construct a map as you play. This modular set up will make each game a little bit different, as players will have to maneuver their units around different barriers each time they play, and having to adjust your strategy to the ever-changing map is definitely a strength of the game. This is a game best suited for people that have good spatial reasoning skills.

For those looking for a quick(ish) filler or desiring a more strategic time-frame to play, Cartography also provides a way for players to adjust the length of the game. With five tiles per player, a game will last roughly twenty minutes, sometimes even less. With fifteen tiles per player, the game should last around an hour.

With its strong resemblance the game Go, players versed in that system will find Cartography strategically rewards them for their familiarity. That’s not to say that this game wouldn’t make a good stepping stone for those looking to dip their toes in the waters of the age old abstract. Cartography is simple enough learn but the strategy will take players a couple of plays to fully grasp.

Theme integration isn’t usually a top priority for abstract games, so I didn’t have high expectations for that here. That being said, the theme is more like building a castle than it is drawing up a map. The art on the tiles is that of walls, rather than the rivers or mountains I would have expected from a game with this title. Having been in contact with the designer, I know this is something he has considered changing. Either way, there is a theme. It is loose, but may be more appealing than a number of other the stark abstracts. 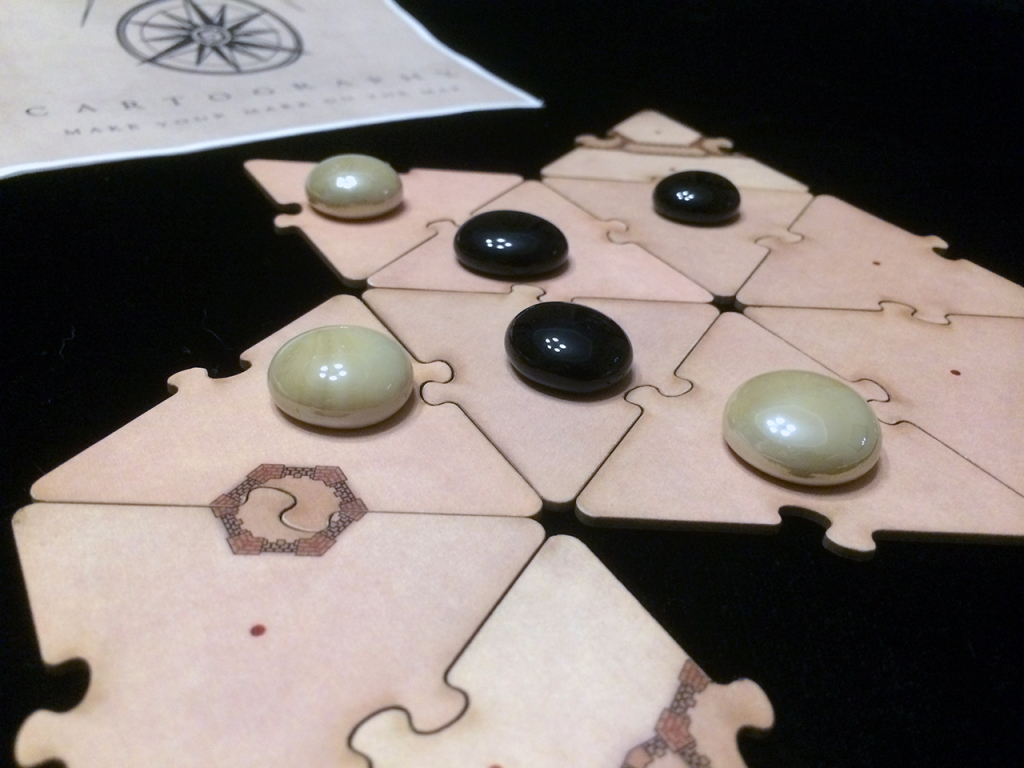 I’ll be the first to admit, abstract strategy is not my go-to genre of games. I have some abstract favorites like The Duke and Carcassonne, but it takes something special to pique my interest in this style of game. Cartography has beautiful components that will certainly attract players to the table, but this is not a game for everyone. It seemed to me, that my opponents more experienced with Go enjoyed this well enough. They seemed to view it as an interesting variant—a new challenge. Coming in without that experience, I was occasionally frustrated as I got massacred by these players.

With the review copy, I was only able to play the shorter game (≈20 minutes), and it felt a little too short for my taste. When playing with evenly matched opponents, a good chunk of the games ended in a not-very-satisfying draw. It is a fine line between close victories and ties, though, as the wins I experienced were all within a point or two, providing some tension.   Even though I wasn’t able to give it a try, I feel that the longer form game would be much more interesting. Alas, based on the short game, I would only recommend this for players that are fans of a fresh take on a familiar abstracts formula.

The League of Nonsensical Gamers would like to thank John Adams for kindly providing us with a prototype of Cartogtaphy for this preview.

Cartography is currently funding over on Kickstarter. If this game piques your interests, head on over to the campaign page by Nov 14, 2014. For $35, you receive a copy of the game.