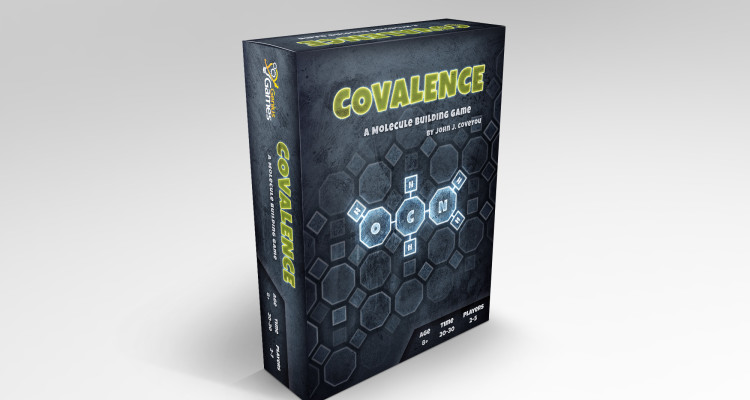 Covalence: A Molecule Building Game is an educational, family-friendly game that bonds well with the style of Genius Games and John Coveyou. In this offering, you are all working as a team to build molecules based on clue cards given to each “builder” by a single “knower”. To allow for more advanced play, certain elements of the game may be adjusted to achieve an easy, medium, or hard difficulty level for the game. 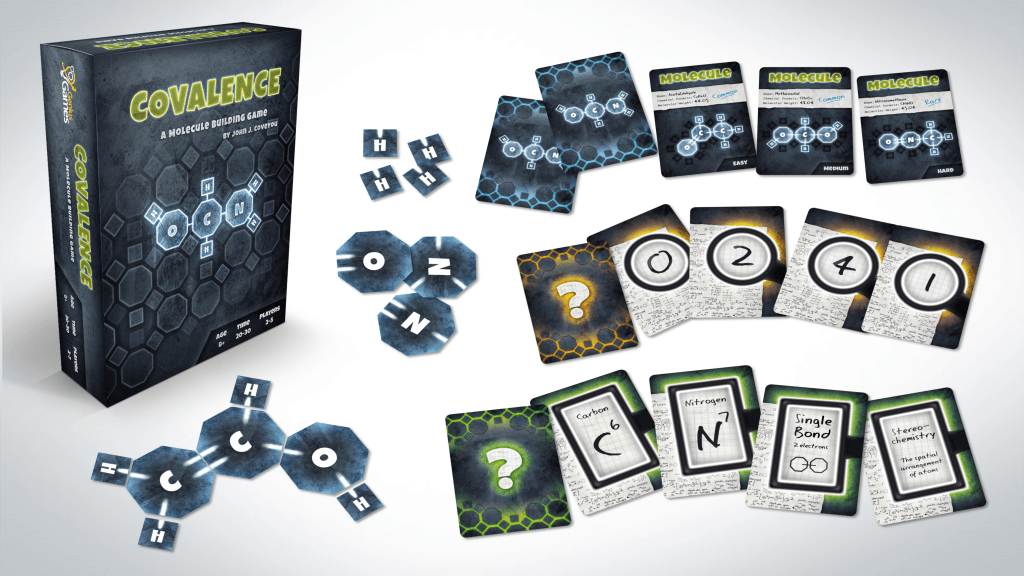 Science is Cool! I Promise!

Covalence begins with the knower dealing 2-3 secret molecules face-down for each builder. The builders are each given element tiles to construct their molecules and are also collectively provided with a certain number of clue and guess tokens, based on the difficulty level. On the other hand, the knower possesses two decks of clue cards, one deck dealing with numbers while the other involves the organic side of chemistry, and begins the game with four cards from each deck available for use. The clues in the organic deck are made up of cards that reference an element (oxygen, nitrogen, carbon, or hydrogen), the number of bonds (single or double), and stereochemistry (the arrangement/order of the elements), while the number clues simply consists of cards numbered from zero through five. 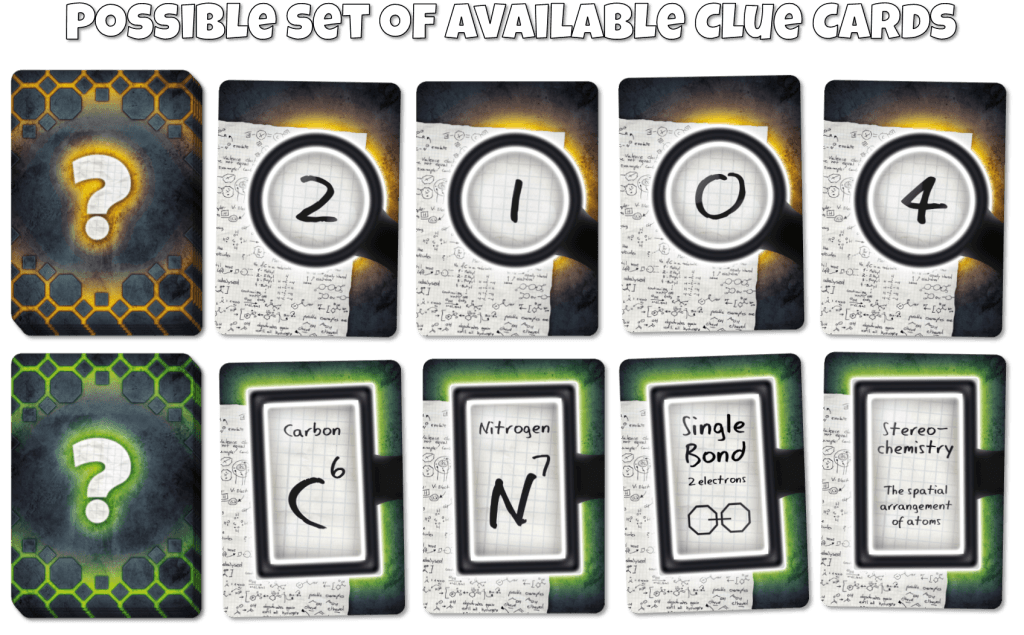 Once these initial clues are given, the builders can begin constructing their molecule using some combination of the 3 core elements (carbon, oxygen, and nitrogen). To request additional information, the builders must spend one of their clue tokens, which allows the knower to provide an additional clue to one builder of their choice. When the builders feel like they have their molecules put together correctly, they can then spend one of their guess tokens. At this point, the knower reveals each of the molecules that have been correctly built. For each builder that is correct, they gain one clue token back to their supply (not exceeding the starting number), and the clue cards for that molecule are discarded. The game continues until each builder has guessed all of their secret molecules correctly, resulting in a win, or they run out of guess tokens and fail.

See, I told You Science is Cool! That was so easy!!

For harder (or easier!) games, the number of tokens available to the builders are just one of the items that will scale with the difficulty. For the easiest game, the builders will start with 6 clue tokens and 5 guess tokens, plus one additional token of each type for every builder beyond the first. For the other levels, remove one of each token for a medium game and yet one more for a hard game. Additionally, the deck of secret molecules contain cards that are labeled as easy / medium / hard. When you set the game to easy mode, only these easy molecule cards will be in play. With these cards, you are guaranteed to have a molecule made up of at least 2 carbons, with the third being either oxygen, nitrogen, or another carbon. There will also only be up to a single double bond. 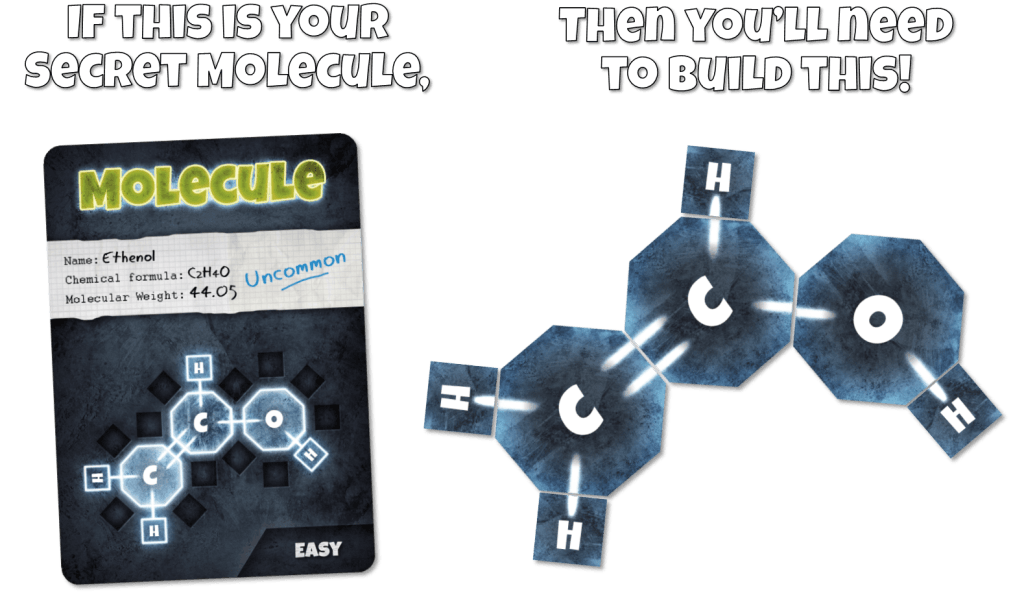 Now, if you’re ready to turn up the difficulty, you can add in the medium-level cards and shuffle them in with the easy deck. The difficulty is increased with the molecules being made up of only a single carbon and some combination of oxygen and nitrogen; these molecules will also only contain single bonds. Ready for even more? Shuffle the hard molecule cards in with the easy and medium and now you have molecules with the same composition as the medium cards, but now they will have one double bond. The trick to this difficulty is that even though you know what gets added in and what rules govern these difficulties, you don’t know which difficulty level you are working on. With enough clues, you may get an idea and use it to your advantage, or perhaps just confuse yourself even more!

Now you know Science is Cool!

After previewing Ion: A Compound Building Game back in April, I was excited to see what they would do next. When John from Genius Games contacted me and indicated that he had a cooperative puzzle game for us to try out, I couldn’t pass up the opportunity; those two words describe some of my favorite board games. After reading the rules, but especially after playing it for the first time, I got a Mysterium-esque feel with one person offering silent clues for the other players to deduce their molecule’s identity.

I also appreciated the ability to change the difficulty of this game, since we quickly became accustomed to the easy level and were solving our molecules with ease. However, I don’t necessarily have that as a fault to the game because it makes it a great educational game that’s fun for kids as well. In terms of player count, it seemed to play better with more builders. I played it 2-player with my wife and while it was easy to teach and get into, it seemed like I was drawing into unusable clue cards more often and being forced to use clue token requests to discard some organic clue cards. With more players it was just more likely that I would be able to use my available clues for someone’s molecule.

I can see the theme being a difficult sticking point for some people to really enjoy this game, though. One of my favorite subjects in undergrad was Organic Chemistry and I always loved working out how to draw molecules from their chemical names, or vice versa. I also think this game has potential to see expansions in the future to add some new elements, maybe molecule cards with bigger molecules or more elements as options. It’s something that I did start hoping for after a bunch of plays; I just wanted more and something new for it.

Overall, I think this is a solid game for any player, but definitely one to grab if you’re a science nerd!

I hated Organic Chemistry. Really it made NO sense to me. Covalence, on the other hand, was easy to learn and a nice puzzle. The growing difficulty of the game based on the addition of harder molecule cards and subtraction of puzzle solving opportunities allowed us to keep playing even when we started guessing molecules based on our first clues. The ability to switch roles also allows your group to switch up gameplay. With that being said, similar to Ion, I think this game will quickly be in need of expansions to add more potential molecules to build or other complications among clue giving. I really enjoyed playing this one and, while I don’t know that it’ll be one to play week after week, I definitely like the idea of pulling it out every couple of months and puzzling out some molecules.

Covalence, the latest offering from Genius Games, fits snugly into their line of games blending legitimate chemistry with engaging gameplay. While there were some growing pains starting out – I frequently asked Kel, as she corrected my placements, “How do you even know that?” – we quickly learned some helpful tricks to at least narrow down the molecule options. Feeling reminiscent of Mysterium, but with a more cooperative bend and lighter overall weight, I enjoyed how Covalence offered a unique style of gameplay in a more easily consumed package. Genius Games accomplishes their goal well with this title and I’m happy to see such a unique combination of theme and mechanisms succeed.

The League of Nonsensical Gamers would like to thank Genius Games for kindly providing us with a copy of Covalence: A Molecule Building Game for this preview.

Covalence: A Molecule Building Game is currently funding over on Kickstarter. Head on over to the campaign page by Nov. 5, 2015 to purchase your own copy. For $19 you will receive a full copy of the game.