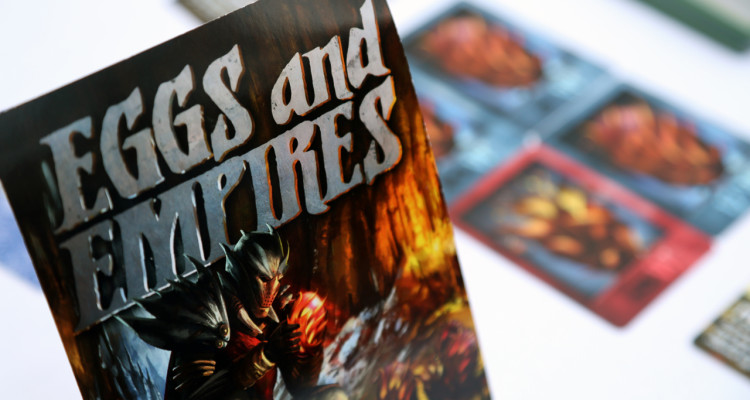 Don’t let the name fool you. This is not a medieval cooking competition on Food Network (although I’d love to see such a thing).  In Eggs & Empires players assume the roles of intrepid adventurers scaling Ridback Mountain, which is just a click north of Ridback Bay, to wrestle the valuable eggs from the nests of the Dragons. However, the Dragons have begun to catch on to the puny mortal’s tricks and have since started mixing in explosive eggs in order to thwart their efforts. Will you be able to outwit your opponents, avoid blowing up, and bring glory to your Empire? Only time will tell (approximately 20-30 minutes to be exact)!

Eggs & Empires is a simultaneous bidding/deduction card game for 2-6 players from Matthew Riddle and Ben Pinchback, the design team that brought us Fleet. Picked up by Eagle/Gryphon Games, the game will be hitting Kickstarter on April 14th.

In Eggs & Empires, all players are provided identical 10-card Empire Character decks, numbered 1-10.  Using a simple role/action selection mechanic, players will simultaneously reveal an Empire Character card.  The highest numbered card chooses first from among the the Dragon eggs available that turn, followed by the second highest and so forth. If you think that sounds simple, well, that’s because it is. However, there is a twist! Each Empire Character card has its own unique power which can affect the order in which Eggs are awarded. The goal of the game is to outwit your opponents and collect as many positive point eggs whilst avoiding the negative exploding eggs. The player with the most points wins.

A game of Eggs & Empires is light and quick, taking between 20-30 minutes to play depending on your player count. Simultaneous card play keeps the downtime to little or none, so introducing it to your friends with goldfish-like attention spans should not be a problem at all. 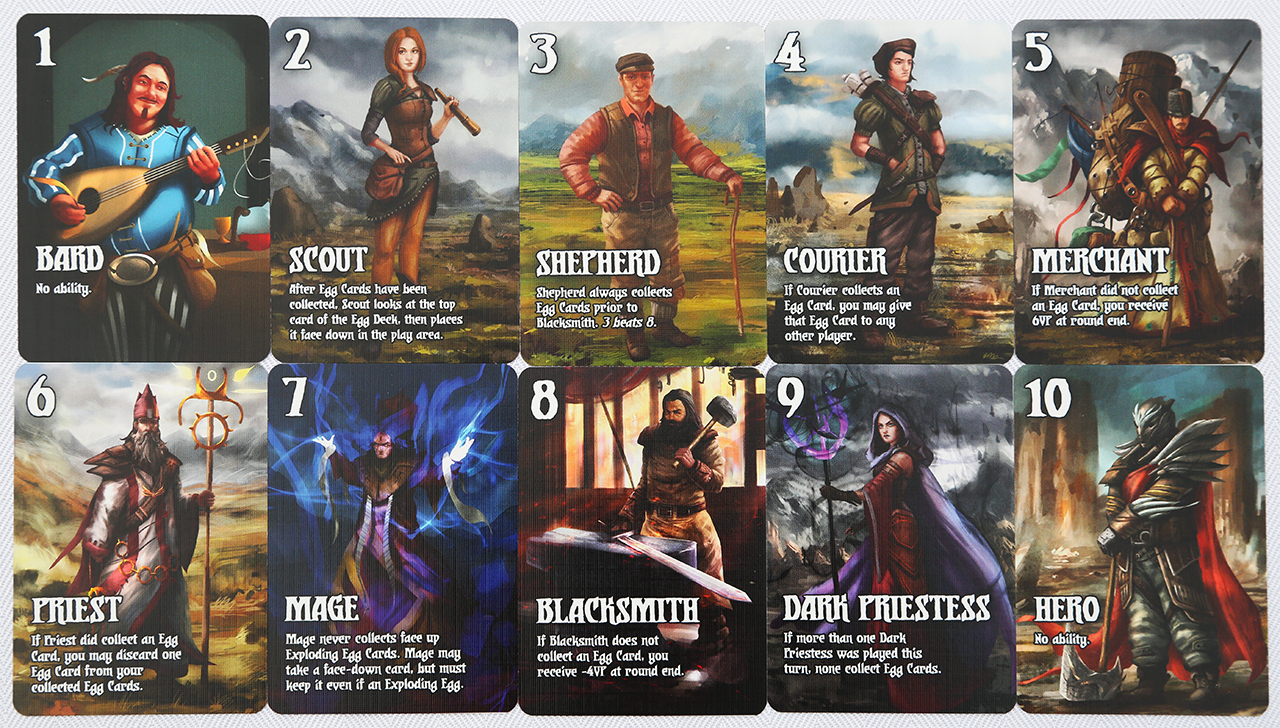 The game contains 60 Empire cards (6 player decks comprised of 10 identical characters), 42 Egg cards, a tiebreaker card and 13 Egg tokens.  While I cannot reasonably comment on the final component quality, I can comment on the amazing art of Cristian Chihaia.  Each Empire Character and Egg card is of a fantastical painterly quality that integrates well with the theme being portrayed.  Selfishly, I would have loved for the Empire Character decks to have different art on each of the characters but I understand the decision to keep it universal.

Set-up is simple. Players will sort the Egg deck based on the number of players (Egg Cards are clearly marked); returning those Egg cards not used to the box. Each player takes a deck of Empire Character cards, shuffles them up and draws 3 cards. A mulligan is allowed on the first hand of each round. Shuffle the Egg deck and reveal the starting Egg cards based on player count (2/3/4 players = 2 eggs; 5 players = 3 eggs; and 6 players = 4 eggs).  The rules clearly state that “The last person to be eaten by a Dragon is given the tiebreaker card.” Yes, you read that right. When in doubt choose the last player to be bitten or gently nuzzled by an iguana. 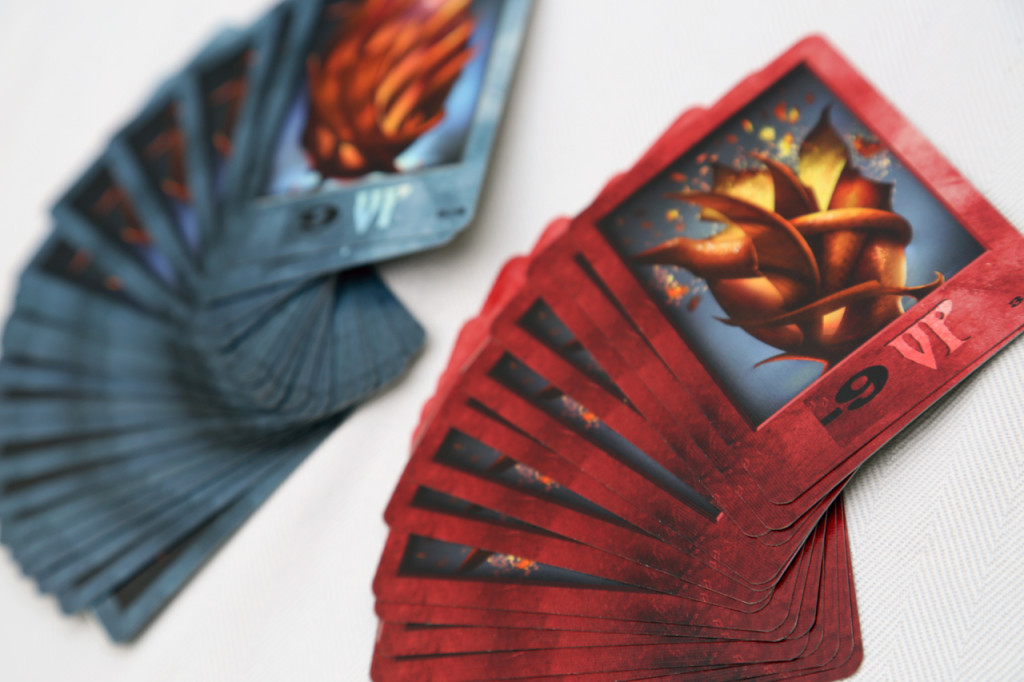 The game is played over 3 rounds with 9 turns in each round (one card will remain unused in the player’s hand at the end of the round). A player’s turn consists of the following: 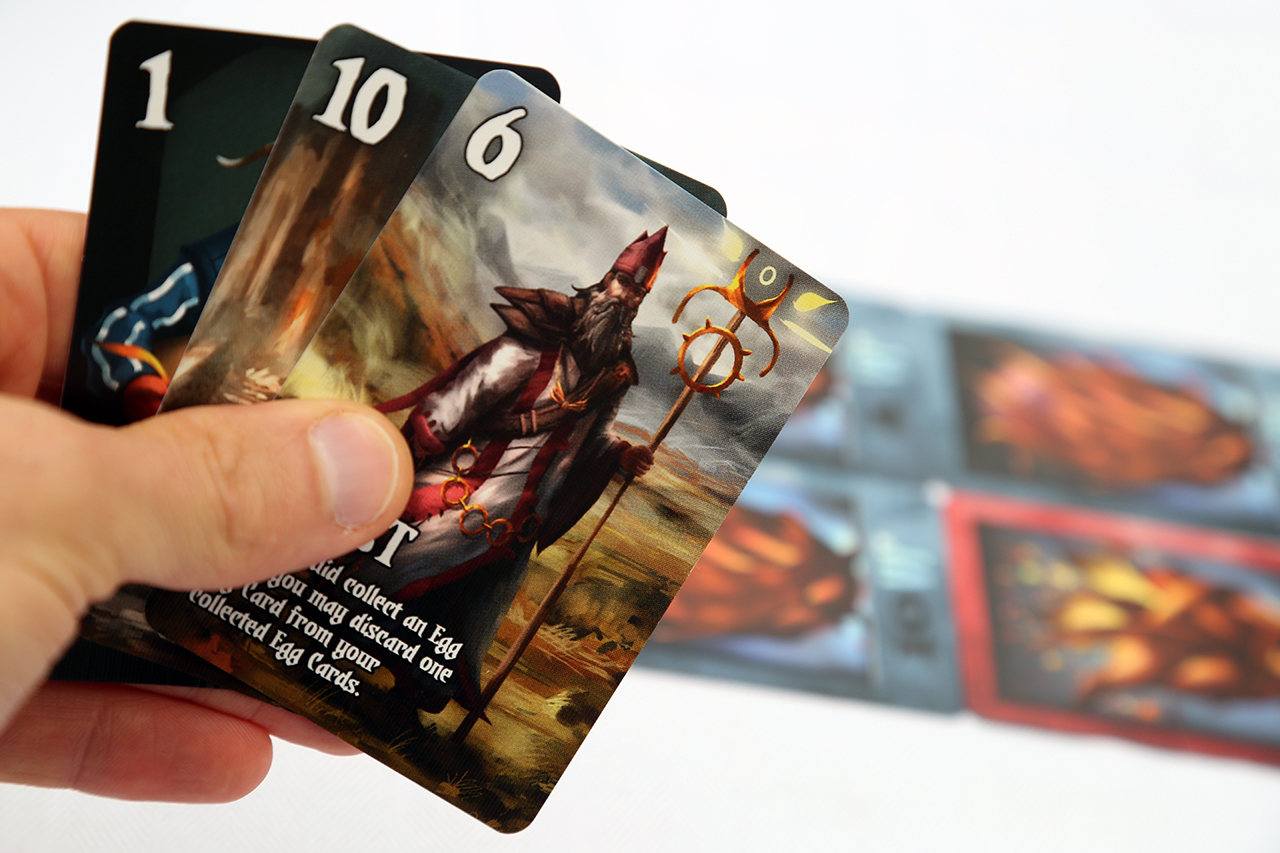 It is not unlikely that players could reveal identical numbered cards. Ties are broken by player order, starting with the person in control of the tiebreaker card and going clockwise. If a tie is broken in a given turn, the tiebreaker card is passed to the next player in clockwise order.

After 9 turns have been played (players have one card remaining in their hand), the round ends. Players will tally their positive egg points, subtracting any negative point eggs, to come up with their final round score. There are two types of scoring methods for Eggs & Empires: Points and Con/Pub.

The game and its rules are streamlined and concise, allowing for quick setup and rules explanation. There isn’t much left for interpretation after a read of the rulebook and a quick play through an initial hand, making Eggs & Empires easily accessible to most age ranges and gamer types. Once you have a few rounds under your belt, the synergy and subtle strategy involved in triggering the various characters’ powers will start to shine through.  The unique powers given to each Empire Character card provide players familiar with games like Love Letter and Citadels a recognizable mechanic to build from. 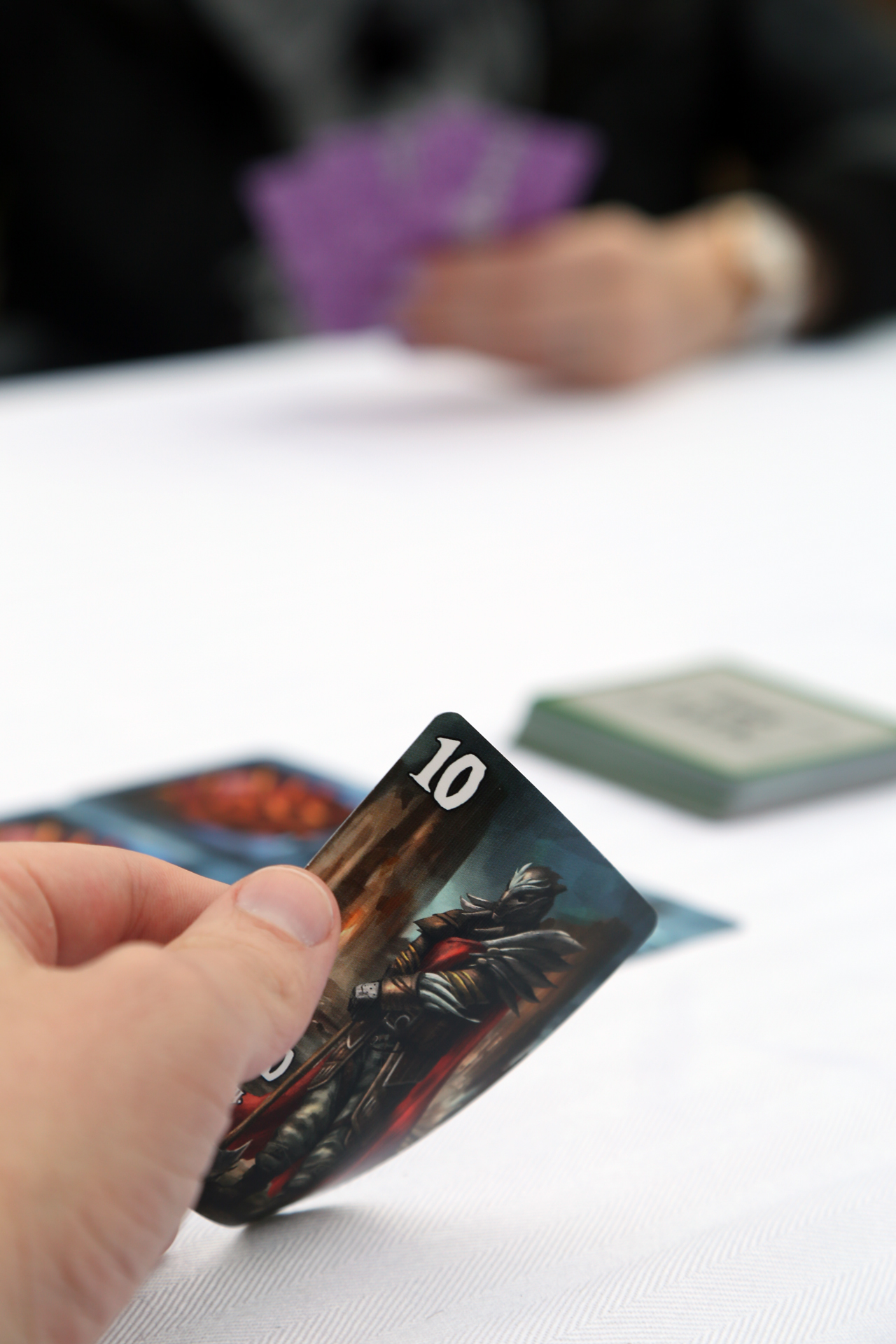 While it scales well for all player counts, the experience for each was completely different. The game contained more strategic, predictable decisions with 3-4 players that are not found in the 5-6 player game. Only 2 eggs are available for the taking; the result of which is that, at least 1 (or 2 in a 4-player game) of the players misses out each round. This makes being able to deduce what characters your opponent may have available, based on those already played, very important in your quest to obtain the valuable Dragon eggs (or avoid the negative valued eggs). With a larger player count, the egg scarcity is still present, however it becomes even more complicated to try and predict what your opponents have available and which direction you should go in order to counter. It is a far more loose and social game with 5-6 players, and that should not be seen as a negative.

With each player having the same 10-card deck, ties are inevitable. The tie-breaker rule adds a modest additional element of strategy to each play and will definitely factor in to your decision-making as you gain more understanding of the cards and your opponents. For instance, a high VP egg will easily attract the attention of all the players. Knowing that you are likely to see a flood of high cards vying for this egg, one must consider their position in the tiebreak (in the event of more than one player using the same card) so as to not waste a valuable high card on the second best egg or worse, a negative one.

Eggs & Empires does a great job of utilizing its minimal components to charmingly convey the games’ theme. A lot of this boils down to the beautiful artwork from Mr. Chihaia which made repeatedly staring at your hand of cards worth it.  And while light and fun, this game is not completely devoid of strategic decision making. Overall, Eggs & Empires will find its place in your collection as a filler game and do a great job when called upon to fill that role.

Following their success with Fleet, this design duo have come up with another game that’s a hit with the League. Eggs & Empires perfectly fills the role of a quick, entertaining and accessible deduction-based card game that novice and hardcore gamers alike will surely enjoy!  It’s overtly light and simple, yet provides players with enough insightful choices to make things interesting and hold your attention. For the price point of $16 you cannot beat the value here.  I would highly recommend you check out the Kickstarter campaign and add this one to your collection!

Having played games with a similar deduction mechanic and familiar character roles, I felt comfortable with Eggs & Empires from the start. I also had a feeling I would like it. And I do! Although I enjoyed it more with fewer players, each game was still enjoyable in its own way. Fewer players allowed for more strategy, while at the maximum player count, things became unpredictable. Additionally, there are 2 suggested scoring methods—points and pub. Using the points scoring method (highest total score at the end of the game wins), it was easy to become discouraged because someone pulled in a huge total and you got boned and were left with…a negative total. I preferred the pub style scoring (highest score at the end of the round earns 1 token), as it seemed to create a little more tension while giving you the impression that scoring is less lopsided and provided everyone a chance to pull out a victory. I would definitely recommend Eggs & Empires to gamers and non-gamers alike. At a very reasonable price point, I see no reason not to give it a whirl.

Akin to games like Love Letter and Coup, Eggs & Empires feels familiar enough to jump right into, but different enough to be fresh and unique. The combination of a stripped down rules set and ten different roles makes for a game that fully emphasizes the simple, yet varied, gameplay. There is no room for “gaming the system” here, as the core mechanics highlight strategic choices, card-counting and a little bit of luck. E&E is definitely a lighter game, but one that will easily be played several times in a row, allowing it to bridge the gap between game night opener and main event. Both scoring systems, pub and points, have their merits, although the pub scoring is much more forgiving, making for a more casual experience. And, though it has been mentioned before, the art is quite good, especially given the price point for this game. Overall, I look forward to seeing the end product and will likely be playing this game a number of times in the future.

Eggs & Empires is a nice little competition and I thoroughly enjoyed playing it. I played in a larger group and it did not leave as much room for strategy, as I’m not able to remember and count the cards of five other people, while trying to play my own cards. Eggs & Empires gives you a nice opportunity to try to read your opponents as everyone is trying to get those eggs. Points scoring was kind of disappointing, at least for me, because I found myself in a large deficit from which I could not recover. However, I had a good time playing and look forward to playing more!

The League of Nonsensical Gamers would like to thank Matt Riddle and Ben Pinchback for kindly providing us with a prototype of Eggs & Empires for this preview. Eggs & Empires is currently funding over on Kickstarter. If this game piques your interests, fly on over to the campaign page by May 14, 2014   and show your support by backing it. At $16, a copy of the game and all stretch rewards is a steal!