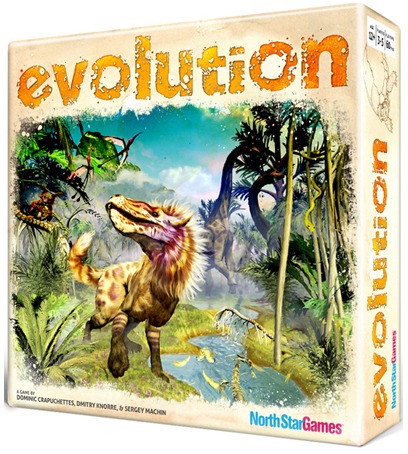 Recently, I had the opportunity to play a couple rounds of North Star Games’ latest offering, Evolution, at Games and Stuff in Glen Burnie, MD. Just off of a successful run on Kickstarter, Evolution is a remake of the original 2010 game, and a bit of a departure from the publisher’s usual line of party games.

A strategy card game for 2 to 5 players, Evolution forces you to adapt to the changing landscape around you by introducing new species, and adding essential traits to existing ones. It’s survival of the fittest, and you don’t want to be left behind!

Each player begins the game with a single, unimpressive species and a small hand of cards from which to evolve and grow from. On future turns, players will receive additional cards based on the number of species that they have in play. The game will last until the deck of cards is exhausted, at which point the discards are reshuffled and the current round is finished out. 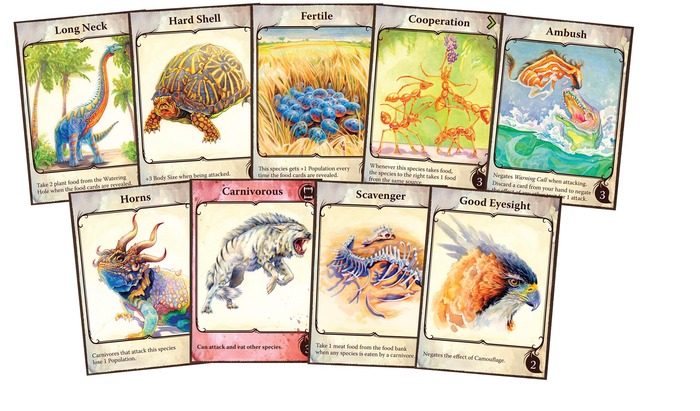 The cards that you’ll get at the start of each round are the ‘currency’ of Evolution, and can be discarded to either place additional species into play, or add to the Population or Size level of an existing species. These cards also contain valuable traits that can be played on your species, so you’ll have to balance between these uses!

At the end, victory points are determined by the amount of food consumed throughout the game, along with the total population and the number of traits of your surviving species.

At the beginning of a round, each player is dealt 3 cards, plus one additional card for each species they have in play. One card from each player is then played face down in the center of the table to form the food pool for that turn; the number in the lower corner of the card denotes how much plant food will be available at the Watering Hole during the feeding phase of the turn. In player order, everyone then takes their full turn before passing onto the next player.

During a player’s turn, they may perform as many of the following actions as they wish:

Once all players have taken their turn, all cards are turned face up and new traits are immediately active. At this point, fresh food is added to the Watering Hole from the initial cards played at the beginning of the turn, and the feeding phase begins. 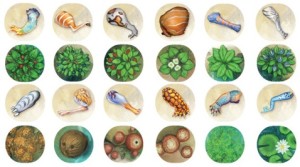 In turn order, each player selects one of their species to feed, and takes one plant food token from the pool. Many traits may modify this process, with Foraging allowing you to take two tokens instead of one, or Cooperation allowing one of your other species to feed at the same time. A good portion of the game comes from exploring the possible combination of traits between species under your control!

While every species begins as a plant-eater, the Carnivore trait is also one that can be added. They have a slightly harder time of feeding, however, as they cannot eat plant food at all; these animals must hunt other species to survive. When feeding, a Carnivore chooses another species of lower body size that they can attack (there are quite a few defensive traits, too!) and lowers the population by one. They gain a number of meat tokens equal to the prey’s size, but keep in mind that you can never take more food than your own population.

Once every species has eaten its fill, or there’s no more food to go around, the feeding phase ends. Any species that did not get enough food reduces its population down to the number of food tokens that it acquired. If a species received no food, it is discarded from play. All eaten food is then ‘scored’ and put into the players’ food bag, to be counted as VPs at the end of the game. A new hand is dealt at this point, and the turn begins anew!

After a couple of plays, Evolution appears to be a quick, fun little game that holds the possibility for some interesting strategies to develop. It always pays to keep an eye on what your neighbor may be doing, and evolving some bigger teeth and sharper claws just might be the right response! Unfortunately, being a card-based game, it’s always up to the luck of the draw whether or not you’ll be dealt traits that can effectively interact with one another.

While I have not played the original Evolution: The Origin of Species, I’m told that this revision intentionally set about fixing certain shortfalls, namely cutting down on the pain of losing a species by supplying the player with a ‘refund’ of fresh cards equal to the number of traits associated with the extinct species, along with formulating the consistent scoring of the per-round consumed food, to give the player a goal throughout the game in addition to the all-or-nothing endgame points.

Having funded at over $120k of a $10k goal, they’re planning on including materials for a 6th player, as well as a whole host of upgraded components that should be available in every retail box. Due out in October of this year (well, we’ll see about that…), I’m looking forward to getting a few more plays of this in once it’s out for real.