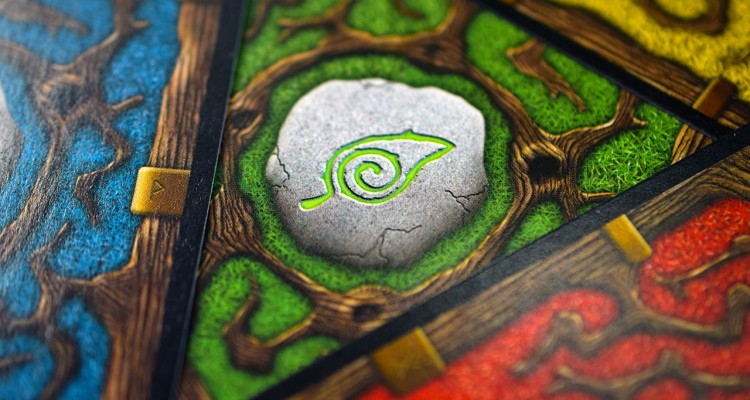 Cursed by the dying, wicked King, Gaia now calls upon you and your druidic brethren to restore life to the Valley. Be swift, but be cautious as well, for the very lifeblood of your clan depends on your work. Strengthen the Valley, strengthen your claim, and rid the land of this evil!

One of the most exciting parts of the blossoming hobby board-game market is the innovation that stems from a healthy influx of new minds and publishers open to clever ways of experiencing play. Fortunately for us – the players – AEG has brought us an introduction to one element of John D. Clair’s ambitious title, Edge of Darkness, in a stand-alone experience.

Mystic Vale is a deck-building game utilizing the new Card Crafting System, which has players constructing the individual cards in their deck using clear plastic sleeves and layered transparent cards – similar to those found in Keith Baker’s Gloom. Through this system, players improve the potential of the individual cards in their decks as they race to score the most points and claim victory. 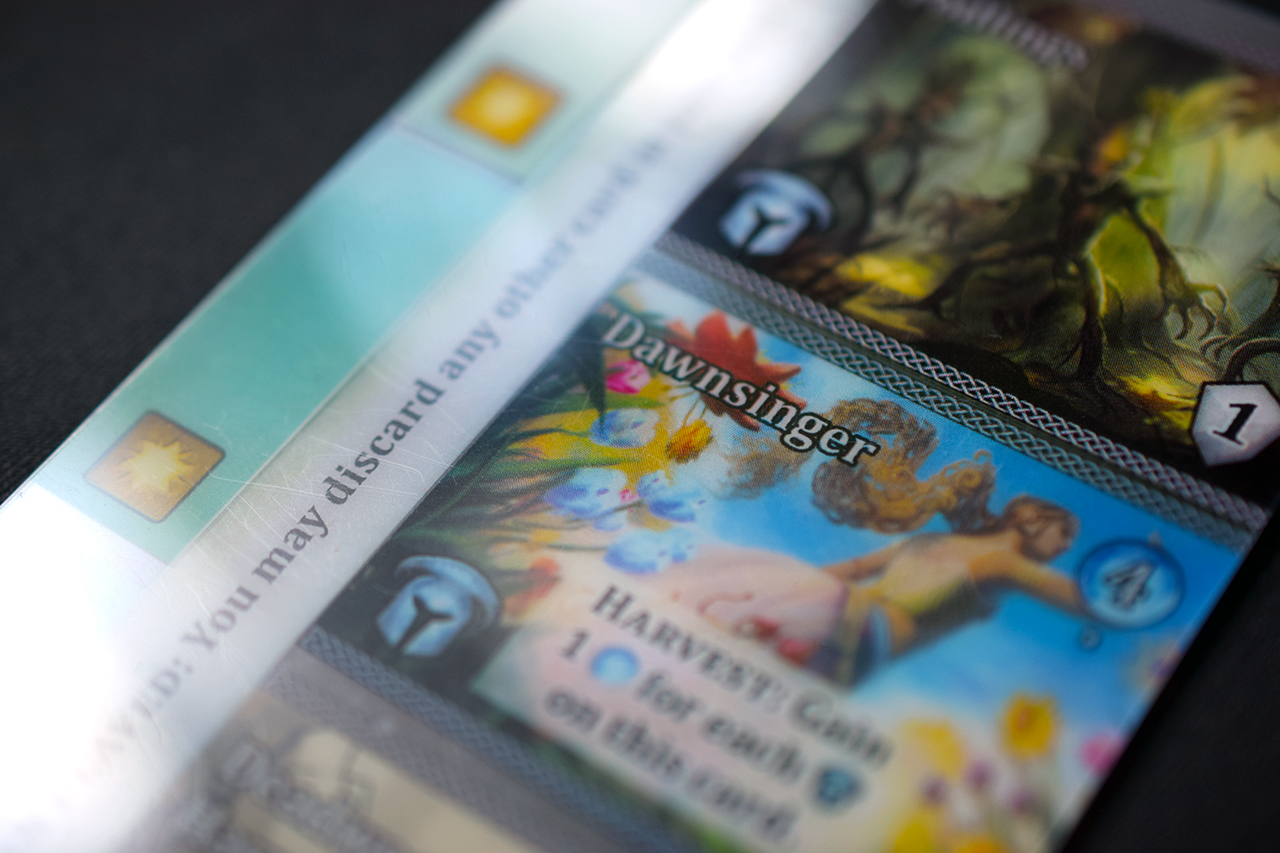 The World of Card Craft

Mystic Vale is played across a variable number of turns until a pre-determined pool of victory points is exhausted, ending only once all players have had an equal number of turns.

One of the notable elements from both a mechanical and balance standpoint within Mystic Vale is the variation in card availability that you’ll have at the beginning of each turn. Rather than drawing a set number of cards, your playing field is dictated by the occurrence of the red ‘Decay’ symbols found primarily on the nine Cursed Land cards in your twenty-card starting deck. At the end of each turn, you will discard all of the cards from your field and begin staging your next hand by turning over the top card of your deck, termed the “on-deck card.” If you have fewer than three Decay symbols showing among the currently face-up cards, you must add that card to your field and continue turning. Only once three or more Decay symbols are showing, your field is set for the next turn.

When play comes back around, you now have the option to push your luck and add that final on-deck card to your field, revealing the next card of your deck in the process. You may continue to do so until you choose to stop, or have revealed a fourth Decay symbol. If the latter ever happens, your field has ‘spoiled’, and the turn is lost. This makes card counting and calculated risk management an important piece of drawing additional cards.

Sure, the technology is unique, but at the end of the day what does it offer?

Once you have formed a playable field, you can use the Mana and Spirit symbols found on those cards to acquire up to two Advancement and/or up to two Vale cards. Advancements cost Mana and will be added into the sleeve of one available card in your field, thus crafting (get it!?) a more powerful card for future turns. Vale cards require a certain number of Spirit symbols to be purchased, and are placed permanently into your field to offer end-game victory points in addition to occasional small bonuses during your turns.

Other than these specific elements, Mystic Vale plays much like any other deck-building game. When your deck runs out of cards, you shuffle your discard pile and continue on, buying new cards, activating their powers, and scoring points along the way. Outside of the two card buying restrictions, the only other notable limitation is in the three-tiered crafting. Players may never overlap sections on a particular card, so purchasing Advancements is sometimes informed by their position – whether top, middle or bottom – in addition to their ability text. Outside of this, players may select whichever of the the nine available Advancements or eight available Vale cards that they can afford, then discard their field and begin prepping for the next turn – until the game concludes. 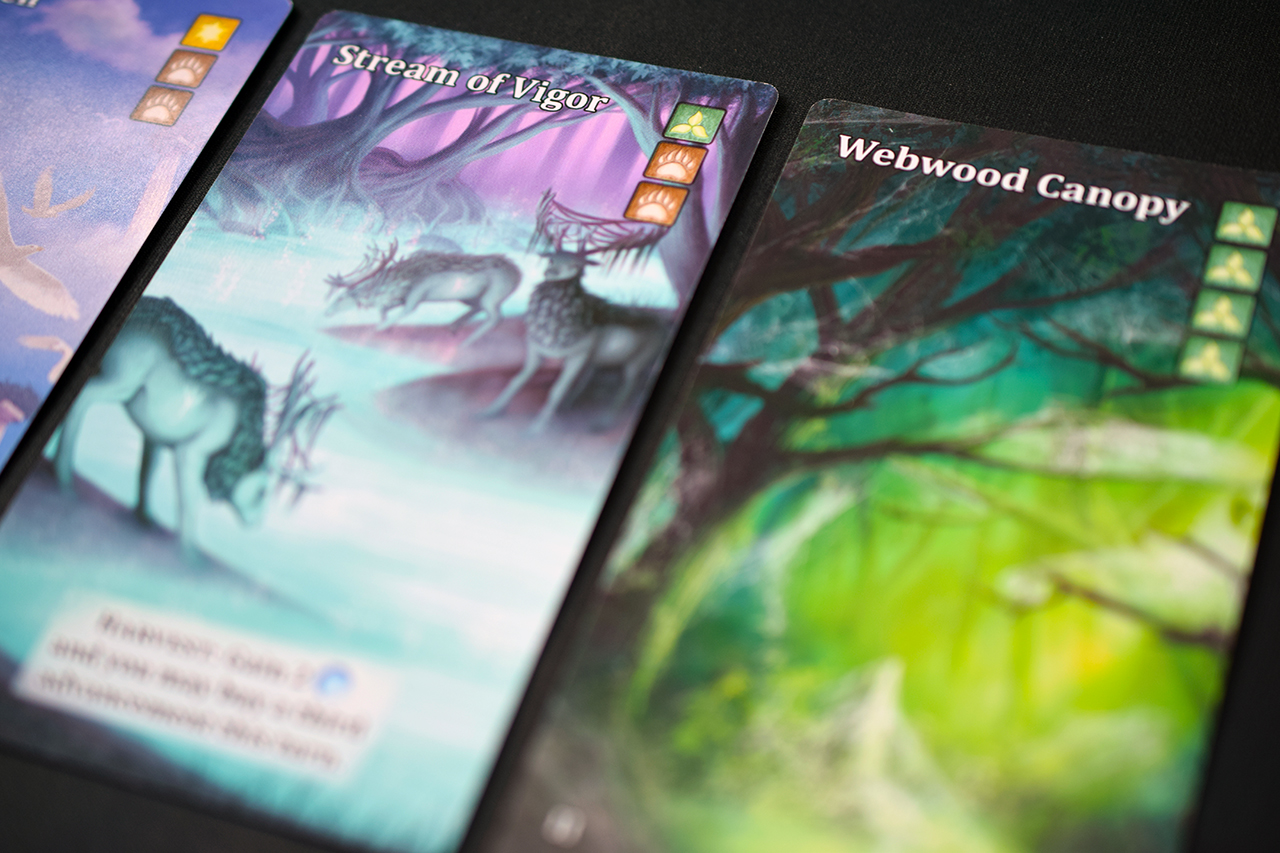 At first glance, Mystic Vale seems to coast on a gimmick. Sure, the technology is unique, but at the end of the day what does it offer? In many ways, this sentiment is both correct and incorrect. By definition, yes, the Card Crafting System is a gimmick – it is a device used to draw attention – but neither does it warrant the negative connotation associated with the term. It’s sole purpose is not a superficial addition to a cookie-cutter experience; this crafting system truly is the embodiment of Mystic Vale. It couldn’t exist without it.

So, the technology definitely works and supports the scenario as designed, but what about the game itself? That is where Mystic Vale takes a hit; it is very much a vanilla deck-building game. With no interaction, unengaging theme and little internal variation, it does little to break the mold in terms of how and when you’re scoring your points. Every turn is: 1) Count your currency and 2) Buy what you can. There is definite consideration in where you place your advancements – I still have yet to master the balance between spreading value across cards and cramming them into a few – but that choice point has diminishing returns across multiple plays. There is also the lack of variation that ability-selection deckbuilders like Dominion offer, because while only a certain number of Advancements are available during each game, they are still mixed together, causing the overall distribution to remain similar from game to game. 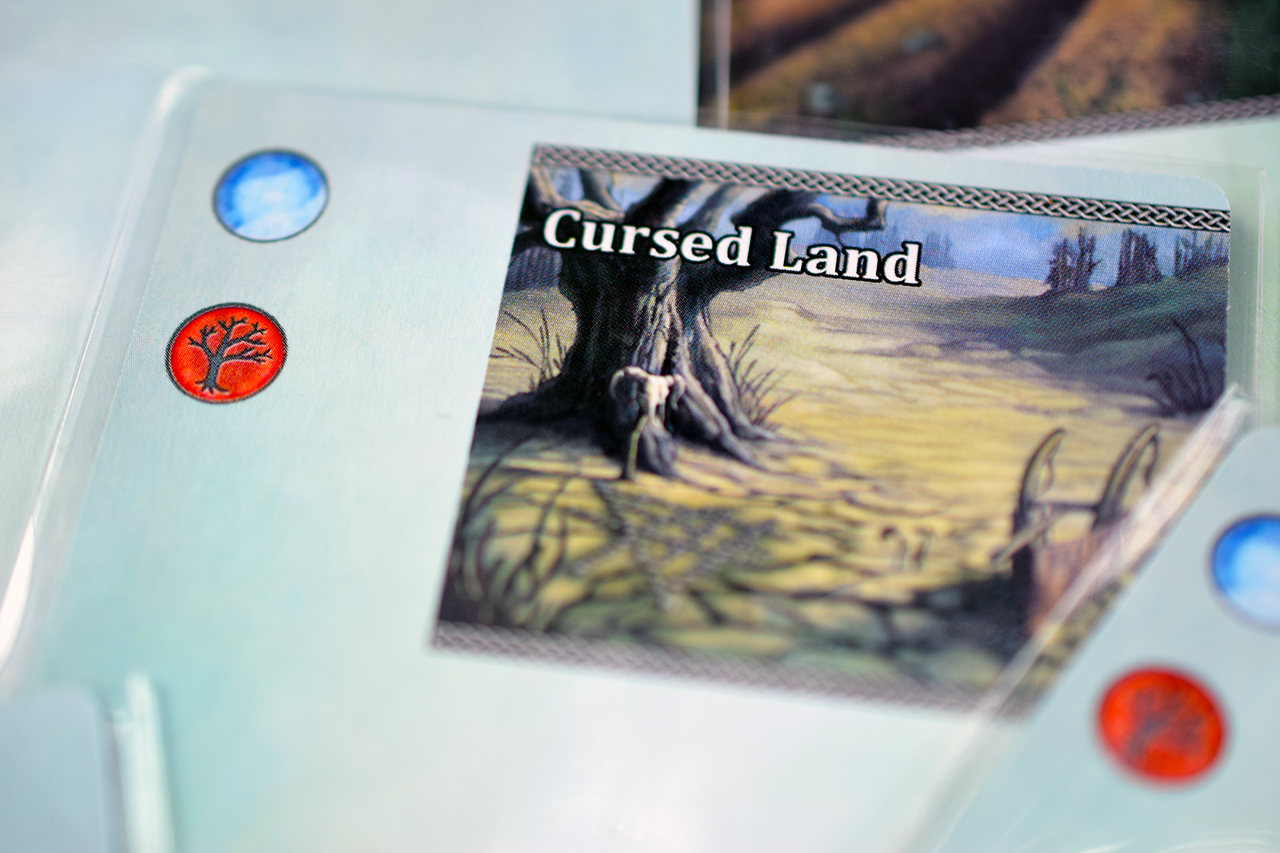 Still, it can be tough to evaluate Mystic Vale knowing that it is a seed for something greater. As a stand-alone title, Mystic Vale offers enjoyable gameplay and a unique experience, but one that is far from perennial. It begs for a bit more after only a handful of plays and, while it has never been unenjoyable, it has begun to lose its luster, especially when considering the wealth of games it’s competing with in this category. I just want it to ramp up a bit more, to give me more control over my buying options, and to last a little bit longer after I get my engine constructed. Instead, it leans more heavily on the build-up and ends just when things start churning.

On the contrast, however, the Card Crafting System is wholly successful; working seamlessly within this style of game and offering an interesting innovation and satisfying dynamic over how your cards come together. As a “tech-demo” of sorts, Mystic Vale is enjoyable to explore, tinker with, and admire for its ingenuity.

So, while I can happily recommend spending some time with Mystic Vale and think it is an enjoyable experience, it leaves me far more excited for Edge of Darkness, the future John D. Clair title that will include the Card Crafting System as one part of the whole, as opposed to looking forward to more in the Mystic Vale line specifically. 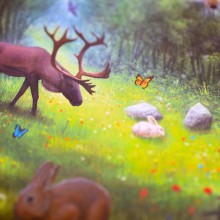 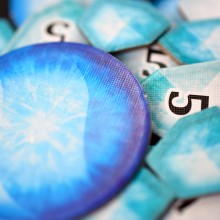 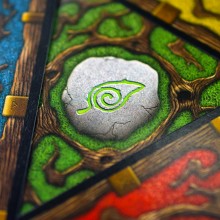 The League of Nonsensical Gamers would like to kindly thank AEG for sending us a copy of Mystic Vale for this review.

I generally enjoy deck-building games and was thus excited to give this one a shot, especially after seeing the cards and how the crafting system works. I think it’s a really nice way to build your deck without just adding more cards to a pile. I appreciate that there are multiple options for gaining points – I’ve played games in which players have collected Vale cards to earn loads of end-game points against others who have upgraded their cards to collect enough in-game points that it is still a very close game. There are plenty of upgrade combinations that play off of each other, allowing you to build solid machines on single cards. The issue here arises in whether the cards that you’d like to pick up become available when they would actually benefit you. I’ve taken to the strategy of building up fewer of my cards, to make them more powerful, leaving blank cards as backups if I’d like to start new ones. Alternatively, I’ve seen spreading out upgrades be equally successful. One thing I really wish I could do, though, is cover up spaces in my cards that I don’t want or need.

Typically, deck-building games provide the option to cull your deck, whereas Mystic Vale neglects to really provide that option. I think that if you could cover parts of the card it would allow you to cull your deck in a way. Mystic Vale is an excellent alternative to a traditional deck-building game, but at the end of the day, that’s still really all that it is. It lacks a greater level of complexity that could make each game different from the one you played before, other than just the fact that you picked up some wolves instead of a Thornhide so your cards were built differently. I can’t wait to see how they build on this game, it has a ton of potential and a lot of room to grow. In the meantime, I’m totally down to play it at game night.

Being a fan of deck-building games, I was pretty intrigued by the idea behind Mystic Vale. The art and design are pretty good and the component quality is high, but the theme feels very disconnected in my opinion. I enjoy games that couple the theme to the mechanics, so that portion fell very flat for me. As I worked through my deck and started building my cards, I found myself paying very little attention to the fantastic art and more and more at the tiny little symbols. In my first play, the card crafting felt very gimmicky and I really didn’t like it. In future plays, however, my mind did change and I started to enjoy it a little more. Working through some interesting card-building strategies can be fun, but it’s all about the build up from the early rounds and how well you can achieve this.

The press your luck element for me is the better element to Mystic Vale, but it can also be extremely frustrating at times, which can be expected with any type of “gambling” mechanism. One thing to note is that as you build the cards, the sleeves get crammed and slightly bloated, so you can kinda see when one of your bigger and better cards are coming up. All in all, this game still does not hold much of my interest. I do like the idea of a card crafting system, but this feels almost half-baked and a stepping stone to something much bigger and better. I would highly recommend a try before you buy.

Admittedly, the very first thing that threw me off my stride was the prohibition on using the purchased inserts to cover up anything previously on the cards. This was a staple in Gloom, and just something that I instinctively thought would be a ‘thing’ when looking at the available cards. After thinking about it, I acknowledged that it was only the presence of the nine Cursed Lands and their associated Decay symbols in your deck was what kept the cycle from becoming a perpetual-motion engine.

As for the game itself, it seems enjoyable enough, but with a nearly-complete lack of interaction between the players, and decks that seemed to cycle a bit too fast during the end game (unlike Ascension or similar games, your actual deck size will never change; the cards themselves just get more powerful, potentially with abilities that allow you to negate Decay and thus draw additional cards without worry), the eventual winner felt like a foregone conclusion at one point.