Your training is now complete. You have learned all there is in the art of harnessing the power of the three elements to aid you in combat. Using the power of fire, water and earth, you feel that no foe is too powerful. You move among the shadows ready for the attack. What’s this? A new enemy has come forth and also harnesses these powers! You must think quickly on your feet and carefully plan your attack! 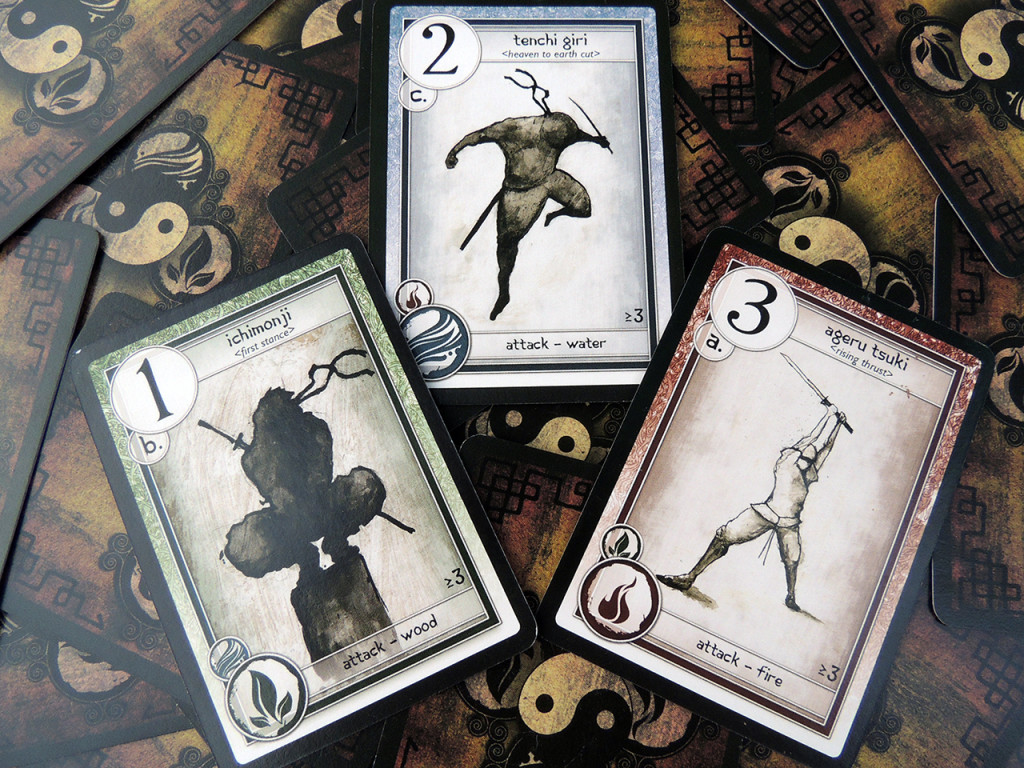 Ironmark Games is throwing their first shuriken at Kickstarter with San, Ni, Ichi (Japanese for Three, Two, One) by Michael “Seddyducati.”  San, Ni, Ichi is a card game for 3-6 players that allows players to take on the role of a ninja warrior entering battle. In this quick trick-taking filler, your goal is to have the fewest cards in your Combat Pile (“damage”) at the end of the game. Damage is acquired by taking tricks that are played on the table. Attack and Weapon cards are thrown into the mix to switch up the cards in play and help prevent and divert damage. The player with the least amount of damage after all cards are played is deemed victorious.

While the cards are of a standard cardstock quality, the Asian-inspired, ink wash graphics are a nice thematic touch. Most of the card design is laid out well and easily understood. However, the Weapon cards left us consulting the rule book on our plays frequently to be sure we were playing them correctly. 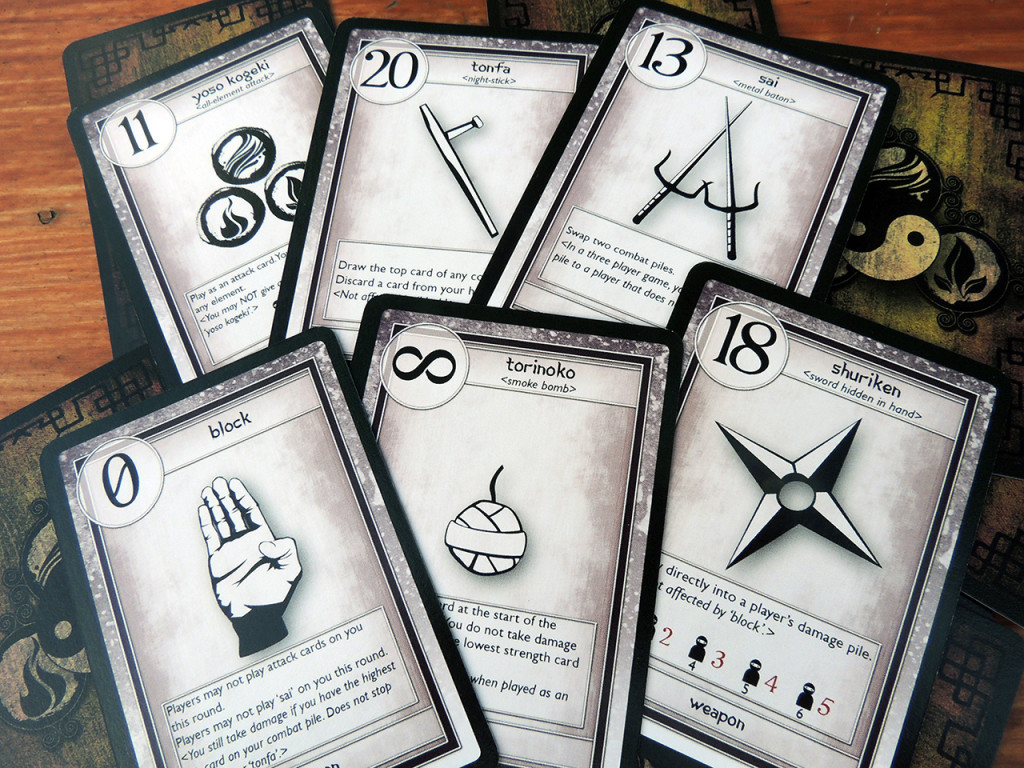 Game play is reminiscent of Rock, Paper, Scissors with three different phases: Selection, Attack, and Damage.  In the Selection phase, players secretly pick a card from their hand and play it face down in front of them horizontally. This way you can distinguish future selected cards from Damage cards that are still in play. The chosen cards are revealed in the Attack phase and resolved from lowest value to highest value, adhering to the power of the elements (i.e. water extinguishes fire, fire burns wood, and wood floats upon water). You do have some strategic options when playing these cards. For example, you can play a card on yourself allowing you to transfer your Combat Pile to another player without a Combat Pile in front of them, or you can decide to discard the card you have chosen. Then, the player with the highest showing card value places all their Combat Pile cards face down in front of them, thereby completing the Damage phase. A new round starts again with the Selection phase and the game continues in this fashion until all cards in-hand are played and all damage is dealt. Players add up their Combat Pile and the player with the least amount of damage is the winner.

As fans of fillers, my nonsensical brethren and sistren gave San, Ni, Ichi a handful of playthroughs but, unfortunately, this one didn’t hit the mark for us. San, Ni, Ichi is very simple and very light—it offers quick games that can be played in just a few minutes. To us though, it fell more on the dull side and lacked the addictive nature of other shorter games. Playing with the hand you’re dealt doesn’t seem to offer a whole lot of strategy and felt very random. You know you want to attack the person with the least damage but you often feel limited in doing that and wind up playing cards wherever they may “fit”. Some of the Weapon cards have cool abilities while others felt pointless. It is, however, very simple and easy to teach. The rulebook is very well done and explains the Special cards in good detail. I do see San, Ni, Ichi appealing to a younger crowd and new gamers alike with its cool theme and quick gameplay. 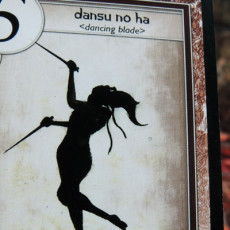 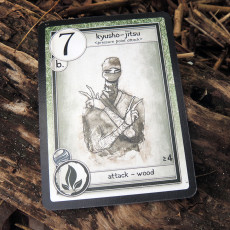 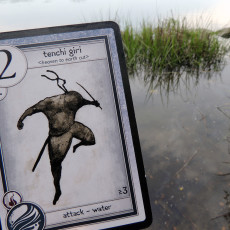 For the most part, San, Ni, Ichi is a solid, little game that was easy to play and teach. The quick gameplay can appeal to most players who enjoy quick filler games. I especially enjoyed the theme and art style. I also like the addition of the elements that offer some bits of strategy to how cards are played. Unfortunately, our first game did not go very well and left a sour taste. We ended up accidentally breaking the game and in the end the whole game became essentially void. Our later plays went smoother and quicker but, unlike a producer on Tabletop, there were times we needed to refer to the rulebook. Overall, I was not as enthusiastic about the game as I had hoped. I do think that this game will appeal to younger players and could get them interested in the gaming hobby.

San, Ni, Ichi was pretty confusing to learn on the first try. I had trouble figuring out which pile meant what and how Weapon cards counted as damage. That being said, it ended up being fairly simple to actually play (not necessarily to play well) and the game went quickly. The art on the game’s website looks like it will be engaging. I enjoy short, filler-type games quite a bit, but this one just didn’t grab me. I agree with Steve that this game could appeal to new or younger gamers with its Rock, Paper, Scissors attacks.

San, Ni, Ichi is a very simple, basic Rock, Paper, Scissors style card game. I think this is the main reason I wasn’t a big fan. The Rock, Paper, Scissors mechanic in games is not my favorite and a lot of times ends up feeling pointless to me, since it becomes a pure guessing game of what everyone else will do. That’s also how I felt with this game and most of the time the card play just seemed meaningless. Overall, the game was lacking for me, personally, and I didn’t enjoy it. I would probably pass on playing it again.

San, Ni , Ichi is a game that succeeds in many ways, except for the most important one – encouraging players to play it again and again. Game results and early rules mistakes aside, San, Ni, Ichi provides neither meaningful decisions during gameplay nor memorable experiences post-gameplay. Though designed well and stylistically appealing, it is a game that can leaves player at prey for disengaged card selection and a regretful roll of the eyes as damage piles are shifted around haphazardly or entire turns are tossed to the discard pile because the appropriate elements were not in place to facilitate a play. Simply put, today’s market is flush with unique and engaging card games that will directly compete with San, Ni, Ichi on the shelf. Unfortunately, in my opinion, those other titles will always win out.

The League of Nonsensical Gamers would like to thank Ironmark Games for kindly providing us with a prototype of San, Ni, Ichi for this preview.

San, Ni, Ichi is currently funding over on Kickstarter. If this game karate chops you right in the sweet spot, head on over to the campaign page by July 24, 2015 to purchase your own copy. For $15 you will receive a full copy of the game and any stretch goals that have been reached.