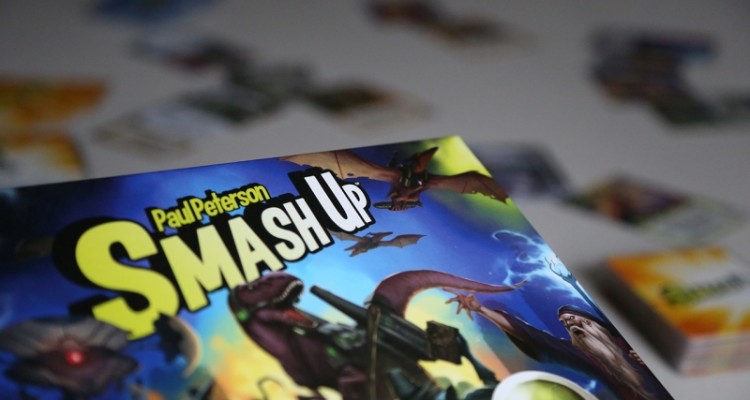 Your goal is to take command of bases and strongholds in a universe in chaos. To expand your influence you must employ armies of unlikely combinations. Will you couple hordes of zombies with technologically enhanced dinosaurs? Or will you pair ninja and pirate forces to stealthily get that booty? The more troops you deploy the more bases you’ll control. The more bases you control, the closer you are to ultimate power and victory!

Smash Up is a quick-paced hand management style card game, for two to four players, which allows each player to create a hodgepodge team of monsters and heroes in order to capture bases and gather points toward victory.

The game was designed by Paul Peterson (Guillotine, Pathfinder Adventure Card Game: Rise of the Runelords), and published by AEG (Alderac Entertainment Group; Agent Hunter, Cheaty Mages, Love Letter, Tempest, Trains). There’s not really a cohesive theme to it, unless you count cramming pieces of other themes together.d

The core set of cards contains eight faction decks and a deck of bases. The faction decks include minion cards and action cards. The factions in the core set are aliens, dinosaurs, ninjas, pirates, robots, tricksters (like leprechauns and things), wizards, and zombies. Each faction has its own tactic, designed to give some advantage. I won’t go into them in detail, but gameplay quickly allows you to discover what each faction does best. 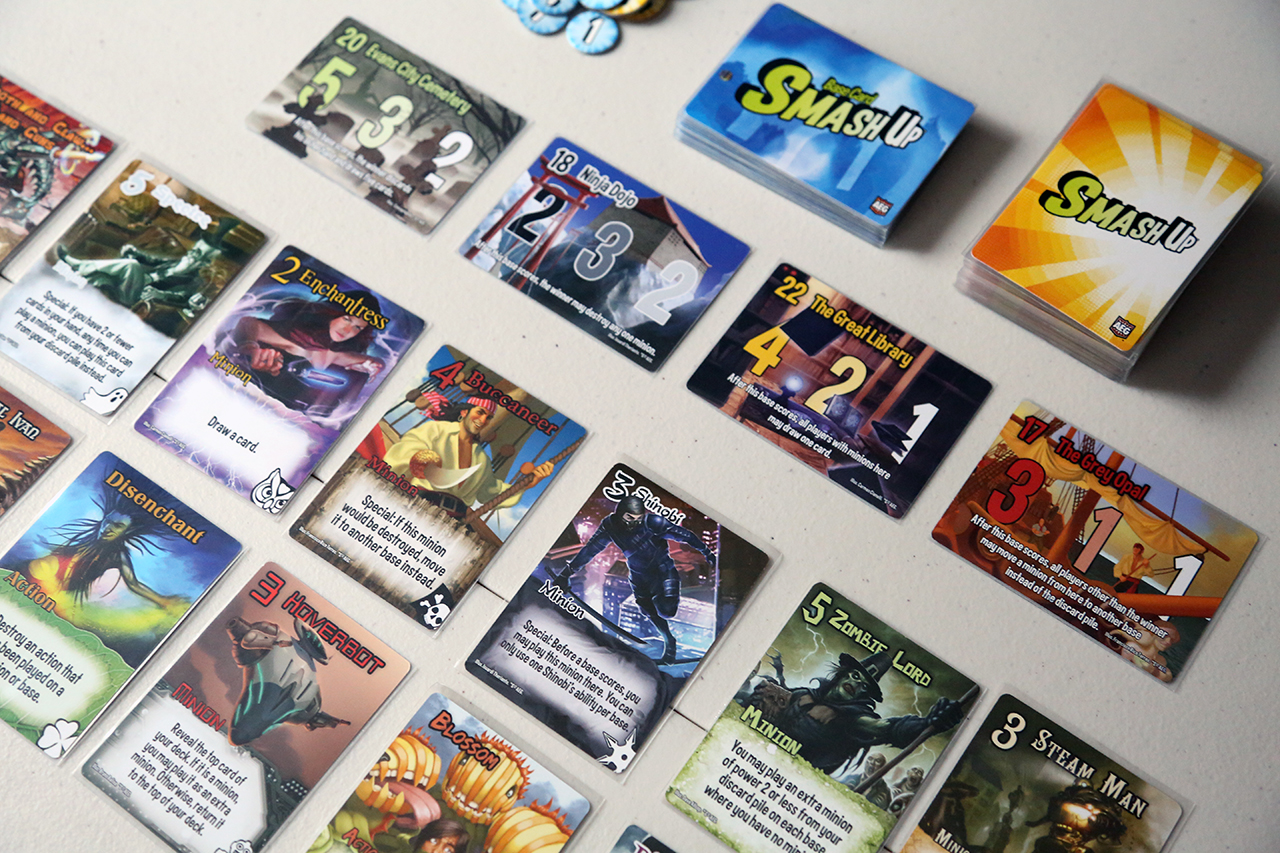 The cards have graphic depictions of the minions or actions. The art isn’t mind-blowing, but they’re solid illustrations that help to differentiate cards when you’re playing them on the bases.

The game doesn’t require a board of any kind, however it can take up quite a bit of table space, especially when you’re playing with more people. It’s a simple game, that is easily portable (since all you need are the cards), but it’s not as easy to play anywhere, like Agent Hunter, for example.

There are three expansions currently available that provide more factions to make wilder combinations than you could imagine: bear cavalry, Cthulhu cultists, elder things, ghosts, Innsmouth, killer plants, Miskatonic University, and steampunks. Having more factions also allows you to add players; if that’s something you’re into.

The object is to capture bases, using your own faction decks, to gain victory points. The first player to reach fifteen victory points wins the game!

Each player chooses two faction decks; my personal favorite is zombie-robots, because I generally kill it with their combined mechanics. Choosing the most effective combination requires some familiarity with what each faction can do (again, you pick it up quickly); however, drafting and/or randomly selecting factions (which is how we do it a lot of times to add variety) can easily throw a wrench in your plan of creating a super-duo. Once everyone has two factions, each player shuffles their two decks together to create one play deck (please pile shuffle, folks; preserve your cards). From your play deck, draw five cards – this is your hand.

Shuffle the deck of bases and lay out a number of bases equal to the number of players you have plus one (for example, three players uses four bases). Leave space between them on your table so that everyone is able to play their cards. 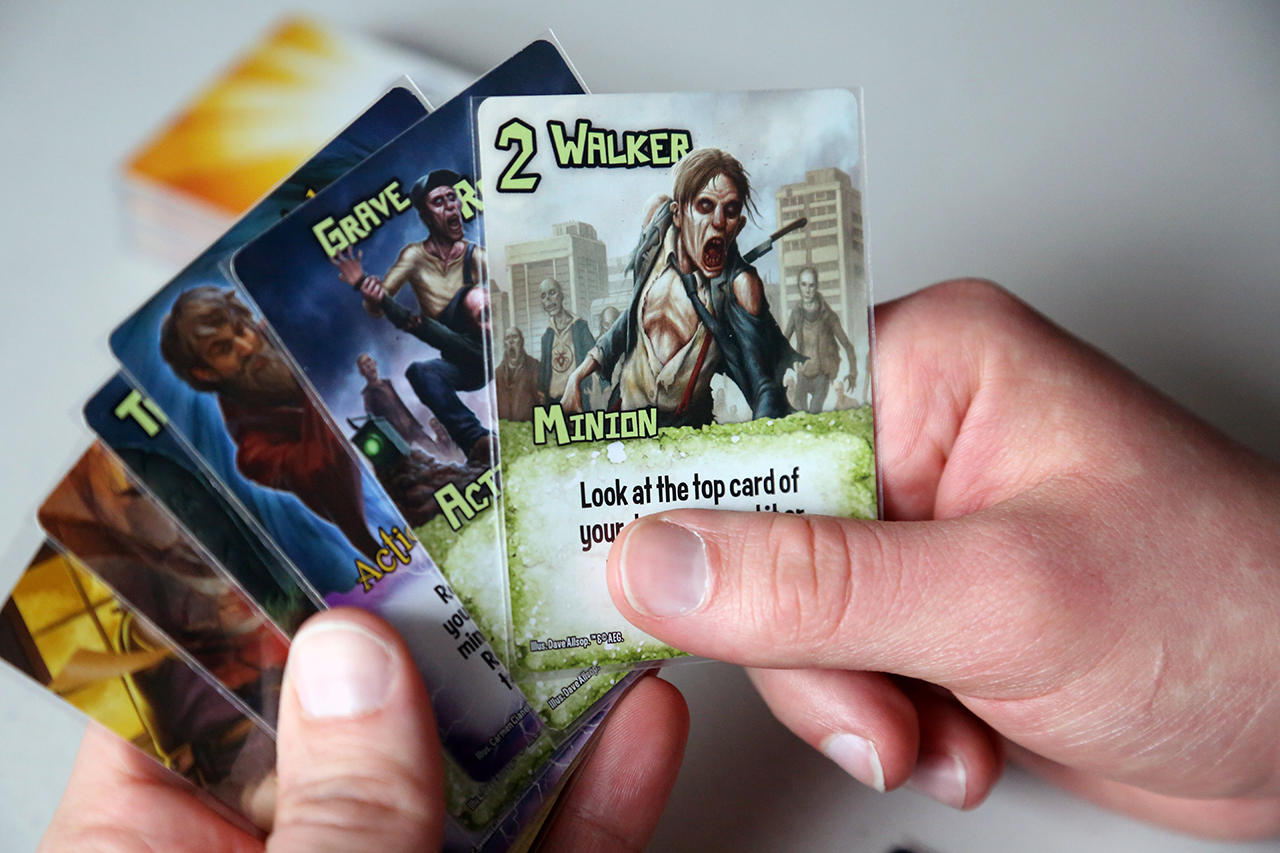 There are two types of cards in each faction: actions and minions. Each minion has its own ability. These abilities can be one-time-only or ongoing. To figure out your minion’s ability, simply read the card. Each minion also has a power. This power is the number of points it contributes toward scoring a base.

Likewise, each action’s ability is explained on the card and, again, can be one-time-only or ongoing. Unlike minion cards, though, actions do not have a power value, so they won’t contribute directly to scoring bases.

Finally, each base has its own ability. Some of these abilities are ongoing, some of them take place when you score (I’ll get to that).

On your turn, you can do a few things:

Card abilities include: being able to play more actions or minions, eliminate others’ actions or minions, and boost the powers of those minions already in play. In order to keep things a little more organized, we usually assign a corner of the bases to each player. That way it’s easy to separate whose minions belong to whom and access their abilities. 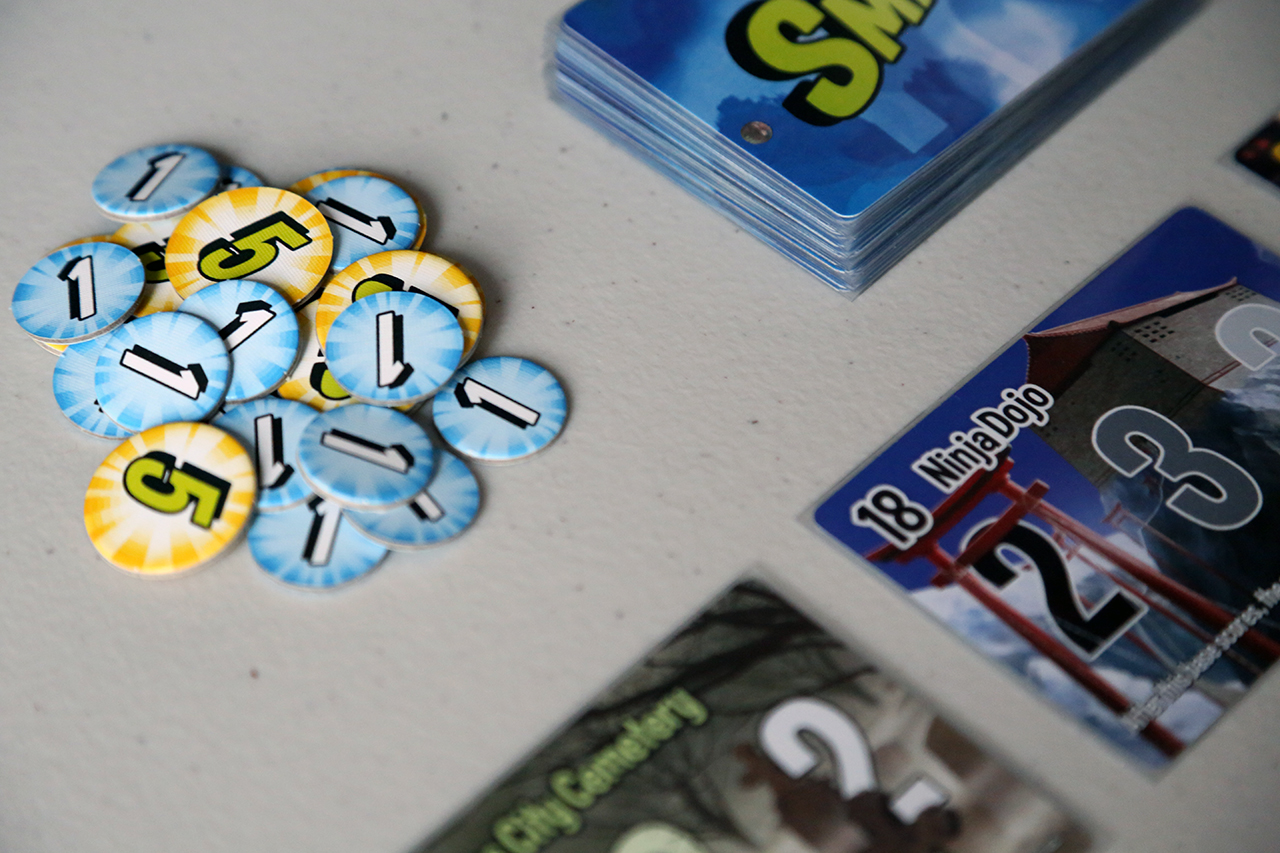 After you’ve played your cards, you will check the bases to see if any of them are ready to be scored. Each base has a “break point” in the top left corner of the card. In order to determine whether a base has met its break point, you add the powers of all of the minions on the base; including any boosts that might be present (some of the dinosaurs have the ability to give an extra point to each minion on a base when it is not that player’s turn, for example). If the total minion power is equal to or greater than the break point, that base scores.

After everyone has earned their victory points, the base is discarded and the next base from the shuffled deck is put into play.  Everyone’s minions are placed into their discard pile after the base is scored. If multiple bases reach their break point at the end of the same turn, score other bases in the same manner until they’re all finished.

After scoring and placing new bases, the player whose turn it is draws two cards. If you’ve chosen not to play minions or actions on your turn, you still get to do this. The maximum number of cards you can have in your hand is ten, though. If you have more than ten cards in your hand after the draw phase, you must discard down to ten before the next player’s turn begins. 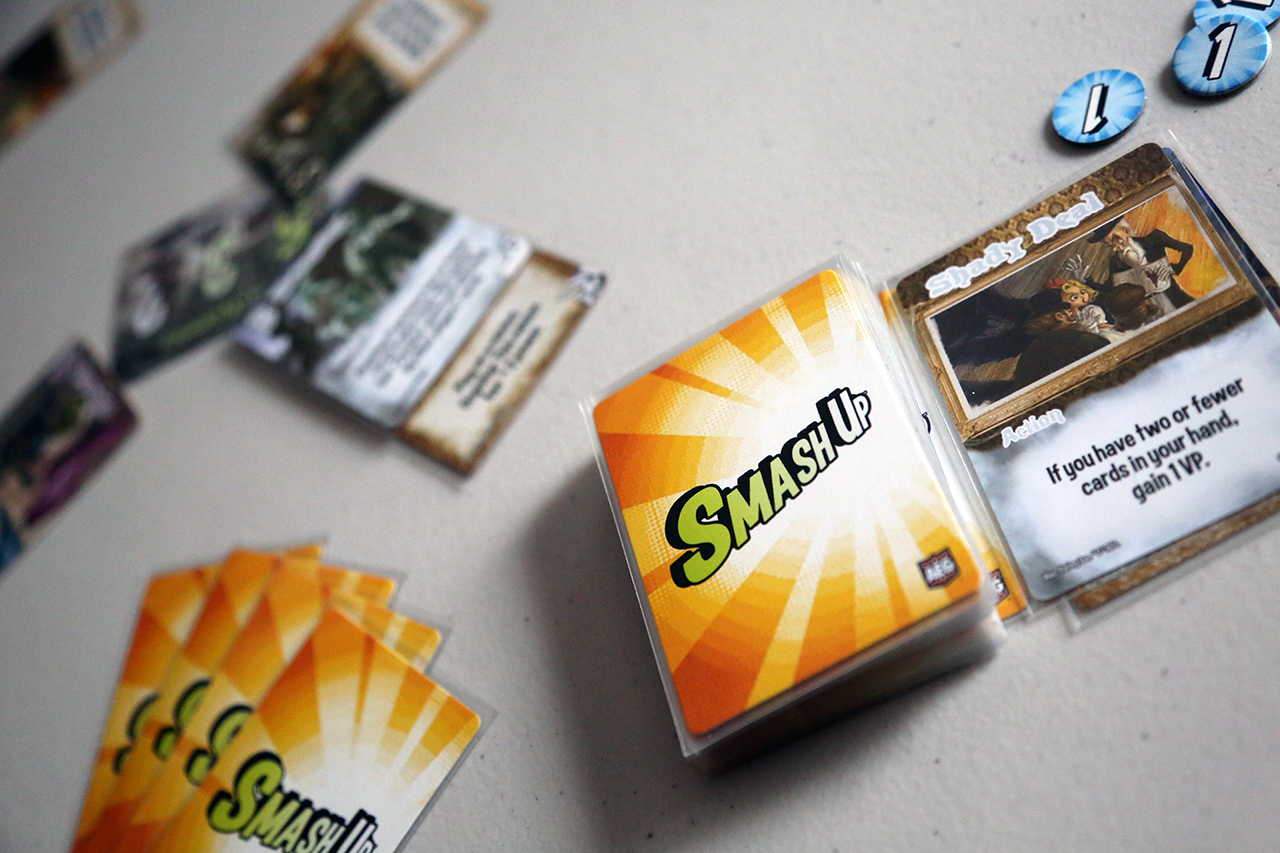 Smash Up is easy to learn and usually a pretty quick play. The text on the card allows one to play without having to memorize minion and action abilities, making it easy to invite new players and teach them the game quickly. Having different combinations of factions each game allows groups to play a different game each time Smash Up comes to the table, too.

Strategy comes into play when deciding which base to play your cards on: you want to ensure you will have a competitive minion power in case a base scores when it isn’t your turn. At the same time, you want to spread your power enough that you won’t be left without minions on the table if a base scores. The various abilities on your cards also allow you to foil your opponents’ plans, creating another layer of offense to the competition.

This game has proven to be a viable option for two, three and four players, although playing with more people usually lends to a more exciting game. The more players you have, the faster bases can score, forcing a player to allocate their powers differently. Having more players also creates a wider variety of faction combinations.

This is one of my favorite games. I really enjoy the competition element and the ability to gain victory points at various levels (first, second and third place) when scoring. You don’t necessarily lose if you’re not the top scorer on a base (in fact the ninja bases give more points to the second place player). This game appeals to my competitive nature and it’s one that I’ve come to be fairly good at, which means I like it even more (naturally). The weird combinations keep it fun and since we play with random faction assignment, you never really know what’s going to happen. I like playing this one with just Buns, or in a larger group. I appreciate that it has a relatively short playtime, too, so you don’t have to worry about needing breaks or losing interest. Plus it’s over quickly if you’re not doing so well, eliminating any suffering.

Similar to it’s theme, Smash Up is, in itself, a smash-up. It’s some strange combined party-filler-gateway-strategy game that hits on as many game play preferences as it has factions. It’s quick to play and has a fairly straight-forward set of rules, but it rewards chaining cards together and strategic placement of minions and timing of actions. This makes it a versatile experience – one that can be played fast and loose or slow and strategic, depending on the group preferences. The most appealing part of Smash Up is its theme(s). No matter what you like, there’s a faction for you. The variety creates mass appeal and also introduces interesting options for choosing your combination (we prefer completely random).

While the game has a lot of good qualities, there are a few things to consider. This game is playable with two, but it is hardly at its best. A lot of the chaos and randomness that this game is based on is lost in a two-player game. Additionally, play time increases noticeably with less people, as the “break point” for the bases don’t scale. A 25-point base could be scored in one round of a 4-5 player game, while it could take several turns with less. Overall, this is an excellent game with the right group, particularly one that wants to minimize downtime and fully embrace the chaos of the game.