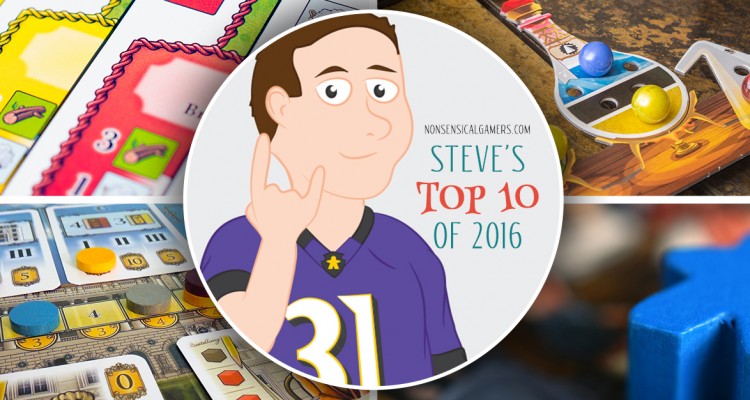 Any game that brandishes the Holmes title could cause one to expect a deep game full of mystery and deduction; this game, unfortunately for some, is far from that assumption. Holmes, however, focuses more on the brothers’ head-to-head battle of the minds in a more abstract way. Although there may be some deduction required as evidenced by the hidden clues that you and your opponent only reveal at the end of the case, the rest of the game is a very straight-forward style of worker-placement and set collection. I very much enjoy this game and I would place Holmes: Sherlock and Mycroft on my shelf right next to other great two player titles, such as Trambahn and Targi.

Check out our Holmes: Sherlock and Mycroft Review!

Iki feels so much like a Feld title; so many possible ways to score points and bonuses and you’re constrained to only a limited number of actions. The choices to make each round are always interesting and really fun. Placing your peddlers in the market allows you to entice other players to visit them, so they may gain experience and retire for end game points, while the center rondel offers a nice movement mechanic and offers many strategic options. Oh, and all of your stalls have the potential to catch on fire and burn down!

Almost everyone has played Bejeweled (or one of its many clones) and players can quickly grasp the core mechanics of the ingredient dispenser. This, of course, is the most fun part of the game, trying to find that perfect move to give you a bunch of explosions. Even if you don’t need the colors, chaining together a bunch of ingredients is extremely fun and satisfying. The potion-making and set-collecting adds a layer of strategy that is very easy to swallow for players of all levels. Mixing and completing potions to then gain bonus powers to extend your turn is really where the game hinges in the competitiveness of the game. There is a very small element of “take that” in one of the potion powers but you can easily exclude that from your plays if you want it to be a friendly experience.

Check out our Potion Explosion Review!

A family/party game for all ages that I would describe, in general, as reverse Jenga. This is such a great and fun game and the different game modes keeps things fresh and lots of fun. With the use of a deck of cards that dictate the different colored pieces that can be played in the different modes, along with the big chunky wooden pieces, offers a fantastic experience. Some game modes require some group co-operation and other modes will rely on speed and height of your Junk (that’s what she said). Always a hit with every type of gamer with a high replay-ability.

The hype train was really clocking in some overtime this year once Scythe was announced on kickstarter. The gameplay was almost nothing what I expected it to be, a sprawling, campaign driven war game with epic battles and unlikely alliances. While the game can offer that experience, it is not the focus. Scythe rewards you with victory points for everything you accomplish, with pacing and timing being the key on when to achieve your goals. Whether it’s building mechs, gathering resources or just expanding your grasp on the land, any path can lead you to victory. I really enjoyed the theme and artwork and the originality of the game’s setting. I was never hyped for this release but I was pleasantly surprised by Scythe.

About to go down… pic.twitter.com/JUMZ1w7YHW

A sleeper hit from Haba games that is so simple in execution, yet so brilliant.  Players use identical player board setups and tiles to try to get each explorer through the jungle to their respective temples before your opponents. This tile laying race is very simple to teach and play that you will find yourself playing 2 or 3 games in 30 minutes. It is always fun to see how each player used their tiles in different ways at the end of the game. I was hoping that Karuba would be able to pull of the SDJ win this year. It certainly deserved it.

This submarine simulator, in board game form, will have two teams up to four players duking it out under the sea. Each team member uses a dry erase board that contains a specific station and work together to locate and destroy the opposing team. The captain drives the sub and makes final decisions, the engineer makes sure things are always in working order, special ops deploys weapons and surveillance drones, and the radio operator is trying to gain information to locate the enemy sub. Captain Sonar is loads of fun and offers a ton of replay-ability.

Oh My Goods! is this game fun! This game packs a big box euro experience into a deck of cards. You are always having such in internal struggle on deciding on whether to work orderly or sloppy. This decision really can change how the current round can go  for you which can also turn some gamers off due to the randomness. To me, however, this element of press your luck is the best part of the game. Everyone I have introduced this game to has loved it. I think the multi-use cards are great but can be a little confusing to new and casual gamers. I am always willing to play this fantastic game.

Check out our Oh My Goods Review!

Grand Austria Hotel offers an exceptional experience, wrapped in an initially boring sounding theme. The game has a lot of blended mechanics and moving parts that really scratches my strategy gaming itch. Once the dice are rolled your wheels will start to spin, trying to find the most efficient action available to you. The most unfortunate aspect is the down time in between turns. There will be lots of statements like “Is it my turn?” or “are you done yet!?” or even “Zzzzzzzz…”. Positioning yourself to pull off a great combo will have you feeling extremely satisfied as you hear the groans from your opponents (from behind their phones, probably).

Wooooo doggy! When I first saw photos of this game, I knew it was going to be something special. A great game that has a great blend of different mechanics that really butters my biscuits! A little bit of deck building, worker placement and press your luck just to name a few. The strategy I went with on my first play was an astronomical failure but I still loved every second. Turns are quick and the game always moves along so smoothly that the lengthy gameplay time goes by without notice. My only gripe with this game is the backwards use of the money symbols but otherwise, a very beautiful and fun experience.