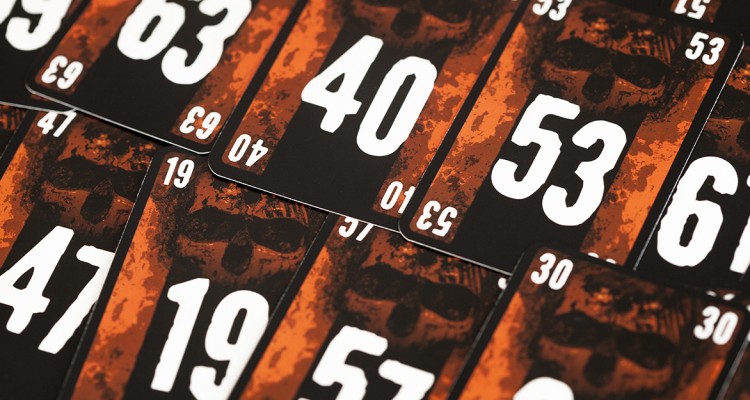 As reviewers, podcasters and content creators, it is our job to venture into the murky outskirts of the hobby and give a fair and unbiased take on every game we come across. In the case of this review, that credo includes the unfortunately named “The Game,” a 1 to 5 player abstract cooperative card game from designer Steffen Benndorf. Aside from being so poorly (or maybe well…) named that not even the CIA could track it down on the internet, The Game boasts a recent accolade as a Spiel des Jahres nominee,  meaning that no matter how silly the title or how ominous the Saw-like skull on the box cover, The Game deserves a deeper level of consideration. 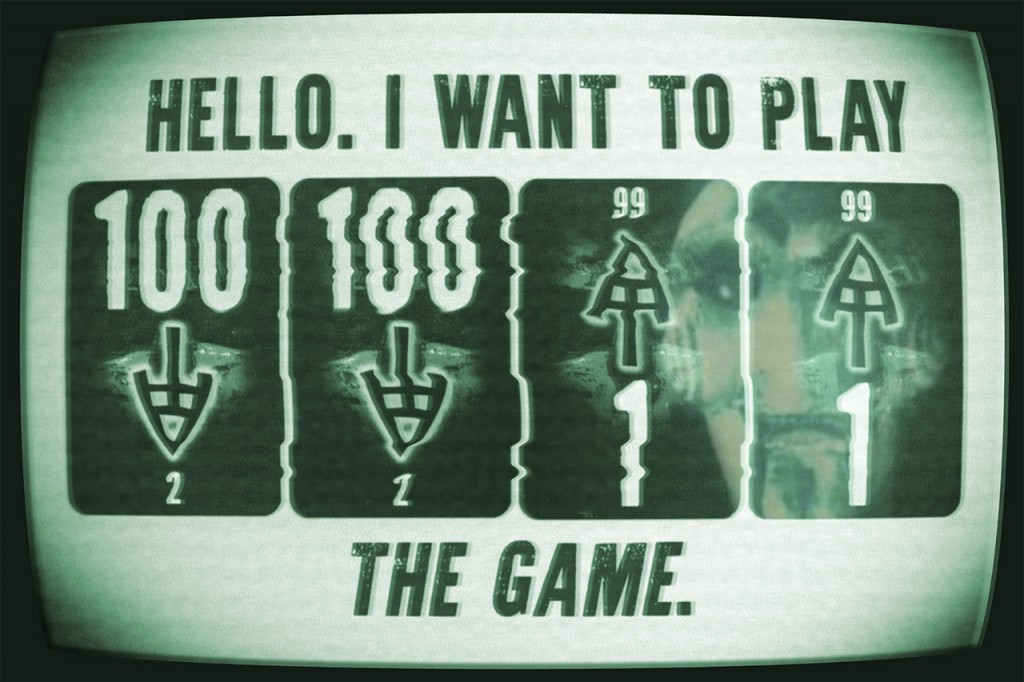 In The Game, you take on the challenge of working through a deck of 98 cards, numbered 2 through 99, by playing cards to four available piles, two descending and two ascending. Cards do not have to be played consecutively, but you must play at least two cards per turn before drawing back up to a hand of six. While you do not have to play cards in exact order, the end-goal is to rid the deck of all 98 cards, so it behooves you to make as small a jump as possible each turn. The only reprieve from a potentially awful hand of cards is the ability to play backwards with a card that is exactly 10 more or less, depending on if the pile is counting up or counting down. If you can manage that feat, either solo or with a group of friends, congratulations! You get to…live? I think that’s how Saw, er-, The Game, works…

When looking at an award like the Spiel des Jahres, it is difficult to nail down exactly what the committee will nominate and ultimately vote for. In general though, it is a safe bet to consider light and medium-weight euro games with straightforward rules that host a family of varying ages happily. With that in mind, it makes sense that The Game would be held up against successful titles like Hanabi, Camel Up, Thurn and Taxis and Carcassone. Except, no it doesn’t. Sure, The Game can be set up and taught in five quick sentences and played in about 20 minutes. But, that a good game does not make. 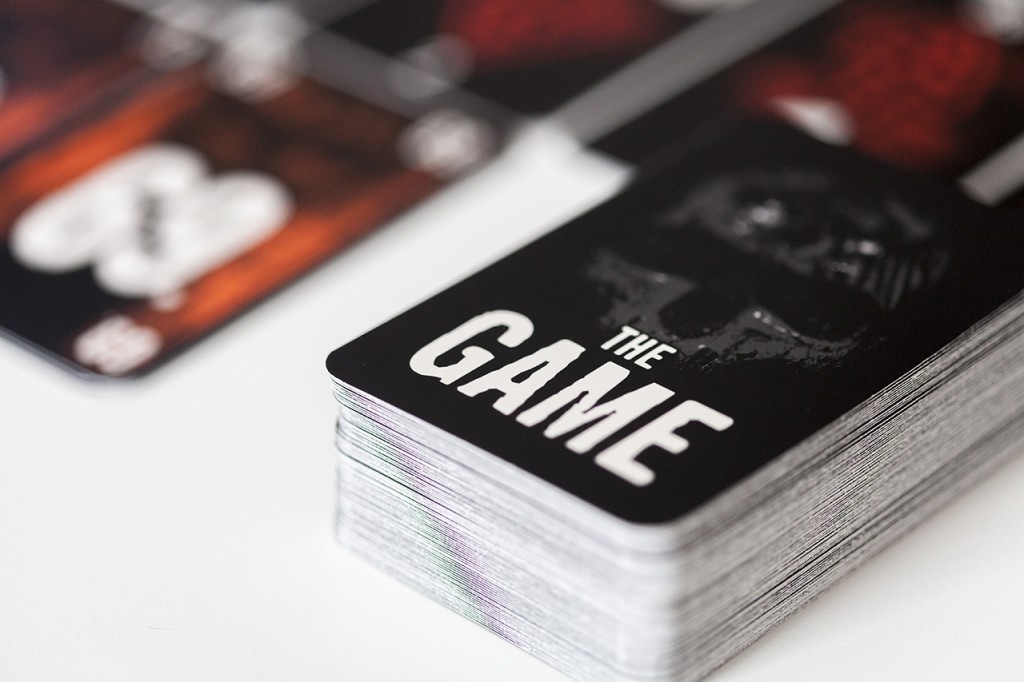 Looking past the fact that The Game is devoid of any semblance of a theme, you’ll find that it is equally devoid of any meaningful cooperation. In a game that thrives on working together, you are provided no way to effectively do just that. By writing in rules that restrict communication, without providing a clever substitute or twist, The Game artificially creates difficulty by simply taking things away from you. Of course things get harder when you take away the tools needed to accomplish a task, but what makes that challenge engaging and fun is when you are then provided some other option, seen or hidden, to navigate the situation. Instead of feeling that tension of having to cleverly get your point across, The Game forces you into that awkward corner of the cooperative market where players constantly preface their moves with “I’m not sure I’m allowed to say this but…” In each of our few successes with The Game, someone was able to identify an edge-case or slip-up where too much was said or a “co-op cheat” was committed.

In the end, The Game simply doesn’t justify itself. With a price tag equal to many quality fillers on the market, it doesn’t provide a thematic experience or an engaging design that lasts beyond the initial novelty. You’ll probably find plenty of people willing to sit down and try The Game, whether because of its silly name, the odd cover art, or because of the community chatter surrounding it, but it doesn’t have the staying power to stand the test of time. 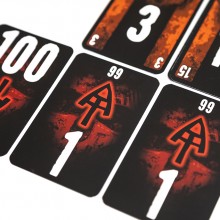 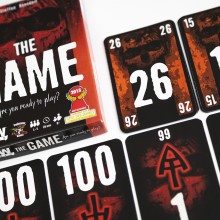 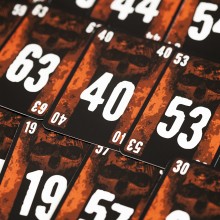 I am still not sure what exactly to think of The Game. I didn’t hate it, but I also wouldn’t say it was award-winning material. It’s a very simple game that has minimal rules to teach and is easy to play. Game play is quick and that can appeal to just about any filler gamer. However, The Game offers no theme nor any interesting decisions. As you play, you find yourself offering apologies rather than meaningful team related communications. In the end, The Game was just that, a game. A shrug of the shoulders after you see how badly you lost and you will move on to another game. I would search out Hanabi for a better cooperative card gaming experience.

It wasn’t until Biff said it that I pinned down what The Game reminded me of: Rack-O. I used to play it over and over with my grandmother and cousins growing up. It was one of my favorite things. The Game takes a similar objective of putting cards in order and takes out the competition and some of the flexibility. I enjoyed The Game in that I liked trying to puzzle out how we would each play 2 cards without screwing each other over, but it ultimately was most engaging when we were trying to come up with ways to communicate what we could play without explicitly saying “I have the 67, don’t play on that pile!” In the end, we created other ways to essentially communicate increments of ten and then divide them up. Unfortunately, our methods probably bordered on breaking the rules. I can see the appeal of this game for kids who are working on counting and number order, but at the end of the day, there are many games with which I could fill the time that this one utilizes for play. I will say, though, that the endless Saw references were my favorite part of playing The Game.

Being nominated for the prestigious Spiel des Jahres, The Game has been on my radar since the summer. With an awfully unsearchable title, and even worse artwork, I was willing to look past these poor choices to explore just what this game had to offer in hopes that the old “never judge a book by its cover” adage applied here. Turns out, it does not. Akin to games such as Solitaire and S.O.S. Titanic, The Game is an activity best played solo. After four plays, I found myself uninterested and eager to move onto something new. Fans of solo games will likely find enjoyment in the quick puzzle set out on the table; however, as a cooperative game I felt it lacked the engaging teamwork found in other small box card games such as Hanabi.