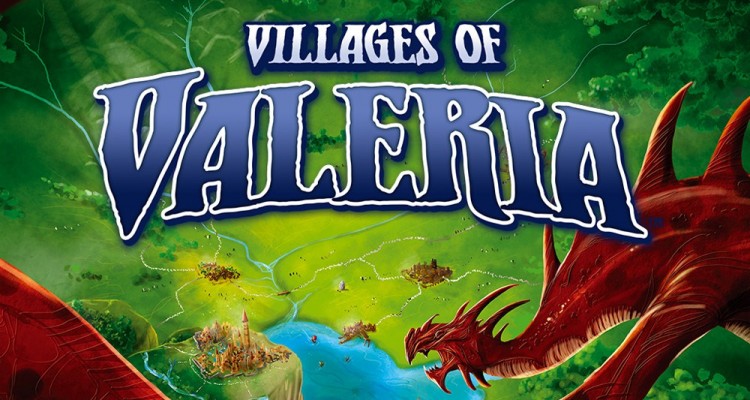 Villages of Valeria, a tableau-building card game from designers Isaias Vallejo & Rick Holzgrafe and Daily Magic Games, transports players back to Mihajilo Dimitrievski’s beautifully illustrated fantasy kingdom of Valeria in the role of a Duke striving to surround his castle with a bountiful village. Comprised of unique buildings that provide victory points along with powers or benefits to certain actions, and maybe even inhabited by a powerful adventurer or two, the most magnificent village at the end of the game will become the the Capital City of Valeria! 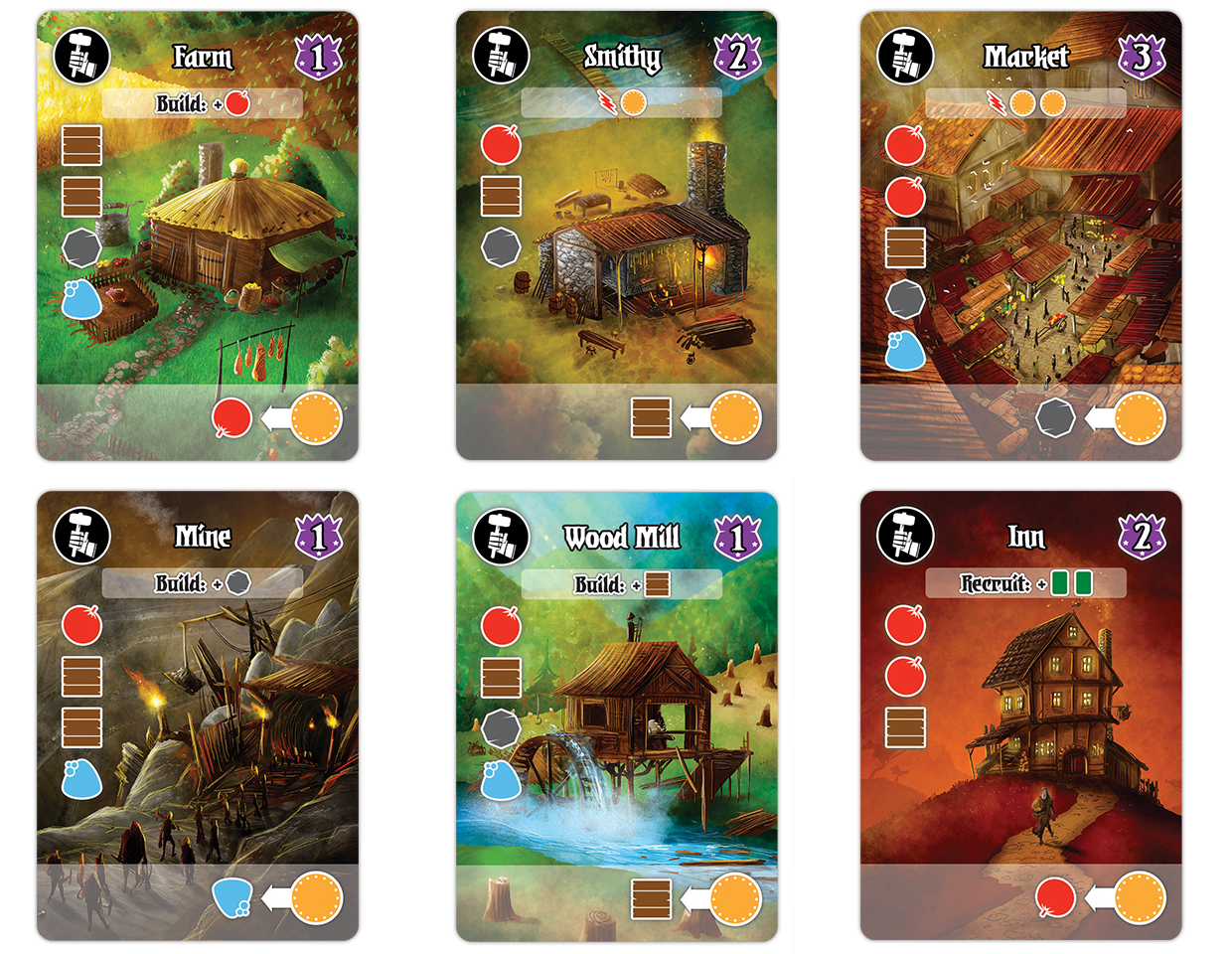 Pardon My Friend, the Village is that Way

As mentioned, Villages of Valeria has two main types of cards, buildings that you can add to your village, or adventurers that you can woo. Now, you might be wondering, where do the resources come from in order to build these structures? Well, each building card has a specific type of resource listed at the bottom, and may be played in one of two functions:

There are four resource types in the game: wood, stone, food and magic. When paying the cost for your buildings, you may use the resources that you have developed by placing a gold coin on the resource, or you may pay 1 coin to an opponent to use one of their resources. While coins placed on your castle’s resources return during the Replenish phase of your next turn, gold given to opponents remain with that player as payment. Similar to a game like 7 Wonders, this allows you to specialize in a couple of the resource types, knowing that you may be able to use those that your opponents have collected to your advantage. While you can certainly diversify, the pace of the game and the rising cost of buildings will likely have you reaching across the table for help at some point, so you must balance your own needs against just how much you’ll be helping your opponents. As the productivity of your village is directly linked to your gold supply, you not only have to be mindful of the type and amount of resources your castle has available for production, but you must ensure that you retain a reliable reserve to tap those resources.

Buildings come in one of four categories: soldier, worker, holy, or shadow. These distinctions are important, as some cards will work in better in tandem with other cards of a specific type, granting more efficient actions / bonuses or victory points. These building types will also serve to lure adventurers that are looking for a particular requirement to your village.

The turn structure in Villages of Valeria is simple with the provided player aid serving as the only necessary point of reference after one or two games. On your turn, you will replenish by returning all gold coins from your resource cards to your supply. Following the replenish phase, you will choose one action to complete. Like its predecessor, Valeria: Card Kingdoms, after you have completed your action, each other player in clockwise order will have the chance to optionally follow this same action for an increased cost. The five actions you can take on your turn are:

The actions are straightforward and keep the flow smooth even with the possibility of other players following your action. As with most tableau-building games, creating combinations and synergies amongst your cards is paramount to your success. The ability for players to follow each other’s actions keeps the game moving, so acquiring building bonuses for your various actions to increase their effectiveness while following is a must. No turn ever feels wasted in Villages of Valeria, each one more and more crucial in your bid to keep up with your opponents. 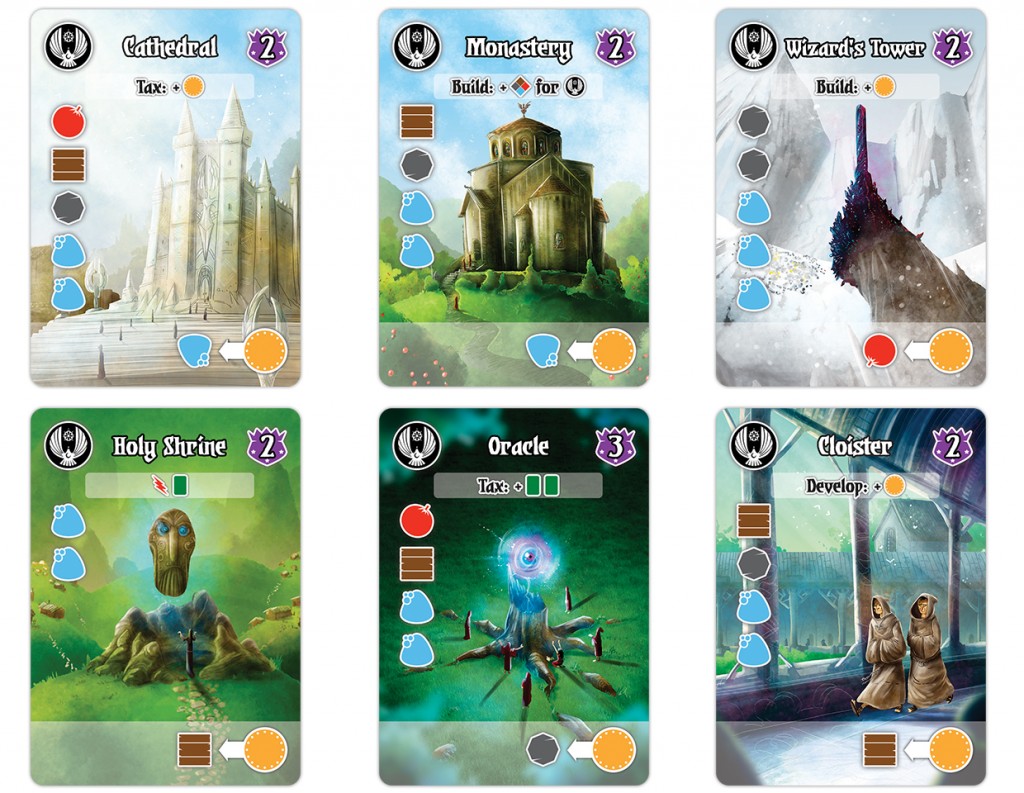 As in Race for the Galaxy and similar titles, the end game is triggered once one player reaches a certain combined threshold of buildings and adventurers, depending on the player count. Once this happens, the rest of the turn is then completed (including all Following Actions) and everyone then tallies their victory points along with those from their buildings and adventurers. The village with the highest total becomes the Capital City of Valeria (a.k.a. the winner)!

Daily Magic is quickly making a name for themselves with a number of recent Kickstarter titles that combine excellent component quality and evocative artwork, along with equally interesting and accessible game play. I am extremely fond of small box games that punch above their perceived weight (and price point) and this game is no exception.

Overall, Villages of Valeria is a fast-paced tableau builder that slickly combines familiar elements from games such as Imperial Settlers and Race for the Galaxy into an approachable and easy-to-learn game. Even so, there are many difficult decisions to be made throughout, so do your best to focus and not get distracted by the stunning illustrations. This title is another great addition to the ever-growing fantasy world of Valeria, and I would highly recommend you consider visiting this charming locale. 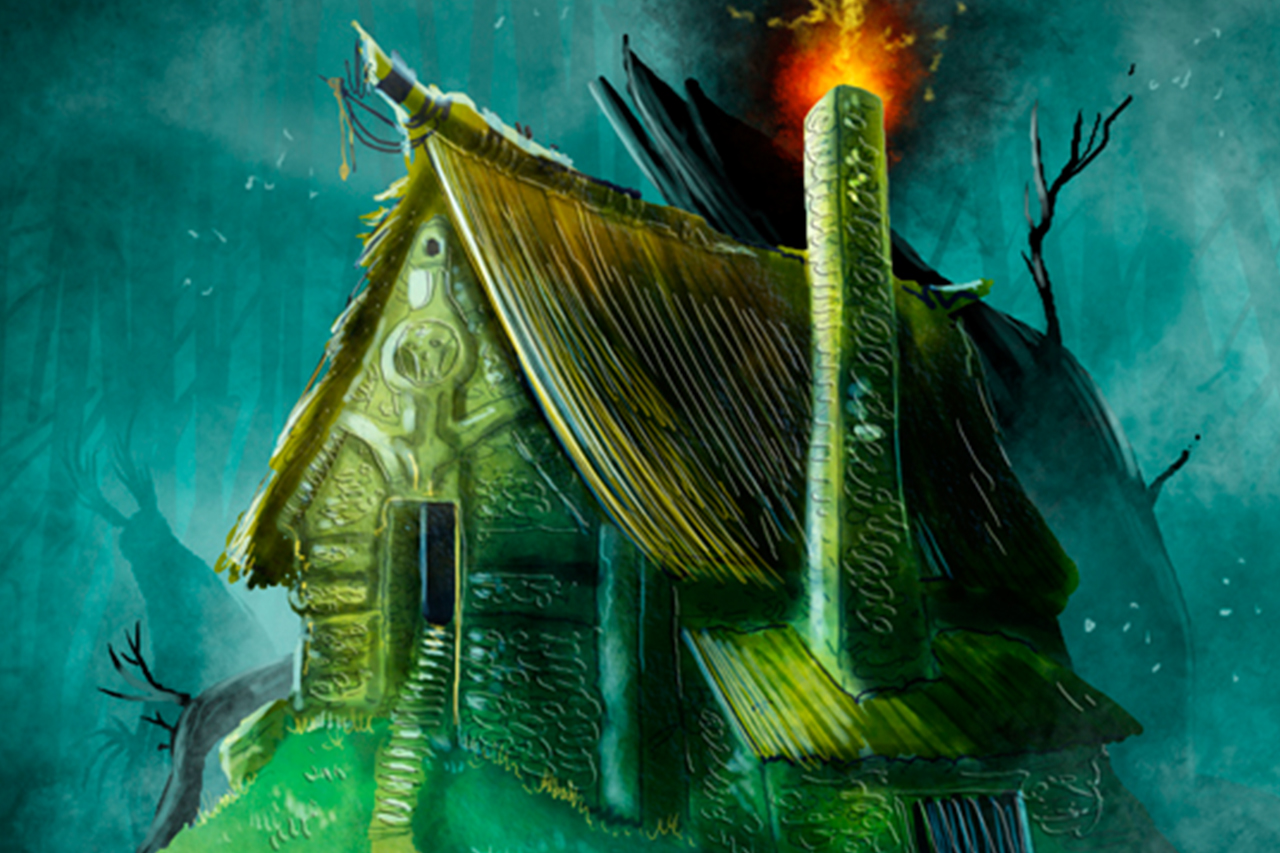 The League of Nonsensical Gamers would like to thank Daily Magic Games for providing us with a prototype copy of Villages of Valeria for this preview. We were not compensated for this preview.

Villages of Valeria is currently funding over on Kickstarter. Head on over to the campaign page to purchase your own copy.