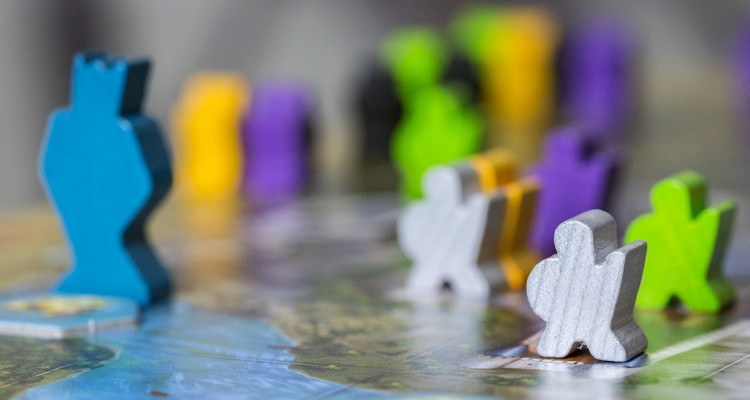 Adventure Land, from the venerable German duo Michael Kiesling and Wolfgang Kramer, is one of three new family-weight titles on offer from HABA. In this light euro-style game you take on the role of brave adventurers navigating the cities, forests and rugged mountains of the kingdom through calculated board movement and area control in an attempt to win the favor of the king.

One of Adventure Land’s strongest characteristics is the versatility it provides for gamers across the age and skill spectrum. In the box are three distinct adventure scenarios for you to choose from, each providing a slightly more challenging puzzle than the previous scenario. It is important to let the other adventurers know what the end game scoring conditions are for the particular scenario you are playing as each one is different and will alter how you play throughout – there will be more on this later. 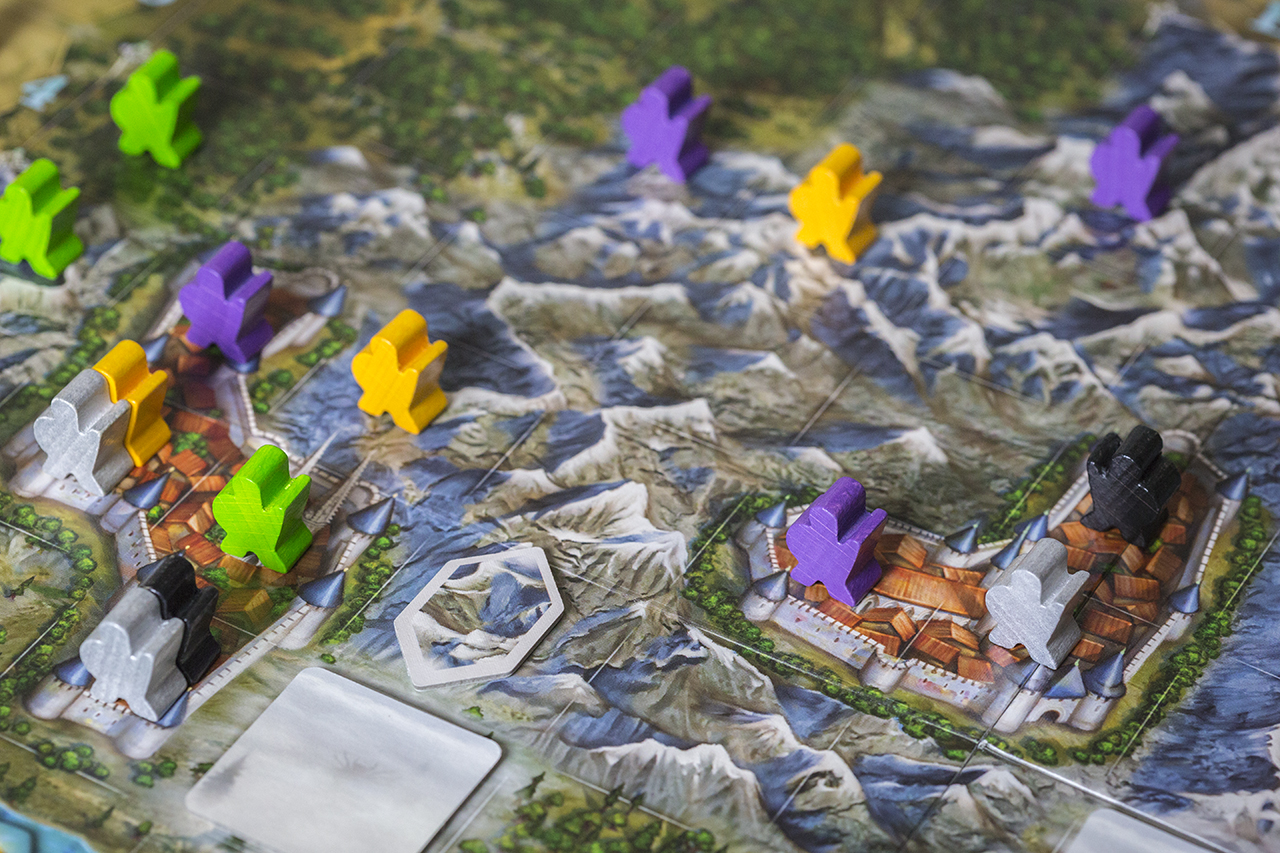 One Page of Rules to Bind Them

As with most HABA games, the turn structure is fairly simply. On your turn you perform the following:

When moving an adventurer you are allowed to move any number of spaces east and/or south (right and down for those not up to speed on their cardinal directions). This limited movement mechanism is the core of the game and sets up an enjoyable spatial puzzle to decipher as your adventurers may never return to the lands from whence they came.

If your adventurer’s move ends on a space that contains an item – swords (mountains), herbs (forests) or gold nuggets (river) – you collect it for your personal supply. These items can be used to aid in your fight against the dreaded fog creatures that occupy the lands. Speaking of which, when your adventurer ends his turn on a space containing a fog creature an epic battle ensues. 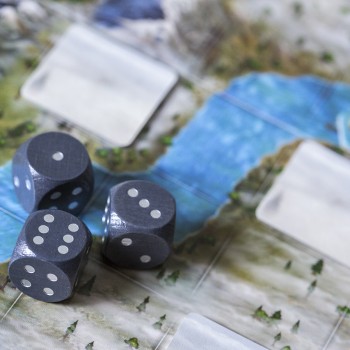 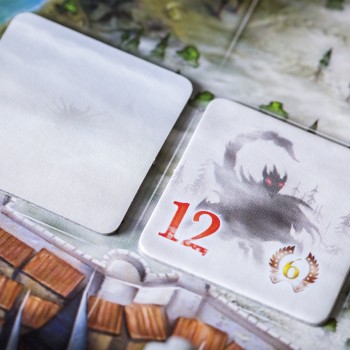 To combat these foul beasts you will need sheer strength, in combination with the items you have collected along your journey, to meet or exceed the fog monster’s strength and defeat it. Your adventurer(s) provide an inherent strength value of “one” to each battle. It is up to you to then decide how many, and which, items you would like to bring to the battle. A sword grants your adventurer a six-sided die which can be rolled and added to your combat strength; an herb can be spent to increase your combat value by one; and gold allows you to reroll one of your sword dice. You can use any number of these items in the battle; however, swords must be spent at the outset of the battle and cannot be increased once the decision has been made and the dice rolled. This simple dice-based combat system provides a small element of tension while still offering players an interesting risk-based decision point – try your luck with the sword or stockpile herbs to pad your result, all the while hoping that the opposing adventurers don’t beat you to the spoils. Or worse yet, have the fog monster defeat you and lose your adventurer(s) for the remainder of the game.

The game continues until the sword and herb piles or card deck is exhausted. As mentioned above, the scenario you are playing will determine how final scoring is calculated. While slaying monsters and collecting gold will benefit you across all three scenarios, the bulk of your victory point total will come from how well you meet the chosen scenario’s special, more thematic, end goal. Scenario One, “The Fellowship,” will reward the number of companions gathered through the game. Scenario Two, “The Magnificent,” awards big points for congregating all of your adventurers in a single location. Even further, Scenario Three, “Escape to the Cities,” directs your attention to the various cities around the board and awards points based on majority control in those areas. Each of these options help to expand the simple game system, challenging you to navigate a unique puzzle each time to come out on top. 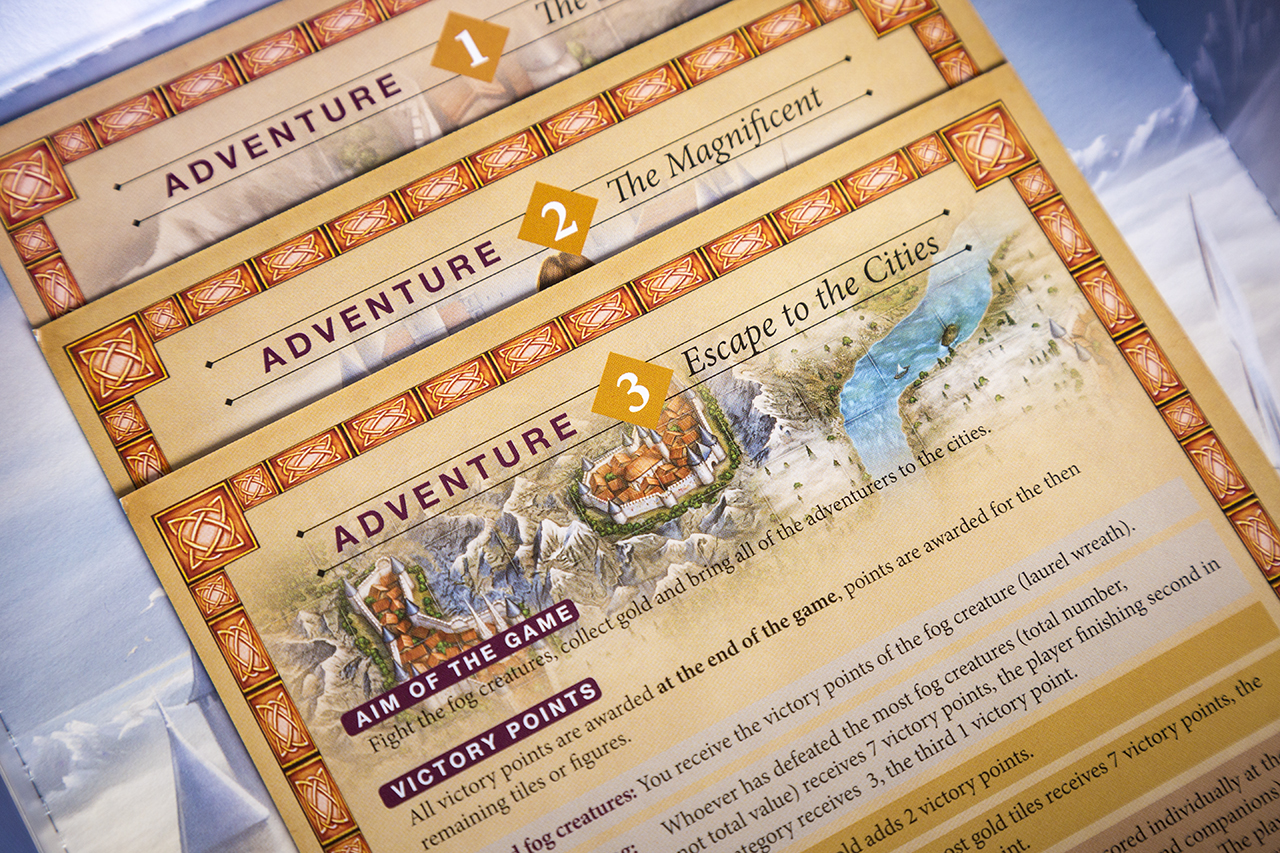 This is the second HABA family game I have had the chance to play (the other being Karuba) and I have been equally impressed with both of them. In my opinion, Adventure Land is the more “complex” and versatile of the two with the three scenarios allowing you to tailor the challenge/experience to your group. The rules have been paired down to essentially one page, making the game easy to understand and teach to a variety of skill levels. The game has an ease and elegance in how its mechanisms interlock, giving it a “classic” or “timeless” feel akin to many of Kramer and Kiesling’s titles.

The theme is loosely tied to adventuring – you’re not going to get an epic feel of questing and battling on the same scale that you would get in a dungeon crawl-style game. Adventure Land is, for the most part, an abstract tactical puzzle with an evolving spatial element. As with all of HABA’s games, the vibrant, well-produced components do give the game a strong visual presence that will certainly appeal to younger gamers and lend a bit to the thematic immersion.

Nevertheless, the experience is satisfying and hits a sweet spot in terms of target audience and complexity. The restricted movement mechanism (my favorite element of the game) mixed with the evolving board state and varied scenarios offers a pleasant puzzle to solve with just enough tactical maneuvering from turn to turn that young and seasoned gamers alike will enjoy their time in the kingdom (Disclaimer: mileage may vary with seasoned gamers due to the lack of strategic depth). In Adventure Land, HABA has again bridged the gap between children’s games and more advanced hobby games, making this one adventure I recommend you embark on with your family or fellowship! 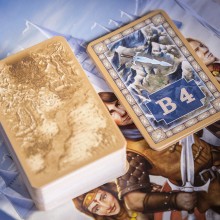 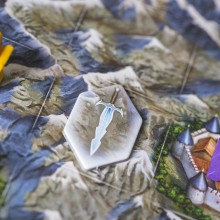 I am really enjoying the games that HABA is offering recently. They offer much more for the family to enjoy and are not necessarily only for  young children. Of course that doesn’t stop us from rocking some Animal Upon Animal or Rhino Hero now and again.

Adventure Land offers a great family game that will appeal to all ages and gamers. Offering some very basic elements that may be found in a big box dungeon crawler with simple and easy to teach rules, it manages to help everyone meet halfway in a brilliant way. The scenarios that I have played offered a lot of strategy and meaningful decisions. I had fun trying to plan out my moves and gather my fellowship as they traversed the board. Should I go slay that monster for some points, go out of my way to see what treasure I will find or take a few more steps to the city to progress the end game? The only downside I can see to this is that even though the scenarios are different, the movement mechanics may make it feel “samey” across each scenario. This can easily be fixed with expansion scenarios or maybe even come up with you own! I really enjoy this one and can easily see this being a hit with any family.

Adventure Land is a shining example of intelligent market expansion for HABA. Moving just slightly away from their large catalogue of child and toddler activities, Adventure Land – and it’s family weight cousin, Karuba – gives families and game to grow into. I particularly like the diversity in the three scenarios, in that they scale the challenge of the game without altering its simple system. As Dan mentioned, it allows you to tailor the experience a few notches up or down without having to establish a new foundation. Also, while it is largely abstract and much more “Euro” than your standard adventure-style game, it does manage to bend the scoring in a way that imparts theme. All around, this title is both a smart design and a smart addition to the HABA line. Adventure Land can be appreciated by a large swath of the gaming community, with family and “lighter” gamers likely getting more longevity from its contents than those preferring something more internally complex.