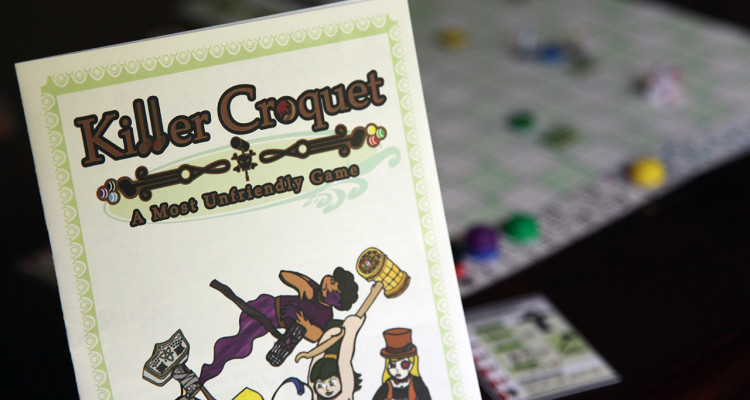 Normally the most civilized of outdoor activities, the sport of croquet takes a dark and unfriendly turn as you and five others, all masters of your respective styles, find yourselves abducted by the terrorist organization of Pall Mall! Forced to fight in the deadly arena of Killer Croquet, you must either complete the course, forward and back, or rack up your score through combat to take the victory. Can you and your trusty mallet survive this tournament to win your freedom?

Killer Croquet is an arena-style game of tactics, planning, and a healthy helping of luck for two to six contestants, designed by Mackenzie Cameron of Inkbrook Games. Players take on the roles of one of six croquet masters, who range from Thor Odinson, to Marianna Maletrov, the ex-Soviet Croquet Super Spy, to Hank Spectre, the half-ghost champion who beat the Devil himself in a round of croquet. Each character has their own unique power, and is tied to a specific player color and turn order. 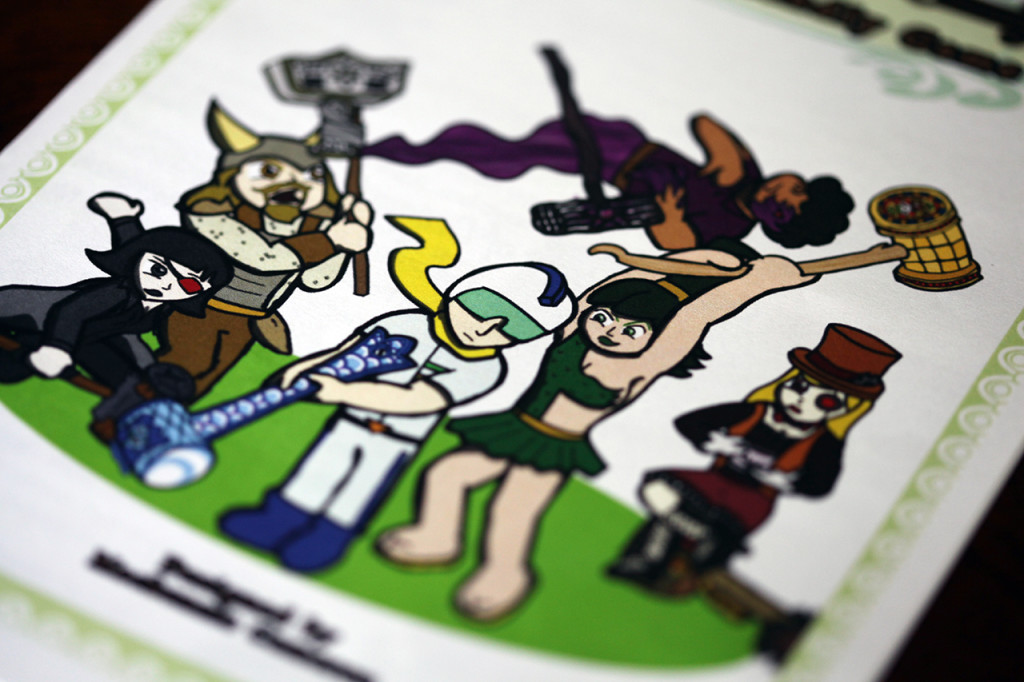 The game is played on a gridded arena board, and the layout of the course can either be set to the included quick play configuration, or can be customized to your heart’s content. Two differently numbered dice are used to determine the distance of the ball when hit, and a deck of ‘collision’ cards are used to see if the ball ends up physically hitting any of the objects it touches along the way.

A total of seven points is needed to declare victory, with two awarded for hitting the End Post with your ball, and another five on the line if you can make your way back through the wickets in reverse order to hit the Start Post, making this the most straight-forward way of winning the game. Additionally, given that this is Killer Croquet, points are awarded to players that knock an opponent down, or remove an opposing ball from play through the Poison effect that they can gain.

Players do not begin the game on the board all at once, rather the character and their ball are placed on the Start Pole location at the beginning of their first turn.

During a player’s turn, they may take two actions in any order, and may take the same action twice:

Each card in the collision deck features a symbol that shows if you collided with the object you were drawing for, and additionally a trajectory chart that shows in what direction your ball will bounce after the collision.

Hitting another player’s ball with your own will grant you a Roquet token that can be used to take an additional two actions. The token may only be used if you have no actions remaining for the turn, and is discarded at the end of the turn if you choose not to use it.

Hitting (passing through) a Wicket from the correct direction (orange arrows for the first time through, purple from the reverse) and in the proper order will cause you to score that wicket on the tracker and allow you to shoot towards the next target in line. This will also grant you a Roquet token.

Successfully hitting the End Pole, after going through all of the Wickets on the course, will score two points and let you flip your ball over to the Poison side, along with granting a Roquet token. With this Poison ability, you’ll now deal extra damage when smacking an opponent with both mallet or ball, and will also allow you to score points by knocking an opponent’s ball out of play with your own. Using this new-found power to wreak havoc might be good and all, but don’t forget that the match can now be won simply by finishing the course once more! 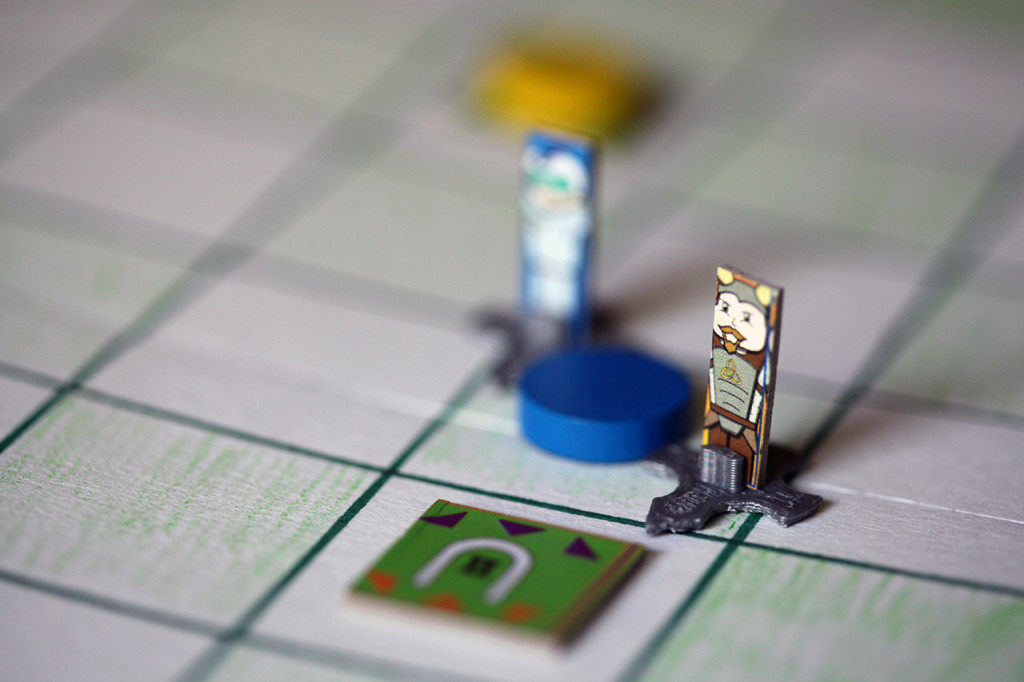 Killer Croquet is a relatively uncomplicated game that hits all of the notes suggested by the title. Providing a robust round of croquet interspersed with instances of deathmatch-level infighting, you’ll need to strategize between actually finishing the course and racking up the kills to inflate your score. Additionally, each of the characters come with their own unique powers, so you may do well to let their strengths determine your course of action throughout the game. One thing that needs baring in mind is the hefty upswing in deadliness once one or more players finish the first loop through the course and gain Poison; at this point in our games, it pretty much turned into a free-for-all as the increase in damage done with an attack or ball strike is enough to really hurt. Oddly enough, if you asked me, I would’ve been happy enough simply playing this game as pure croquet! With traps and perils aplenty to customize the course itself, you’ll never be playing the same game twice unless you choose to.

As mentioned up above, I did end up really enjoying Killer Croquet as a game of croquet, but could have done without the ‘Killer’ portion, as the fighting simply seemed to distract from the rest of the game.

To contrast Smee, what brought me into this game was more of the kill and less of the croquet. I enjoyed the unique translation of sport into game, but had the most interest in swinging my mallet at people’s heads, as opposed to having a gentlemanly bout across the pitch.

Unfortunately, Killer Croquet seems to have a slight slant toward the game itself, as the quickest path to victory is by simply playing croquet as it was intended. As you make your way through the wickets, the temptation to go out of your way to crack skulls will be outweighed by the the lower risk and higher reward of continuing through the course civilly. Once poison is gained, things do become much more hostile, as knocking down opponent’s with a stray ball or swift mallet swing is much easier; however, I’ve found it to mainly incite a defensive strategy, using this increased deadliness as more motivation to steer clear of others and finish the course quickly.

On the up-side, the game does work well, as the dice rolling and collision deck are easy to understand. Short set-up  and play time are a boon for Killer Croquet, though it is difficult to get too excited when the most unique element seems less viable strategically. The games where you and your friends beat on each other the entire time run long, and often the player who spends more time meandering through the course will be the most successful.

Playing Killer Croquet felt exactly like when I play real croquet: hitting my ball in circles around the wicket instead of through it, desperately trying to make it to the next one. Killer Croquet did not jump to the top of my play list, as reminding me of my lack of hand-eye coordination, even when simulated by dice-rolling, is not really the way to my heart. I did manage to win the first time I played the game, so that helped gain it a few points, though.

While playing, we discussed many variations on scoring that I think would make this game more enjoyable. As it stands, there is not much incentive to play dirty in this game, except for the fact that it’s really hard to play a clean game of croquet if you’re not rolling well. With that being said, though, your ball really needs to have poison in order to effectively hurt other players and get points for it, so you still need to be able to get through the course. I have mixed feelings, overall, about Killer Croquet: I would be willing to give it another shot, especially with some rule changes, but I’d have to run through quite a few other favorites first.

Croquet is a refined game, enjoyed by the elite and elderly, where players take turns hitting wooden balls through little hoops. Riveting! So how can you possibly translate that to an interesting tabletop experience? You add violence of course! Killer Croquet combines tactical course planning with frantic dice rolling and mallet bashing to give players a quirky take on this typically civilized sport. The gameplay captures the spirit/rules of traditional croquet very well while the “bash your friends head in with a mallet” mechanics add a welcome level of player interaction to a sport that is typically devoid of such thing (tea, old chap?). I did find that on the larger board the game dragged on longer than I would have liked but the ability to customize your field and scoring system allows you to set up the game however your heart desires. Overall, Killer Croquet is a light weight romp through the wickets; a mechanically sound game with an eccentric theme that is refreshing in a time where futuristic football games seem to dominate the sports genre.

The League of Nonsensical Gamers would like to thank Inkbrook Games for kindly providing us with a prototype of Killer Croquet for this preview.

Killer Croquet is currently funding over on Kickstarter. If this game piques your interests, head on over to the campaign page by Oct 1, 2014 to claim your own copy. For $40, you receive a copy of the game along with all reached stretch goals.