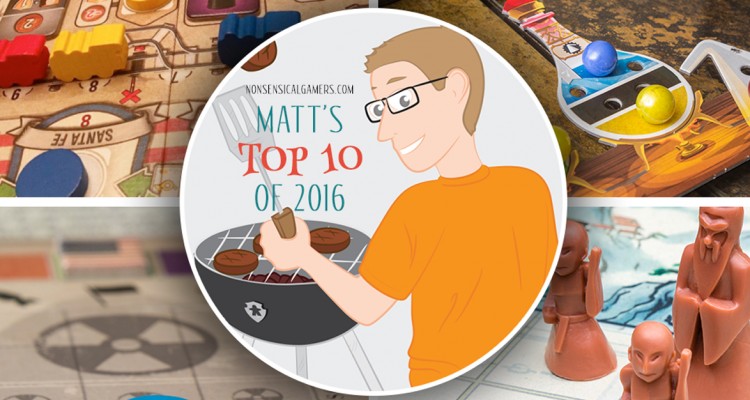 13 Days: The Cuban Missile Crisis was quite good to me in 2016. Picking it up on more of a whim (for a steal of a price at Origins Game Fair), I didn’t jump in expecting much. This may have helped it climbs the ranks here, as it proves to be an enjoyable and tense game that provides a respectfully objective look at this modern day political nightmare. The card play is quick and the area control calculated, given that you spend much of the game trying to stay your itchy nuclear trigger-finger. This was a resounding success for Ultra Pro and Jolly Roger; one that deserves your consideration.

Check out our 13 Days: The Cuban Missile Crisis Review!

While technically on everyone’s radar before 2016, the wide release of Potion Explosion came this year, a big one for CMoN Limited. I picked this up on a whim, knowing a little about its Match-Three gimmick and not much else. Surprisingly, and much to Kel’s delight, this game has been a huge hit with almost everyone I’ve played it with. The marbles prove to be more than just for show, working to make a light set collection game into something a bit more special. It’s not for everyone, but with an expansion coming soon and plenty in the core box, it’ll sit happily on my shelf for the foreseeable future.

Check out our Potion Explosion Review!

What stood tall as the poster-child for hype in 2015 is now equally the poster-child for why hype should incite skepticism over blind purchasing. Scythe, the beautifully crafted resource management game from Stonemaier Games is a wonderful title, but not at all worth the fervor it created. The aesthetic is legitimately stunning and the detail in the world elevates a relatively generic area control mechanism into something more. I happen to love area control, action selection and resource management, so I’m more than happy with my overpriced fancy version of Scythe. But I also openly admit that it crosses into the bottom half of this list based on its wonderful presentation, and would easily sit as an honorable mention if left to gameplay alone. A game worth playing and indulging in, but not the grail game some had hoped for.

A late-comer to the year, but still fulfilled in time, this kickstarted abstract title from Roxley boasts and adorable, clean aesthetic and equally minimalistic, streamlined gameplay. The game can be taught in less than five sentences and played in less than 20 minutes, while still offering depth and replayability through the use of variable role cards. The wealth of options in these individual player powers is a huge boon to a base game that may normally only appeal to the purest of abstract players. The powers give flavor and character in a way that I can’t get enough of. This is definitely one of the best two-player games of the year and will easily remain perennial in any two-player collection.

One of my absolute favorite genres or styles of gaming is two-player abstract gaming, so it’s no surprise that Onitama would find its way onto this list, alongside Santorini. Onitama delivers exactly what I want – a simple but thoughtful play experience and an absolutely gorgeous production. The atypical, magnetic sealed box and neoprene board are small but meaningful touches that help this title stand out above other hopeful Chess impersonators it may resemble. Fortunately, Onitama succeeds at taking those familiar movement options and transforming them into a completely different experience.

Check out our Onitama Review!

I seem to have a habit of gravitating toward Feld’s less “Feldian” titles, first with Aquasphere and now with The Oracle of Delphi, a dice-based racing game where luck and efficiencies must intertwine for you to find success. It’s not a cold and calculated as a Burgundy or Trajan, but it is well-made and proves to be legitimately unique, in a sea of point-based agrarian simulators. I’ve appreciated my time with it and hope to experience it further, even if Smee did proclaim it his most hated game of the year.

I continue to posit that Great Western Trail is likely the best euro-style game to come out in 2016. It’s deep but not overwhelming, varied and interesting, and all around a great time. While it still falls below some other titles on this list, I am close to adding this to my “Favorite Euros” list, alongside Russian Railroads and T’zolkin. It has charm and a puzzle that engages without being convoluted or difficult. It wants you to jump in and play it, not work to understand its goals. I waffle between this and Mombasa when considering Pfister’s best title to-date, but in terms of 2016 – this takes the cake.

Adrenaline is probably not the third best design on this list, but it is definitely one of my favorite games from the year. An area-control game hidden beneath the skin of a First-person Shooter video game, complete with all the trappings of your most beloved FPS franchises. Somehow, some way, this totally works. Adrenaline is remarkable in how it combines fast-paced, pulpy gameplay with strategic euro-style elements. This ranks so highly for me because it’s a package that is so surprising and so cleanly assembled. Even if it’s not your style of game, giving it a whirl once to just experience it is well worth the time.

Stronghold Second Edition manages to streamline the first edition rules and upgrade the production value enough that it really feels like a whole new game. It’s a hulking two-player title that makes an abstract board of wooden bits come alive as you thematically launch artillery weapons, maneuver troops, and stack the bodies of your enemies high. It has a lot to manage, but the back-and-forth between players feels meaningful and sucks you in. At its completion you feel like you’ve been through a battle and most games end by narrow margins. As a lover of two-player games, this title shines as a long, heavy euro with lots of interaction and theme.

A late entry, but one that started off a bit ahead of the pack, Arkham Horror The Card Game earned my affection before release with its focus on cooperation and story-telling through a Living Card Game system. It’s proven to provide a thematic experience equal to that of T.I.M.E. Stories, but in a way that is much more customizable and replayable. It is definitely one of the most successful cooperative games I’ve played and manages to portray its story with a flourish. I’m completely on board with the coming expansions and look forward to exploring its options at all player counts, 1-4. If you’re looking for an awesome story-telling experience, or just want to explore a well-designed cooperative game, you can easily look past the horror and tentacles and appreciate a wonderful engine underneath an equally commendable aesthetic.