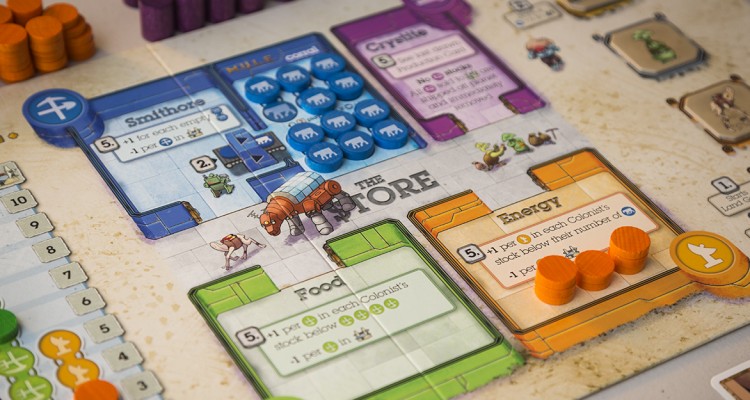 M.U.L.E. is a competitive economic game for three to four colonists, based off of the old Atari game of the same name. In the transformation from console to board game, many elements were faithfully kept, some of which made the transition across formats better than others. As colonists and prospectors on the frontier world of Irata (catchy, huh?), your job is to claim, assay, and exploit the natural resources of the planet in order to turn the most profit. A shared colony store provides a marketplace for your goods such as Food, Energy, and Smithore, which is in turn used to create the eponymous M.U.L.E.s (Multiple Use Labor Elements) that are outfitted to harvest these resources in the first place. Supply and demand drive the availability and prices for these three goods, while a fourth, Crystite, is shipped offworld and the market price is subject to the vagaries of outside events. Speaking of outside events, quite a few random happenings are built into the base game, so be prepared to take setbacks and chance in stride.

One of the first things you’ll notice after even a casual perusal through the rulebook, is that M.U.L.E. seems almost to be designed as a modular game; for every rule and mechanic there is also an option or perhaps a ‘designer recommended’ variant that lets you tweak it to your liking. There are two main methods of play, though, offering you a choice between the even-handed Beginner’s mode, or the slightly asymmetric and more involved Tournament mode. While you may wish to play an initial game on the lower level, spicing things up with the optional Tournament rules is highly recommended, and is the version of the game this review will cover. 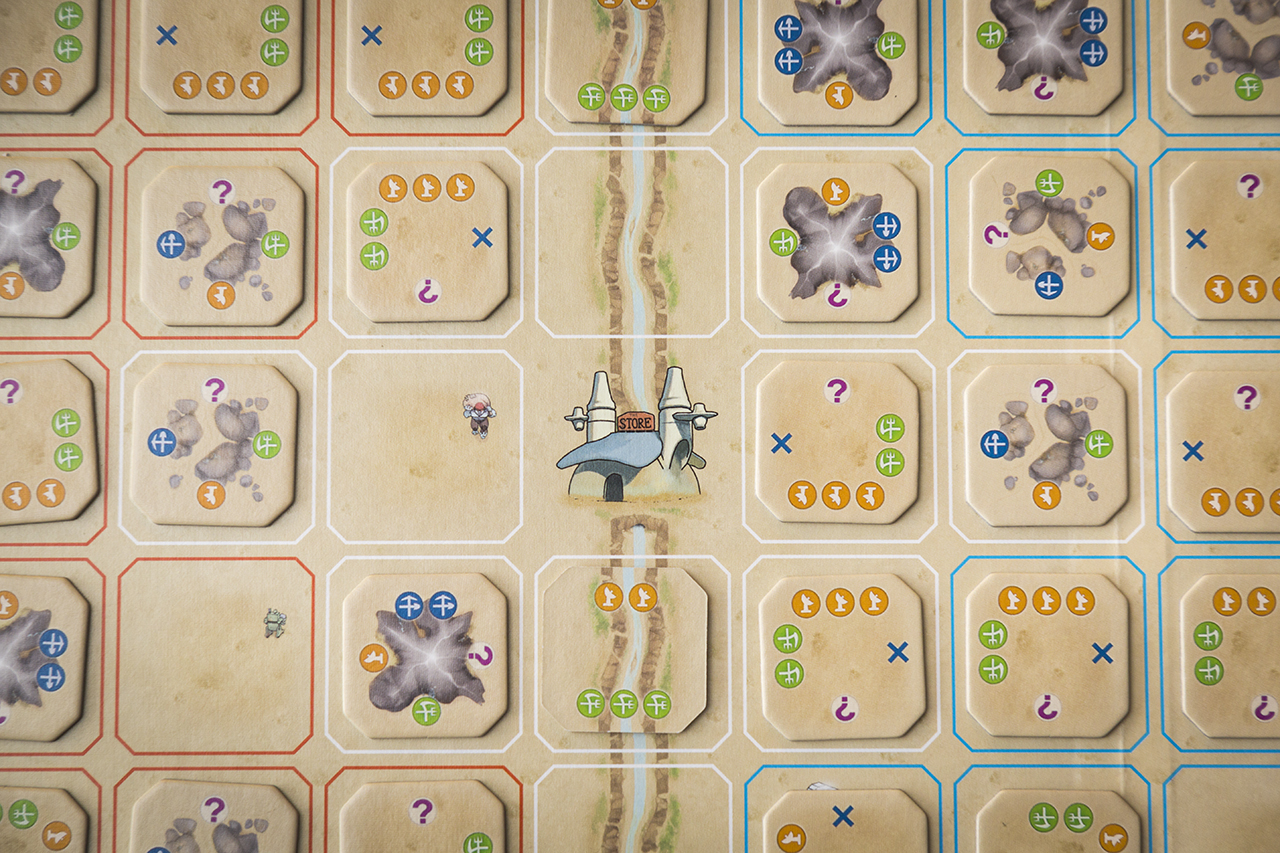 To begin, each player receives a Colony board, featuring a map containing three coloured zones upon which they’ll be placing their claimed territory, and then chooses one of the eight races available in the game. Two of the races offer a positive / negative handicap, and some have no powers at all, so materials are provided to allow each race to be chosen twice. The main map board is then seeded with a random selection of land tiles of four terrain types: Rivers, Hills, Mountains, and Plains. Each terrain has a different selection of resources that they may produce, including a hidden value of Crystite. For this reason, the land tiles begin the game with the Public side face-up, keeping the Crystite value unknown until assayed. Players also begin the game with an initial stake of cash, enough Food and Energy for the first turn, a Land Auction card, and a Package from the Homeworld card that can be used to provide Energy / Food during a time of need. The game will progress across seven rounds, tracked by the special events from the Production deck, the first six of which will generally initiate a global modifier to one or more resources, or perhaps be a plan-thwarting Pirate Attack or Store Fire! The final turn occurs when the The Ship is Back! card is revealed, at the end of which all players must sell their remaining goods to the colony store and count their profits. Whoever has the most cash on hand at this point is the winner!

Each turn proceeds through a series of eight phases:

If The Ship Is Back! card was drawn during this turn, the game ends after the completion of the Ranking phase. The player with the most cash on hand is declared the most successful colonist, and the winner! 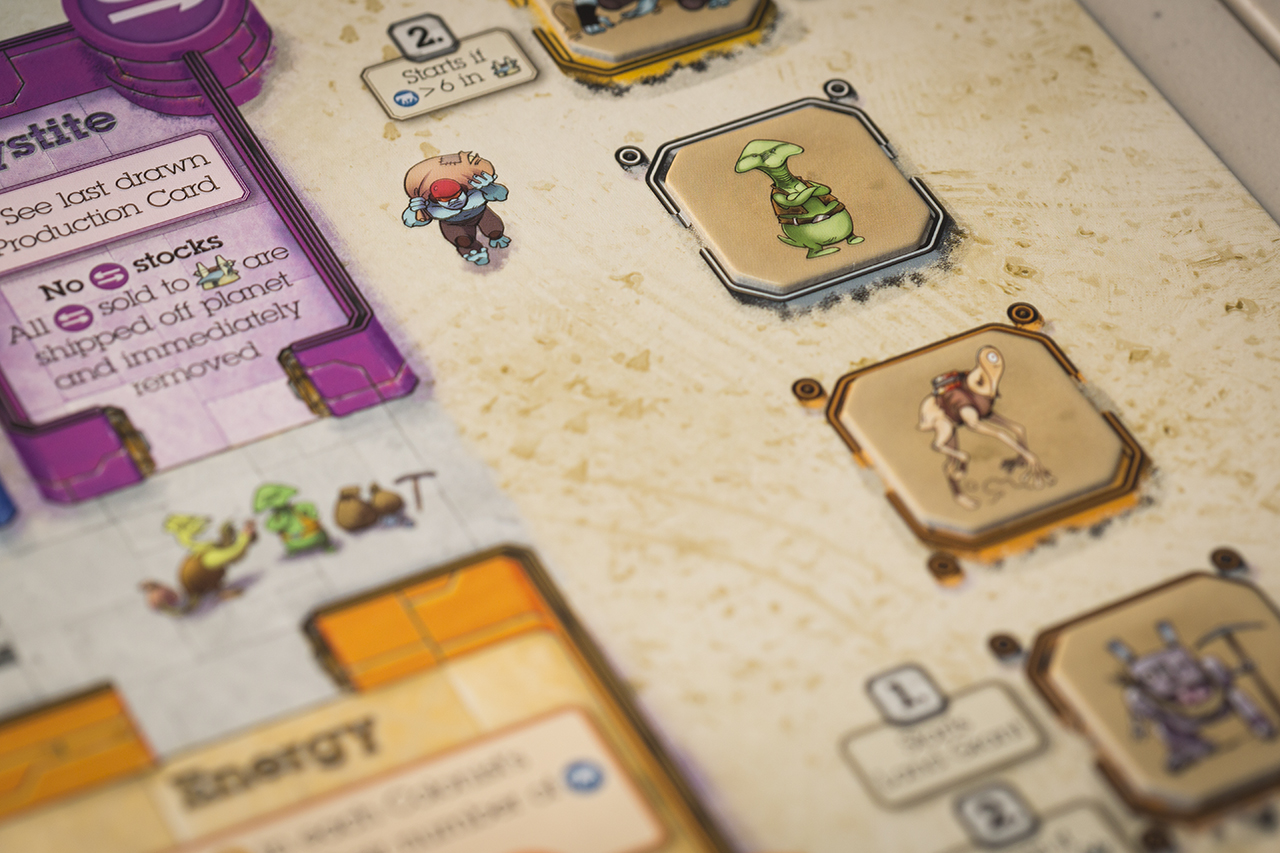 M.U.L.E. is a faithfully and well-produced reproduction from the early era of computer games; while this might seem an odd marriage of ideas, the basic economic engine is one that has survived well throughout the years, and as one of the first multiplayer-style games, it fits well into the current board-game paradigm. While the sheer number of variants and options available may seem overwhelming, it also allows you to pick and choose through a number of possibilities, many of which may smooth off a rough edge or two in your playing experience. The randomness of the Personal Event cards and even the Production deck may be offputting for some; an ill-timed Store Fire, which removes all of the in-stock goods from the colony store, can cause grave dissatisfaction when you were counting on the prices to tank due to an overabundance of supply.

Speaking of the store, the internal price-regulation mechanics are simple, but it may still take a play or two to learn how to gauge the change in costs from turn to turn. During our first game, we pegged the prices at the top of the charts for each and every resource after the first Pricing phase, and many stayed there for the rest of the game. Estimating the opportunity cost of producing what you need versus what will sell in the store is an important thing to consider. Overall, keeping the above caveats in mind, I would happily recommend M.U.L.E. to those that enjoy a light economic game, especially if they’re the sort to revel in the inherent nostalgia of the title. 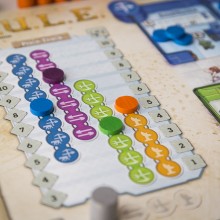 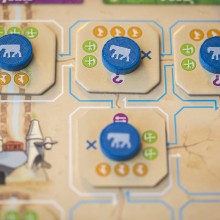 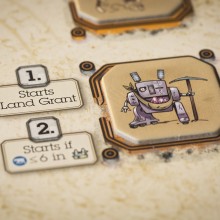 At first glance, M.U.L.E. is a tough game to peg, but you’ll quickly find that its quirky, tongue-in-cheek exterior acts as a thin veneer for the more straightforward economic inner-workings beneath. While you may play as a round, blue ball holding a golf club, or a creature most definitely derived from human male anatomy, your real focus moves past the silliness and focuses on the ups and downs of an ever-shifting commodities market. Getting a good handle on this basic exercise in supply-and-demand is the key to profiting big. What makes it tough, and more of a game to be played rather than a math problem to be solved, is the randomness created by your opponents and the event cards. While we eventually tossed the Lucky and Unlucky event cards because our group proved that we don’t play nice with others, there is still enough chaos created by independently minded people and the Crystite cards to make the buying and selling for profit a wild ride. And while the modularity in the rulebook seems excessive, it is nice to know that M.U.L.E. can be tailor fit to your group’s play style, with options ranging from complete card-flip gambling to more strict and sensible economics. Overall, I liked the game and found it to offer a different experience from many other games I’ve played. Anytime someone wants to break out the solar powered work horses and harvest some purple rocks, I’m game.