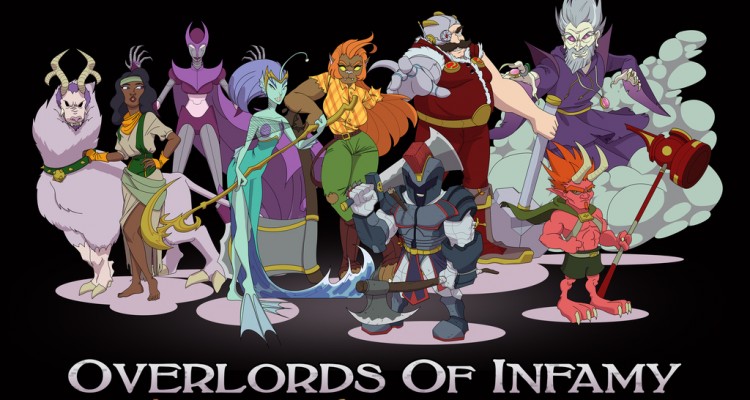 “Lackeys! Get in here!” – As the cry rang through the once stately, but now neglected halls, the plodding of reluctant feet could be heard converging on the impatient Overlord. “Finally! I have another genius plot to overthrow the Kingdom of Good, and this is the enthusiasm I get?” The grandly-gesturing figure pauses for a response, seems disappointed in the lack, but carries on regardless. “It’s devious, nefarious, and downright diabolical! I plan to make everyone’s socks just slightly damp! The common folk will be so miserable, no one will even bother resisting us!”  Launching into a fit of maniacal laughter, they break off mid-cackle to scowl at the gathered lackeys. “When your Overlord laughs, you laugh! Now get out! You’ve work to do!”

Overlords of Infamy, from newly established publisher Obscure Reference Games, is a resource collection and contract fulfillment game for 2-4 evil and dastardly masterminds. You will plot and scheme to bring misery to the land in the worst imaginable ways, all the while deploying your spies to hinder your competition. Be the one to complete the most nefarious of plots by the end of the game in order to destroy the Kingdom of Good and become denounced the Supreme Overlord of Infamy! 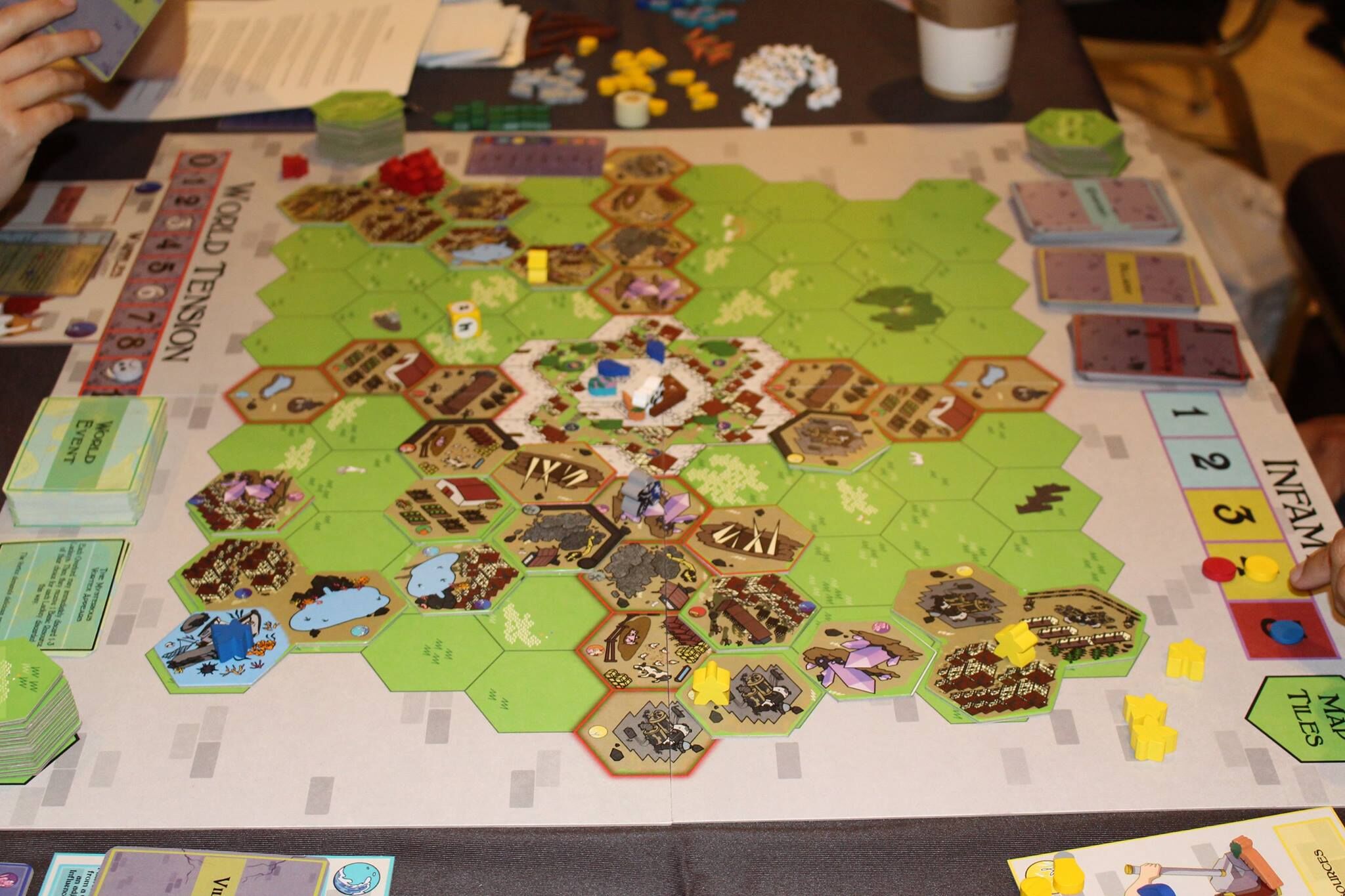 The Classic Evil vs. Good Story

Gameplay in Overlords of Infamy centers around a hex-tile map that is divided into four zones of influence—your individual play area—and the Kingdom of Good. Each player’s zone of influence is separated from his or her opponent’s by a contested zone where natural resources may be gathered. It is your goal, as a depraved mastermind, to exploit the Kingdom’s domain for your own evil schemes, gathering the land’s resources and using them to fit your needs.

To do this, each turn you will spend 3 action points on a variety of different options. Most commonly, you will begin your wicked conquest by exploiting the land; this action allows you to draw tiles and fill your zone of influence with the resources you find most valuable. Once placed, you may then use your lackeys to harvest these resources, which are gathered and stored to complete your active plot – a hilariously awful deed that will be completed once all of the necessary resources have been collected. The repetition of exploiting and harvesting the land forms the foundation of Overlord’s gameplay.

Once your lands stretch to the borders of the Kingdom of Good, you may then spend actions to wreak havoc on the city, stealing ancient relics and stockpiles of resources. This allows you to advance further toward your end goal by completing more difficult plots and spreading more misery. Beware though, because the more active your campaign becomes, the more likely the Kingdom is to fight back against the gathered Overlords. Specifically, harvesting, stealing from the Kingdom and completing plot cards all advance the World Event track, symbolizing the population’s response to the slow creep of darkness in their land. Reach 10 on the track and all Overlords suffer a consequence in the form of a World Event. These range from the food spoiling “Rodent Infestations” to the dreaded “Natural 1,” which fully embodies the awfulness that is a d20 Critical Failure. 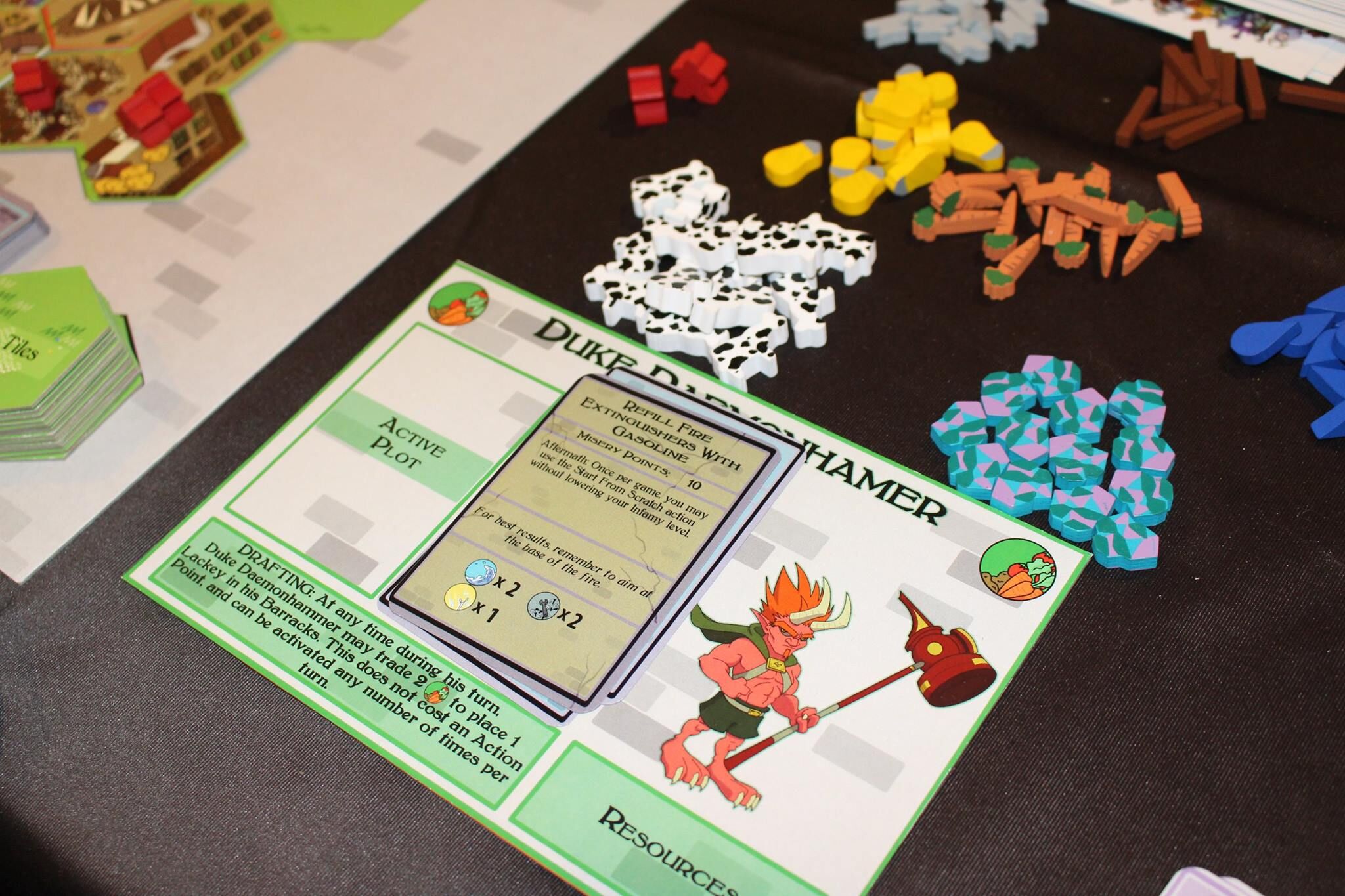 On top of these dangerously funny events is the activation of the Adventuring Hero, which occurs when the track crosses the 3, 6, and 9 spaces. Tripping one of these benchmarks will allow the next player to take control of this noble do-gooder, and likely use him to liberate your land, steal your resources, or defeat your lackeys. But don’t worry, the Hero is just the beginning of your worries, as each player’s turn ends with an additional Espionage Action, taken without spending any action points. These actions can occur only if you and said opponent share a border, but chances are your lust for power will have you meeting this requirement fairly quickly. The espionage actions available are based on your Infamy level, which is increased by completing plots, with the more advanced actions being more devastating to your target. The Level 1 “Glean Intel” action, for instance, simply allows you to peek at another player’s plot, while the Level 5 “Assassinate” action allows you to outright dispose of an opponent’s lackey and obtain the resources from an opposing plot of land. One of these actions may be taken before the end of each player’s turn, provided they have a valid target, making player interference frequent throughout the game.

Each player progresses through their turns in this manner until a certain number of World Events have been triggered, at which point the game ends and the player who has gained the most Misery points from completing plot cards, as well as a few extra points from leftover resources and lackeys, wins!

All Coffee is now Decaffeinated!

What was largely left out of the rules overview for Overlords of Infamy was the rich and infectious humor found throughout. Upon opening the box, I was unsure of where the game would establish itself, but one quick glance across the plots, events, and the 9 unique overlords made it clear how the designers wanted you to feel. It’s hard to keep a straight face or take even the worst act of espionage to heart when periodically your friends will read aloud from their completed plot cards:

“I have deputized a full force of Grammar Police!”

“I have hypnotized subjects to randomly confuse homophones!”

“I have mind controlled a nearby Yeti tribe to do my bidding!”

Or even better, when your best exploitation trips space 10 on the World Event Track and the people of the Kingdom of Good respond with:

The clear tongue-in-cheek nature of Overlords is what best helps the gameplay stand out and also softens the constant barrage of player interference. Being regularly thwarted and accosted by your opponents is made much easier knowing that you get to play as Waffles, the most evil Corgi in all the land. Art direction should also be commended here, as the final illustrations of the individual overlords and board tiles add a dark whimsy that help to better characterize the world. 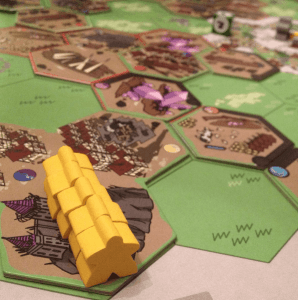 Unfortunately, in the case of Overlords, my love for the theme and humor is somewhat betrayed by a much less endearing gameplay experience. In isolation, I enjoy many of the pieces that the game is composed of. The inclusion of asymmetric Overlords is great and the idea that specific beneficial actions push you toward the World Events, and the end game, is a concept that I really enjoy. Where things fall flat for me is in the foundation of the game, the land exploitation and resource harvesting. Setting aside the espionage actions for a moment, your turn largely boils down to placing lackeys and gathering the resources on your plot card, then recalling your lackeys so they can be placed again. This isn’t inherently bad and as a mechanism it is perfectly functional; the issue I take is with its ability to engage the player. I’ve found the game to be largely devoid of interesting decision points. Each turn, I know what I need, so I place my lackeys there. If I don’t have the resource, I draw some tiles to find it, or I build toward an opponent so I can steal it. Completed plot actions, individual player powers, and espionage actions do add some spice to an otherwise bland package, but I fear it’s not enough to make the game memorable.
Overall, while there are bits and pieces in Overlords of Infamy that I think really shine – the World Event Track, the Adventuring Hero, the flavor, and the rulebook (it’s a well-written and detailed rules set)—it seems like the concept and writing direction that are so spot on were not carried through to the gameplay design. For myself, as an experienced gamer with regular exposure to all aspects of the hobby, I just don’t see enough innovation in Overlords of Infamy to be won over.

On the surface, Overlords of Infamy hits all of the right notes, colorful characters, the classic theme of ‘Good’ versus misguided ‘Evil’, and a touch of weird fantasy with the availability of ‘sparktech’ and the various nefarious plots that are up for grabs. On the other hand, there seems to be an odd conflict where the game wants you to laugh at it, and yet take it seriously at the same time. I think if Overlords had gone full-on towards the whimsy side of things, it may well have made for a more enjoyable game. While the espionage actions and the meddling Adventurer effectively portray the squabbling between petty ‘Overlords’, as is, there’s really no *meat* to the game play. You either have the resources available to complete your plot, or you don’t. Either your affinity matches your selected plot, or it doesn’t. If so, great! If not, well, enjoy your damp socks while your opponents are off turning everything to lava.

The League of Nonsensical Gamers would like to thank Obscure Reference Games for providing us with a prototype copy of Overlords of Infamy for this preview. We were not compensated for this preview.

Overlords of Infamy is currently funding over on Kickstarter. Head on over to the campaign page to purchase your own copy.