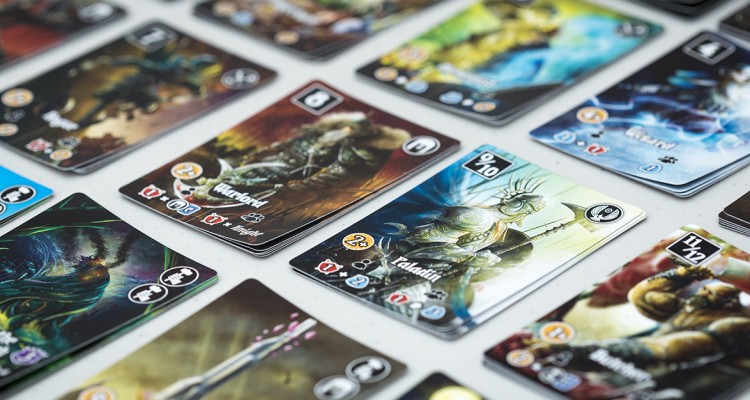 Under attack by monstrous creatures of old, the Kingdom of Valeria must stand strong in defense of the land. The Dukes and Duchesses of the realm gather mighty bands of heroes to their cause, and in the end, the strongest of them will gain the glory.

Valeria Card Kingdoms is a tableau-building dice game in the same vein as Machi Koro. The goal is to build your city by recruiting the citizens required to help you fight a variety of monsters while continuing to grow your domain. At the start of each player’s turn, the dice are rolled and everyone may use the values to activate the citizens in their tableau. These citizens provide the resources necessary to build domains and slay monsters, which will provide a source of victory points, along with those from end-game the end-game bonuses that your Duke offers. 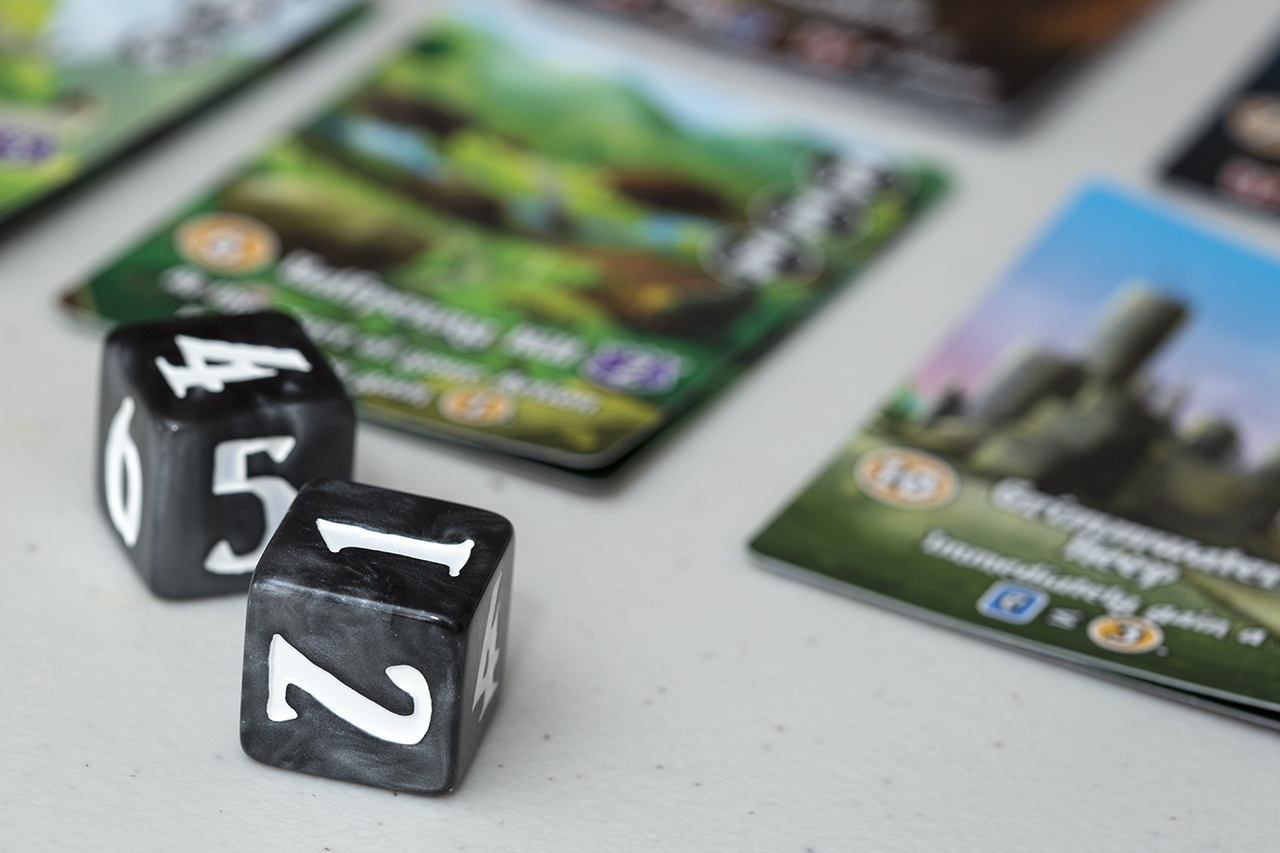 Every player begins the game with the same 2 citizens, a hard-working peasant and a noble knight. On their turn, the active player will roll both dice. Each die may be used to activate the citizen of the corresponding number, as well as any that match the sum of both dice. The active player will collect the resources on the left side of their citizen card, while all other players will collect the resources listed on the right. The active player can then take 2 actions from the following:

The active player then ends their turn by checking for the end-game conditions and passing the dice to the left. The game will end if the last monster has been slain, all domains have been purchased, or the final exhausted stack card has been placed.  All players will get an equal number of turns and then victory points are tallied.

The minor nuances of this game are what make it unique. For instance, all players receive a Duke card at the start of the game. These cards offer an avenue for end-game scoring that can fine tune each player’s strategy for the game. These cards typically offer points for specific types of cards, certain monster types, role icons (which each citizen and domain card has) and/or unused resources. The domain cards allow players to gain extra bonuses or powers that can be used throughout the game, while the third type of resource, magic, can be used as a sort of wildcard to supplement gold or strength as long as a single gold or strength has been used already. Finally, as a consolation, if the dice do not activate any of your citizens, you gain a resource of your choice; even when not the active player. Each of these small component parts, when combined, create a unique and enjoyable experience. 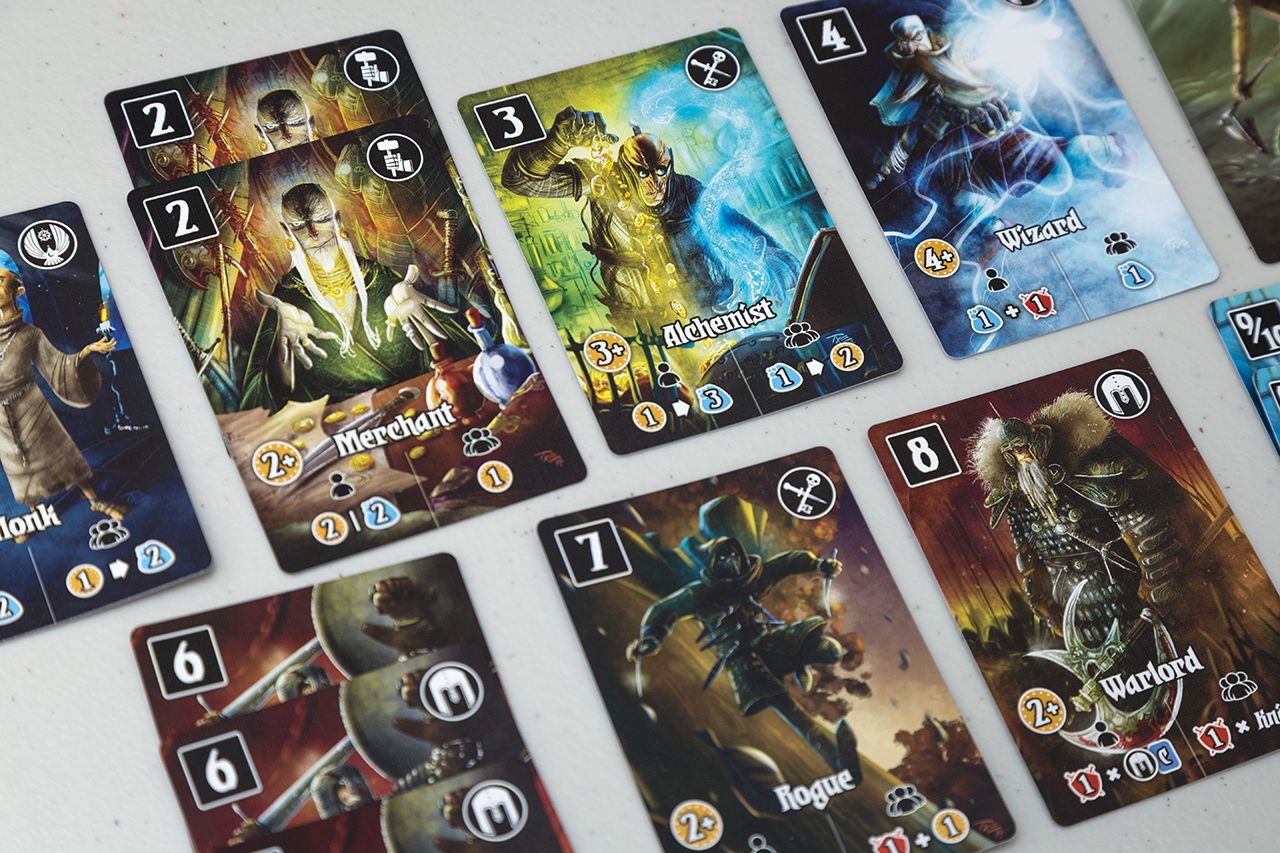 In the end, I would say that Valeria Card Kingdoms is what I had hoped for out of Machi Koro. It’s more engaging and offers a fuller experience, while still allowing novice gamers to find it easy to learn and fast paced. If anything, Valeria feels too short at times with the game’s end coming before I can bring my strategy to its peak fulfillment. However, I do like quicker games that provide a rich experience, so it’s still not much of a negative. I also appreciate that it forces you to remain attentive throughout, with citizens to pay attention to and resources to manage even when its not actively your turn. The variety of citizens and monsters also allows for a slightly altered approach to the game during each play; you can throw in the thief to have some “take that” opportunities for player interaction, or add in monsters who must be slain with strength and magic, for an extra twist.  Adding even more to that diversity, there are two distinct options for each citizen value that allow for citizens to offer a different reward depending on if you are the active player or not. Some citizens will be weaker when you are not the active player, while some will build off of one another, allowing a powerful conversion of resources when used off-turn. The expansions seem to be promising as well, with the first ones adding in Exhausted stacks cards that include events when they are placed.  Finally, from an aesthetic point of view, the artwork is amazing and the box insert with divider cards makes set-up and tear down very convenient. Overall, it’s a game I’m happy to include in my collection and probably has a place in most gamer’s collections. 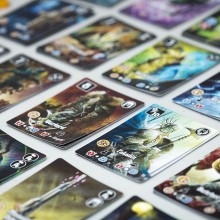 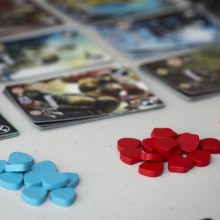 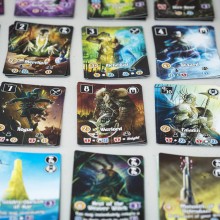 Described as a “better Machi Koro”, I was caught between skepticism and hope when this new release hit the table. While I actively loathe the former, Valeria was a pleasant surprise. With three types of currency to collect and spend, one of which acts as a wild card, and the increased ability to activate your cards from each individual die as well as their combined values, there wasn’t a single turn in which I was stuck actionless. While there are still some cards that will mess with your opponent, nothing I saw matches the sheer ugliness of a theft-based Machi Koro strategy. While there is currently a serious issue with a number of cards warping, the publisher has promised to make good on the problem, so I have no real complaints there. Two Thumbs for Valeria: Card Kingdoms!

Valeria: Card Kingdoms is what I had hoped Machi Koro would be. The games share a similar central dice-rolling mechanic but Valeria adds a number of new and refreshing elements. For one, downtime is virtually zero in this game due to the ability to collect resources based on what others roll on their turn. This slight change keeps everyone engaged throughout, keeps the pace quick and ensures that you always have something to do on your turn.  The second thing I love about this game is the variability within the base box. There are a number of monsters, citizens and domains in the game to ensure that each game brings with it new tactics to employ. In addition to the solid game play, Daily Magic has continued to exceed visual expectations with the amazing artwork from Mihajlo Dimitrievski which does a wonderful job of immersing you in the world of Valeria. I am a big fan of this game!