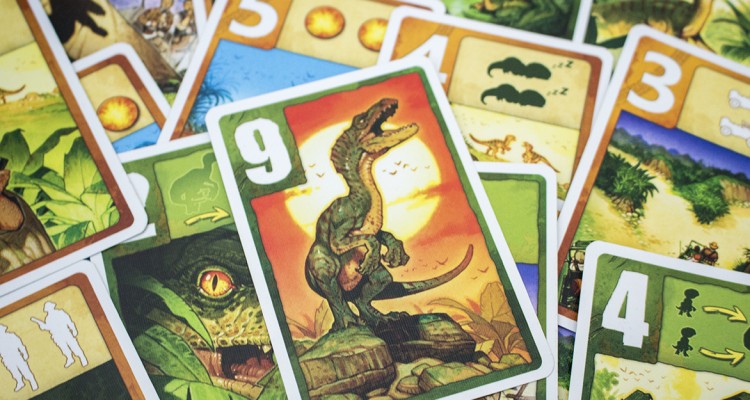 Tucked safely away from disaster and discovery both, a small pocket of prehistoric dinosaurs have survived through the ages, and still remain on one lonely Pacific island. That sanctuary is lost, now, as a team of scientists have stumbled upon this remaining refuge in their quest for discovery. How valuable would it be, they wonder, to take back samples of these long-thought-extinct creatures? An expedition was soon arranged, and the hunt was on! What they failed to take into account, however, is that velociraptors don’t take kindly to being hunted, especially with their babies at stake.

Raptor, from Bruno Cathala and Bruno Faidutti, is a fast paced asymmetric card-driven board game featuring simultaneous action selection and a healthy dose of double guessing. In a game that captures the efficiency and swiftness of its namesake, players will take on the role of either a mama raptor and her babies, or a team of scientists in this engaging and interactive man versus dinosaur battle of wits. Will you defend your island from the invasion of mankind, or be the one to transform the landscape into the next great tourist attraction? 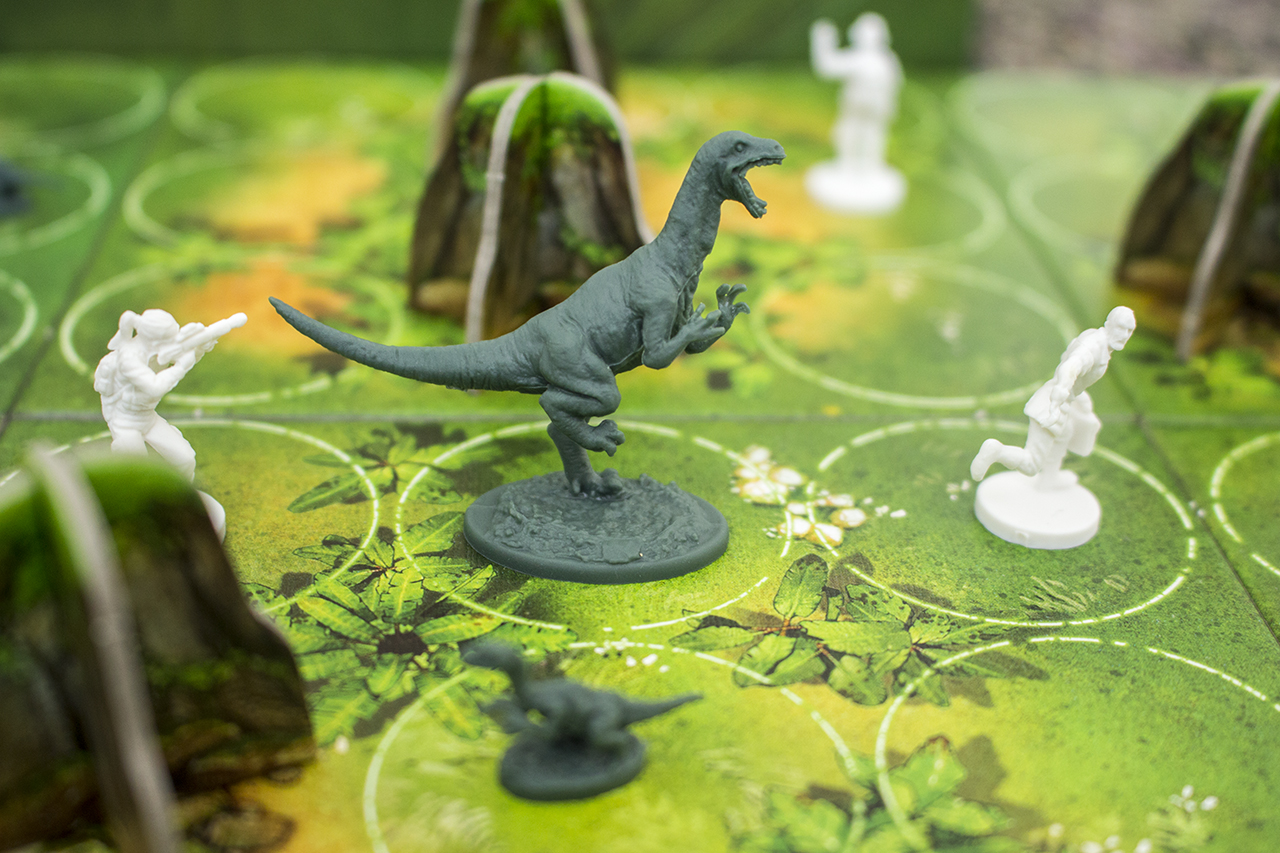 Hold onto your butts!

In Raptor, each player has their own unique end-game objectives that they must complete to be victorious. The raptor player can win by killing the scientists that are in pursuit, or by helping three of her babies escape the board to the shelter of the deep jungle. In return, the scientist player must neutralize the mama raptor or capture three of her babies to claim the win.

The core mechanism, simultaneous card play, is one of my favorite mechanics in filler-style games (Brave Rats and Eggs & Empires being two of my recent favorites to also use it). In this instance, the designers have given the mechanism a particular twist in Raptor, adding more tense decision points to each card selection—clever guys!

So, how does this twist work? You and your opponent each have a deck of nine unique cards numbered—you guessed it—one through nine, all with their own special action. Every round, you will select one card from your hand of three and place it face down on the table. Once revealed, whoever played the lowest rank will act first, and may use the card action depicted. The higher ranked player receives action points equal to the difference between the value of the cards. For example, if I selected a two and my opponent played a seven, I could take the special action shown on my card, while my opponent would then receive five action points to spend on movement and/or attacks during this round. 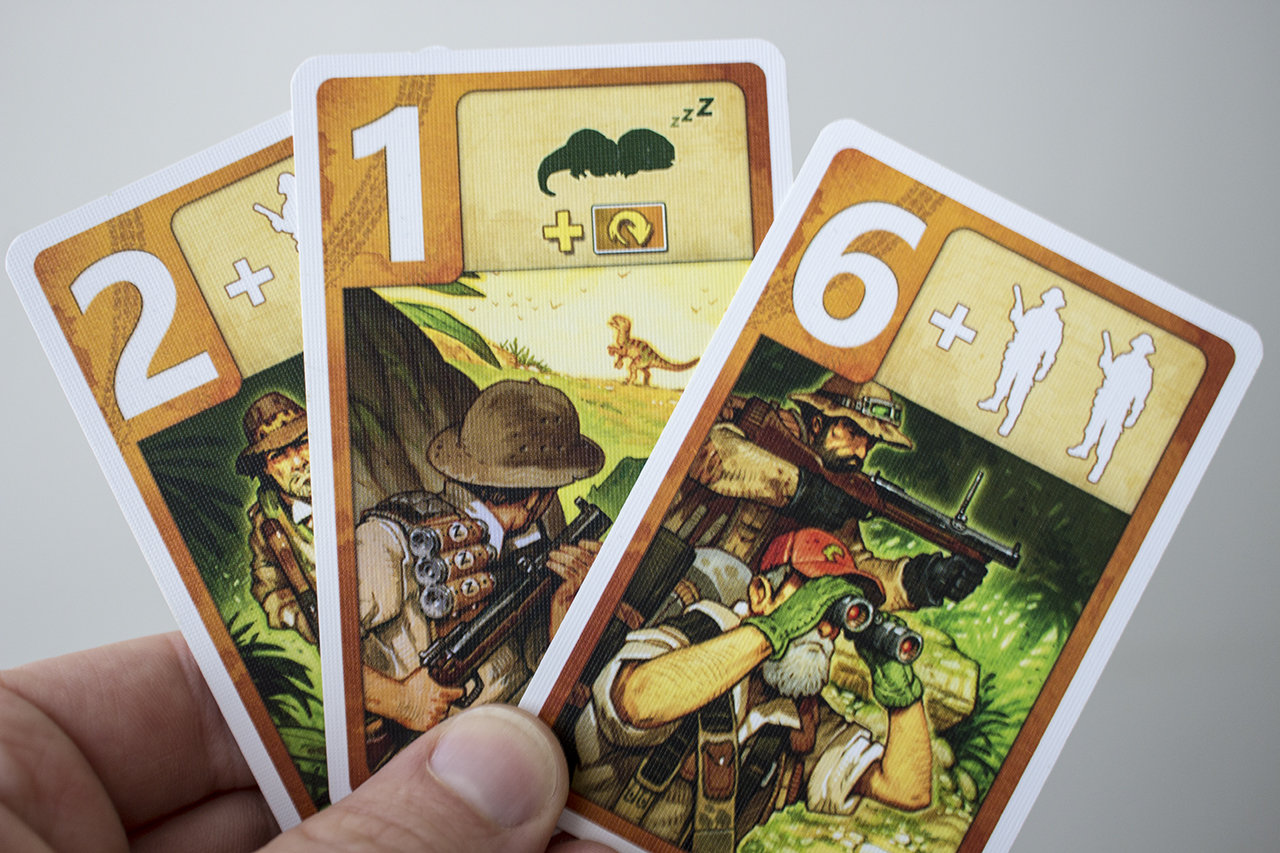 The raptors and the scientists each have individual actions to use, making the two sides different to understand and play. The scientists can stun the raptors, use fire to create blockades and call for reinforcements (trust me, you’re going to need them). The mama raptor can move swiftly across the board to hide in the bushes, frighten/attack the scientists and revive her stunned babies.

At the end of the round, you draw back up to three cards. Cards previously played however, will not return to your deck until you run out of cards to draw or you trigger the special action on the rank one card allowing you to reshuffle previously played cards back into your deck. Play continues in this manner until someone has achieved one of their victory conditions and the game ends.

Scientist vs. raptor, friend vs. friend, this game offers a head-to-head tactical experience that is both entertaining and immensely charming. In typical Matagot fashion, the artwork and components excel at immersing you in the game’s theme. The combination of Vincent Dutrait’s detailed card and tile illustrations along with the various miniature sculpts help transport you directly to that mysterious and time-lost island in the Pacific Ocean. The island itself is comprised of six large double-sided tiles that are randomly arranged at the beginning of every game to create a variety of jungle or desert layouts.

The core mechanisms for this game are straightforward and convey the game’s theme well. In particular, the simultaneous card selection (and associated action allowance) lends drama to the hunt that is taking place on the table. Such a seemingly simple choice of picking one of three cards carries huge repercussions—do you play low in the hopes of gaining the needed special action, or go high and try to squeeze in a few action points? This is the basic decision that you’ll have to consider every turn, but the game state will also dictate additional variables, such as the physical location and quantity of figures/obstacles on the board, that are important for you to take into account while plotting out your actions.

You may find that the pressure grows as the game goes on, and you gain further knowledge of just what cards your opponent has remaining. One wrong decision, while not always lethal, can swing the game if you give your opponent too many action points; or perhaps letting them have that special action they needed can come back to bite you (literally). 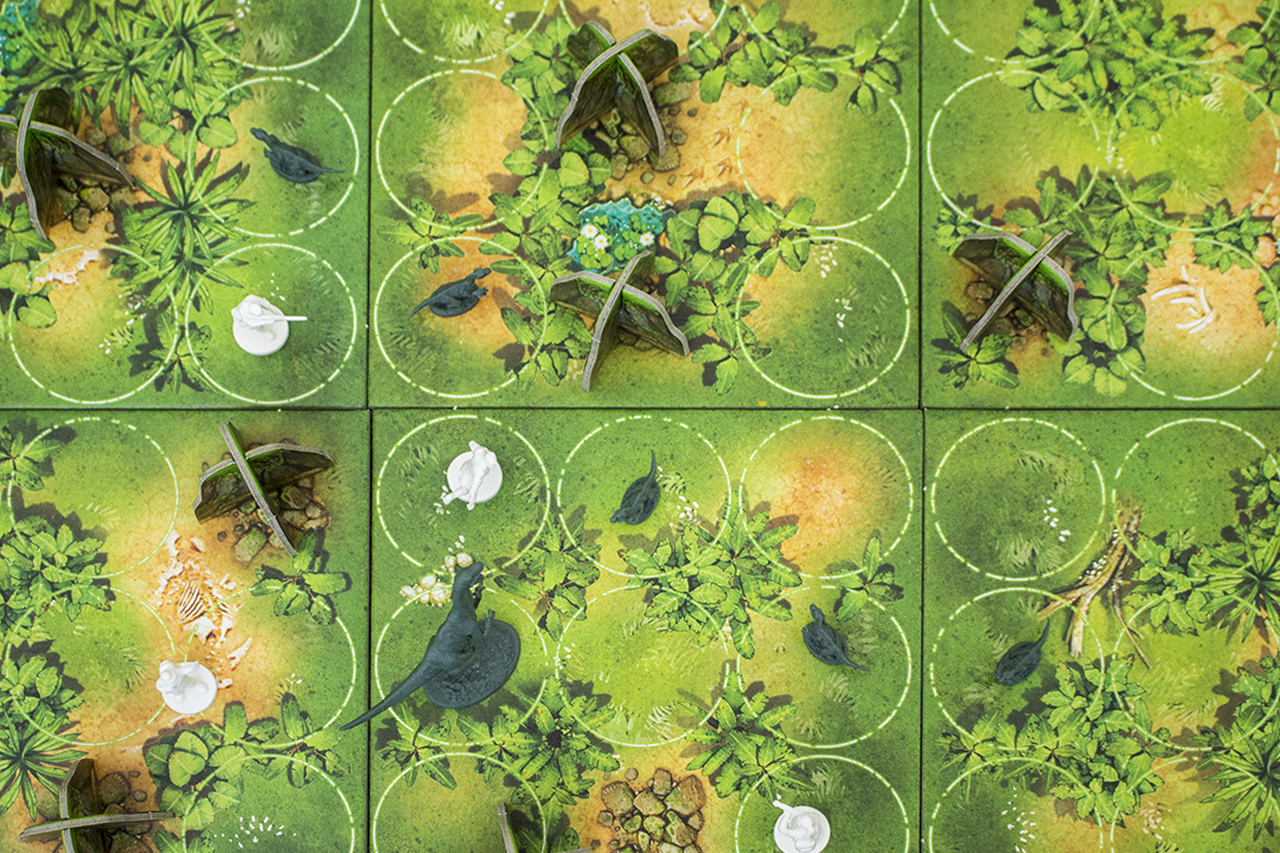 The tactical nature of the restricted hand size is the one element of the game that could turn people off. There are times that you have solid intel and can make an optimum choice, and yet there are instances where you are simply making an educated guess due to limited knowledge and the randomness of card draw. Raptor is all about adjusting on the fly, as if you were actually in the jungle yourself, so I could not take issue with this even though it played out to my detriment a few times. After drawing a poor hand, it pays to get creative and use those social skills of yours. The ability to get into your opponent’s head and understand what his or her next move will be is half the fun.

The designers have done an impressive job on balancing both sides, making each role diverse and compelling to play. After repeated plays (and from witnessing others), we have not found that either side has a true advantage over the other from a win percentage standpoint; both roles have had their fair share of the glory, with the raptors perhaps holding the slightest of edges. Again, it’s a great testament to the design that this is even debated.

Raptor is tense, tactical and full of variety and theme! If you’ve ever wanted to experience what it would be like to hunt that Clever Girl from your childhood, or better yet, hunt your friends, Raptor is the perfect game for you.

The League of Nonsensical Gamers would like to thank Asmodee for kindly providing us with a copy of Raptor for this review.

Raptor is a great game that basically lets you play Jurassic Park on your table top! Similar to Eggs and Empires, you choose from three cards in secret to determine what actions you’ll be able to take. This game takes a few plays to get the hang of things, in my opinion. Shooting for the action points versus trying to get the scrub dictated by the card you’re playing is quite difficult when you have no idea what your opponent will be doing. While action points allow you to move around and try to take out your opponent, the cost is that you go after your opponent has a specialized action. The whole game is a sort of tug of war made all the more exciting by the prospect of catching dinosaurs or eating scientists. And each game is different due to the randomized card draw! I definitely look forward to more jungle adventures and recommend checking this one out.

Raptor brilliantly manages to fuse tactical gameplay with simultaneous card play, a mechanism I’m quite fond of, and creates an exciting and tightly contested hunt where every move seems to count. Thematically, the game embraces the presumed efficiency and swiftness associated with the death machine that is the Velociraptor. Chaining kills as the dinosaur brings me much pleasure and initially can seem overpowered. But, on the other hand, finding the opportune moment to call in reinforcements can send the raptor back into hiding. The intimate 2-player gameplay is an engaging, modest battle of wits which reveals more depth than might be expected from a game of playing numbered cards. Plain and simple, this is one of my favorite games to come out of 2015. It can certainly be played several times in one sitting, if no one overthinks it. And, flipping the modular board tiles, as well as roles, creates new challenges and hunting grounds. The only downside to Raptor is the need for everyone to constantly quote Muldoon!

With a few plays under my belt, I’m happy to say that Raptor is a big success in my book. It’s two-player only, provides a nice give-and-take puzzle, and utilizes simultaneous action selection wonderfully. It requires experience, creativity and a few clever mind-games to properly execute your goal on either side of the board.

My few plays have slightly favored the scientists, contrary to Dan’s comment above, as they really play a more defensive game of positioning and waiting to strike. Playing as the raptor is a balance between safely escorting your babies, while using yourself as a dino-dart board, and striking swiftly to whittle down the scientist’s numbers and put them on their back foot. You can quickly become overwhelmed if you don’t sink your teeth and talons in quickly.

I’m excited to continue exploring this title and, at 20-30 minutes per game, I think it will be easy to rack up dozens of plays in the coming months. The Bruno-squared team and Matagot have a gem on their hands here; I happily recommend adding this one to your collection.