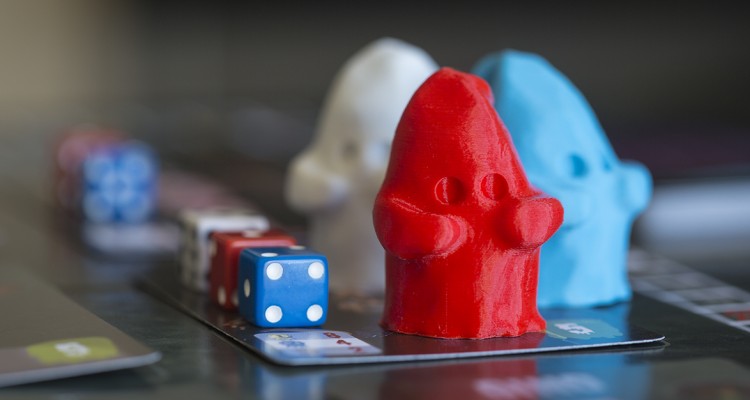 Creepstone Manor has remained vacant for nearly 100 years and the resident ghost, “Spookie” has enjoyed the peace and quiet. But now that the manor has been renovated and reopened as a new hotel, Spookie is a very unhappy spirit, so he’s come up with a plan to reclaim his manor. By recruiting his fellow ghostly minions, they will work together to scare away the hotel guests and reclaim the property. There is some friendly competition, however, to win the favor of Spookie by scaring away the most courageous of guests. Using your skills and some helpful tricks you pick up on the way will help you win Spookie’s favor and claim the title of “top ghost”.

Ghostel is a light-weight dice placement game where players take turns moving their ghost from room to room and placing Terror dice to scare away guests and earn points. The more courageous guests may take some cooperation from your fellows and multiple dice to convince them to flee the hotel. Players can also purchase favors and tricks from Spookie to help them gain more dice and a leg up on the competition. Once all guests are scared away from the hotel, the ghost with the most (points!) is the winner. 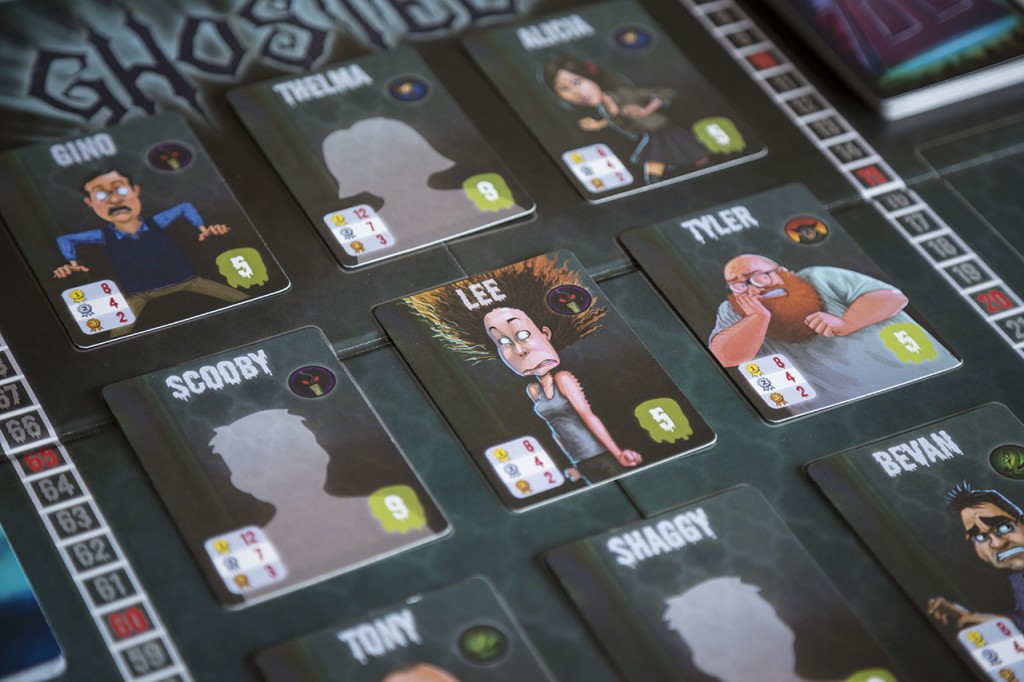 Got Ya, Spooked Ya

Ghostel takes place across multiple rounds, each of which begins by rolling your collection of dice. You start with three 6-sided dice, but can accrue additional (and even a single 8-sided die) by buying upgrades between rounds. The player who rolled the highest total begins the first round by choosing one of the brave guests of the Ghostel, and entering their room. Whenever your ghost enters a room, one of your dice must be placed on that guest. Your goal is to have the total of all dice in the room meet or exceed the guest’s “courage value.” On each subsequent turn within the round, players must move one space orthogonally and place a die. Play continues around the table in this manner until each ghostly player has placed three dice.

At the end of the round, you will determine which of the guests have been successfully scared away. You and any other player who contributed to the scare will then score points based on who contributed the most, second most, and then those who at least tried to help the scare. The number of points awarded is based on the individual guest; some guests are easily frightened and others huddle stubbornly inside their room. Any guests who were not scared away begin to ‘calm down’ before the start of the next night (round), any dice on these remaining guests are turned down one pip, making your work a bit harder the next turn.

Before refilling each empty room at the end of the round, you can purchase up to two different cards by spending your hard earned points. Terror bonus cards allow you to roll additional dice each turn (though you can still only select three for the round), Scare Tactics have phobia symbols, which can be played on a matching guest to double one die’s contribution to the scare, and Spookie Favours grant special abilities, such as breaking the orthogonal movement rules or blocking others from placing dice. 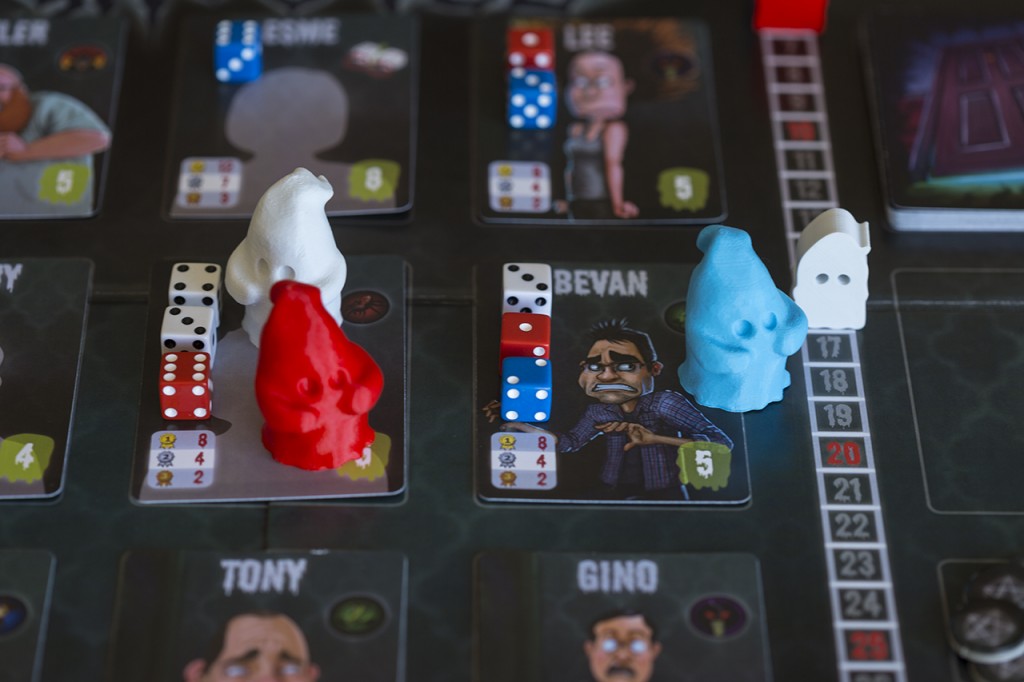 Ghostel offers an interesting take on the dice as workers mechanic. The theme is very accessible to all types of players and is not one that shows up in a hobby that is inundated with zombies. The prototype we received contained very cool 3D-printed player ghosts that have been a hit with everyone in our group. There are a few guest card that have completed artwork and they are absolutely fantastic. Adding to the fun, some guests can be picked out as parodies from pop culture icons. The ghost score markers were a little too big for the score track, leading to some jostling during the game, but it was not a huge deal.

The gameplay itself offers a number of strategic decisions on where to place your limited supply of dice each round. Trying to determine a good path to take and anticipate where your opponents may go is key to success. There are several opportunities to mitigate your rolls if you can pick up the right cards, but for the most part you can feel stuck with what you roll. If you roll horribly, like me, it is important to unlock the terror bonus cards early so you have additional dice to roll and choose from during each round.

Player interaction comes in many different forms, and while one might expect a measure of ‘take-that’ style play from a title such as this, one of the things that stood out during my plays with the League was the restraint used with that mechanic. Playing a Favor card to lock people out of a room seems to be the only true way of really screwing with your opponents plans. Of course, a well-timed Phobia combo might well snatch the first-place award away, and isn’t that all the more chilling than simply saying ‘no’? Other moments of conflict may come as someone unexpectedly comes up with a six to place on one of the higher scoring guests, or you may be forced to work together with an opponent in hopes of jointly terrifying an especially courageous tenant. Still, players are often busy plotting out their moves each round which can limit the table talk. To be fair, this seems to be the case with our group and most majority-placement games. To add to the above, some other unique ideas, like having some of the guests be face down or including some additional interactive card abilities could be a welcome addition to such a light-hearted game.

On the flip side, I was able to play a two-player game with my wife and there was plenty of fun to be had. The rules suggest that with two-players, each player should fully control two ghosts, with two sets of cards and dice each. That seemed to be a little bit too much to throw at her on her first play, so we stuck with one ghost each and it worked out just as well as a three or four player game. It was nice to see the versatility with the different player counts.

I think the sweet spot for Ghostel is for new gamers and families. The light-hearted theme can draw new players in and keep them interested. The seasoned gamer will come to appreciate the dice placement mechanics of the game, but for them, Ghostel may not have the staying power as other games with similar mechanics.

Ghostel is a light-hearted area majority game that provides a nice introduction to the mechanism, but doesn’t push the boundary much further. The great thing about Ghostel is its accessibility. As Steve pointed out in his review, the game will easily succeed with families and casual gamers. It’s an enjoyable and thematic way to introduce the idea of competing over control for different areas and gives a digestible amount of variation with the three different types of ability cards.

Where it hits a muon trap is in its longevity. After a few plays, it just didn’t have much to offer me – a player with 100+ games on my shelf. For me in particular, as a fan of area control games, this subset of tabletop games has a number of other titles that take the genre further, with standout mechanics and ideas.

As with any game purchase, take a look at your collection and see if there is a slot for Ghostel, a family-weight area majority game. The theme, artwork, and planned component inclusions surely won’t disappoint.

There’s a quirky and enjoyable idea at the base of Ghostel (And that name is brilliant in a terrible, punny way, mind you), and I believe this game would be a hit with the right sort of players. I was only able to get this game to the table once, so this is a first-impression sort of ruling.

There is, oddly, a decent amount of tactical thought that needs to go into your turn; do you think that you can scare a guest all by yourself, or do you really need an opponent to come over and lend a scream during the night? And, if they do, are they going to try and one-up you to steal Spookie’s approval? I did like the fact that anyone who places a die is allotted at least a few points from a scare, meaning your low-valued dice at least let you sneak in and leech some participation points off from a frightened guest.

Ghostel is currently funding over on Kickstarter. Head on over to the campaign page to purchase your own copy.